Mission San Juan Capistrano, the Jewel of the Missions 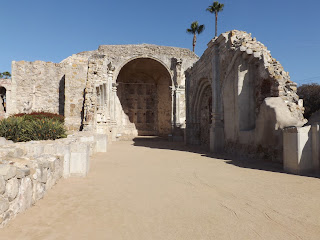 Called the "Jewel of the Missions," Mission San Juan Capistrano was first founded by Father Lasuen, on October 30, 1775, the seventh of twenty-one missions to be founded in Alta California. It was named for Giovanni da Capistrano, a 15th-century theologian and "warrior priest" who resided in the Abruzzo region of Italy.  But just a few weeks after the party of padres and soldiers arrived, they received word of the revolt occurring in San Diego. The founding padres, and soldiers decided to leave San Juan Capistrano, and go back to San Diego to help there. Once things had settled in San Diego, Father Serra personally led a party to re-found Mission San Juan Capistrano on All Saints Day, November 1, 1776.


For over the next 30 years, Mission San Juan Capistrano grew in population, buildings, livestock, and prominence. The Criolla or "Mission grape," was first planted at San Juan Capistrano in 1779; in 1783, the first wine produced in Alta California emerged from the Mission's winery. Both red and white wines (sweet and dry), brandy, and a port-like fortified wine called Angelica were all produced from the Mission grape.  By 1806, Mission San Juan Capistrano had a population of over a 1,000 people, over 10,000 head of cattle, and a completed architectural gem, The Great Stone Church (the only mission chapel building in Alta California not constructed out of adobe). 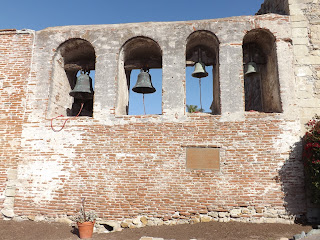 After 1812, the Mission began to decline. Many factors were involved in the Mission’s decline including the earthquake in December of 1812 which caused the Great Stone Church to collapse, the decline in birth rate, the increasing mortality rate of the population due to disease, and the inability of Spanish government to adequately protect and supply the Missions with needed goods.


On December 14, 1818, the French privateer Hipólito Bouchard, sailing under the flag of the "United Provinces of Rio de la Plata" (Argentina), brought his ships La Argentina and Santa Rosa to within sight of the Mission; aware that Bouchard (today known as "California's only pirate") had recently conducted raids on the settlements at Monterey and Santa Barbara, Comandante Ruíz had sent forth a party of thirty men (under the leadership of a young Spanish lieutenant named Santiago Argüello) to protect the Mission.  "Pirata Buchar" (as he was referred to by the Californios) ordered an assault on the Mission, sending some 140 men and two or three violentos (light howitzer cannon) to take the needed supplies by force. The Mission guards engaged the attackers but were overwhelmed; the marauders looted the Mission warehouses and left minor damage to several Mission buildings in their wake, and reportedly set fire to a few of the outlying straw houses.


Reinforcements from Santa Barbara and Los Angeles, led by Comandante Guerra from El Presidio Real de Santa Bárbara, arrived the next day to no avail as the ships had already set sail. 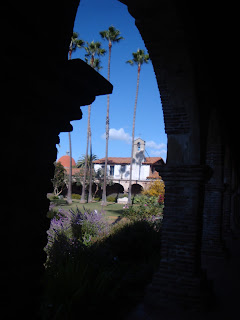 By 1821, Mexico won its independence from Spain, which made Alta California a territory of Mexico. Under new governmental direction, the Mission faced continued decline. Soon after the decree of secularization, the land holdings of Mission San Juan Capistrano were divided and sold to 20 prominent California families. In 1845, Governor Pio Pico sold the mission at auction to John Forster, Pico’s brother-in-law, for $710, when it was valued to be worth more than $54,000. For the next 20 years the Mission was a private ranch property of the Forster family. 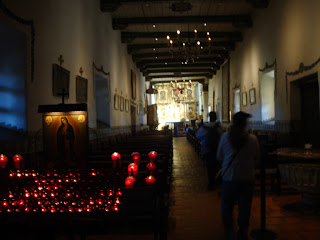 San Juan Capistrano has the distinction of being home to the oldest building in California still in use, a chapel built in 1782. Known alternately as "Serra's Chapel" and "Father Serra's Church," it is the only extant structure where it has been documented that the padre Junipero Serra celebrated mass.  The reredos and altar of Serra's Chapel are made of cherry wood and covered with gold leaf. They originated in Barcelona, Spain and are about three hundred years old. The altar is adorned with fifty-two angels faces, one for every Sunday of the year.
The arrival of the cliff swallows to the Mission every March 19th is world renowned. Swallows migrate 6,000 miles from Goya, Argentina to San Juan Capistrano in large groups. Some cliff swallow colonies number more than 3,500 nests.  At dawn on St. Joseph’s Day, the little birds arrive and begin rebuilding their mud nests, which are clinging to the ruins of the Great Stone Church of San Juan Capistrano. The arches of the two story, vaulted Great Stone Church were left bare and exposed, as the roof collapsed during the earthquake of 1812.  After the summer spent within the sheltered walls of the Old Mission in San Juan Capistrano, the swallows take flight again on the Day of San Juan, October 23rd.


Learn more about the missions and other great places to visit along the coast in “Along the King’s Road: A Guide to Touring the California Missions.”  Get your copy here.
Posted by Meredith Cherry on November 05, 2015