The 21 California missions were the first permanent European settlements to be founded on the West coast, beginning in 1769. 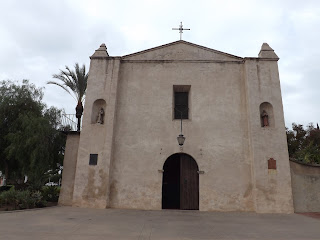 The mission was founded on the Feast of the Birth of Mary, September 8, 1771, as the fourth of the Alta California missions.  San Gabriel Arcángel, named after the Archangel Gabriel and often referred to as the "Godmother of the Pueblo of Los Angeles", was designed by Father Antonio Cruzado, who hailed from Córdoba, Spain. Cruzado gave the building its strong Moorish architectural influence. The capped buttresses and the tall, narrow windows are unique among the missions of the California chain.


Legend has it that the founding expedition was confronted by a large group of native Tongva peoples whose intention was to drive the strangers away. One of the padres laid a painting of "Our Lady of Sorrows" on the ground for all to see, whereupon the natives, designated by the settlers as the Gabrieliños, immediately made peace with the missionaries, because they were so moved by the painting's beauty.  Today the 300-year-old work hangs in front of and slightly to the left of the old high altar and reredos in the Mission's sanctuary. 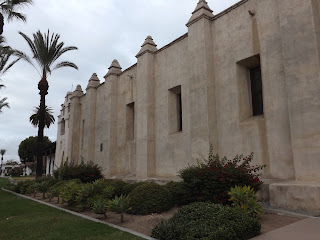 The planned site for the Mission was along the banks of the Río de los Temblores (the River of the Earthquakes—the Santa Ana River). The priests chose an alternate site on a fertile plain located directly alongside the Rio Hondo in the Whittier Narrows.  The site of the Misión Vieja (or "Old Mission") is located near the intersection of San Gabriel Boulevard and Lincoln Avenue in Montebello (known to the natives as Shevaanga). In 1776, a flash flood destroyed much of the crops and ruined the Mission complex, which was subsequently relocated five miles closer to the mountains in present-day San Gabriel (the native settlement of 'Iisanchanga). The Mission is the base from which the pueblo that became the city of Los Angeles was sent.


The 1812 Wrightwood earthquake caused the three-bell campanario, located adjacent to the chapel's east façade, to collapse. A larger, six-bell structure was subsequently constructed at the far end of the capilla. 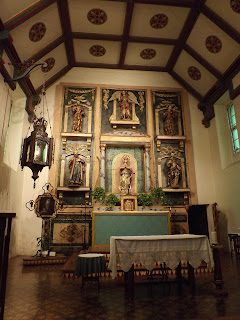 Over 25,000 baptisms were conducted at San Gabriel between 1771 and 1834, making it the most prolific in the mission chain. In its heyday it furnished food and supplies to settlements and other missions throughout California. Starting with only 128 animals in 1772, the mission herd reached 42,350, primarily cattle (25,000) and sheep (15,000) at its peak in 1829.  Over its active life San Gabriel was far more productive than any other mission in California, harvesting over 353,000 bushels of wheat, barley, corn, beans, peas, lentils and garbanzos (chickpeas).  San Gabriel had the largest vineyard in Spanish California and was the botanical source of many of the vines planted in the other missions.


A majority of the Mission structures fell into ruins after it was secularized in November 1834.  In 1846, what remained of the mission estate was granted to a Messieurs Reid and Workman on the condition that they pay all remaining claims to the mission creditors and support the mission's padres without obstructing community access to the church. The title granted to Reid and Workman was deemed invalid by the U.S. Land Commission in 1855, and the property returned to the Church in 1859. The Mission's chapel functioned as a parish church for the City of San Gabriel from 1862 until 1908, when the Claretian Missionary Fathers came to San Gabriel and began the job of rebuilding and restoring the Mission. 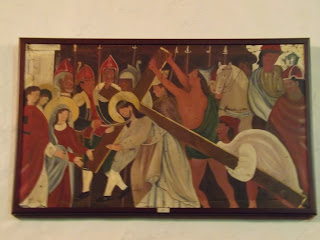 The museum has recently been reorganized and expanded,  largely due to the efforts of volunteer docent “Santa John.” Santa John is himself a San Gabriel treasure (as well as a registered “beared Santa”); be sure to talk to him if he is there while you are visiting! 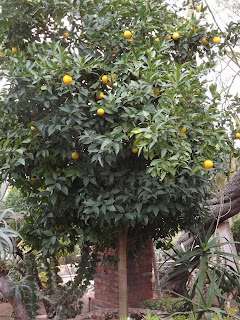 Learn more about the missions and other great places to visit along the coast in “Along the King’s Road: A Guide to Touring the California Missions.”  Get your copy here!