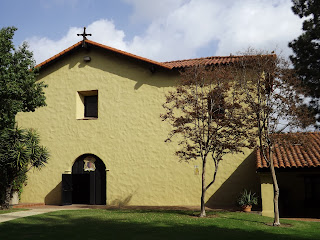 Mission San Fernando Rey de España (named for Saint Ferdinand, King of Spain in the 13th century) was founded on September 8, 1797 by Father Fermín Lasuén, making it the fourth mission site he had established in as many months; it was the seventeenth of the Alta California missions. The prime location the padre selected, located along the principal highway leading to the Pueblo de Los Angeles, had been occupied by Francisco Reyes (then Los Angeles' mayor). However, after brief negotiations construction of the first buildings was soon underway (Mission records list Reyes as godfather to the first infant baptized at San Fernando). 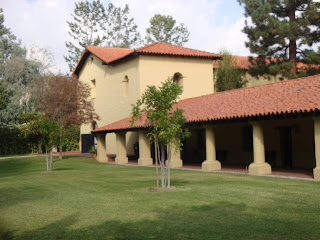 The mission was constructed in a traditional quadrangle.  A large hospice called the Convento, or Long Building, branched off the quadrangle; built in 1822, it served as the padre's quarters and as a guest-house. A colonnade with nineteen arches borders the full length of the building, which measures 243' x 50'. The current simple mission church is an exact replica of the 3rd church completed in 1806 and destroyed by an earthquake in 1971.  The elaborate altar, reredos and pulpit are carved from walnut and date to 1687. They were originally installed in the chapel of St. Philip Neri at Ezcaray, Spain.


On March 8, 1842 Francisco Lopez, a majordomo on one of the mission ranches, discovered gold particles clinging to the roots of wild onion bulbs in Placerita Canyon. The gold petered out in four years, but this was the earliest gold strike in California. For years thereafter, treasure seekers dug up the mission's adobe walls and floors to find the gold they mistakenly thought the padres had hidden. 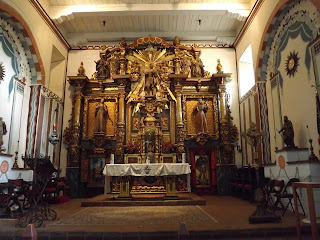 In 1846, Governor Pío Pico made Mission San Fernando his headquarters as Rancho Ex-Mission San Fernando. The Mission was utilized in a number of ways during the late 19th century: north of the mission was the site of Lopez Station for the Butterfield Stage Lines; it served as a warehouse for the Porter Land and Water Company; and in 1896, the quadrangle was used as a hog farm. San Fernando's church became a working church again in 1923 when the Oblate priests arrived. In the 1940s, the Mission was finally restored. Later, the 1971 San Fernando earthquake damaged the church, which had to be completely rebuilt. The repairs were completed in 1974. It continues to be very well cared for and is still used as a chapel-of-ease. In 2003 comedian Bob Hope was interred in the Bob Hope Memorial Gardens.


A hundred pound bell was unearthed in an orange grove near the Mission in 1920. It carried the following inscription (translated from Russian): "In the Year 1796, in the month of January, this bell was cast on the Island of Kodiak by the blessing of Archimandrite Joaseph, during the sojourn of Alexsandr Baranov." It is not known how this Russian Orthodox artifact from Kodiak, Alaska made its way to a Catholic mission in Southern California.  It is believed by some that the bell originated with Nikolay Petrovich Rezanov's 1806 Russian trading expedition to Alta California. 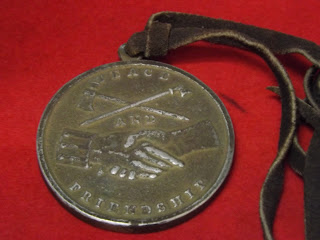 The museums here are the most bizarre of all the missions, but also contain some unique artifacts such as a Remington statue and a medallion given to a Native American tribe by the Lewis and Clark expedition (pictured at left).


Learn more about the missions and other great places to visit along the coast in “Along the King’s Road: A Guide to Touring the California Missions.” Get your copy here!
Posted by Meredith Cherry on November 03, 2015