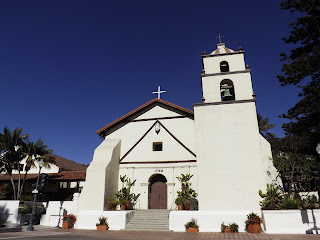 Father Serra raised the Cross at "la playa de la canal de Santa Barbara" (the beach of the Santa Barbara Channel) on Easter Morning, March 31, 1782. Assisted by Padre Pedro Benito Cambon, he celebrated a High Mass, preached on the Resurrection, and dedicated a Mission to San Buenaventura (named for Saint Bonaventure, a 13th century Franciscan cardinal and renowned philosopher). It had been planned as the third in the chain of twenty-one Missions founded by Padre Serra but was destined to be the ninth and last founded during his lifetime, and one of six he personally dedicated. 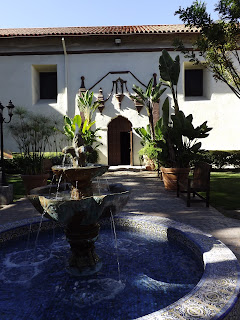 A system of aqueducts were built by the Chumash between 1805 and 1815 to meet the needs of the Mission population and consisted of both ditches and elevated stone masonry. The watercourse ran from a point on the Ventura River about ½ mile north of the remaining ruins and carried the water to holding tanks behind the San Buenaventura Mission, a total of about 7 miles.  The entire water distribution system was destroyed by floods and abandoned in 1862.  Part of the aqueduct and early mission remnants can be seen at the Mission Plaza Archaeological Site at 113 Main St, and further up the hill on Valdez Alley.  The most notable feature here is “El Caballo” (the horse), a horse-shaped water spout that was part of the original aqueduct.


The Mission’s first church building was destroyed by fire. The construction of a second church was abandoned because "the door gave way." In 1792 work was in progress on the present church and the small utility buildings which (with the church) formed a quadrangle enclosing a plaza. Although half finished in 1795, the church was not completed until 1809. Dedication was held September 9 of that year and the first liturgical services took place September 10. 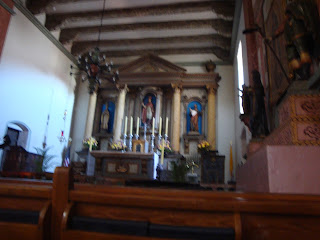 A series of earthquakes and an accompanying tidal wave in 1812 forced the padres and Indian neophytes to seek temporary shelter a few miles inland. Six years later the padres and their flock had to remove sacred objects from the church and flee into the hills to elude a pirate who was pillaging the Missions but fortunately was headed off after a "bargaining session" at El Refugio in Santa Barbara.


After secularization, in 1845 San Buenaventura Mission was rented to Don Jose De Amaz and Narciso Botello and was later illegally sold to Don Jose De Amaz. After California became a state of the Union, Bishop Joseph Sadoc Alemany petitioned the United States Government to return that part of the Mission holdings comprising the church, clergy residence, cemetery, orchard, and vineyard to the Catholic Church.


Because of severe earthquake damage in 1857 the Mission’s tile roof was replaced by a shingle roof.  In 1893, Father Cyprian Rubio "modernized" the interior of the church, painting over the original artwork; when he finished, little of the old church was untouched. The windows were lengthened, the beamed ceiling and tile floor were covered, and the remnants of the quadrangle were razed. The west sacristy was removed to provide room for a school, which was not actually built until 1921. During the pastorate of Father Patrick Grogan the roof of the church was once again tiled, the convent and present rectory were built, and a new fountain was placed in the garden. 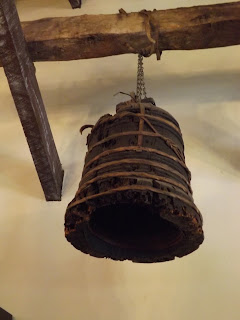 In a major restoration under the supervision of Father Aubrey J. O’Reilly in 1956-1957 the windows were reconstructed to their original size, and the ceiling and floor were uncovered. A long-time parishioner commissioned the casting of a bell with an automatic angelus device and donated it to the Mission; it hangs in the bell tower above the four original hand-operated bells.  The museum contains the original doors, and two original wooden bells which were used during Holy Week.


Outside of the current mission walls, the Ventura historic district offers many mission-related sites.  Directly across the street is the Mission Gardens and Moreton Bay Fig Tree, listed on the National Register of Historic Places.  This park used to be part of the extensive mission gardens.  The adobe walls and lion’s head fountain are from the mission period, and the garden includes orange trees from the original mission.  The mission’s lavenderia is located in the basement of the Peirano’s Market,  which was built over the site in1877. 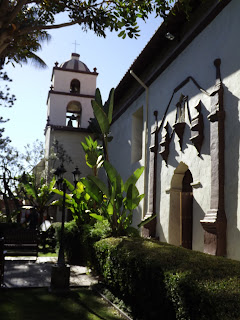 Learn more about the missions and other great places to visit along the coast in “Along the King’s Road: A Guide to Touring the California Missions.” Get your copy now!
Posted by Meredith Cherry on November 02, 2015