Santa Barbara, the queen of missions 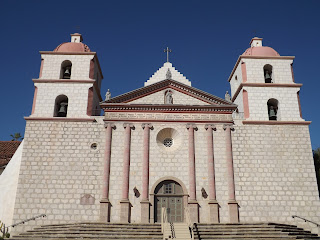 The Santa Barbara Mission was established on the Feast of Saint Barbara, December 4, 1786 by Padre Fermín Lasuén (who had taken over the presidency of the California mission chain upon the death of Father Presidente Junípero Serra) and was the tenth of twenty-one California Missions to be founded in Alta California.  It is called “The Queen of the Missions.”  Mission Santa Barbara is the only mission to remain under the leadership of the Franciscan Friars since its founding, and today is a parish church of the Archdiocese of Los Angeles.  Mission Santa Barbara's name comes from the legend of Saint Barbara, a girl who was supposedly beheaded by her father for following the Christian Faith.


The early missionaries built three different chapels during the first few years, each larger than the previous one. It was only after the great Santa Barbara Earthquake on December 21, 1812, which destroyed the existing buildings, that the construction on the current Mission was begun. It was completed and then dedicated in 1820. The towers were considerably damaged in the June 29, 1925 earthquake, but were subsequently rebuilt in 1927. The appearance of the inside of the church has not been altered significantly since 1820. 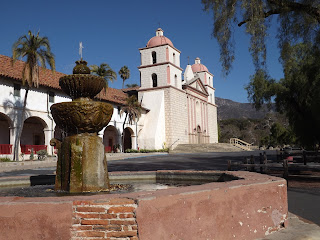 Many elements of the Mission's extensive water treatment system, all built by Chumash Indians' labor (including aqueducts, two reservoirs, and a filter house) remain to this day, as does a grain mill; the larger reservoir, which was built in 1806 by the expedient of damming a canyon, has been incorporated into the City's water system. The original fountain and lavadero are also intact near the entrance to the Mission.  The lavandaria end spout is a neophyte-carved Cougar's head and is the oldest public sculpture in the state of California.


In 1818, two Argentine ships under the command of the French privateer Hipólito Bouchard approached the coast and threatened the young town of Santa Barbara. The padres armed and trained 150 of the neophytes to prepare for attack. With their help, the Presidio soldiers confronted Bouchard, who sailed out of the harbor without attacking.


After secularization in 1833 Father Presidente Narciso Durán transferred the missions' headquarters to Santa Barbara, thereby making Mission Santa Barbara the repository of some 3,000 original documents that had been scattered through the California missions. 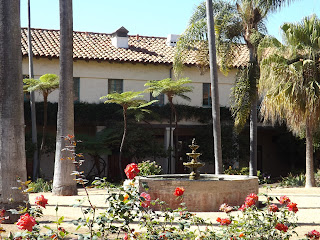 
Learn more about the missions and other great places to visit along the coast in “Along the King’s Road: A Guide to Touring the California Missions.” Get your copy today!