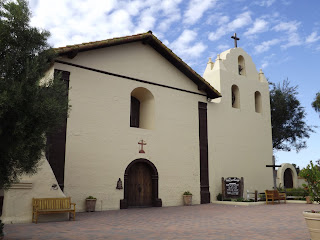 Founded on September 17, 1804 by Father Estévan Tapís, the mission site was chosen as a midway point between Mission Santa Barbara and Mission La Purísima Concepción, and was designed to relieve overcrowding at those two missions and to serve the Indians living east of the Coast Range. It was named Mission Santa Inés Virgen y Martír, for Saint Agnes of Rome, a thirteen year-old Roman girl martyred in A.D. 304.  It was the 19th mission to be founded in Alta California.


Most of the original church was destroyed on December 21, 1812 in an earthquake centered near Santa Barbara that damaged or destroyed most of California's missions. The quake also severely damaged other Mission buildings, but the complex was not abandoned.  A new church was dedicated on July 4, 1817.  During 1814 to 1816, a large adobe wall was constructed to hold two bells. New bells were cast in Lima, Peru, and the formal dedication took place on July 4, 1817. The bell wall lasted until 1911 when a huge rainstorm literally melted it. When Father Buckler had it rebuilt the following year, a third bell arch was added. 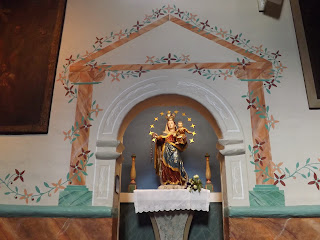 
In 1843, California's Mexican governor granted 34,499 acres of Santa Ynez Valley land to the first Bishop of California, who established at the Mission the College of Our Lady of Refuge, the first seminary in California. The college was abandoned in 1881; by then the Mission was disintegrating. A family lived there in the 1890s and did some repairs, but much of the complex collapsed in 1894.  The Danish town of Solvang was built up around the Mission proper beginning in 1911. It was through the efforts of Father Alexander Buckler in 1904 that reconstruction of the Mission was begun. 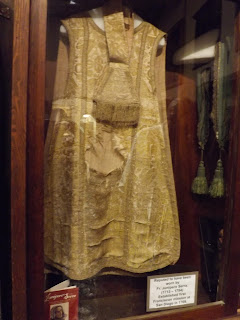 Mission Santa Inés has the largest and most valuable collection of early California church vestments from the 15th century to 1718, having been the depository for vestments from the earlier successful Missions in Baja California and Mexico. Many of the more than 500 silk vestments throughout the California Missions are in fact older than the Missions themselves. Mission Santa Inés also has a vestment worn by Father Serra. That the vestments have been so well preserved is a tribute to the work of Mamie Goulet, the niece of Father Alexander Buckler, who dedicated 20 years to preserving the mission’s art and artifacts.

Learn more about the missions and other great places to visit along the coast in “Along the King’s Road: A Guide to Touring the California Missions.” Get your copy today!
Posted by Meredith Cherry on October 30, 2015