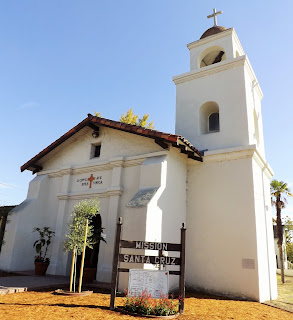 The mission was founded on August 28, 1791 by Padre Fermin Lasuen, and named for the feast of the Exultation of the Cross.  The mission was flooded as the San Lorenzo swelled with the rains that winter. Over the next two years, the padres set out to rebuild the mission on the hill overlooking the river. The night of December 14, 1793, Mission Santa Cruz was attacked and partially burned by members of the Quiroste tribe who inhabited the mountains to the east of Point Año Nuevo. The attack was purportedly motivated by the forced relocation of Indians to the Mission.  The mission was looted in 1818 by the residents of the nearby pueblo of Branciforte after the mission's inhabitants fled under threat of pirate attack by Hypolite de Bouchard.  The front wall of the adobe mission, built in 1794, was destroyed by earthquakes in 1857. A wooden facade was added and the structure converted to other uses.


Santa Cruz ranked in the bottom 25% of the California Missions in the size of its livestock herd (9,236 in 1832).  Approximately 75,000 bushels of grain and produce were produced over the active life of the mission. 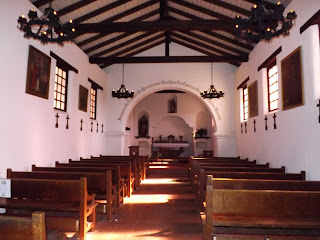 The current Gothic-style Holy Cross Church was built on the site of the original mission church in 1889, and it remains an active parish of the Diocese of Monterey. In 1931, Gladys Sullivan Doyle proposed to construct a half-size replica of the original Mission next door to the modern church. She contributed all of the construction costs, on the condition that she would be buried inside. Her grave can be viewed in a small side room. The small replica chapel is mainly used for private services for the Holy Cross Church. An adjoining room functions as a gift shop. A stone fountain from the original mission complex stands in the garden behind the gift shop.  The original mission church, whose bell tower collapsed in 1840, contained nine or ten bells, none of which have survived. The mission replica has a 20th century bell hanging in tower.


Today's Plaza Park occupies the same location as the original plaza, at the center of the former Mission complex. The complex at one time included as many as 32 buildings. The first autopsy in California was performed at this mission on Fr. Andres Quintana in 1812, to determine the cause of his death (the neophytes were suspected of having murdered him). 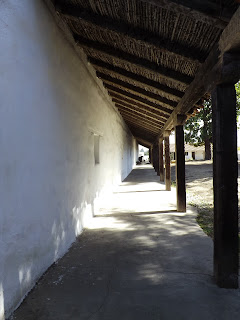 The only surviving Santa Cruz Mission building has been restored to its original appearance and functions as a museum of the Santa Cruz Mission State Historic Park: this portion of the adobe, built in the early 1800’s, had been Indian family housing, the only example of its kind still standing in California today.


Learn more about the missions and other great places to visit along the coast in “Along the King’s Road: A Guide to Touring the California Missions.” Get your copy!
Posted by Meredith Cherry on October 22, 2015