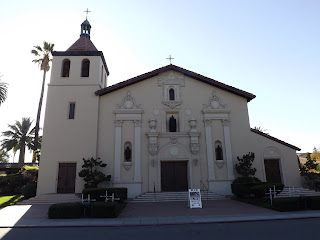 On Jan. 12, 1777, Father de la Peña said the first Mass at the new Mission Santa Clara de Asís (though at this point the mission consisted only of a cross and a makeshift altar under a tree).  A few days later, Father Murguía arrived from Monterey with the supplies and religious articles.   Mission Santa Clara was the the eighth mission to be founded in California.  The mission was named for Saint Claire of Assisi, a 13th century Italian nun, cofoundress with Saint Francis of the Order of Poor Clares.  It is located in Santa Clara, on what is now the campus of Santa Clara University.


By the end of that year, the padres and their assistants had completed the church and the priests’ residence; another house was under construction. All the buildings were of upright logs with dirt roofs.  This promising beginning, however, was wiped out in a year later when the Guadalupe River overflowed its banks. Although they valued the river as a water source, Peña and Murguía realized that the flood danger made the mission’s location inadvisable. Salvaging everything they could, they moved to an interim site on higher ground to the south. Here they began again, setting up new log buildings and digging new irrigation ditches. Father Serra blessed the second, temporary, church on Nov. 11, 1779.


By 1781 they had found a permanent location for the mission: far enough away from the river to be safe from floods, but close enough to allow an irrigation canal to bring water to the fields. On Nov. 19, 1781, in an elaborate ritual, Father Serra blessed and laid a cornerstone for the third Mission Church. In a cavity in the cornerstone were placed a crucifix, religious images, and Spanish coins to signify the Church treasury. (The cornerstone was later accidentally found by a workman digging for a gas main along Franklin Street in 1911. The cornerstone and its contents are on display in the Mission Room of the University’s museum.)  The was completed 2 1/2 years later, in May 1784. Unlike the two previous temporary churches, which were built of wood, the permanent church was an imposing adobe structure 100 feet long, 22 feet wide and 20 feet high. The four foot thick adobe walls were whitewashed inside and out and decorated with a painted border on the interior. Unfortunately, Father Murguía, who had designed the church, died four days before the dedication ceremony, which was held May 15, 1784. Father de la Peña reported that "the celebration was carried on amid the ringing of bells, salutes from the muskets of the soldiers and with the fireworks on the Mission." The following day, Sunday, May 16, Father Serra celebrated the first Mass in the new church. 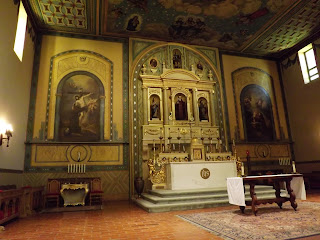 In 1818, the Mission Church suffered severe damage in an earthquake.  Construction of a new permanent mission compound at this final site began in 1822. The church, residences, workshops, and storerooms were laid out in a large quadrangle. (The only remaining structures from this period are now known as the Adobe Lodge, which houses the University’s Faculty Club, and the Adobe Wall. They formed the southwest corner of the square.) The new church was dedicated Aug. 11, 1825. This building, with various modifications, stood until 1926.


Mission Santa Clara was secularized Dec. 27, 1836.  It operated as a parish during the 1830s and 1840s.  In December of 1850, however, the new bishop of California, donated the buildings and land in order for the Santa Clara College to be founded. Over the next 70 years, the old buildings underwent successive renovations.  The final "remodeling" of the Mission Church occurred on Oct. 24, 1926, when faulty wiring set off a fire in the church’s north bell tower. A priest saying morning Mass gave the alarm, and students and faculty tried valiantly to save the historic old building. The church, sadly, was totally destroyed, although students did manage to rescue many statues and paintings, including one of the Holy Family that has hung in the Mission since 1889, other liturgical objects, and one of the mission bells, which rang the De Profundis for the dead that night, as it had for a hundred years. 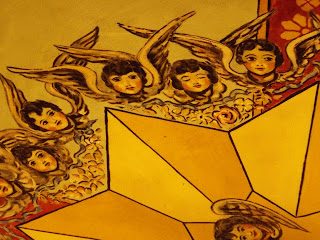 Encouraged by a flood of sympathy and donations, the University administration began reconstruction of the destroyed church almost immediately. Rather than a duplication of the church that had burned, the restoration attempted to recapture the appearance of the 1825 church before its many remodelings. The church was again made wider than the original because it had to serve as the University chapel. The façade, however, returned to its original one-tower design, although it was eventually embellished with carved wooden statues of the saints instead of painted decorations. The decorations of the interior also followed the original lines, except that the patterns on the walls were painted in pastel pink and blue instead of the original brilliant red and yellow. Careful copies were made of the destroyed Mexican reredos and Dávila’s painted ceiling. The current Schantz pipe organ was installed in 1975 and was a gift of Mr & Mrs. Foster McGraw (the original mission would not have contained any instruments, the Gregorian Chants sung there would have been without instrumentation).  It contains an original bell, as well as a replica of a bell given to the Mission by King Carlos IV.  The bells of Santa Clara have rung faithfully each evening since 1798 by request of King Carlos IV.


Learn more about the missions and other great places to visit along the coast in “Along the King’s Road: A Guide to Touring the California Missions.” Get your copy!
Posted by Meredith Cherry on October 21, 2015