Mission San Juan Bautista, a step back in time 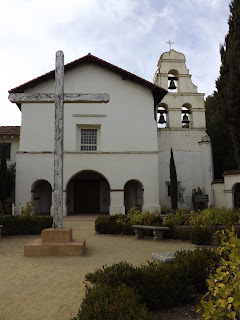 
The mission was built overlooking the San Andreas Fault. Construction of the present Church began in 1803 and continued for nine years. The sandstone foundation goes to a depth of five feet. The adobe walls are four feet thick.  It is the widest Church in the Mission chain. 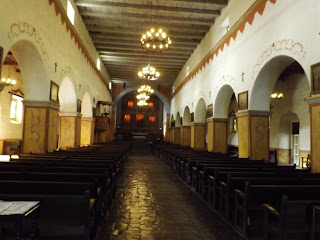 To the left of the Mission are the Padres’ living quarters and guest rooms. This building has since been converted into a museum, the rooms containing ecclesiastical vestments, Indian Relics, rare religious books and Victorian furniture of the latter Mission Era.  The mission's collection of books and art works are in many cases older than the mission. Some of the fine vestments in the museum are from China, Russia and Venice, and were used at the mission as recently as the 1930's.


Padre Esteban Tapis is buried in the sanctuary of the church. He was, at one time, Presidente of the Missions and he is founder of the Mission Santa Ines. When he retired from office he came to San Juan Bautista where his musical talents brought fame and a new name to San Juan, "the mission of music." Two of his handwritten choir books can be seen in the Museum. 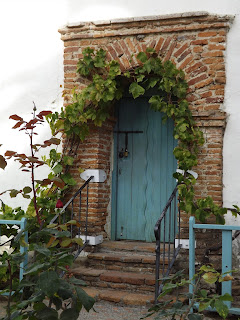 Interior completion of the church continued through 1817 when the floor was tiled and the main altar and reredos (which holds the six statues) were completed by Thomas Doak, an American sailor who jumped ship in Monterey. He painted the reredos in exchange for room and board.


There are animal prints in the tiles of the church floor that were made while the tiles were left outside to dry in the sun. Another unusual feature is the "Cat Door" carved into the blue side door in the Guadalupe Chapel. This allowed cats access at all times to catch mice.


In 1906, there was a violent earthquake that shook the greater part of central California. The side walls of the church collapsed. They were restored in 1976. Vestiges of the original El Camino Real can still be seen north of the cemetery.  The "convento" wing is all that remains of the quadrangle that had enclosed the gardens. The kitchen served 1,200 people three times a day.


The cemetery on the north side of the church contains the remains of over 4,000 Christian Native Americans and Europeans. Ascencion Solorzano, the last pure blooded Native American of this mission, is buried in the cemetery. Her grave is marked by a red cross and a plaque has been placed on the wall above her grave in her memory.


The Old Mission San Juan Bautista has had an unbroken succession of pastors since its founding.  This is one of the few missions that has been an active church since its founding, and many of its visitors come for worship, not sightseeing. 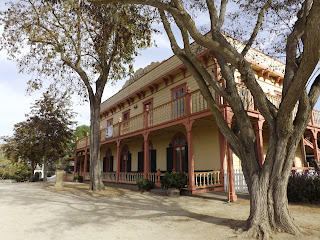 San Juan Bautista offers the best opportunity to see and appreciate the California of 160 years ago. There are some 30 historic buildings in the 12-block area surrounding the Spanish Plaza (the only original one remaining in the state) including the Mission's original adobe manjerio (nunnery), since renamed Plaza Hall, the fomer cuartel (Soldier's barracks) retrofitted by Angelo Zanetta in 1858 as the Plaza Hotel, a one room jail, a stagecoach livery stable, and a pioneer’s log cabin.


Learn more about the missions and other great places to visit along the coast in “Along the King’s Road: A Guide to Touring the California Missions.” Get a copy here!
Posted by Meredith Cherry on October 23, 2015