Mission San Rafael Arcangel, the most obliterated of missions 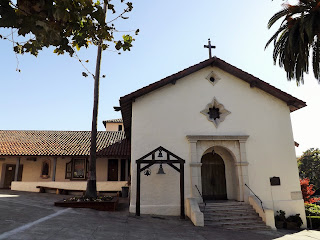 Mission San Rafael Arcangel, the 20th of the California missions, was established on December 14, 1817 to assist Mission Dolores, which was needed due to a terrible outbreak of disease among the indigenous peoples at Missions Dolores, San Jose and Santa Clara. Over 200 native Americans and four Franciscan friars traveled across the bay to found this as a hospital mission whose patron is Arcangel Rafael, the healing messenger. 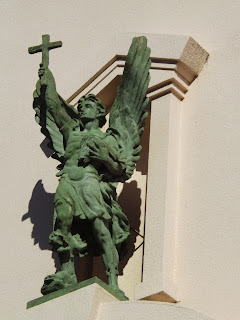 Asistencia San Rafael became an active farm and ranch on the northern edge of New Spain. The simple buildings, its orchards, farmlands and herds of livestock quickly grew and improved, leading to the ranking of the asistencia as mission in its own right by 1822.


No effort was made to build a full complex. The initial building was a structure that measured 87 feet in length and 42 feet in width. It contained a hospital, chapel, padre's quarters and a storage area. It did not have a bell tower, so its three bells hung from cross beams erected in front of the chapel.  There was no quadrangle or plaza as most missions had. The chapel itself was simple and had only dirt floors. 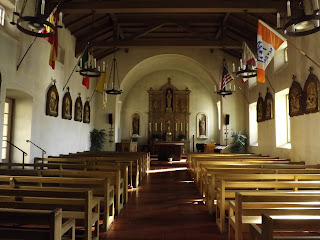 The peak mission population was 1,051, in 1826. By 1832 the mission had 2,120 cattle, 3,000 sheep, 370 horses, and 2 hard-working mules.  In its short mission life of 17 years, San Rafael had a relatively high agricultural output of approximately 97,000 bushels of grain and produce. The mission had extensive vineyards and orchards, and was noted for the excellence of their pears.  San Rafael also maintained a substantial boat building operation, since boats were required to facilitate travel across the bay.


San Rafael was badly damaged in an Indian attack led by Chiefs Marin and Quintin in February, 1829. Loyal indigenous residents saved the life of the mission padre, Fr. Juan Amoros, by hiding him in the marshes.


The mission’s first overseer, a Miwok Indian baptized “Marino,” is buried beneath the parking lot of the mission and modern church complex.  Some conjecture that Marin County is named for this man. 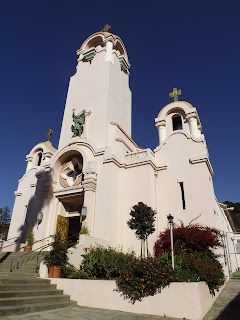 Mission San Rafael was the first mission to be secularized in 1834. The chapel then became the parish church for local ranchers. In 1846 The Bear Flag Revolt spread to San Rafael. General John C. Fremont captured the Mission and used it as headquarters for the United States military forces, and used the Chapel as a stable.


California was admitted to the Union in 1850. Marin County was one of the original 27 counties. For a time, county activities took place in the original Mission buildings. By 1861, the buildings had fallen into disrepair.  After the mission ruins were removed in 1870, all that remained of the old mission site was a solitary pear tree. It is for this reason that San Rafael is known as the "most obliterated of California's missions."


The modern day Mission “replica” was constructed in 1949 with a grant from the Hearst Foundation. The museum contains artifacts, paintings and other objects.  This is the smallest of all mission museums, occupying just a corner of the gift shop, but it contains several important artifacts including three of the original bells from Mission San Rafael Arcangel.


Learn more about the missions and other great places to visit along the coast in “Along the King’s Road: A Guide to Touring the California Missions.” Get your copy!
Posted by Meredith Cherry on October 18, 2015