Making our way through PA 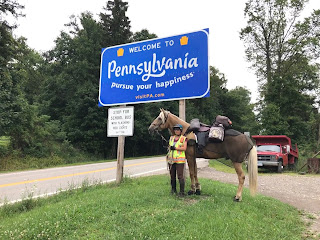 Pennsylvania was our 28th state, and what a state it was! While it was a nice change of scenery to have finally left the mostly-flat midwest, the many hills of western PA were certainly challenging.  Yet almost every day brought new breathtaking scenery and super friendly people. 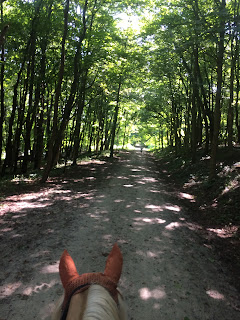 We started out in Washington County, southwest of Pittsburgh.  I was able to take a beautiful rail trail (Montour Trail) for part of two days.  It was so peaceful riding through the forest! 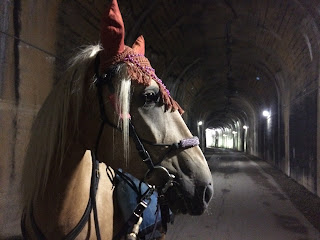 Along the Montour Trail, Apollo went through his first tunnel! Just to be on the safe side, I led him through it, but he was just fine. We went through two more tunnels further down the trail, which I was able to calmly ride him through. Even after so many miles, we still come across new experiences! 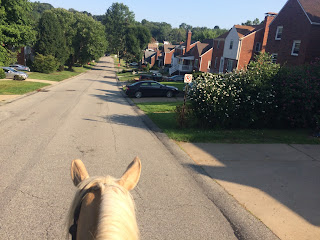 Pittsburgh area is very hilly, and I spent the whole day hoping on and off of Apollo for the steepest of the many hills.  I imagine if an ant were walking on bubble wrap, it would feel about the same for the amount of ups and downs. Apollo and I rode through a lot of neighborhoods that looked like this, with red brick houses perched on the side of the hills. 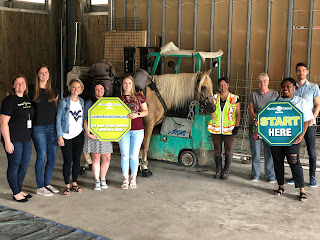 In Pittsburgh (yes, in the city), we stopped to visit the Center for Victims.  What a great shelter! They help domestic violence victims, but also any other victims of violence. They have a lot of awesome services available, including several therapy dogs on staff! 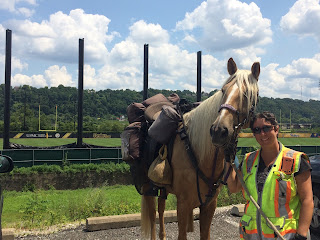 Here we are outside the Steelers’ training field, on the south side of Pittsburgh! 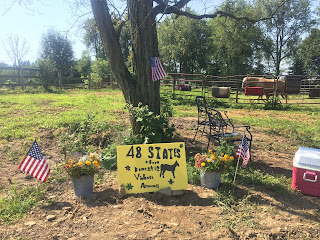 We stopped the next two days at Victory Stables, where I was invited to have a booth at their open house. 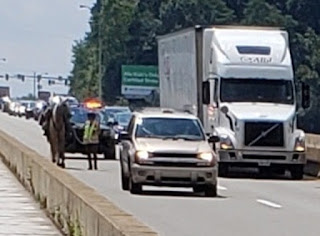 We had to get two police escorts in the greater Pittsburgh area (one in the city, and one on the Tarentum Bridge, pictured).  So much traffic! Good thing this was not our first rodeo! 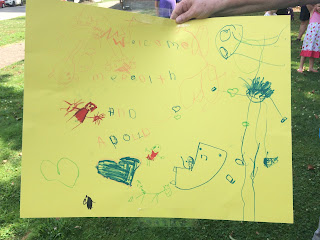 For the fourth day in a row, we stopped to do another event to talk about domestic violence and the ride.  The last of these stops was in Tarentum, in the northeast Pittsburgh area.  This was one of our best events ever, because it wasn’t just for the shelter staff and clients.... the whole community came out to attend! Several people from the local government, more from the HOPE Center, a few from law enforcement, and a bunch of townspeople who had heard about it.  The kids at the center made me this poster! 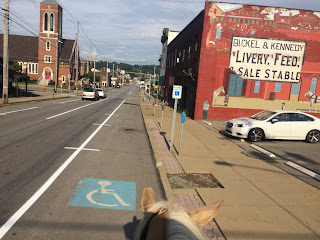 Once we finished with the Pittsburgh area, we rode north through more rural areas and a few smaller towns.  Here is the town of Butler, with an awesome horsey mural. 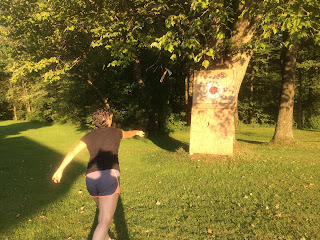 My most unusual experience in PA was learning to throw hatchets!  After a bit of practice and probably a lot of luck, I managed to get a bullseye.  This is way more fun than throwing darts! 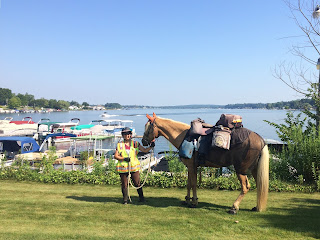 Here’s a pretty scene! We rode around Conneaut Lake, a very popular spot for boating. 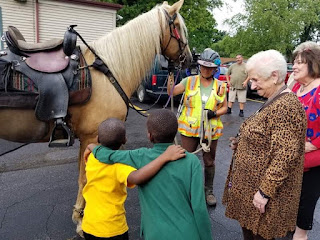 When we reached Erie, Apollo and I visited the kids, clients, and staff of SafeNet. This is one of my all-time favorite pictures from an event. 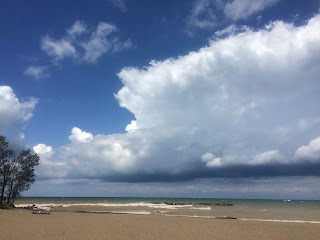 The northern edge of western PA - Lake Erie! If you’ve never seen the Great Lakes, there’s a reason they’re called great.  They are so big that they look like oceans, complete with waves. 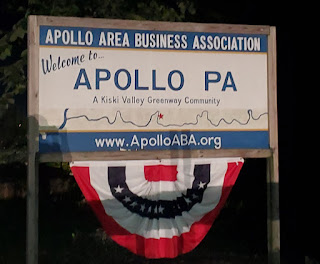 Apollo and I visited Apollo PA! Unfortunately I didn’t ride through the town so I couldn’t get a picture of him with the sign. Still, pretty cool. 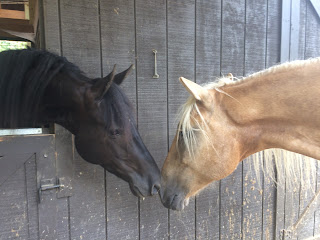 Apollo also met another horse named Apollo! “Polly” is a Morgan gelding. I’m sure they had lots to talk about. 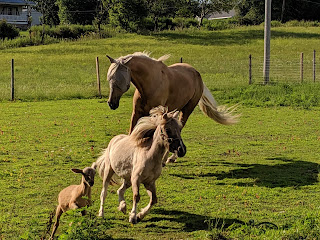 He made lots of other friends, as usual.  One of the most fun was a pasture he shared with a playful mini and a lamb. 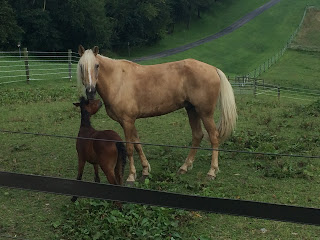 Of all Apollo’s new friends, he has never been so inseperable from any other as he was from his young mini friend shown here. That little guy followed Apollo everywhere, grazed nose-to-nose, and played together all weekend long.