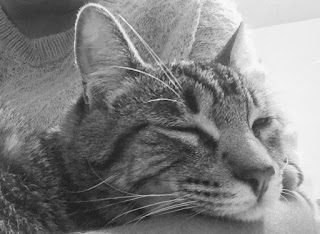 As many of you have noticed, Hermes’ carrier is no longer hanging on the side of Apollo’s saddle.

But first, for those of you who are new to following my journey....  who the heck is Hermes? 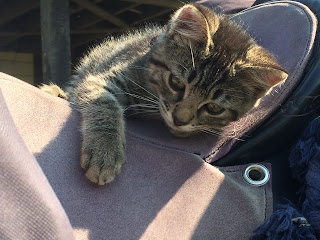 Almost exactly a year ago now, I was camped in the backyard of a nice family in Burley, Idaho.  They had recently found a tiny orphaned kitten, and were looking for a new home for him.  He was living under their back deck in the meanwhile, and when he saw me he instantly adopted me.  I was “mom,” and every time I appeared out of the house or the tent, he would try to suckle my bare toes or insist on napping on my lap.  How could I not take him when I left?

So I devised a system to carry and care for a kitten while traveling by horse.  He rode in a soft carrier that hung on the saddle, and would let me know when he needed a break to drink or potty.  When we stopped for the day, he would come out of his carrier for dinner, playtime, second dinner, and then bedtime. 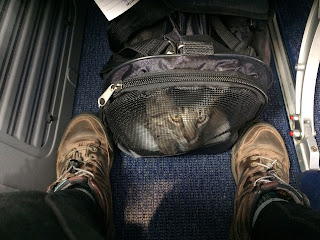 He even got to travel as my carry-on item on the plane ride home in the fall.  He was so used to riding in his carrier that he napped or watched me quietly the whole way, and the lady in front of me whose seat he was under didn’t even realize he was there until we all started getting up to deplane!

Over the winter he continued to grow, as kittens do.  By the time I was preparing to start this year’s ride, he had reached his first birthday and a grownup kitty size of 12 pounds.  Not only did he weigh too much to ask Apollo to continue to carry in addition to the standard gear (and of course me), he no longer fit in his carrier. 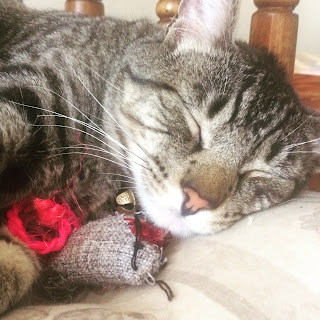 I thus made the hard decision to leave him with my family and their cat, Ben.  Hermes had settled into his new routine during the winter of eating, following Ben around, eating, napping, eating, chasing toy mice, eating, and napping.

He was a happy kitty, and had a huge yard to play in as well as all the food and toys he could want inside.  But sadly, one evening he did not come home.  Ben waited all night at the door for his new friend.  I contacted the microchip company where he’s registered, the neighbors, and the shelter, but it has been several weeks now without a sign of my adventure cat.

This is not the happy ending that I had been planning to write when I first started drafting this blog post earlier this year. Since so many of you have asked, I knew I’d need to answer the question “where’s Hermes?” But now I’m the one who is asking, too.
Posted by Meredith Cherry on August 15, 2018