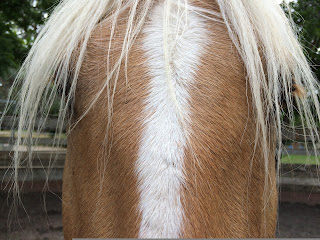 One day as I was riding down the road, somewhere in rural Washington state, a lady stopped me to offer water for Apollo. As he happily slurped down his bucket’s contents, she casually observed that his whorls were well placed for this sort of adventure.

How so? I asked her, intrigued.  And thus began my fascination with whorlology.

Whorls, also called swirls or a few other similar names, are the places where a horse’s hair makes a swirl pattern, much like a person’s cowlick.  All horses have them, but in different places and arrangements on their bodies.  It has been lore for ages that certain whorls indicate certain traits about the horse.  Until recently, many people assumed it was just that - lore.

But some 15 or so years ago, the renowned Dr. Grandin did some research on whether (and why) there may be some truth behind the idea.  Perhaps surprisingly (at least to me!) there was.  Whorls are formed in embryonic tissue at the same time that the brain and rest of the nervous system are developing, which may explain why some whorl patterns are well correlated with certain behavioral traits.

I spent some time looking Apollo over for his whorls.  It’s the sort of thing that a person can see every day and never really pay attention to, so it was fun to look at them in this new light.  Here’s what I found on him, and what it may reveal about his “personality.”

Face whorls are the most influential whorls on the body, and the easiest to observe.  Apollo has a single whorl on the high side of just-between-the-eyes.  Centered between the eyes indicates a balanced mind, and the higher the whorl the more high strung and active the mind.  Lower would indicate a sluggish personality.  Being just a tad higher than the eyes means he’s level headed but more than average energetic and active in his thinking. Obviously both good traits for a road traveling horse.

He has whorls under the throat latch but without whorls at the poll.  This tends to result in high head carriage.  Which definitely fits with my nickname for him of “giraffe.”

He does not have any particularly large or unmatched whorls on the rest of his body (unmatched would mean only on one side of the body), which is a good thing.   He does have a “wheat ear” on his chest, but not the unlucky variation of it.

In summary, I don’t know how much merit there is to whorlology, but it was fun to think about. I now catch myself examining other horses’ face whorls too!

To learn more about whorlology, check out this great article from Horsemanship Journal.