As you've probably heard by now, the plan was for me to be in the Dakotas or maybe even Minnesota by now.  Instead, I had to give Apollo a few more months to fatten up before we start riding for the year.  So instead of busy days of riding, I spent the month of May at home.

Not that having a long and unplanned vacation is a terrible thing! I’m calling it “retirement practice.”  Yeah, I may only be 35, but if practice makes perfect then I’ll be really good at it in a few decades.

I've been keeping myself as busy as ever with my "52 weeks of hands-on learning" personal goal/new year's resolution.  For previous months, click on this subject  in the sidebar on the right side of the screen.

So what did I do in May, I'm sure you've been wondering?  Quite a lot.  In fact, I've already started some of my June activities because with all this free time, I could devote myself to becoming more proficient before discussing them here (so you'll have to wait another month to hear about these longer activities).

The art of flintknapping is the old-fashioned method of handcrafting stone tools.  In my case, I took a class on making obsidian arrowheads and other obsidian tools.  Basically, it involves breaking tiny flakes of rock off of a bigger rock by brute force, until it is the size and shape you want.

For the beginners class, I received a "blank" that was preformed to the approximate shape (albeit a lot bigger than the final product), a piece of leather to protect my hand from the sharp rock edges that I would be forming, and the two tools necessary for breaking the rock.

It took me about three hours to turn the bigger rock blank into the tiny arrowhead you see here. 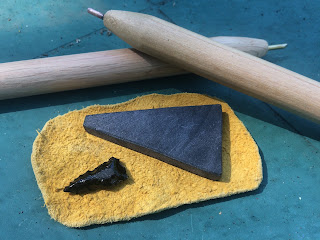 When I was a kid, I loved dreamcatchers.  The mystical idea of dreams floating through the air at night and being able to catch them in a web, which allows the good dreams to drip down the feathers onto the sleeper’s head while preventing the bad dreams from reaching them.  Not to mention the beauty of the weaving and the soft feathers hanging from them.   When my mom would take me to a craft store, I'd sometimes see dreamcatcher kits and want to learn how to make them.

And now I know. 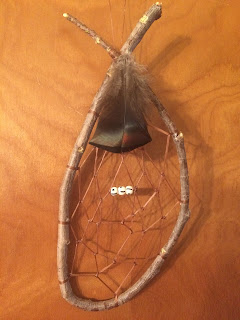 Static tables is the term for the technique used by divers, especially free divers, to increase the length of time that they can hold their breath.  Basically, without getting into the physiology involved, it trains the body to tolerate more CO2 and less O2 in the blood stream, which is what happens when you don’t breath the carbon dioxide out and replenish it with Oxygen.  For safety, I’m doing this “dry” (sitting on a couch, not with my face in the water) and not pushing myself to the point dizziness.

I’m only half way through basic training, but I wanted to mention it with this month’s list because I’m really proud of my progress! When I started two weeks ago, I could only hold my breath for 60 seconds.  Now I can hold it for 74 - that’s a 23% improvement!

And why would I choose this learning activity, I’m sure you’re wondering? Because soon I’m going to learn how to swim like a mermaid! I got my tail, and my lesson is  scheduled for later this week.  But more on that next month, after I actually learn how to be a mermaid... 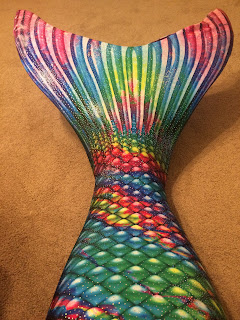 My language of the month was Russian.  This was the hardest one yet, even harder than Greek.  It has a crazy alphabet, although a lot of the letters are similar to the Greek so my March lessons on that language were a big help.  However, very few of the words had similar roots to the romance languages I've studied, so I didn't have any word-association tools that I could use.

Plus, the Russian accent is really, really hard for me.  Even trying to pronounce "Allo" (Hello, with the Romanized spelling) proved too much for me (and believe me, I spent a very long time working on that one word's pronciation).  I suppose I could read signs now as I can mostly sound out written words, but that's about it.

Here's the phonetic alphabet chart I used to get through this month's lessons:

And just for fun

Naturally, I’m still working on projects that use skills I’ve learned earlier in the year, of those things I liked doing best.  In particular, I’ve been knitting.  A lot.  Here’s my latest finished project, isn’t it cute? 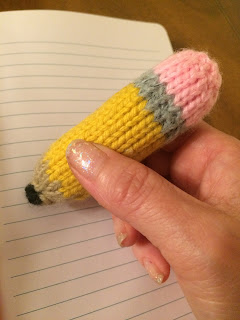