Horsing Around at the Expo 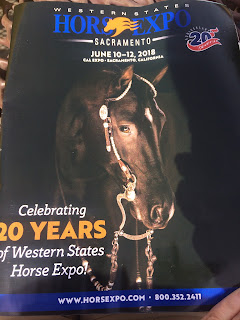 Let me just start by saying that I love the Western States Horse Expo, which is held every June in Sacramento.  I’ve been every year since I moved to Northern California, except last year when I was on the road somewhere in Washington state.

As much as the delay to this year’s ride annoys me, I am glad that it put me in NorCal at the right time to go to Expo.  I spent the entire day there yesterday, and would happily spend the whole weekend there if I could afford it, and if it didn’t happen to be in Sacramento (it’s one of my least favorite places to visit or drive through - a testament to how much I like Expo, because otherwise I avoid that city like the plague).

This year’s Expo was smaller than in the past, but that didn’t leave me with a shortage of things to see.  I was disappointed there weren’t more big name clinicians, as they usually are able to bring in several.  Imagine seeing Pat Parelli, Julie Goodnight, Brandi Lyons, and Jim Masterson in one day, for just $15! That’s how good it was a few years ago.

This year I didn’t know who any of the clinicians were that I watched (Goodnight was in attendance again, but I skipped her talks).  But that didn’t make them any less valuable or enjoyable.  I got a great lesson in saddle fit, another in equine nutrition for the difficult case (...ahem... Apollo... turns out I’m doing it as best as scientifically possible, by the way), one on making training purposeful and fun for the horse (it didn’t look like the demo horse was having fun, though), and a showcase on western dressage.

In between sessions, there was a lot of shopping to be done.  I’m already pretty much equipped for this year’s ‘Ride, so I couldn’t justify actually buying much, but it was still fun to window shop.  I did get a new fly mask for Apollo from my favorite fly mask company Equivisor (disclaimer, not a sponsor, just really wonderful people and products), and really cheap dewormer - I’m sure Apollo will be so happy about that one when I see him in two weeks! 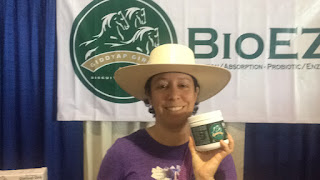 There were also lots of product samples available. I’m most excited about an enzyme-and-prebiotic formula that I picked up called BioEZ (also not a sponsor, by the way, just an awesome looking product with no sugar or fillers).  The one thing that the nutrition expert recommended which I have not regularly included in Apollo’s diet is this sort of supplement, so I hope that it will make a difference in his weight this summer! 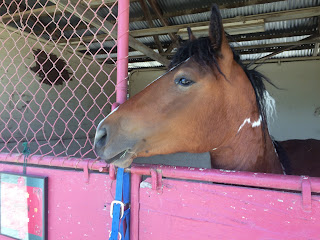 There was also the breeds barn to visit, where you could see and love on a variety of interesting and unusual breeds, such as the Bashkir Curly (always one of my favorites, pictured above), Peruvian Pasos (Apollo’s cousins!), and Gypsy Vanners.  I’ve been feeling deficient in horse aromatherapy and furry noses, so I really enjoyed wandering this area.

Who knows where I’ll be next June, but if I’m home again you should definitely expect to find me at the Expo!
Posted by Meredith Cherry on June 10, 2018