How I met Apollo, and other stories 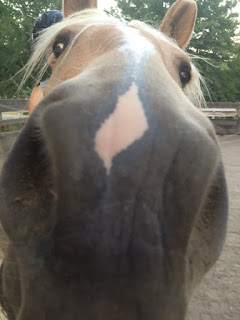 By popular request, here’s the story of Apollo...

Apollo is 10 now, and has been my buddy for about 4 1/2 years.  We crossed paths when he was 5 going on 6, an irascible green broke knucklehead who had been spoiled rotten.  I became his fourth owner; he never lasted long with anyone because he was a pushy brat who needed more time and training than his previous owners could give him (or so I was told, from various people who knew or owned him previously). 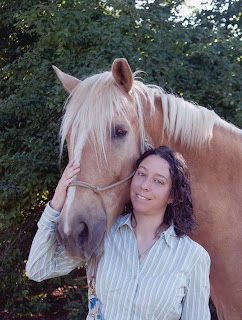 Why did I pick Apollo, and how did I find him? That’s a question I’m often asked by people who meet him.  He was advertised on Craigslist.  I’d been scanning the horse ads there and elsewhere for a while, looking for a horse that was big enough to carry me and my packs (I already had begun planning the Centauride), that didn’t have any preexisting injuries or other such problems (since he would need to be in excellent physical condition to do the ‘Ride), and that had at least minimal training.  Also, the horse had to fit my budget: I had sold my engagement ring as soon as I left my evil ex, and promised myself that I would use that money to fulfill my dream of owning a horse.  It was definitely a good trade!

When I met him, he was extremely friendly and people oriented, which I felt was a good sign for training.  He followed me and his then-owner around the barnyard the whole time, just to get attention (and treats).  I did not take him for a test ride, despite that being normal procedure, because I knew he was green and it didn’t really matter to me since I was going to have to basically start from scratch with his training anyway.  He won me over with his eagerness, and of course being gorgeous didn’t hurt the decision either.

I had never owned a horse before, although I have a degree in Equine Science and had always planned on a career with horses.  I’d also never trained a horse before outside of classroom-round pen practice at university.  (Yes, I got college credit for learning how to train a horse. Also took classes for credit in both English and Western equitation, and packing).

So Apollo was my learning project, as well as my lifelong dream horse.  Well, maybe not so dreamy at first.  He bit everyone, demanding treats.  I felt very lucky that I bought him in winter, so I could wear a touch protective layer of my winter coat while I worked on the biting problem.  When warmer weather arrived, he was doing much better (phew). 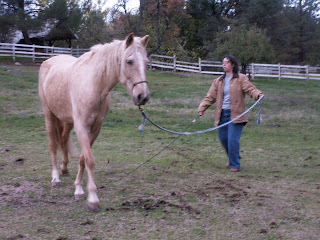 He had been green-broke by a local trainer in one of the usual month long programs, so he did know how to do the basics.  However, I could tell he had been rushed through it, and was not confident or happy with any of it. I decided that no matter how badly I wanted to gallop off into the sunset, or at least lope around the arena, I would take however long necessary to get him safe and comfortable to be ridden.  For me, that meant groundwork.  And more groundwork.  And even more groundwork. 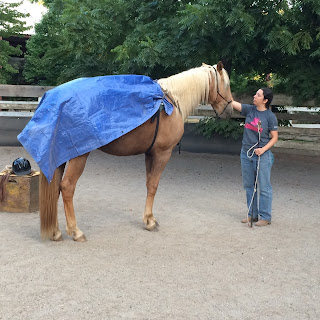 We played all sorts of games on the ground to prepare him for understanding and obeying cues from the saddle.  Even once I started riding him, when we’d get to a point of confusion, I would figure out how to teach it to him on the ground in smaller steps rather than pushing through in the saddle.  Most if not all of the things I asked him to do have a voice cue as well, as I figured that along the road there would be times when my hands would be occupied and he would need to know how to follow commands by simply being told (I was right, by the way). 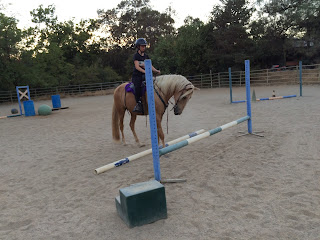 As training methods went, I watched and read a lot of Parelli stuff, but I did not strictly use natural horsemanship of his or other trainers’ methods.  I also incorporated some driving-horse stuff (especially to teach him verbal cues for left and right), random things picked up along the way or from other horse people at the stable, and even one or two dog training ideas (after all, if you can train a dog to heel without waving a lunge whip - or carrot stick etc - in front or behind them “as needed,” why can’t a horse learn to walk nicely by your side like that too?). 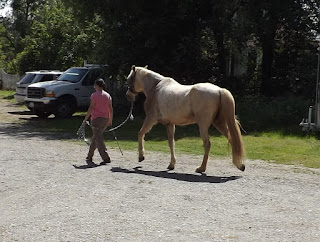 Finally, it was time to exit the safety of the arena and get out on the road.  We started on the rural dirt roads around the stable, and eventually on the winding narrow road nearby where motorcyclists like to cruise on weekends.  That road, by the way, had everyone at the boarding stable nervous about taking a horse on, but I knew that would be the least of the bad roads once we started the ‘Ride.  And in fact, we never had a problem along that road, even when encountering fast drivers. 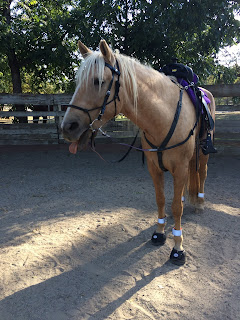 Apollo has come a long way since I first met him, and also, I’m sure, have I.  Not just in mileage! I couldn’t be prouder of him for becoming such a good road partner.
Posted by Meredith Cherry on June 17, 2018