Slavery Is Not Just A Thing Of The Past 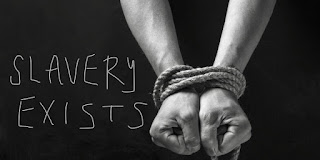 Slavery has been defined with many nuanced words, but it all comes down to one key point: one person exercising complete control over another’s freedom.  The slave is not able to choose the most basic of things for themselves, such as where they’ll live and what they will do for work.  Often, but not always, there is a financial component as well.

Today, though, we do not call slavery by the S-word.  Instead, it is called “human trafficking.”  Don’t be confused - it is one and the same.  It is real. It is common.  And it’s just as bad as the slavery that was abolished following the Civil War.

There are several kinds of human trafficking, and like domestic violence there are many common misconceptions about it.  Human trafficking includes sex trafficking and labor trafficking. This can be further broken down to what we could call a “traditional” kind, where a slaver (in sex trafficking, a pimp) sells strangers for sex or labor (including criminal “work”). There is also familial and intimate partner trafficking which is where a parent, spouse or other family member or partner forces the other into doing some kind of labor then taking all their income, or forcing them to work in a family business for no pay, or forces the victim into prostitution.

Human trafficking is found in every region, big and small towns alike. It’s victims come from every social and ethnic background. They can be of any gender and age. Exact numbers are impossible to come by as many victims are never able to come forward and be counted. While the following may not be perfect, even if you too-conservatively halve the estimates the numbers still indicate a Big Problem.

It is commonly thought that human trafficking victims are almost always women.  However, just a little over half (55-60%) of victims are female.

About 40% of victims are lured into the trafficking trap in one country and sold in another.

It is estimated that $32 billion is generated by human trafficking activities annually and globally, half of which is from industrialized countries (which account for only around 10% of the total number of victims).

Statistically, about 80% of trafficking is sex, the other 20% labor.  In reality, though, many victims fall into both categories.

Human trafficking perpetrators use similar tactics to abusive partners to lure and then secure their victims. These include intimidation, coercion, threats against the victim or the victim’s children, emotional and physical abuse, financial control, withholding food, sleep or medicine, and forced isolation.

In one study of female victims of human sex trafficking, 70% of them had previously been in a domestic violence relationship.  This is also common with children who are trafficked, because children who run away from an abusive home are at high risk of becoming trafficking victims. 1 in 6 runaways shows clinical signs of sexual abuse.

To report human trafficking, or to get help, call the National Human Trafficking Hotline at 888-373-7888 or visit their website by clicking here.

To learn more about human trafficking and help end it in your community contact your local nonprofit such as Good Women International and Operation Underground Railroad.