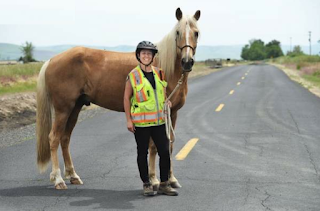 Most if not all women have “body issues,” some aspect of their appearance they hate.  My own body issues are for my horse. Throughout this ride, I have been body shamed over my horse again and again.  My primary body issue is with his hips.  But much of the problem is a modern misunderstanding of what a healthy working horse should look like. (Note I will not always use proper equine terms here, to be clearer for the non-equestrian reader).


In these modern times, where horses are most commonly yard ornaments, the idea of what is “normal” is more often overweight and under muscled.  A pretty horse in our eyes is what we are used to seeing – plenty of fat so not a single rib can be seen, there is no definition of muscles or the major joints.  Fit horses, such as those used for racing, endurance, working cattle, etc, may have the muscling but these are not your average horse.


Whether “halter horses” (those bred and raised for professional halter classes, the supermodels of horses) are a cause or a symptom is unclear to me, but are definitely a good example of our modern mindset.  In halter classes, horses are not just judged for good conformation, but also for heavy muscling and a lot of fat deposition.  Basically, like cattle.  But we don’t eat our horses, and they should not be in that kind of condition.  Halter horses are worked hard for brief times – maybe 15 minutes of hand galloping once a day – to build certain muscle patterns (not unlike a body builder, as opposed to a runner), and fed quite a lot to get the right amount of chubby. This is what judges want, this is what wins, this is then what we see in our horse magazines and come to believe is the ideal.  The reality is that these horses are overweight.


Another issue with modern perceptions of what a horse should look like is that most people are used to quarter horse type horses only.  Of course not everyone! But most people, for sure.  For you who are not familiar with breeds, the quarter horse type is your classic American cowboy horse, and the most popular breed in America.  They are built like tanks, especially in recent years with selective breeding: broad chest, really big “apple shaped” butts, a flat back (or if fat, sunken spine).  In dog terms, they resemble a bulldog.

Now for my body issues.  Apollo is a mustang-Peruvian Paso cross.  His mustang daddy was most likely (from his conformation and the area history) from thoroughbred stock: tall, lanky, angular.  His Peruvian momma had the prominent spine and hips of her breed.  Apollo has ended up with an unfortunate combination as a result: extra long legs (he has to spread them to graze), tall, very lanky, and has prominent bone structure especially in his hips and back.  He also has prominent withers (the part where the neck and back join), is too narrow (his left and right legs are too close together), is slab sided (ribs that are more flat than rounded), and has an ugly prominent vertebrae at the top of his pelvis.


Basically, he would never ever win a halter class, conformationally he is a hot mess.  But he is strong, healthy, has good bones and feet, and is very smart.  A long ride horse doesn’t have to be built perfectly to succeed.  For all his ugly traits, he does not have any conformational faults that will hinder his work.


In dog terms, he looks more like a greyhound.  And if you only know bulldogs, or think that’s what all dogs should look like, you’d think every greyhound is an underweight, starving, mistreated dog.


Especially if you were used to fat lapdog bulldogs, and not hardworking racing greyhounds.

A little about horse body scores and the working horse.  And I mean actual work, not weekend pleasure riding.  Horses are scored on a 9 point scale.  A 5 is ideal – the actual ideal, not the common perception of ideal.  A 1 is dangerously thin, a 9 is dangerously fat.  Fatal health conditions develop at the far ends of the scale – note that fat horses are not healthy horses either!  The “halter ideal” is a 6 or 7.  A working horse such as Apollo would be best at a 5, but is more likely to be a 4.  And in fact, that is what Apollo’s score is.  Always.  If he edges towards a 3, I stop as soon as possible and fatten him back up to a good 4.  A 4 is thin, it is not underweight.  People, a score of 4 is NOT dangerous.  Period.


But it’s never enough for those who would judge him by facebook photos and videos.


Importantly, the body scoring system is meant to be done IN PERSON, by touching the horse as well as looking at him.  Touching the horse allows you to feel whether there are fat deposits, and not guess by looking.  Like people, horses may have fat deposited evenly or in pockets, and may look underweight where they are actually just thin.  Compare, for example, a woman whose chocolate indulgence goes to her hips, or her butt, or her tummy, or her arms, but never equally between them all! And consider the woman that looks heavy but is actually big boned, or rail thin but is actually just built lanky.  Horses are very similar when it comes down to it.


My point is, if you are driving past us at 60 miles an hour, you probably cannot judge Apollo’s weight accurately, and especially not while he is under the saddle (this has happened. Animal control then verified he is fine).  And if you see a photo on facebook that shows his hips/spine/lanky build, but cannot examine his other “points” on the body scoring system, or touch him to determine fat deposits, you probably cannot judge his weight accurately.

Apollo works very hard, but not as hard as possible.  I get tired before he does, so that pretty well ensures I don’t overwork him! He walks – and only walks, though he would like to go faster – usually less than 5 hours per day, and most of the time I lead him instead of riding so he only has to carry 70 lbs of packs instead of 200 lbs of packs and rider.  Many days I only walk.  But even when I do ride, consider how much the average rider weighs – 200 lbs is not asking too much of him.


He gets to graze throughout the ride, whenever he wants to (assuming it is safe there).  He gets as much alfalfa, grass hay, or pasture as he can eat for the rest of his day.  In fact, he gets more than four times as much hay as most people feed – they offer a flake or two for the night, and I ask for 6 or 8 instead.  And he will almost finish them.  Plus breakfast hay.   He also gets about 10 lbs of grain per day when I can get it (which is most days), dressed with weight building supplements.  He is not a picky eater, although he does not like peppermint horse treats.


He is dewormed every two months, has his teeth worked on annually, is current on all vaccinations, and gets a vet inspection for his overall health – including weight - about once a month.  He gets at least two days off per week, a week or more off every 6 to 8 weeks and sometimes quicker.  He will be getting the whole winter off this year.  He has never had a digestive or nutritional related health problem (in fact, he has had very few health problems so far, just a respiratory infection from wildfire smoke, and a cut on his leg from playing too hard in a pasture and stepping on himself.  Both of which he was allowed to immediately rest and fully recover before continuing on.)


That he looked less skinny when we started is normal – he was pasture fat and lightly worked then.  He still had prominent bones , a raised spine and huge hips, under the excessive fat.  It took about a month on the road to reach his "fit" condition, and he has maintained approximately the same condition since then.  Now he is a well loved, heavily fed, vet approved, athlete.  A strangely and poorly built, thin but not underweight, happy horse.
Posted by Meredith Cherry on January 14, 2018