Recipes from the road: Masala Chai 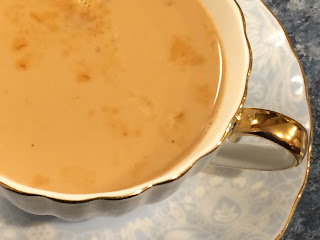 The “chai tea” available at stores and coffee shops in the US is vastly different from what it is intended to resemble in India.  In fact, the name chai tea is itself not even correct, and is redundant. Chai means tea, so chai tea means tea tea. What we call chai is actually most similar to what is properly called masala chai, which could be translated as curried tea or spiced tea.

Masala chai is drunk at all times of day in India, made at home or bought from street vendors found on nearly every street corner. It is taken much stronger and sweeter than we Americans are used to. In fact, it’s so sweet that even Indian restaurants here tend to water it down to make it more appealing for the American palate. If you’re looking for a health drink, this is not it. But it is absolutely delicious.

This is my own interpretation of a recipe I got by talking to a street vendor in Rajasthan for several weeks in a row. Since he made it with whole spices that aren’t readily accessible in many parts of the US, and without measurements, I have made my own experiments to figure out how to make it taste like his.

Makes a one-cup serving (can be scaled up)

Combine in a saucepan:

On high heat, bring to a rolling boil. Do not start heating it until it’s all combined in the pot or it will boil before you’re ready!

Still on high heat, bring to a full boil again. Stir occasionally. Watch it carefully or it will boil over!

Once it’s boiling, just before it boils over, add:

Bring to a boil again. It won’t take long, keep an eye on it!

Pour through a filter or mesh screen into a mug. Enjoy immediately. 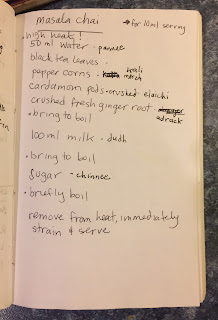 The original recipe as told to me by a street vendor

Email ThisBlogThis!Share to TwitterShare to FacebookShare to Pinterest
Labels: Recipes