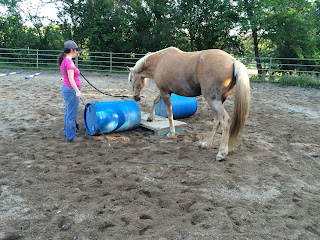 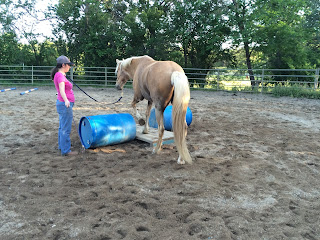 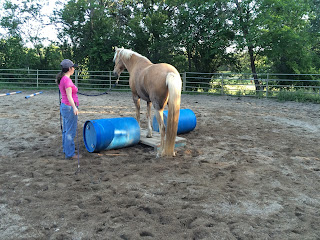 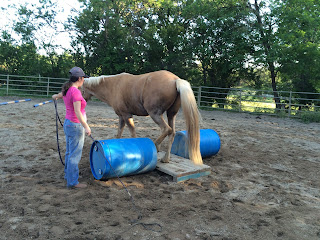 Recently Apollo has been working on the "bridge."  This modified pallet is a great tool for trust building and "paying attention" exercises.

While the pallet is sturdy enough to hold Apollo's weight, it does have some loose, shifting planks.  Naturally, Apollo does not want to walk on it.  Being a smart horse, he will think of every possible solution to continuing in the correct direction without actually stepping on the bridge.

The series above shows the stages of acceptance and crossing when he first was shown this new obstacle.  No longer able to avoid it, he tested it by pawing it with his foot, then stood on it with both front feet.  I allowed him to investigate it at his own speed, including pausing as he felt the need.  With lots of praise and a little driving action to encourage him forward when he relaxed at each step, we conquered the bridge!

Once he had mastered this in both directions so he would cross it confidently on a simple cirlce, I added a figure eight pattern (see how in this video), and then later added some ground poles on the other side of the figure eight.  By the end of 30 minutes, he was walking and trotting the full pattern in either direction.

Here's the full pattern, so you can try it with your horse: 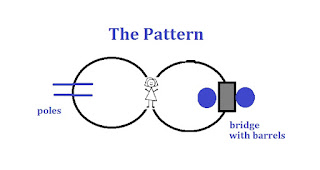