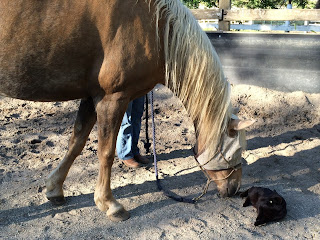 Apollo likes to play a game I call "Touch It."  This is based on a Parelli game, but is my own variation.  It is useful for

The key benefits to this game are

*maintaining focus, especially when distracted by new things
*building confidence (for the horse)
*building trust between horse and human

The Touch It game is a very simple one for the horse to learn.  The command is to say "touch" and indicate what object the horse should touch with his nose.  This is easiest to do with a carrot stick or similar arm extension tool, so you don't have to stretch or bend down to indicate an object out of your immediate reach.

Some horses want to touch everything anyway, like Apollo, and will quickly learn that touching on command earns praise.  For horses that are less curious, you can set a treat before beginning, so the horse learns that touching something on command means they may find food on the object to touch.

The skill level can be increased by adding scary objects such as flapping or noisy items, or by using moving objects like a ball (or a cat as in the photo above - Apollo was determined to touch it, especially when it tried to get away from him!)

When successfully learned, your horse will build his trust in your judgment - that what you tell him to touch is safe (and maybe delicious).  It will give him focus and confidence in new or frightening situations, where an object that was scary suddenly becomes part of the game.

For Apollo, I have seen him switch in an instant from ready-to-bolt to ready-to-play with just the word "touch."  He will now approach a new object with curiosity instead of fear.  If he is encouraged to touch it, whether it's a tractor idling in the arena, a tarp blowing in the wind, or a chicken moseying around the barnyard, he becomes instantly relaxed about it.  In our last training session, he even chose to leave the relative safety of the far side of the arena and follow at my shoulder while I rolled barrels into position (touching them too, of course).