What is a long ride?

A "long ride" is unique among equestrian pursuits.  It is further than a trail ride, and further even than an endurance ride.  It is also slower than an endurance ride (which is a speed event), with most miles travelled at a walk.  Where trail rides and endurance rides are planned exclusively along a scenic horse trail, a long ride may encompass any number of kinds of roads, trails, tracks, fields, and city streets.  Even rides such as the epic Unbranded journey, which was planned for maximum wilderness miles, must also venture onto highways and roads from time to time to reach the final destination. 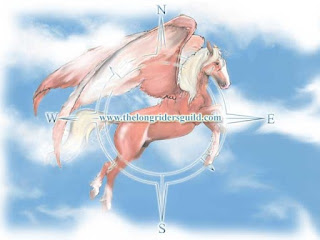 The Long Riders Guild, which has been providing me with excellent assistance in preparing for this ride, defines the qualities of a long rider:

Finally, it is not just about miles.  While 1000 is the minimum to be officially called a long rider, my own goal will not be completed on state number three when I will have met the mileage requirement!
Posted by Meredith Cherry on May 22, 2016