Mission San Diego, the Mother of the Missions 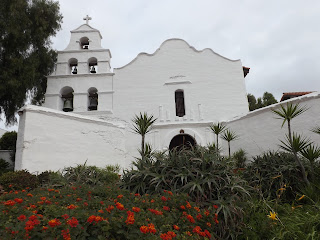 First of the 21 missions and known as the Mother of the Missions, Mission San Diego de Alcala was founded on July 16, 1769 by Blessed Junipero Serra.  It was name for St. Didacus of Alcalá, a fifteenth century Spanish Franciscan.   By the first few months of 1770, food had run low, no permanent buildings were erected, and there had yet to be a single conversion. Four soldiers, eight Catalonian volunteers, one servant, and six Christian Indians from Lower California had died from scurvy since the expedition's arrival; serious consideration was therefore given to abandoning the site and returning to the Baja settlements. It was therefore determined that, if a supply ship did not arrive by March 19 (Saint Joseph's Day), the expedition would be recalled. Father-Presidente Serra, in response, wrote a lengthy letter addressed to Father Francisco Palóu the following day:


Four Fathers, Fr. Juan Crespí, Fr. Fernando Parrón, Fr. Francisco Gómez, and I, are here, ready to found a second mission, if the ships arrive. Should we see that hope and supplies are vanishing, I shall remain here alone with Fr. Juan Crespí and hold out to the very last. May God give us His holy grace. Recommend us to God that so it may be...


Serra feared that if San Diego were abandoned, "...centuries might come and go before the country would again be revisited..." Just before sunset on the 19th, the San Antonio entered the harbor.  The ship had been bound for Monterey to deliver supplies to the expedition waiting there, but had lost one of its anchors and was forced to make port in San Diego. 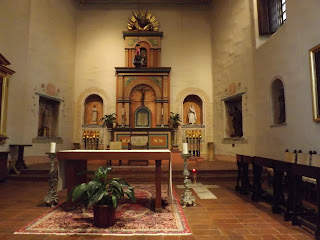 The mission remained at this site for only five years; the water supply was not sufficient for sustaining the crops, the soil was not fertile enough and the American Indians were intimidated by the military. The decision to move the mission six miles east was made by the pastor, Father Luis Jayme (a young Majorcan) and approved by Father President Serra. The new site was close to the San Diego River. Father Jayme had great rapport with the American Indians but still some of the mission Indians became discontented and they incited hundreds of Indians in remote villages to riot. According to Father Palou's report of the incidence, eight hundred American Indians stormed onto the grounds in the middle of the night on November 4th, 1775. They pillaged the mission, burned it to the ground and massacred Father Jayme, who became California's first Christian Martyr.


Father Serra returned to Mission San Diego de Alcala to oversee the rebuilding of the mission. Fearing that would be another raid, the padres rebuilt the mission according to the specifications of an army fort. Reestablishing the mission was a long, difficult process. This mission was always one of the poorest. The land was difficult to till, the water not always plentiful. 1797 was their most successful year: 565 baptisms were performed, 1405 converted to Christianity; the land area encompassed 50,000 acres, harvesting corn, wheat, barley, kidney beans and chickpeas; vineyards produced enough grapes for wine and gardens yielded vegetables. The mission owned 20,000 sheep, 10,000 cattle, and 1250 horses.  Unlike other missions, the neophytes at San Diego continued to reside in traditional villages in part due to food shortages at the mission. 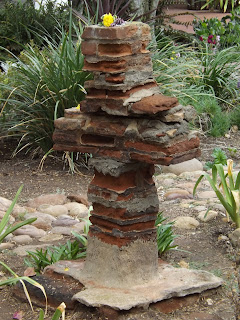 San Diego achieved the reputation early on as site of the region's first public execution, one it may not deserve. On April 6, 1778 four native chiefs of Pámo, one of San Diego's Indian rancherías, were convicted of conspiring to kill Christians and were sentenced to death by José Francisco Ortega, Commandant of the Presidio of San Diego; the four were to be shot on April 11. However, there is some doubt as to whether or not the executions actually took place.


After the United States acquired this area from Mexico, two companies of the artillery occupied the mission beginning in November, 1853. Various companies of artillery and cavalry were at the mission until 1858 or early 1859. They made some repairs and added a second floor to the church. Subsequently, the mission was abandoned for several years. In 1892, the Sisters of Saint Joseph of Carondolet moved onto the mission compound and conducted an American Indian childrens' school for seventeen years.  In 1931, the mission was rebuilt to mirror the 1813 church.  By that time, only the facade was still standing. It was designated as a Minor Basilica in 1976 by Pope Paul VI. The Mission today is an active Catholic Parish in the Diocese of San Diego. 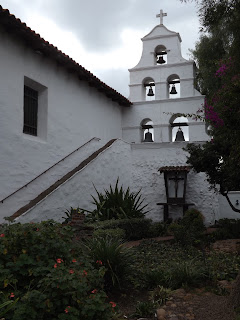 A striking 46' campanario (bell wall) on the left side of the church rises above the mission gardens and contains five bells. The largest bell, called Mater Dolorsa, weighs 1,200 pounds. It was cast in San Diego in 1894.  The baptismal font in the museum is original to Mission San Diego. The baptismal font in the church is a replica of the one in which Fr. Junipero Serra was baptized in 1713 in Petra on the island of Majorca.
Learn more about the missions and other great places to visit along the coast in “Along the King’s Road: A Guide to Touring the California Missions.” Get your copy here!
Posted by Meredith Cherry on November 07, 2015