The most artistic caves in the world 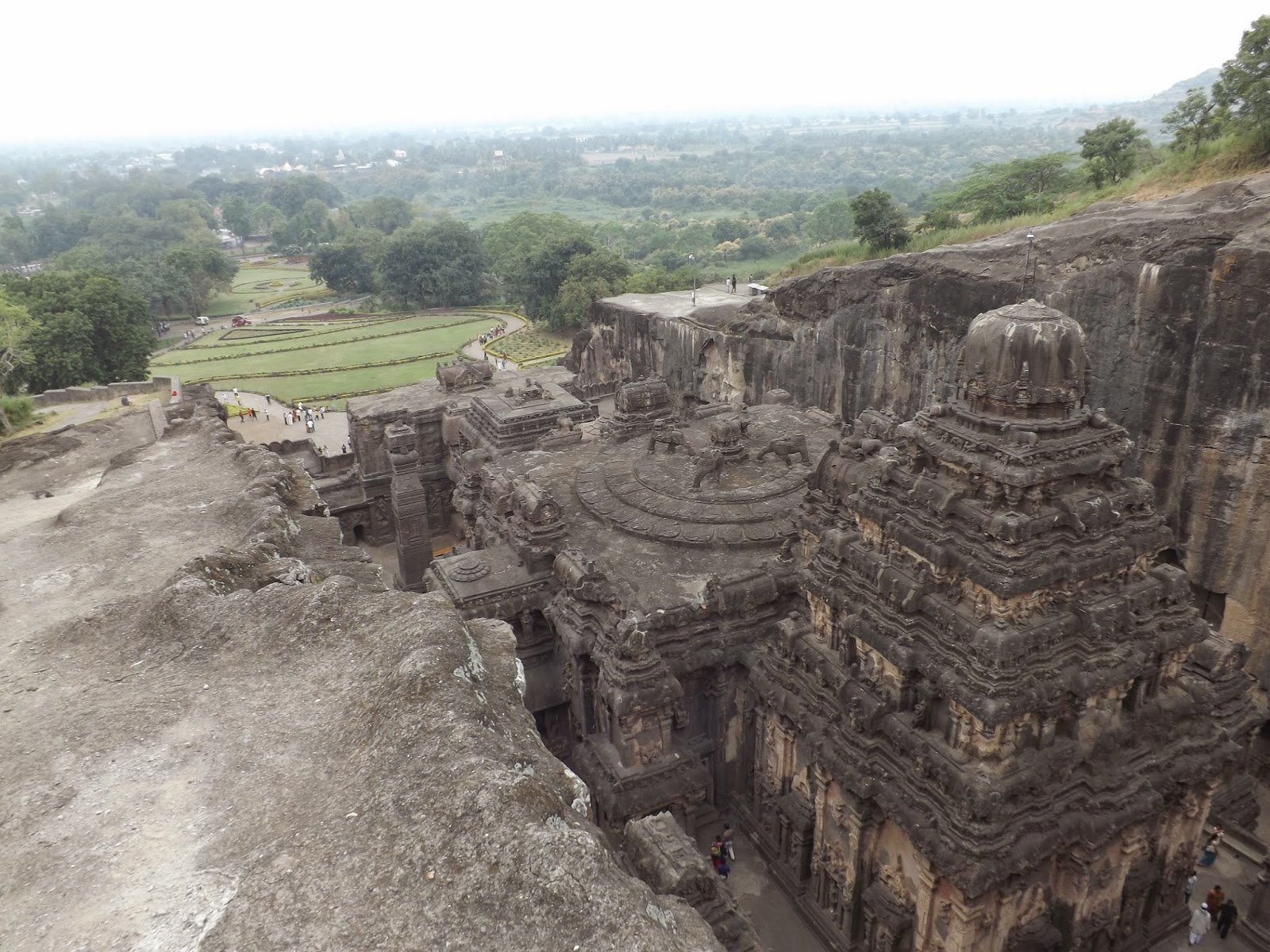 There was just one thing on my absolutely-must-see list in India, to which even the Taj Mahal came in second in my plans: the caves of Ellora and Ajanta. Like Hampi, this amazing set of historical sites is somewhat out of the way from anything else to visit.  But it was just as breathtaking as I had expected.  The caves are not musty damp holes in rocks!  These caves were intricately carved into monasteries and temples about two thousand years ago.


The nearest city for visiting these sites is Aurangabad.  It was nice, as Indian cities go – cleaner than average, reasonable tuktuk fares, plenty of appealing places to eat.  I stayed in an extremely posh budget hotel (every room’s lights also included a blue mood lighting option).  Aurangabad actually has lots of nice things to see, like a historic fort, mosques, etc, but I was only able to see them in passing.


The caves are actually in two different and distant locations. Ellora is close to Aurangabad, and so it gets the most visitors.  Ajanta is 100 km away (over 2 hours each way), and not near anything but cornfields. Tourists pressed for time usually just visit Ellora and skip Ajanta… this tourist, who also only had one day, decided to hire a driver and see it all. 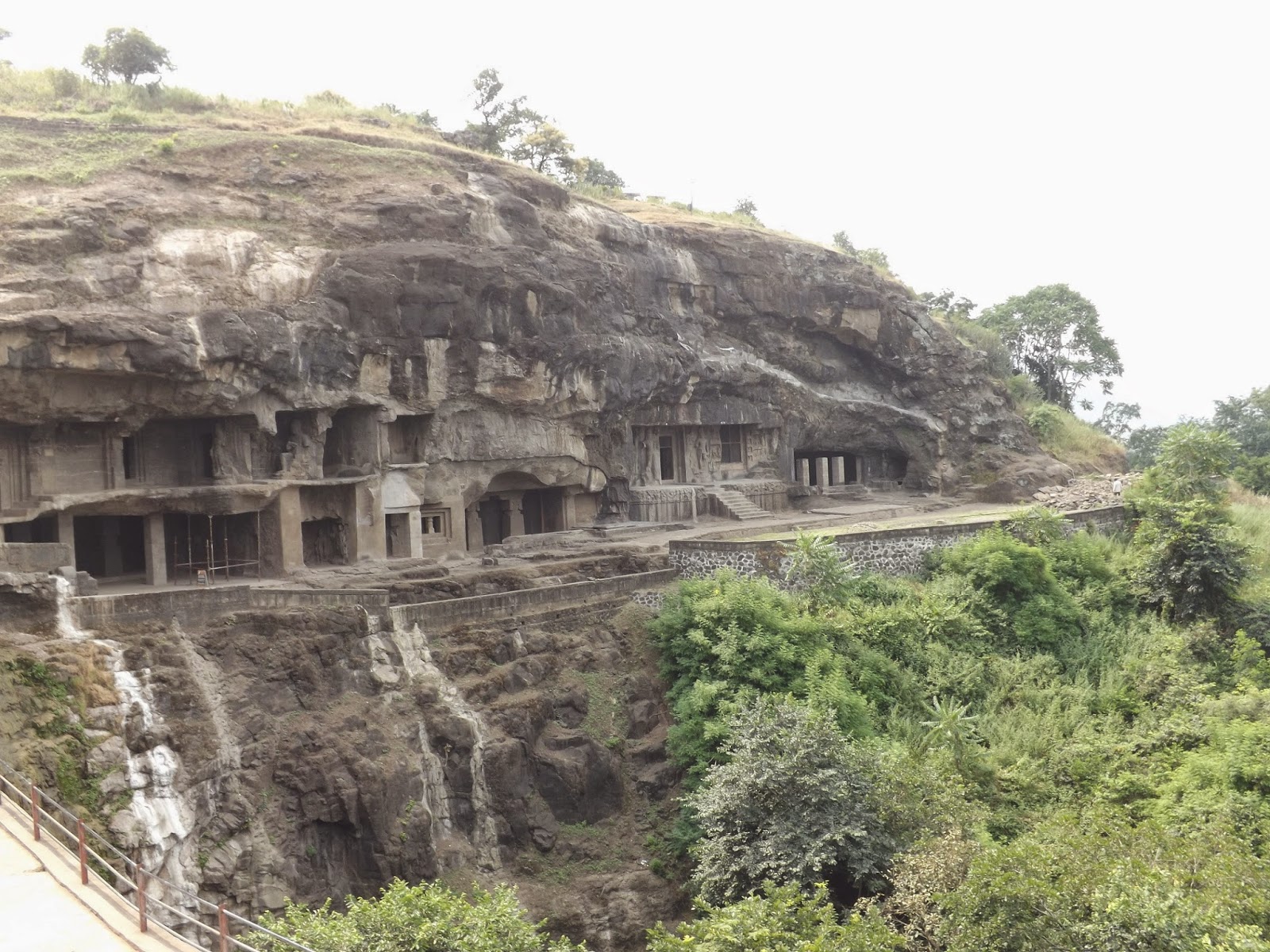 We went to Ellora first.  This set of caves is located on the side of a mountain that rises out of the plains.  The first caves were carved by the Buddhists, and were the farthest to the right.  They carved out some dozen caves of various sizes over the course of several hundred years. 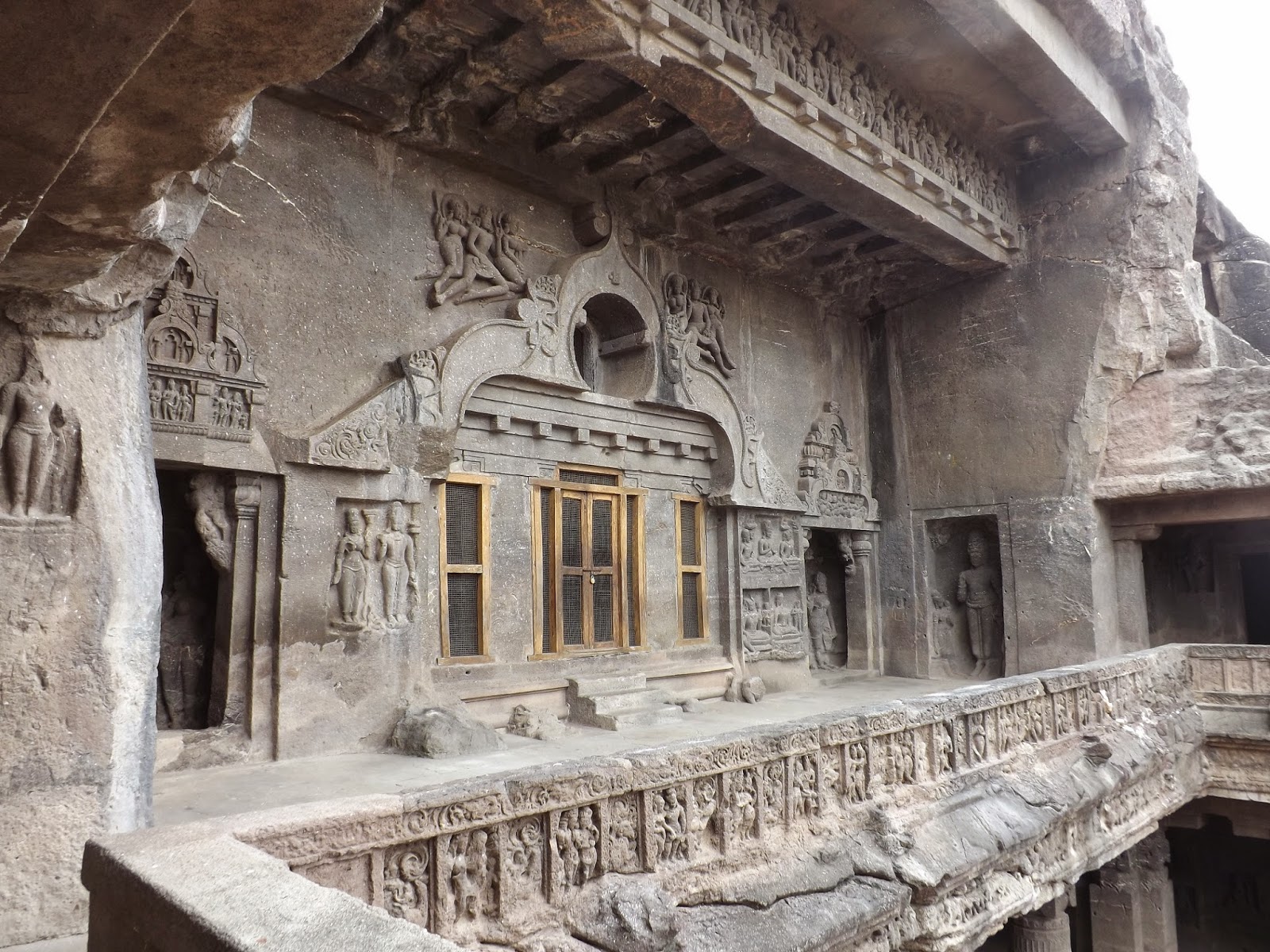 These caves included living quarters, great halls for large gatherings, and temples.  It was interesting to see how the style progressed over time, both in the scope and intricateness of the architecture and artwork, and the changes in Buddhist symbolism as the schools changed from Hinayana/Theravada to Mahayana. 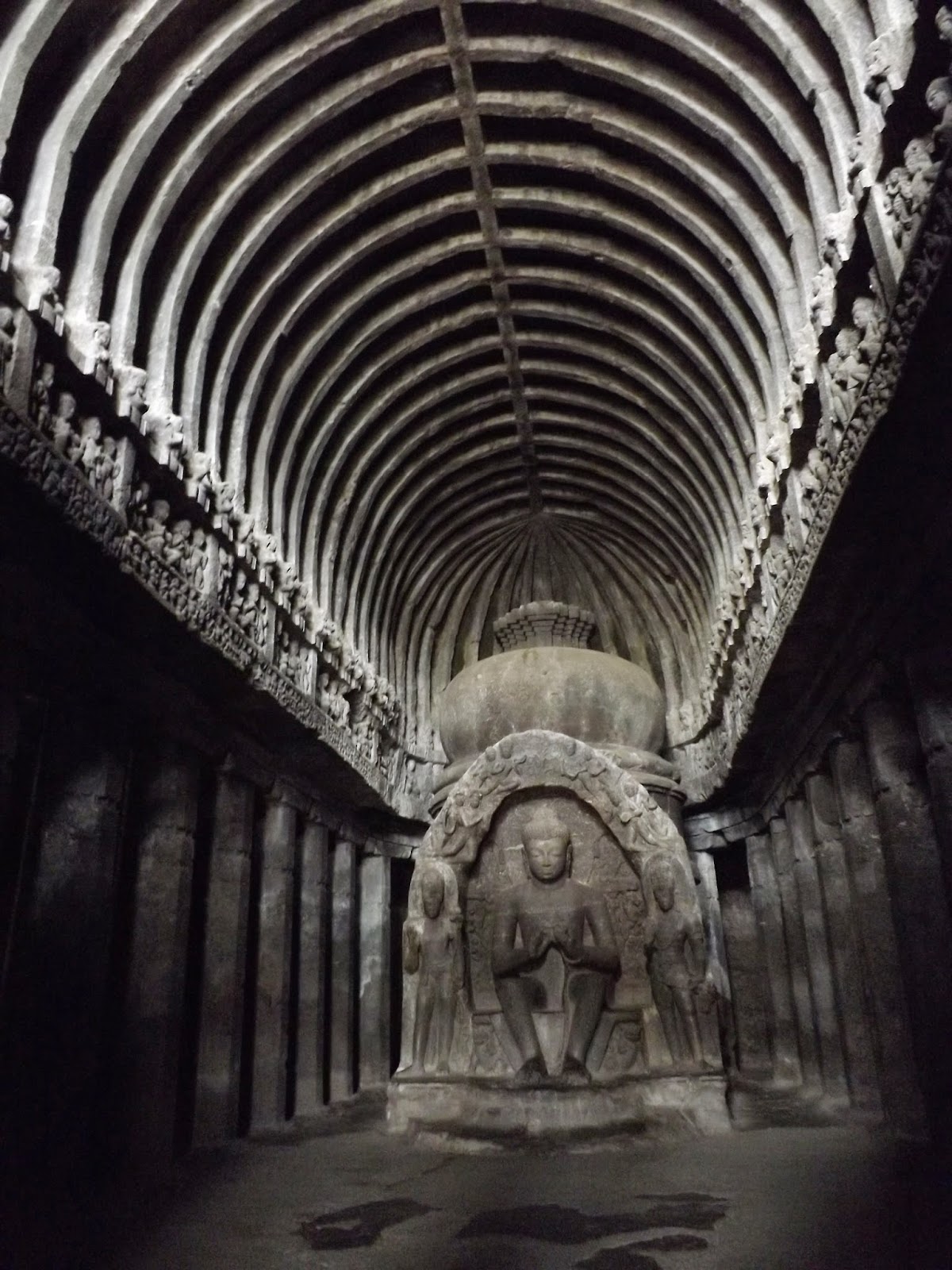 Every cave was amazing.  Just thinking about carving these caves out of the mountainside is impressive.  Every bit of every cave is carved directly into the living rock.  There are no added sculptures or structural elements – it is all just purely carved in the mountain.  Each cave is one solid, functional sculpture.  Perhaps the most amazing was the temple cave that was carved with ribbing on the ceiling to give it excellent acoustics – I wish I could have heard monks chanting in there! 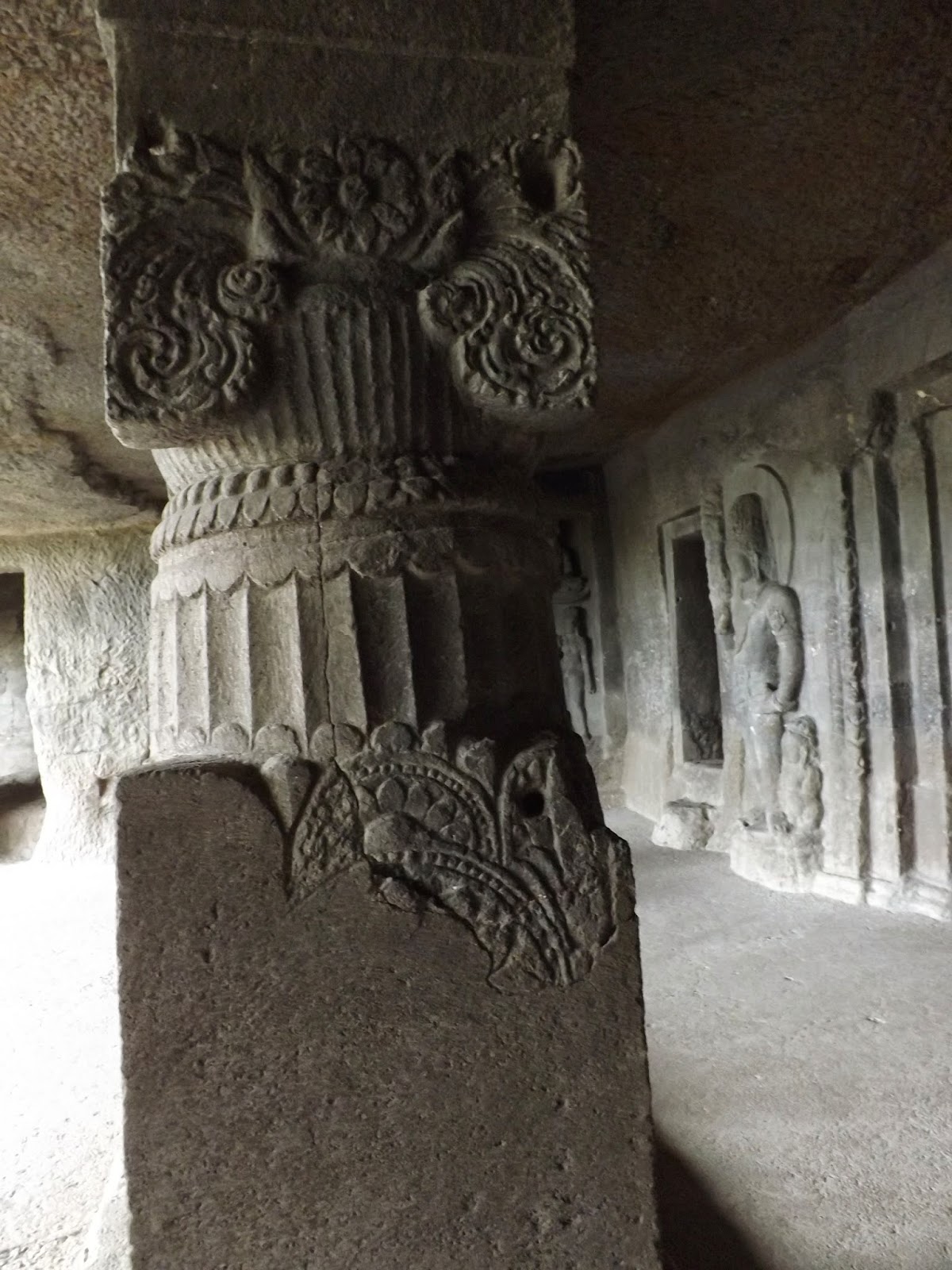 Not all the caves were finished before the site was abandoned, so you can actually see the work in progress.  Sometimes it is a pattern that is only half completed, sometimes it is the rough edges blending into the mountain on the side of a statue, sometimes it is a set of pillars of which only some are decorated.  But every reminder of the blank slate, so to speak, left me awestruck at the immensity of the work. 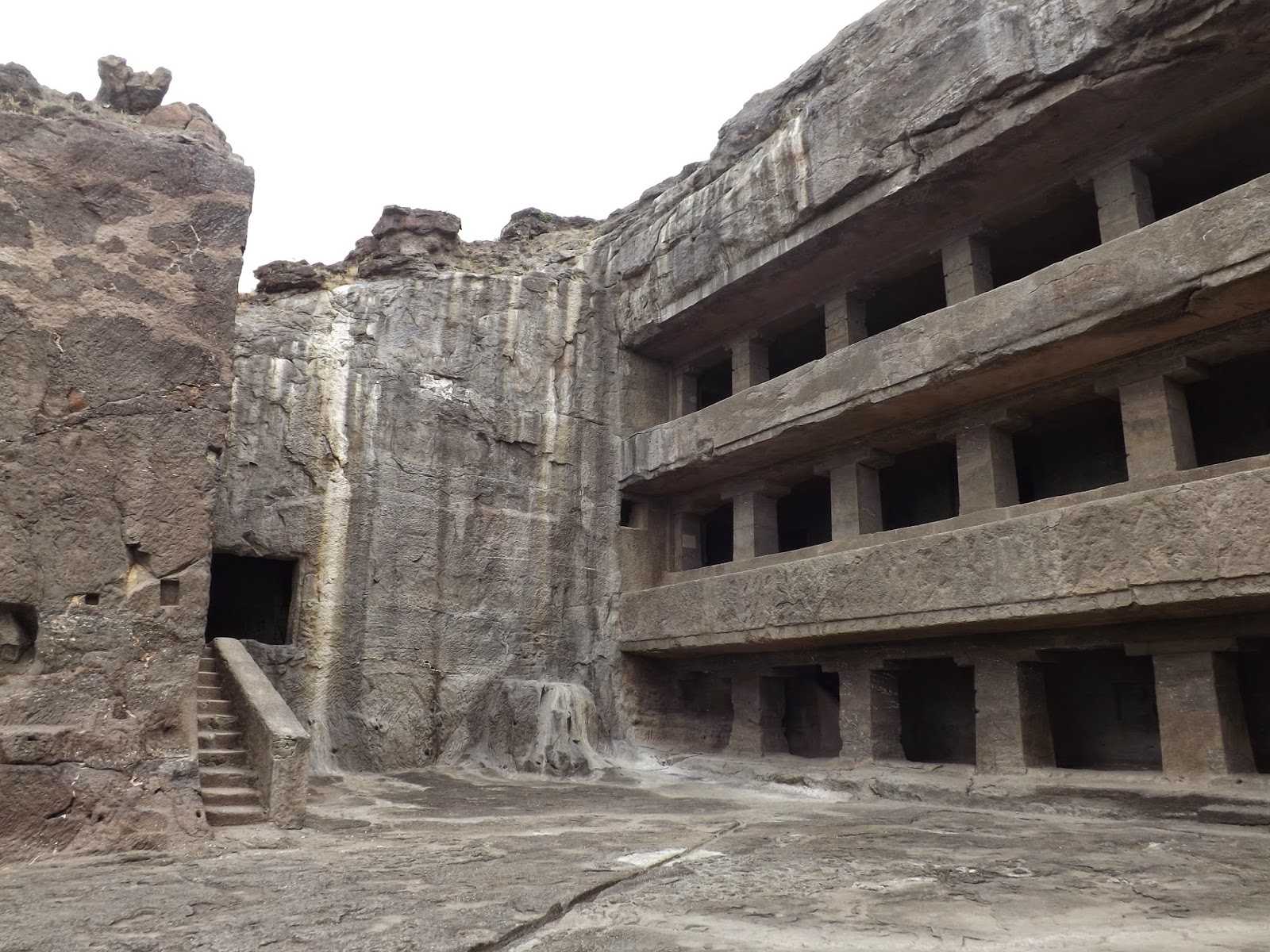 And these were not little caves, either! All of them were full sized rooms with smaller cells for the monks.  The largest of them was a three story complex that rather looked like a hotel façade.


The caves at Ellora also had similar achievements from the Hindus (about 15 in the center of the mountain side), and from the Jains (a half dozen on the left side).  I was still feeling up to my ears in Hindu temples from my Hampi experience (and I needed to get to Ajanta), so I limited my visit to the best of the best, the most famous cave: the Kailasa Temple. 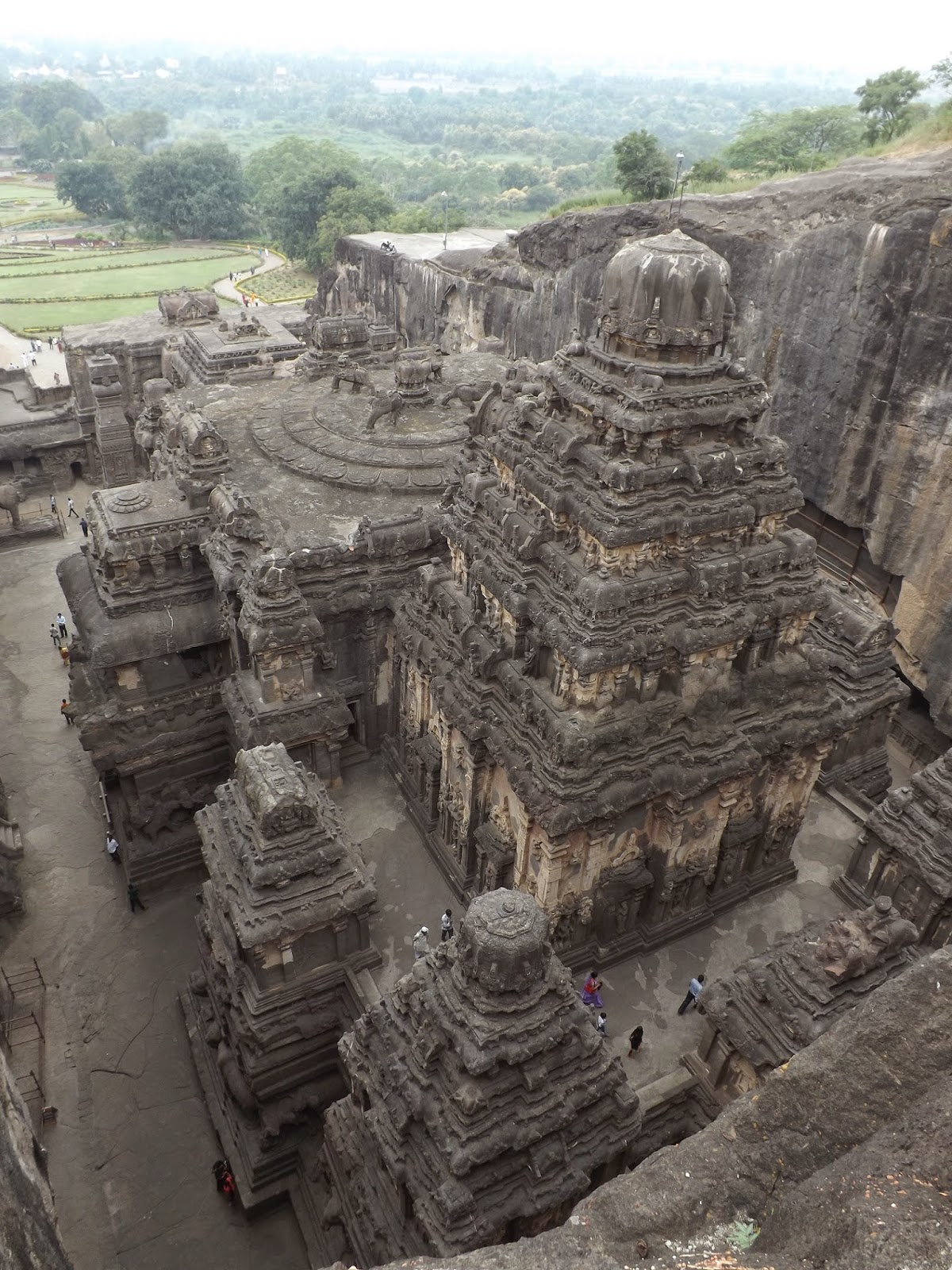 This temple is simply amazing.  Unlike the other caves that looked like buildings or rooms inside the mountain, this temple was carved out of the mountain.  To put it another way, the temple was carved of solid rock (like all the other caves) but the mountain itself was removed from around the temple so that it became a free standing structure instead of being an actual cave.  The end result looks like a regular Hindu temple (but in black rock, a unique color), and it is only when you realize how it was made that it truly becomes spectacular. 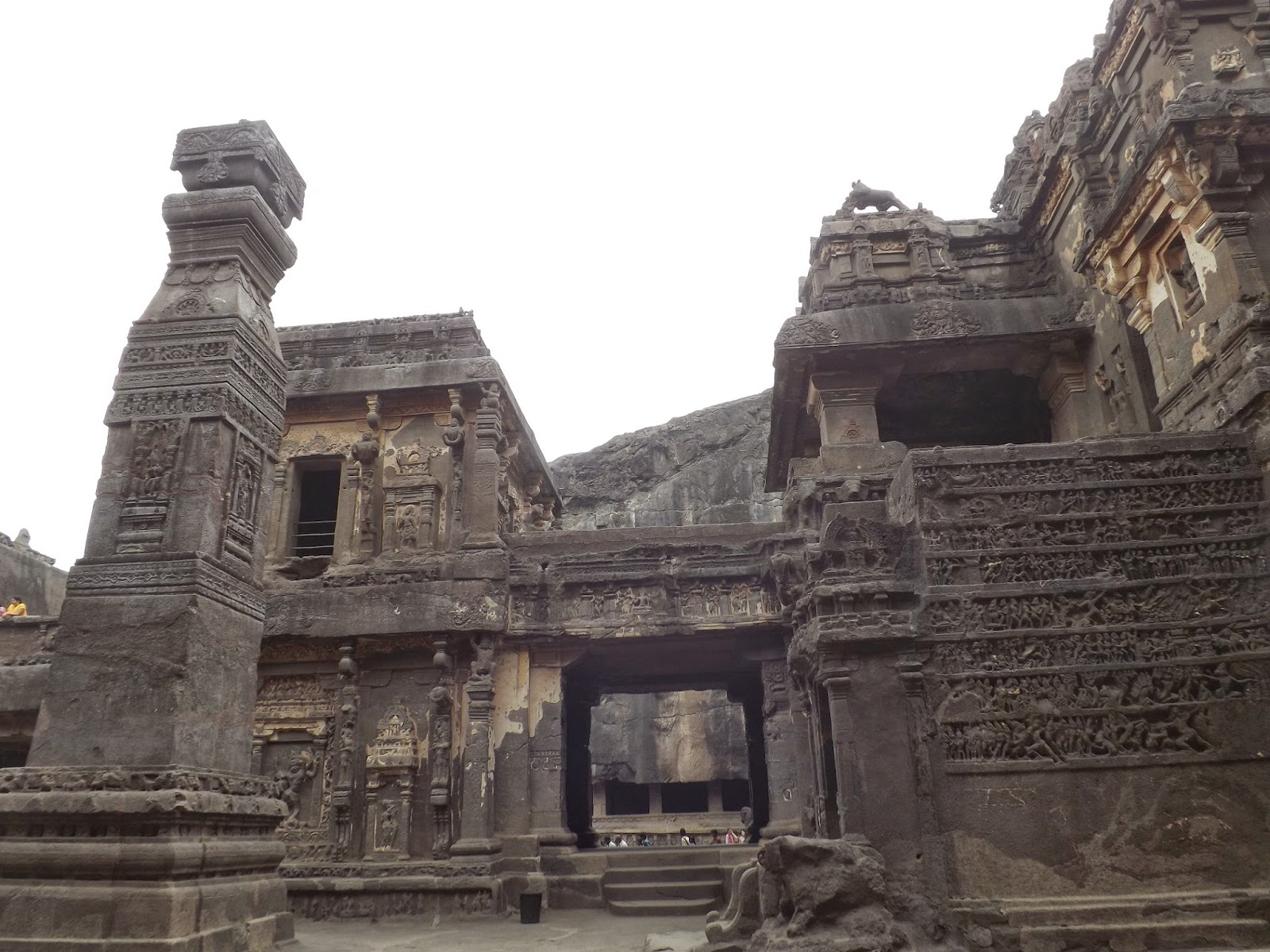 The temple was not just one monolith, but rather a complex of large building, small buildings, side rooms in the mountainside, pillars, huge elephant statues, bridges, balconies, the works.  All out of solid stone.  Archaeologists have estimated it took a least a hundred years to carve it and haul away the unwanted rocks. 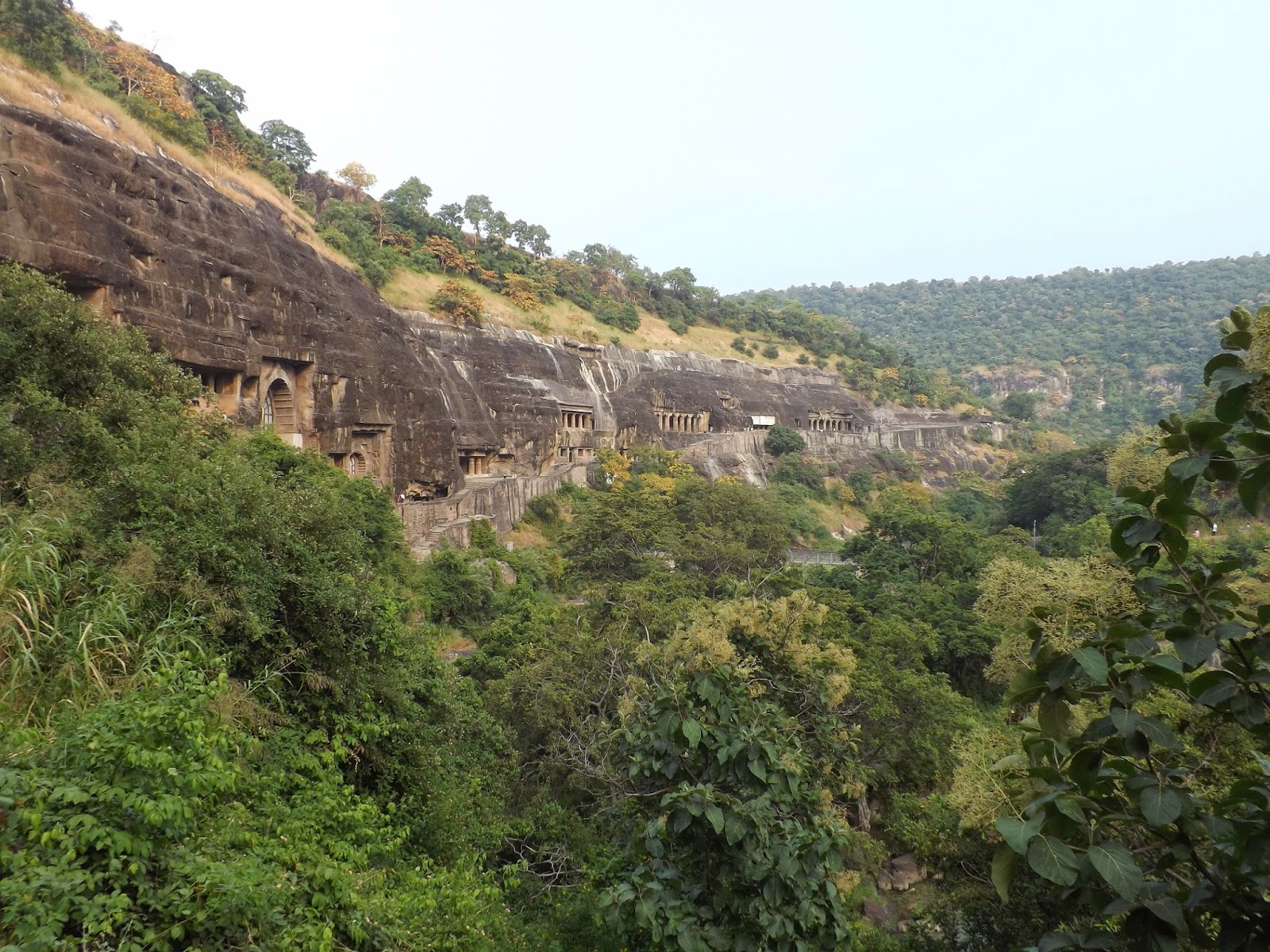 After a long drive through cornfields and rolling hills that reminded me of Missouri, we arrived at Ajanta.  This set of caves was purely Buddhist, with about two dozen caves along the side of the mountain.  The mountain here was much more beautiful than Ellora, being set on a horseshoe-bend of the river with spectacular views. 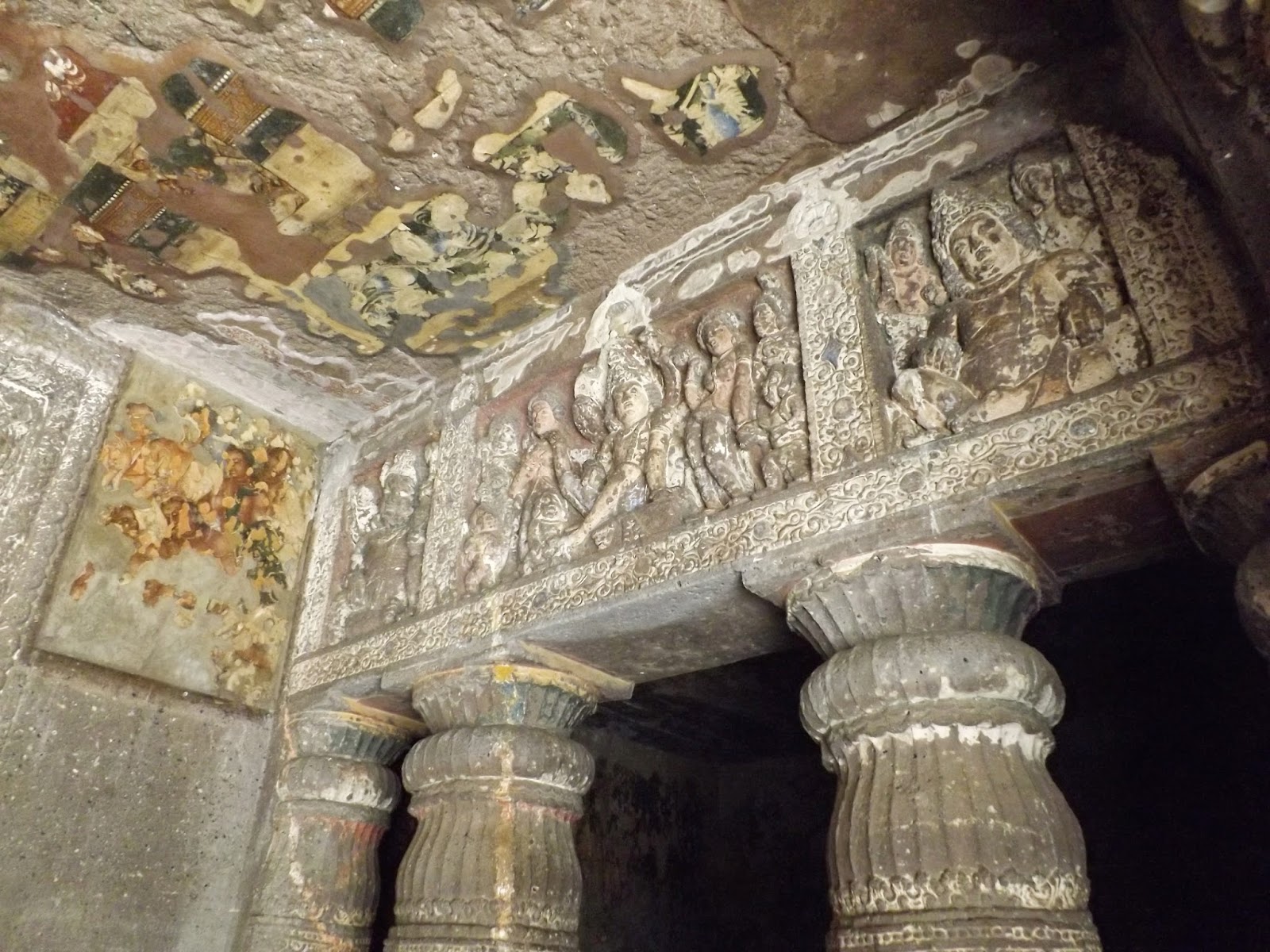 When Buddhism lost favor in India, the caves here were abandoned and swallowed up by the jungle.  The climate in the caves was excellent to preserve their artwork, and so when they were rediscovered in the 1800s they were found to contain the best (and almost only) examples of early Buddhist paintings.  The inside of nearly every cave was painted with murals on all the walls, pillars, and ceilings.  Though it has not all survived, and the colors have faded, it is still beautiful.  It must have been quite a sight to see when it was newly painted! 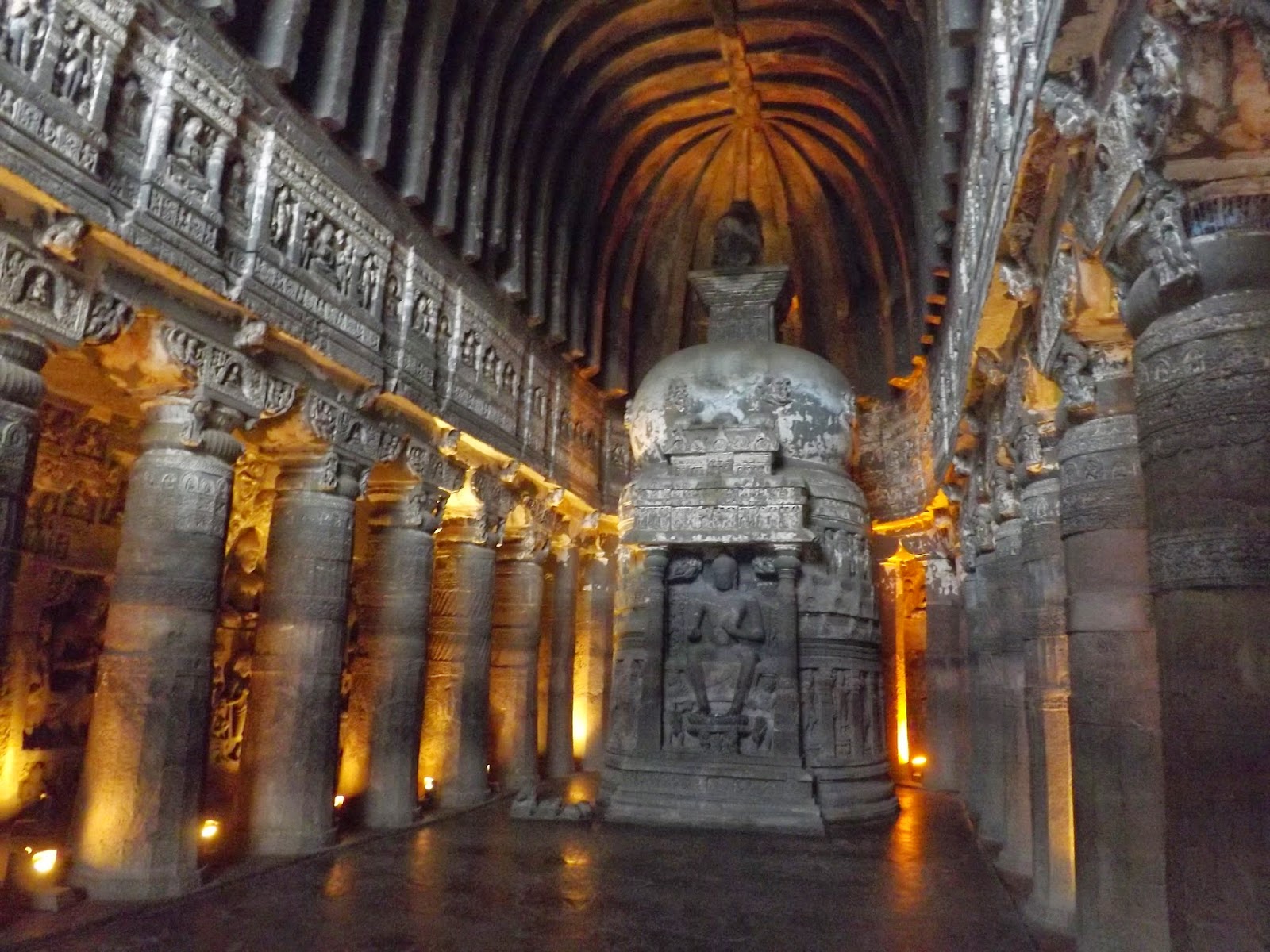 The caves of Ajanta are considered by the experts to be not as high of quality in stonework, and less important for tourists, but in my humble opinion they are more beautiful than Ellora with their ornate designs, colorful paintings, and lovely river views.
Posted by Meredith Cherry on October 18, 2014