Exploring the ruins of Hampi 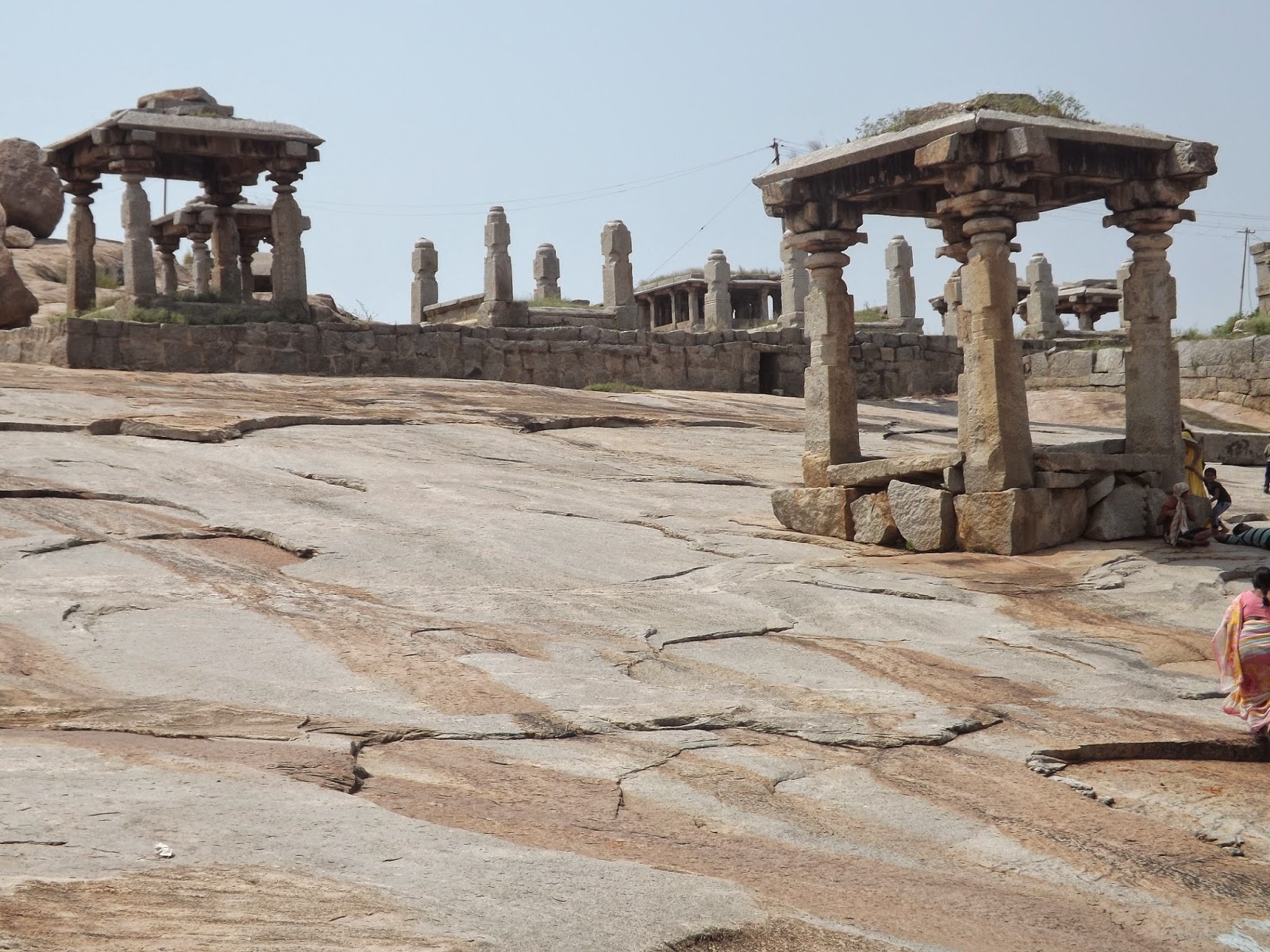 Hampi is probably the most interesting place I have visited yet, but geez was it a pain to get to!  My unreliable guidebook said that it was a long way from anywhere else, which was a bit of an understatement.  Unfortunately for me, it also said that I could take an overnight bus from Goa (great news!) BUT it neglected to mention which part of Goa the bus left from.  I asked at the bus stop in Madgoan, thinking that it was a large city and major bus depot, but they said there was no such bus.  I later found out (after taking three slow “local” buses – meaning they made lots of stops, and had tiny uncomfortable seats - and a tuktuk for an 11 hour journey) that there was in fact an express overnight bus, but that it left from the other major bus stop in Goa.  Oh well.
But it was worth every long minute of travel to see this place! 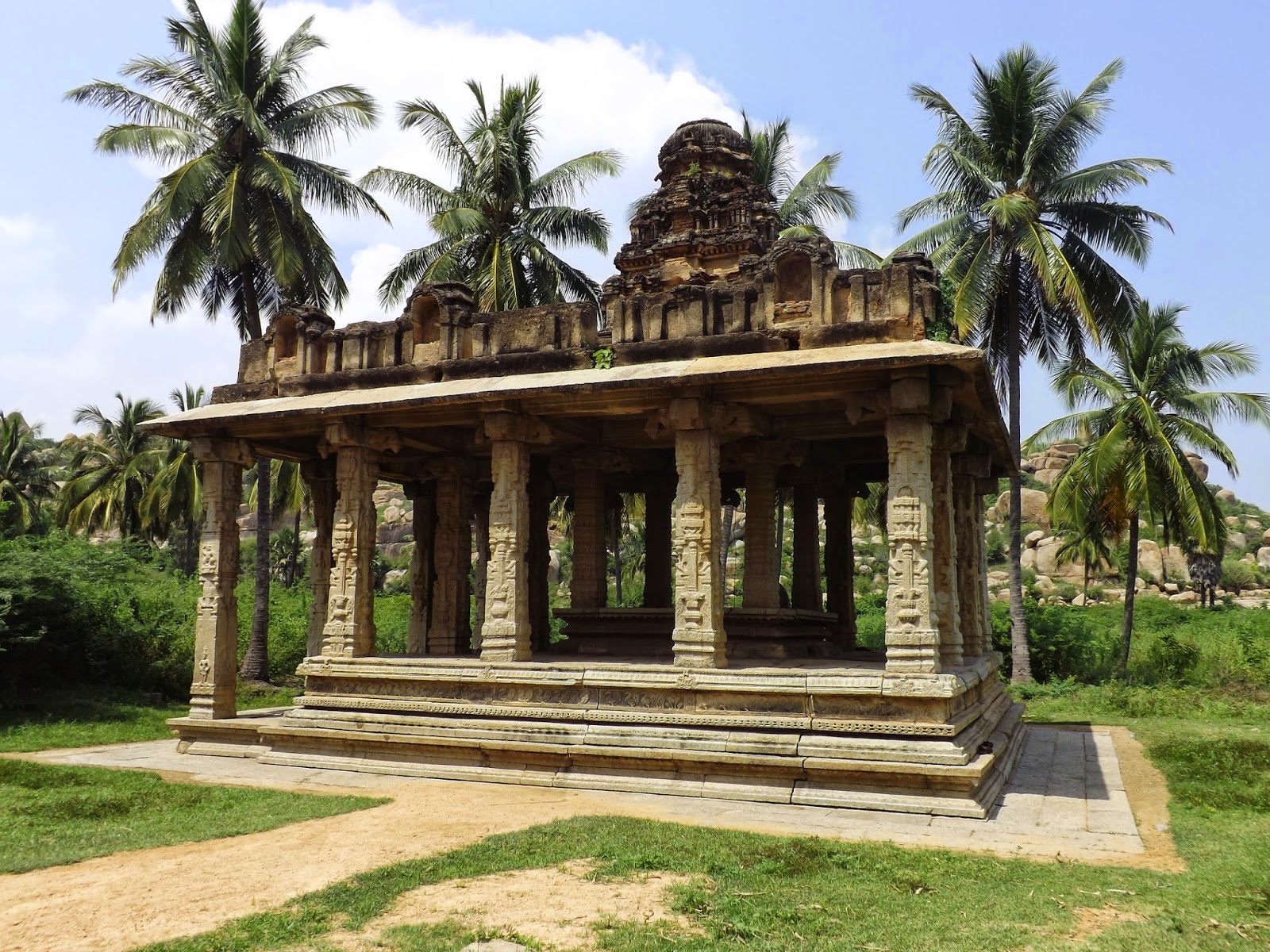 Hampi was the capital city of the Vijayanagara empire, and a major city of the subcontinent from 1343 to 1565 AD.  It was completely destroyed by invaders, who pillaged all the valuables and burned everything that they could, and was abandoned to the jungle until it was rediscovered by archaeologists in the 1800’s.  Now it is a small but flourishing tourist town comprised almost entirely of guest houses, travel agencies, souvenir shops, and restaurants serving such international cuisine as “maxican cheese bin buroda” (Mexican cheese and bean burrito), surrounded by banana, coconut and sugarcane fields. 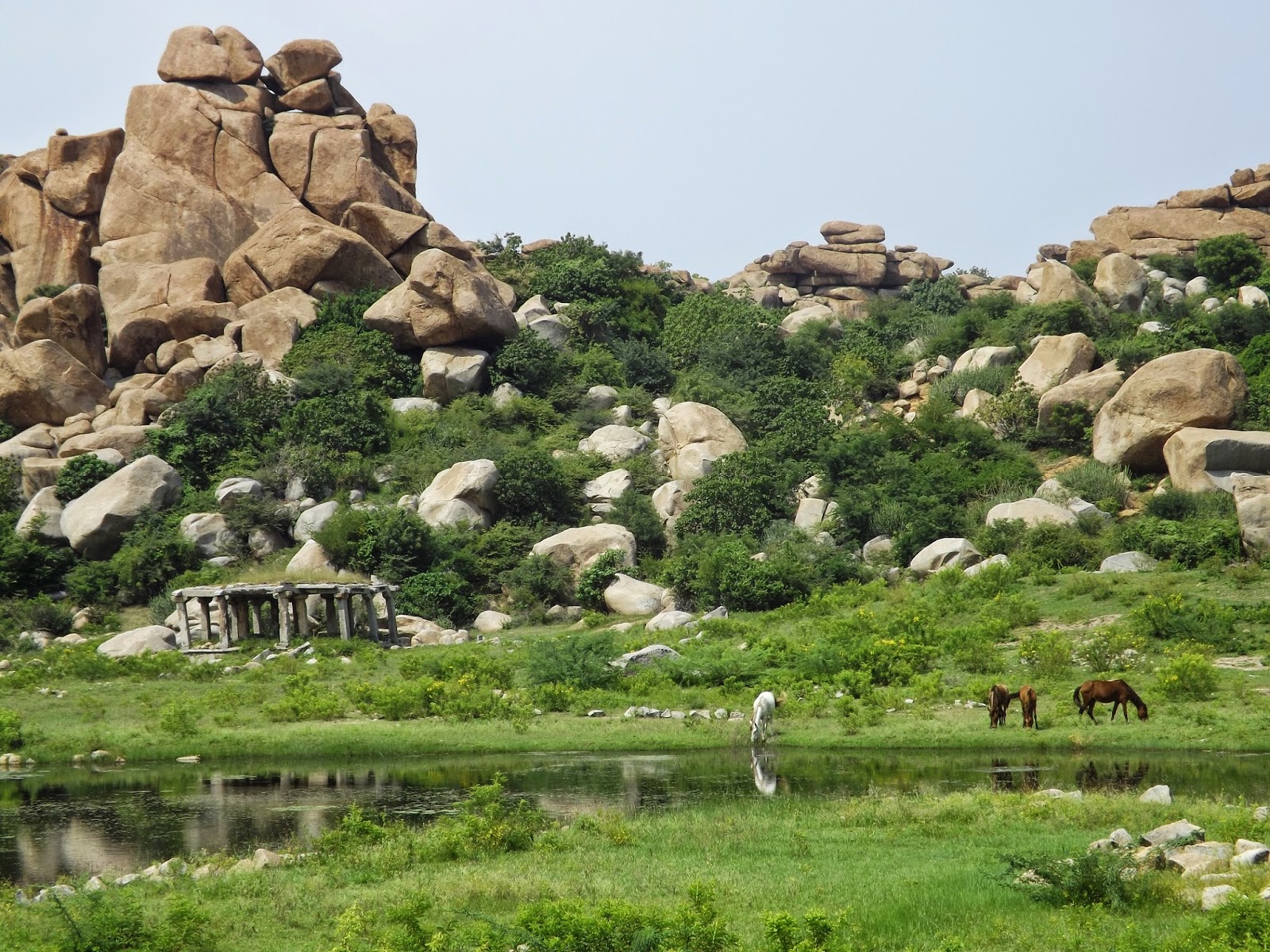 The landscape alone is remarkable.  The whole area, as far as the eye can see, is dotted by boulder covered hills.  A river snakes through them, and the old kings had built canals to irrigate the fields, which are still in use today.  The first king of the empire had selected this area for his capital because of the constant supply of water and because the rocky mountainous landscape provided natural defense against invaders (although apparently not good enough!). 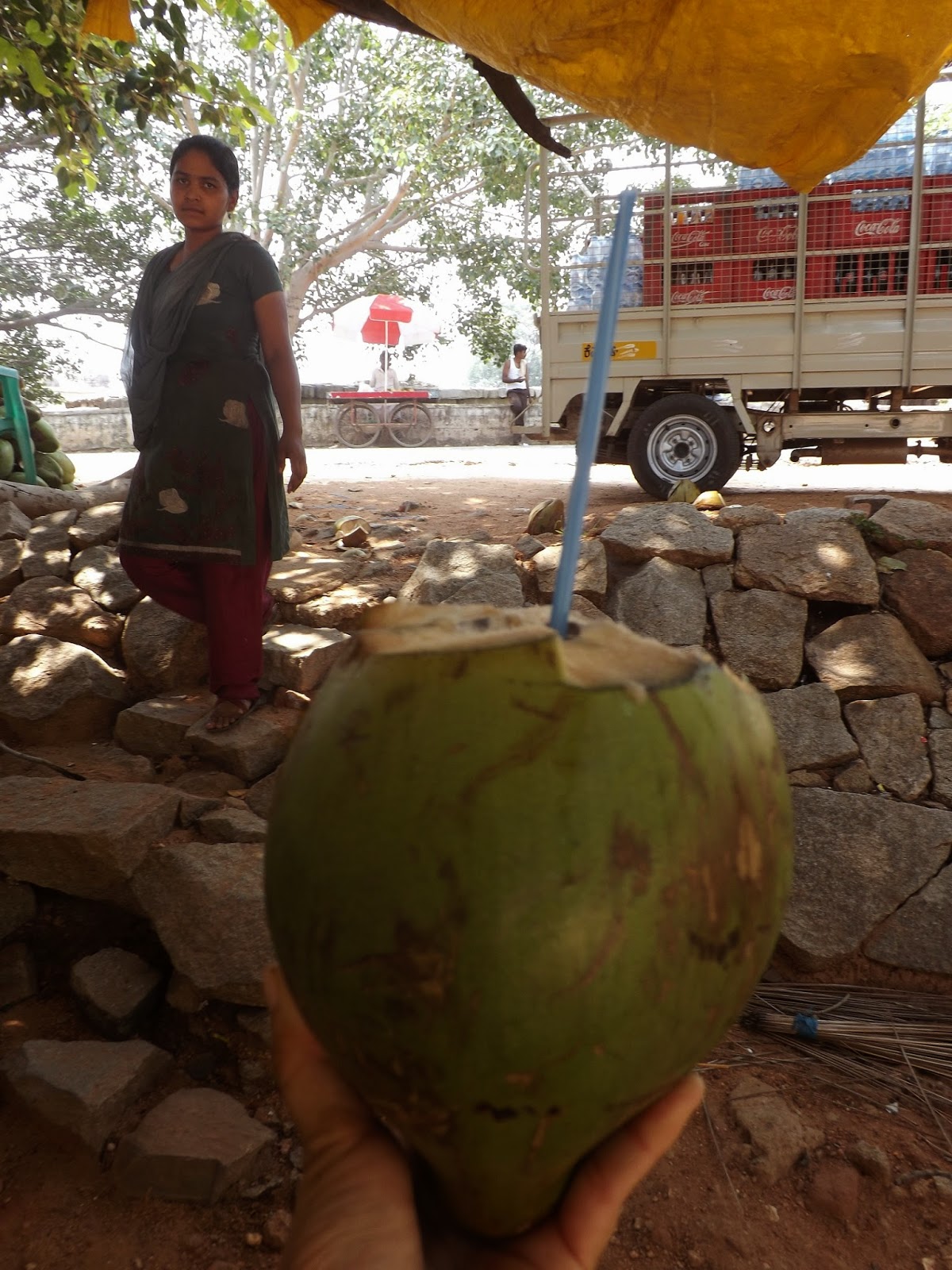 The area covered by ruins is HUGE.  It is necessary to hire a driver for the day, and it takes a full day to see all the major sites, or several days if you want to see every bit of the ruins.  I hired a tuktuk, and we toured constantly for 8 hours; I didn’t even stop for lunch but picked up snacks from street vendors along the way so I could get in as much as possible in one day.  Of which the food is again worth mentioning – popular regional street food here includes battered and fried fiery peppers, and fresh sugar cane juice with a squirt of lime (so good!). 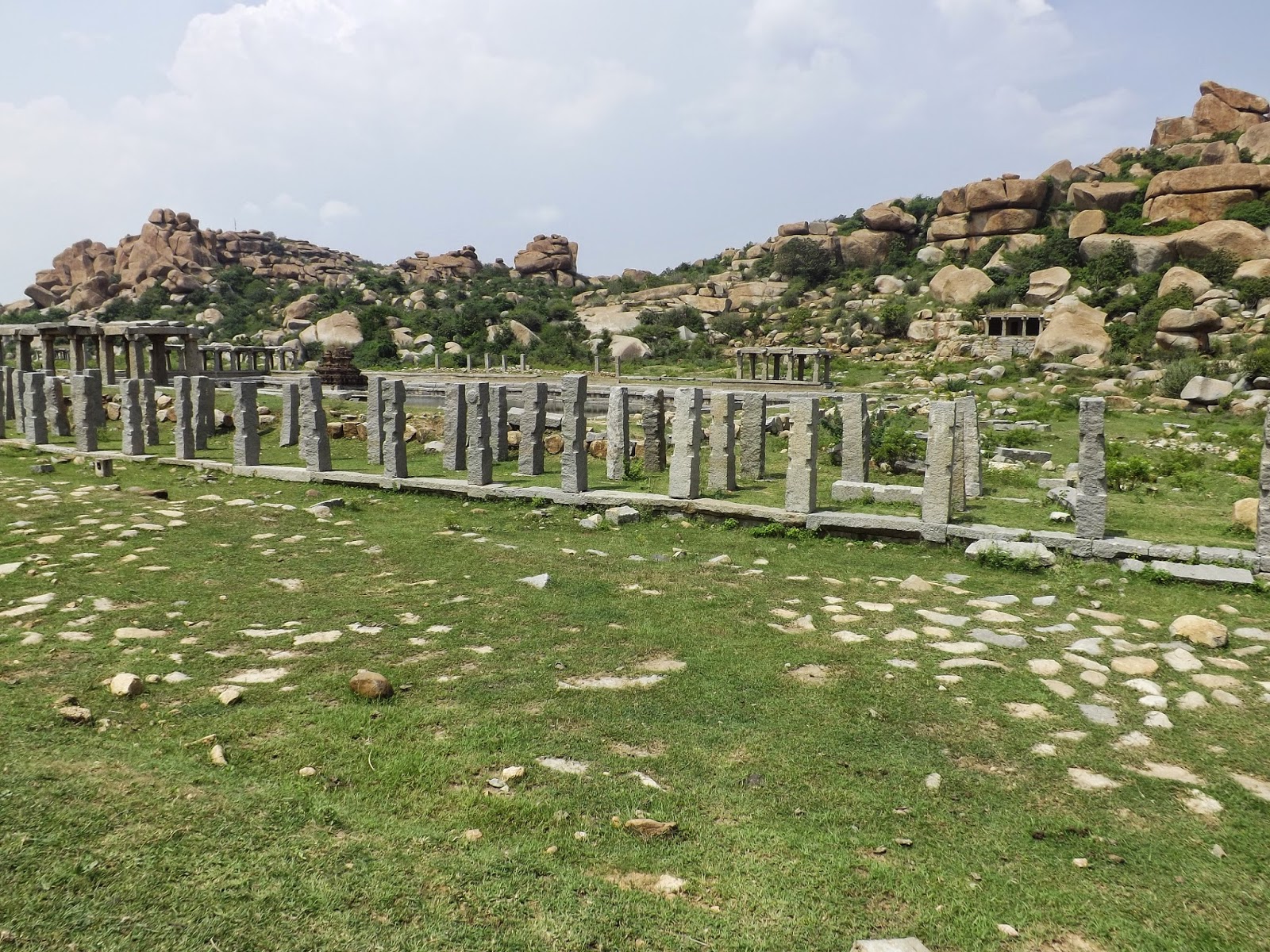 The invaders did an excellent job of destroying the city, but luckily for us the major structures and temples were built out of native granite rock, so they didn’t burn.  Additionally, the archaeologists have excavated and reassembled a lot of what had fallen down or become buried by dirt and jungle, so there is quite a bit to see.  However, this is not even the full extent of the old city, as the common man’s dwellings were all made of perishable materials, so it is unknown just how far beyond the ruins the old city actually extended, nor how many people called it home. 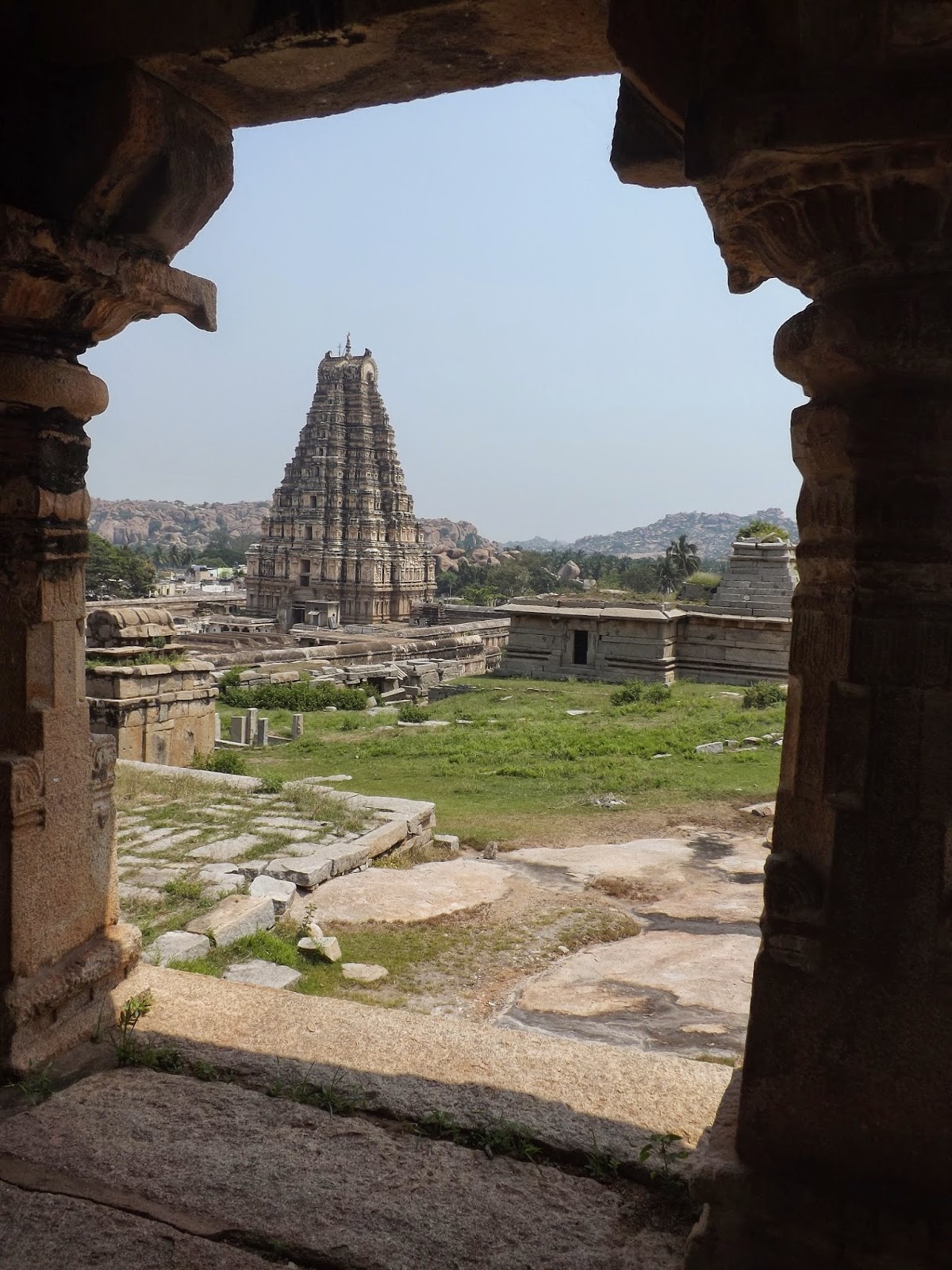 The first stop of my tour was the Virupaksha Temple, which contained the only remaining painting from the ancient empire, and a “miraculous” inverted shadow of the temple in one of the meditation rooms. It was decorated with more nagini (snake goddess) symbols than I have seen in any temple so far. No mention of Horcruxes, though… Next to this big temple, and next stop on the tour, was a hill that was covered in smaller temples.  Starting with a temple of Ganesha (elephant-headed god) with a big statue inside, I walked to see some more temples scattered over that rock face.  At the top, more temples were visible just on the other side.  Once I walked past those and around an outcropping of boulders, there were even more temples.  And at the crest of that rock face, there were more temples heading down the other side.  Some were fairly large, some were tiny, and they were put in every conceivable location, including a itty bitty temple perched on the top of a boulder at the top of a hill. 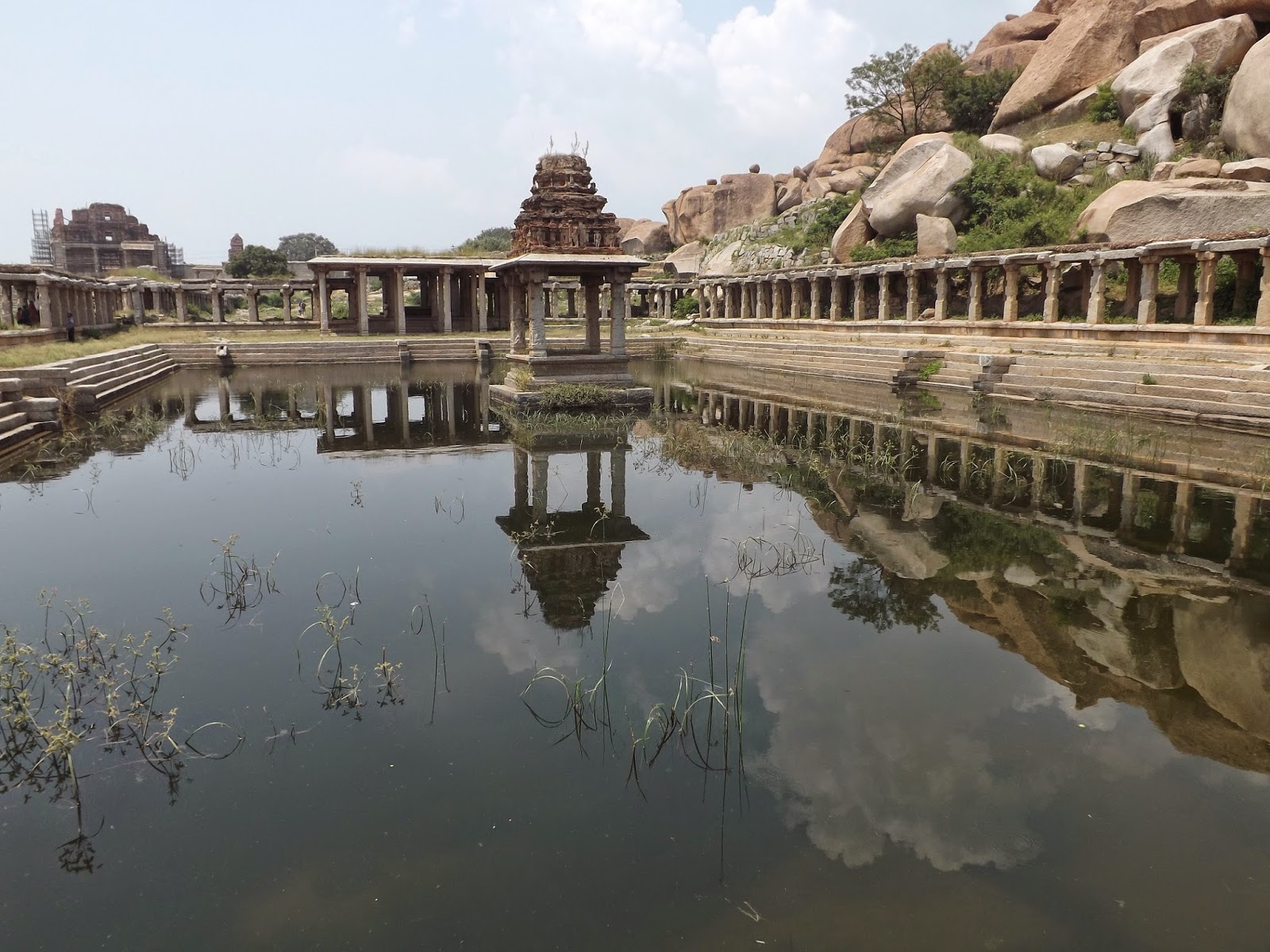 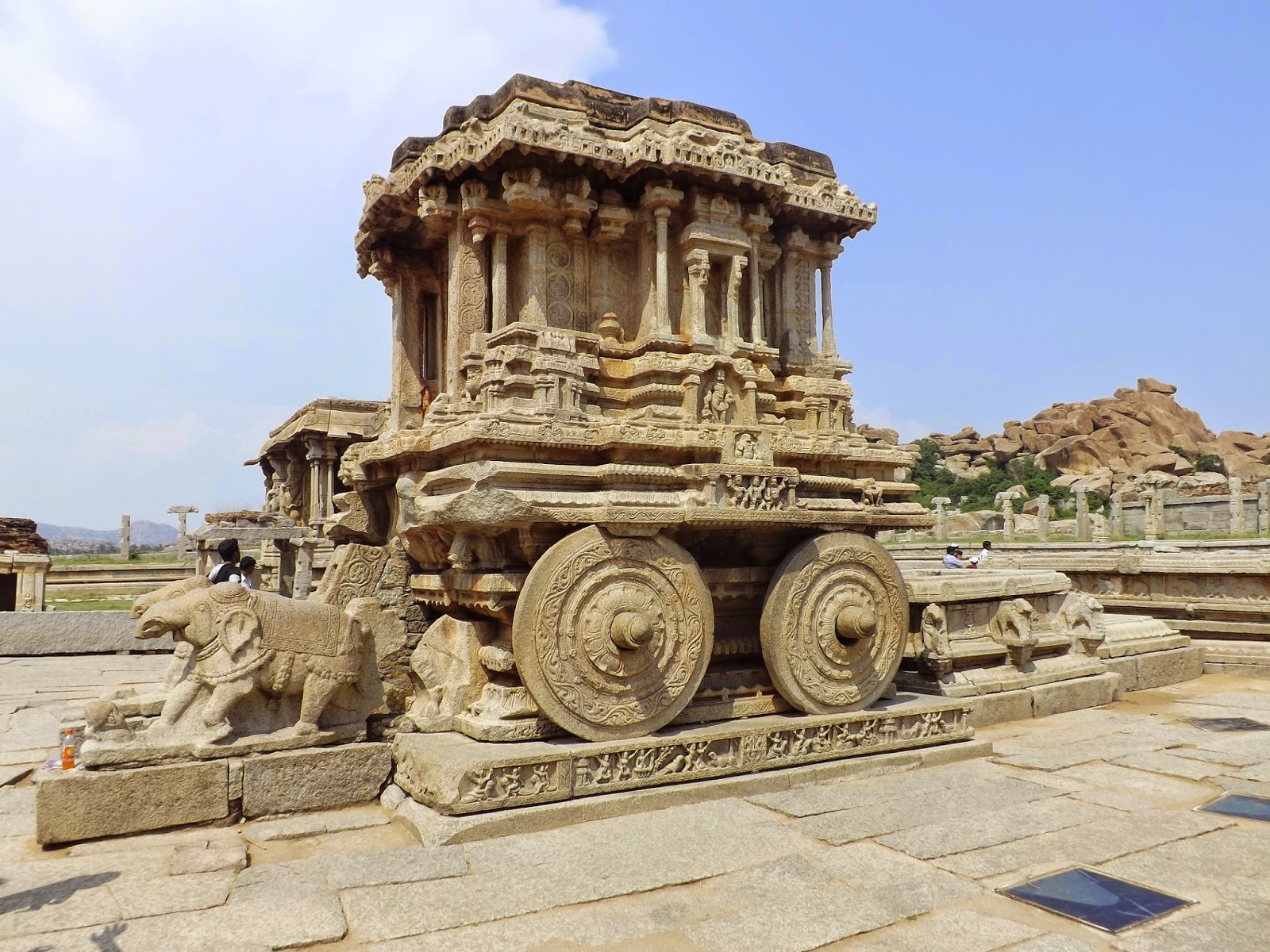 Following the ancient canal road, we headed to the most famous place in Hampi.  It was… (drumroll, please) …. a temple.  But not just any temple! This temple featured the fabulous “stone car,” a very large and beautifully ornamented stone carved statue of an elephant drawn chariot.  The wheels of the chariot were built to be able to be turned on their axels. 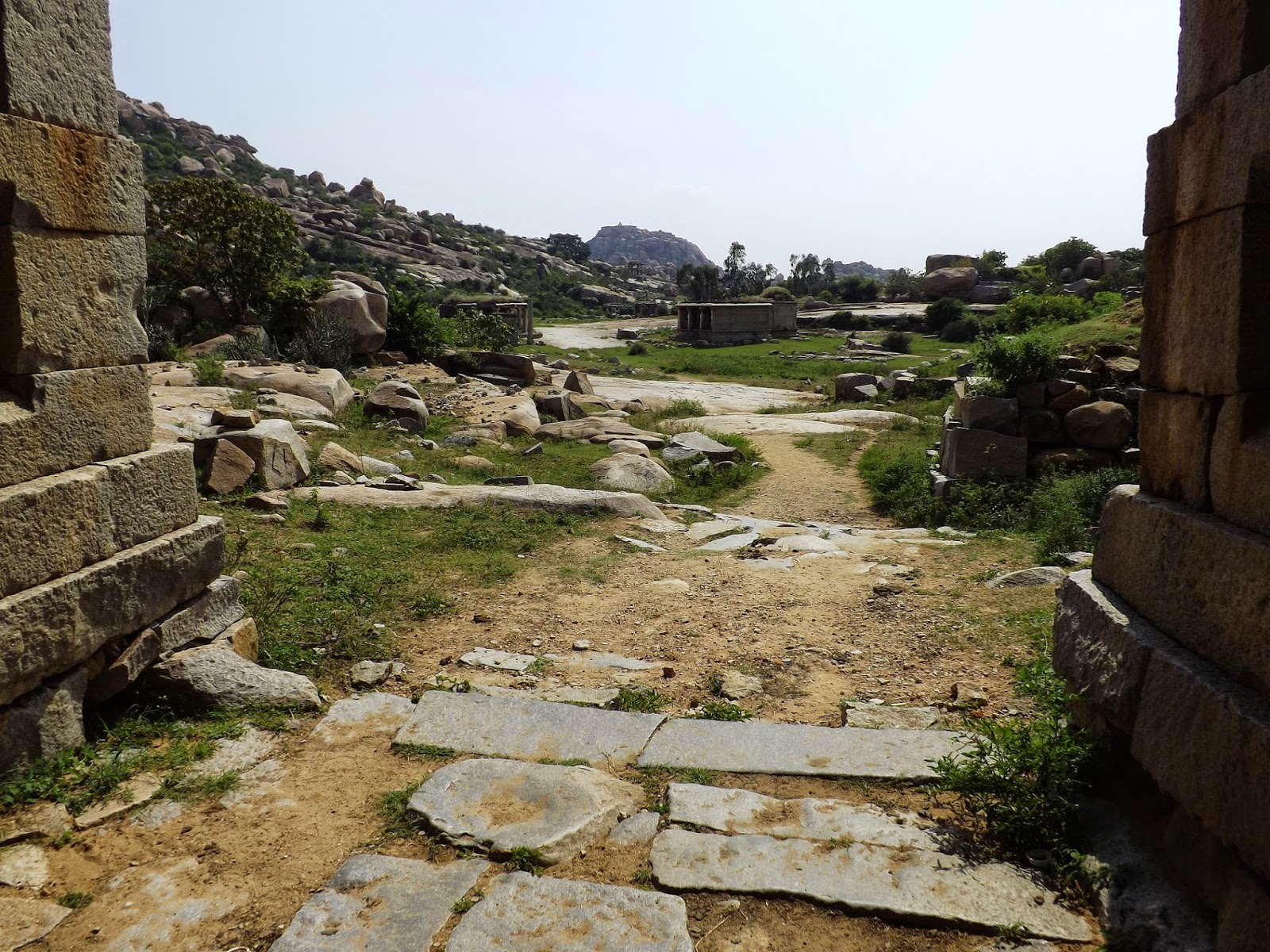 Behind this temple, a path led to the well-known “king’s balance” which was a huge scale for the royal treasury.  I followed the signs looking for it, and walked under it several times without realizing what it was, because it was so big it looked like a gateway arch to the next valley.  It was only when I was at a restaurant later, looking at a book about Hampi, that I realized what I had seen. The photo above was actually taken while standing underneath it! 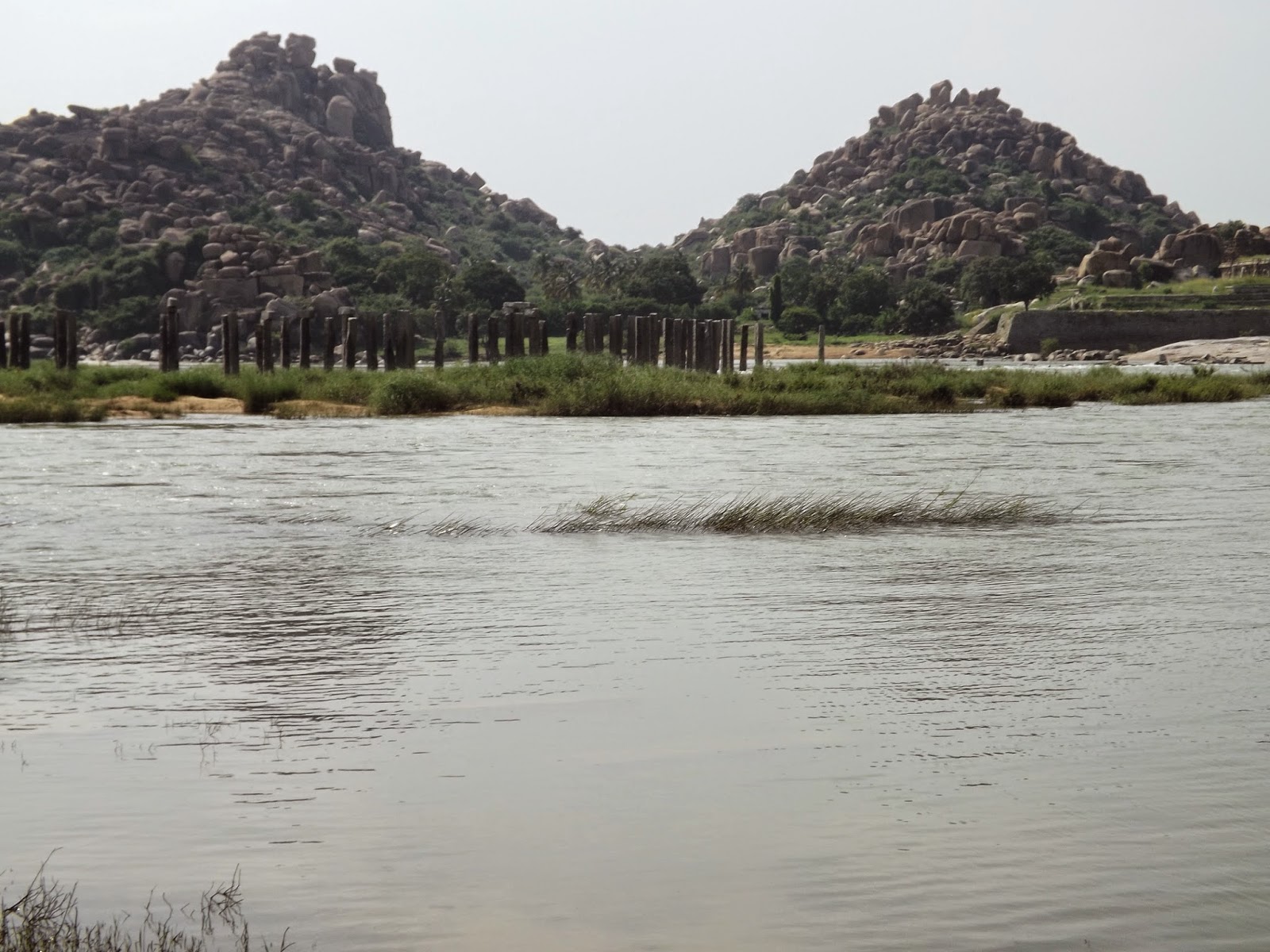 I had overlooked it in part because I was overwhelmed by the sight of the next valley.  Stretching for quite a distance, and no doubt further than I could see, were lots and lots of temples.  They were all starting to look the same, so I skipped over it, and headed down to the river to see the remains of the old bridge.


Next was a stop at the museum (labelled on my official sightseeing map as the “meusium”), which was a repository for a lot of temple statues but not much else.  The only other point of interest there was a big diorama of the ruins, which was useful to get an overview of the geography of what I’d been seeing. 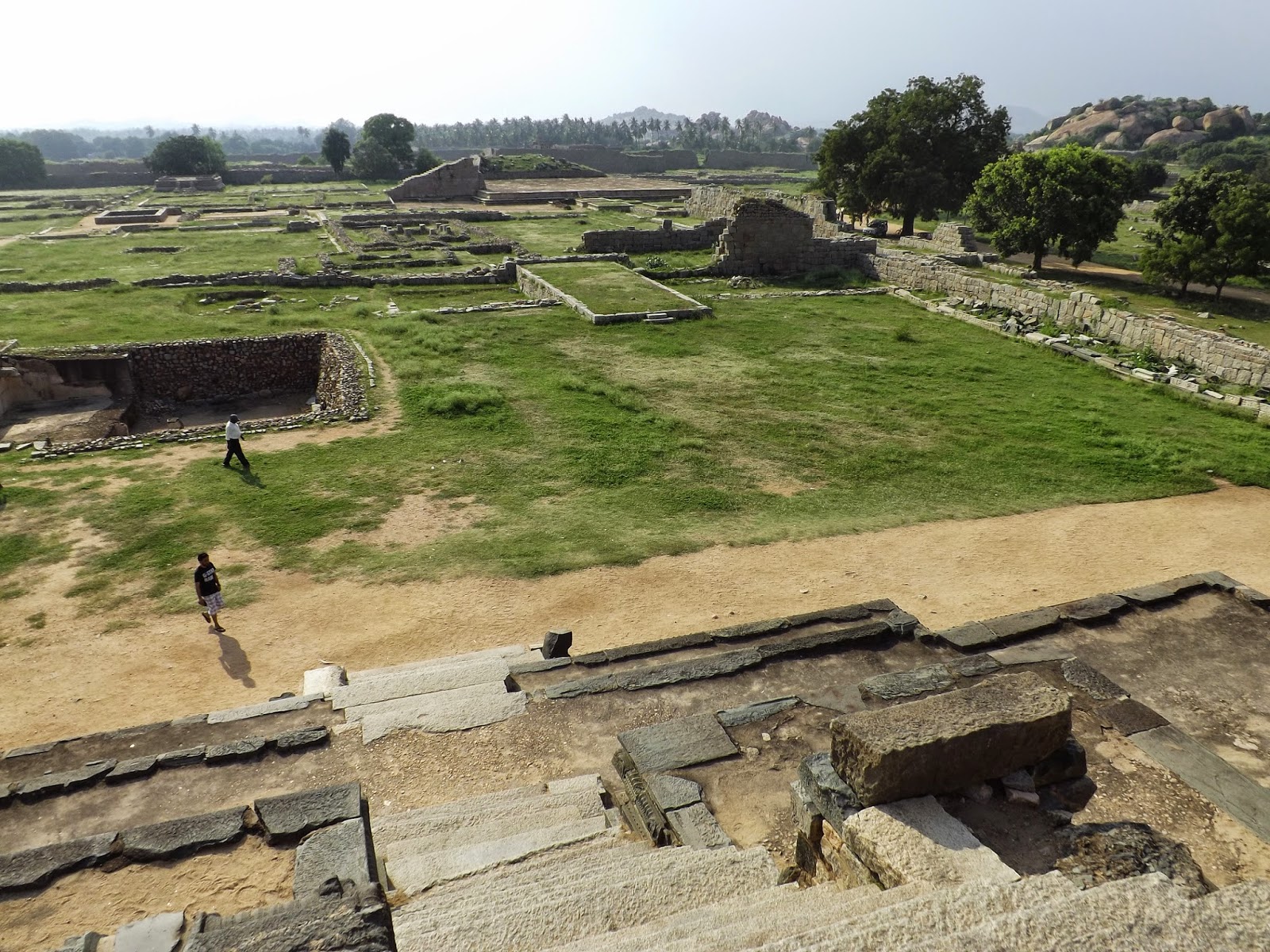 The last area to visit was the “royal quarters” (and its associated temples, of course!).  The king’s palace was only visible by its foundations, except for a beautiful bathing pool and a large platform that is thought to have been where the king sat to watch festivals and other performances.  It certainly had a great view from the top, as you can see from the above photo. 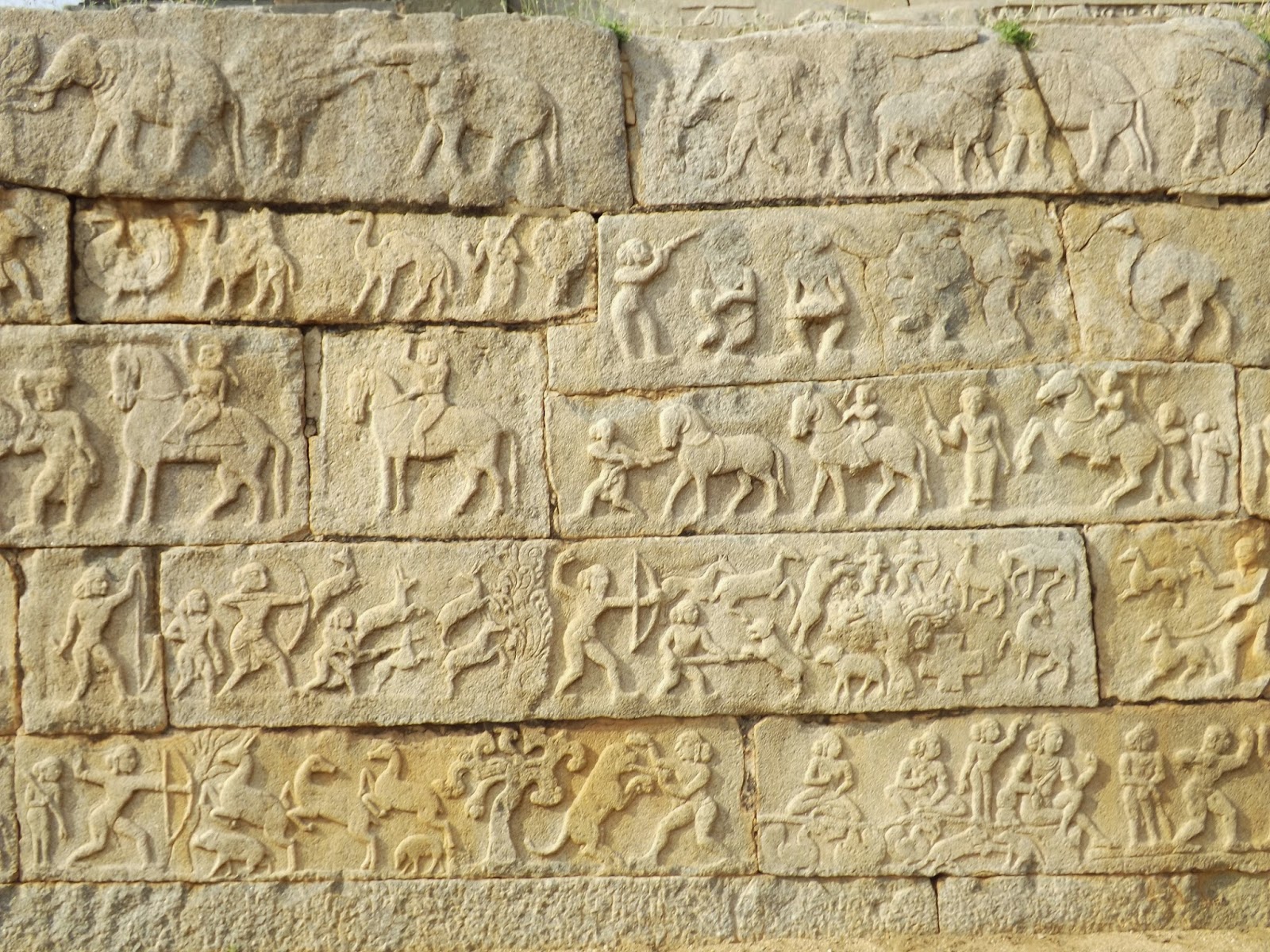 The art on the side of the platform was some of the most interesting of all of India.  Having studied Greek art in college, I was struck by the similarity of some of the famous friezes of the Pantheon which were acclaimed for the representations of horses in motion.  Those were, in my humble opinion, nothing compared to the friezes on the walls of the platform.  All across it were horses, camels, elephants, food soldiers, dancers, and wild animals, each unique in its depiction.  Parades, hunts, festivals, and more were clearly and beautifully rendered in stone. 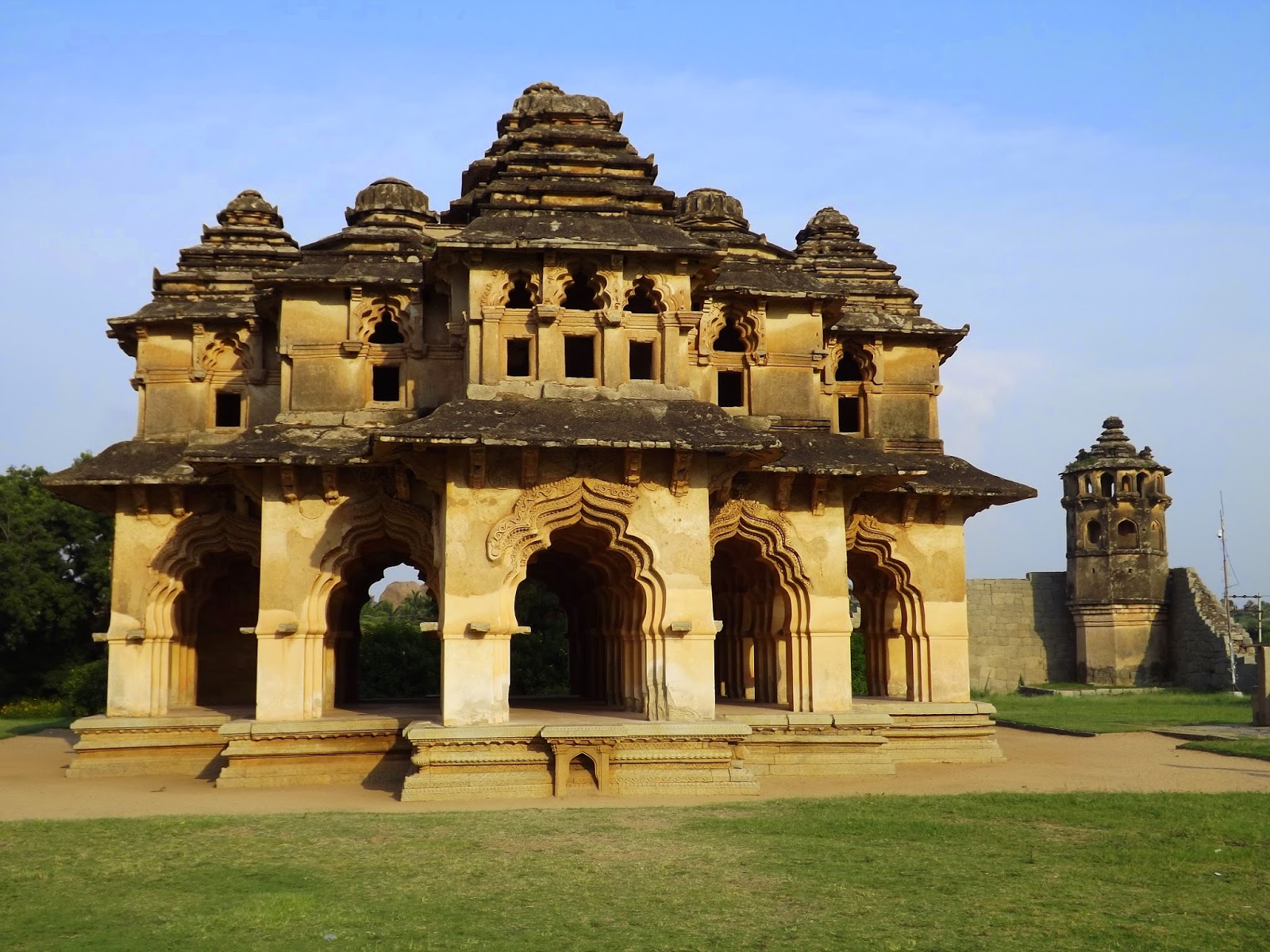 The queen’s quarters were nearby, built later in the empire in a style greatly influenced by the Muslims of the north.  While the main palace had been destroyed except for the foundation, several lovely smaller buildings remained, as well as a pretty park where I could easily imagine the royal ladies lounging about. 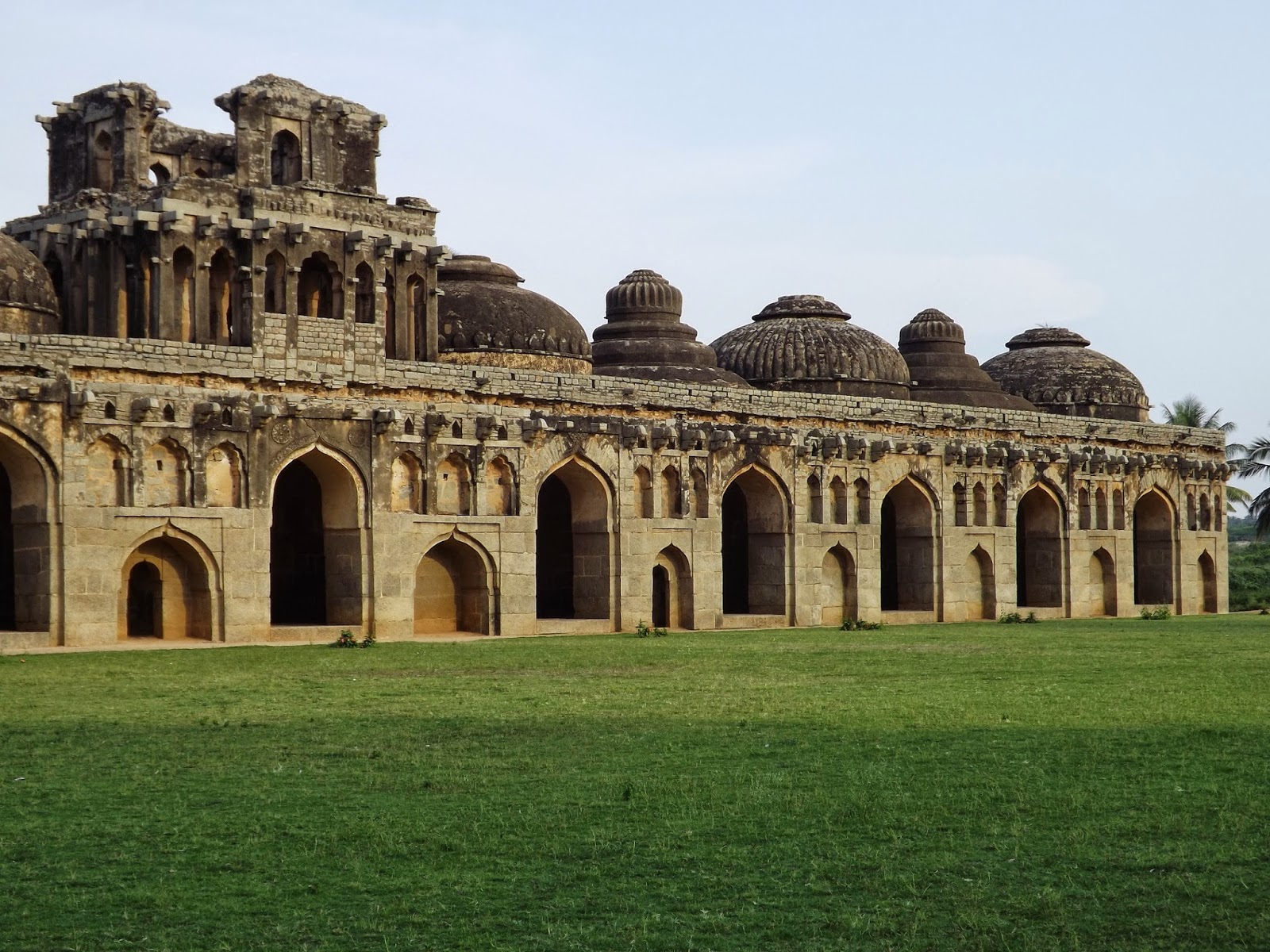 Last but not least, I visited the elephant stables.  Actually, the historians are not certain that this building did in fact house elephants, but it is clear why this is the prevailing theory.  Each “stall” is huge, and could certainly fit a full grown elephant.


On the way back, we passed – you guessed it! – more temples.  But it was dinner time and I had seen enough Hindu temples in just one day to satisfy me for a lifetime.
Posted by Meredith Cherry on October 14, 2014