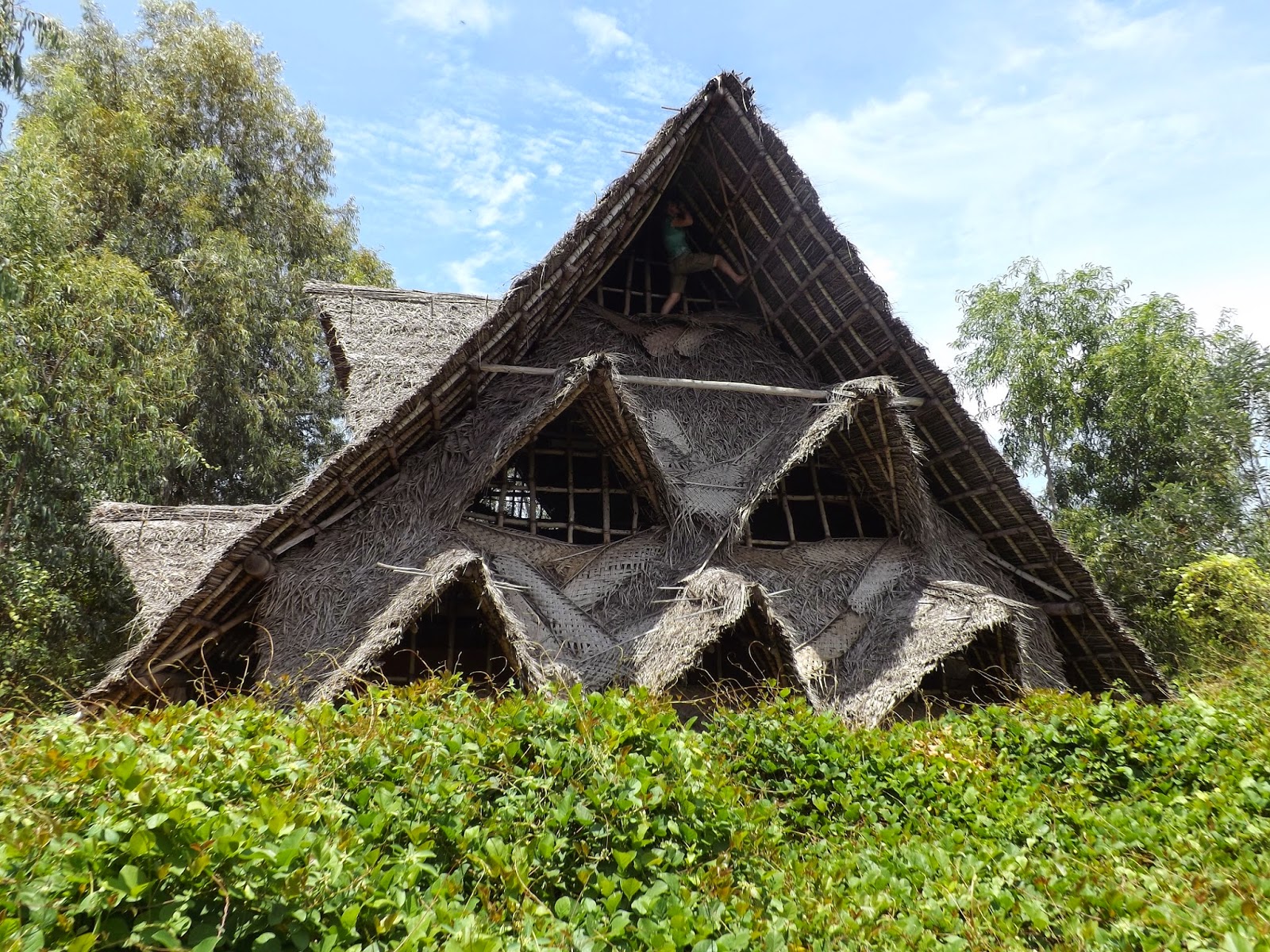 Southern India seems to be very different from Northern India, although I have only seen two cities to base that on so far.  Pondicherry was formerly a French colony, and when I stopped at a small store there the shop owner asked me if I could speak French to him to explain what I needed.  The drivers seem less crazy, although maybe I am just getting used to them.  The streets are cleaner and the buildings are better maintained.  A lot of the women wear flower garlands in their hair (I thought that was only in poetry!). 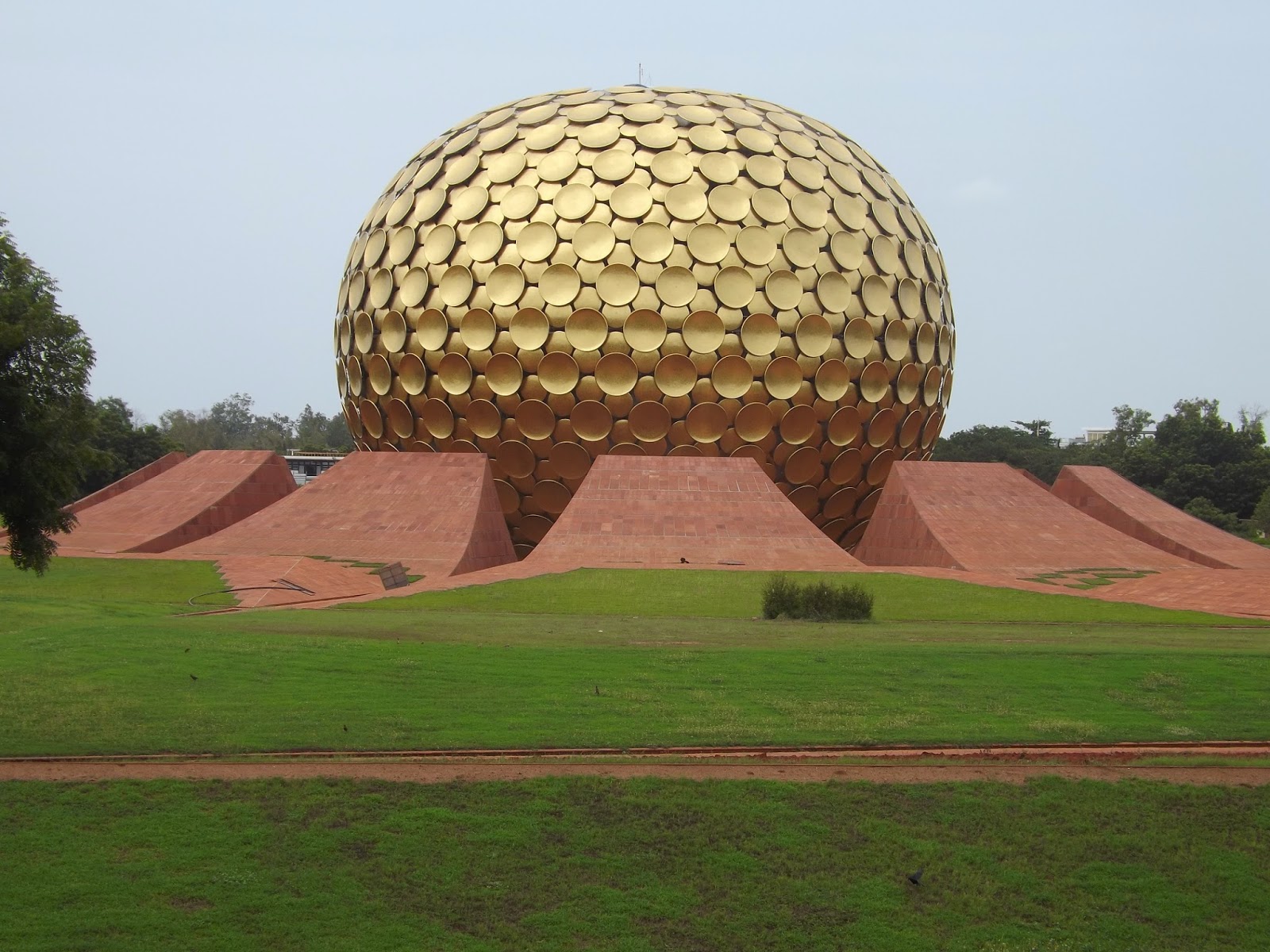 Auroville is a very special place, unlike anything else in India and probably unlike anything else in the world.   It was founded in the 60's as a community for like-minded spirits, and it still attracts a bunch of hippies, artists, and new-age spiritualists.  It is thus home to a large number of foreigners, and has a diverse selection of shops, restaurants (I can drink kombucha here!), workshops and classes.  I have gone to several workshops there, including “free” dancing (essentially a big dance party of people moving to the rhythm in a spiritual setting), and an open mic event with all kinds of artists from the community sharing their work.  The spiritual center of the community is the Matrimandir, which reminds me of a golden Epcot center. 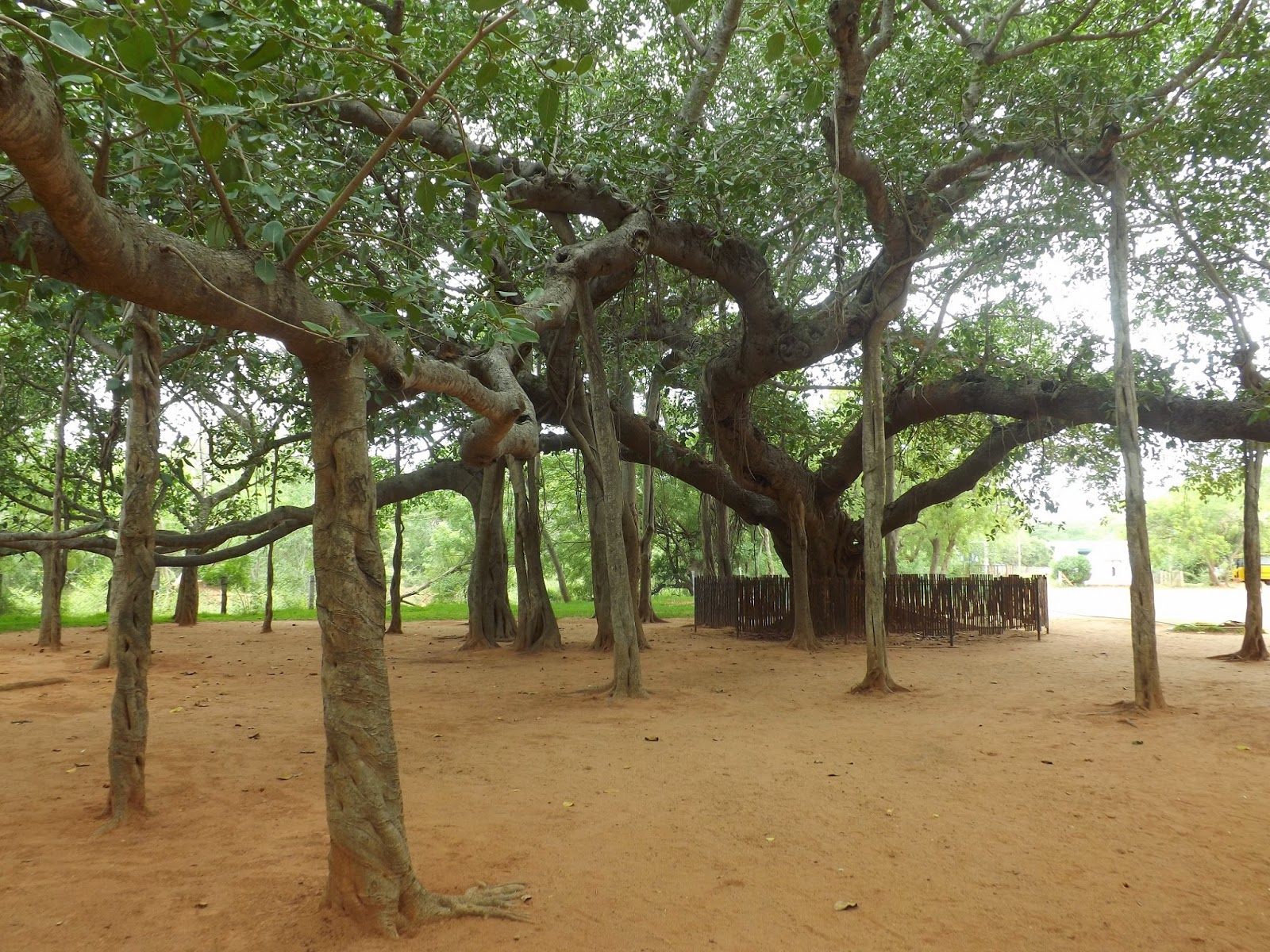 The physical center is the sacred banyan tree nearby, which is amazing.  Banyans grown aerial roots which turn into more trunks to support their massive branches.  This particular tree is about a hundred years old and has dozens of trunks.  This tree was specifically named by the Mother (the founder of Auroville) to be the geographical center of the town. 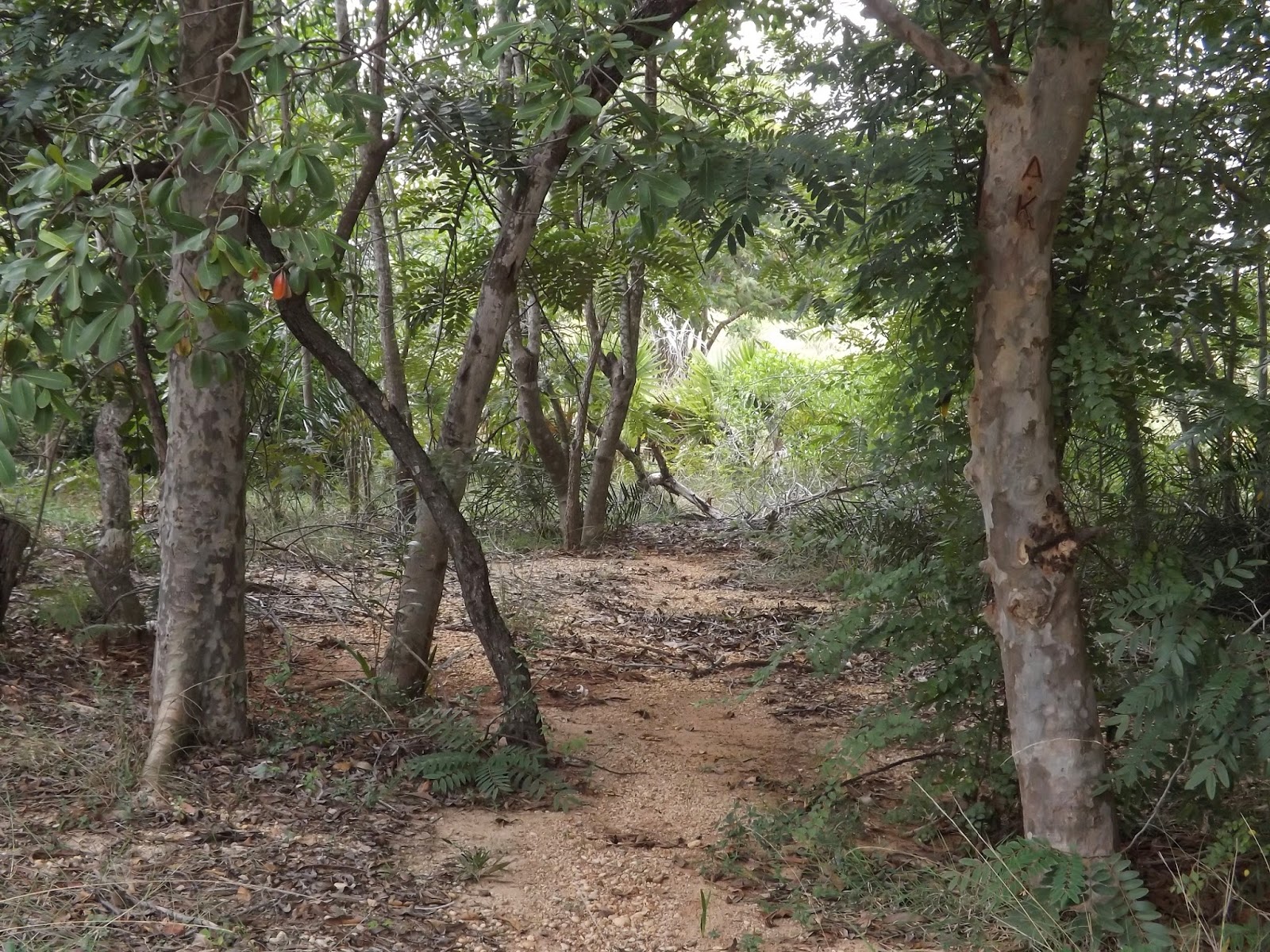 The place I am staying at is called Sadhana Forest, and it is part of the Auroville community.  It was founded ten years ago by an Israeli family whose goal was to create a community that would restore the native forest of Tamil Nadu, which is unique and endangered.  They have about 70 acres of land which they have mostly restored (only ten years ago, the land was mostly a big dirt field), and they also take care of some surrounding government land.  More recently, they also established tree projects in Haiti and Kenya. 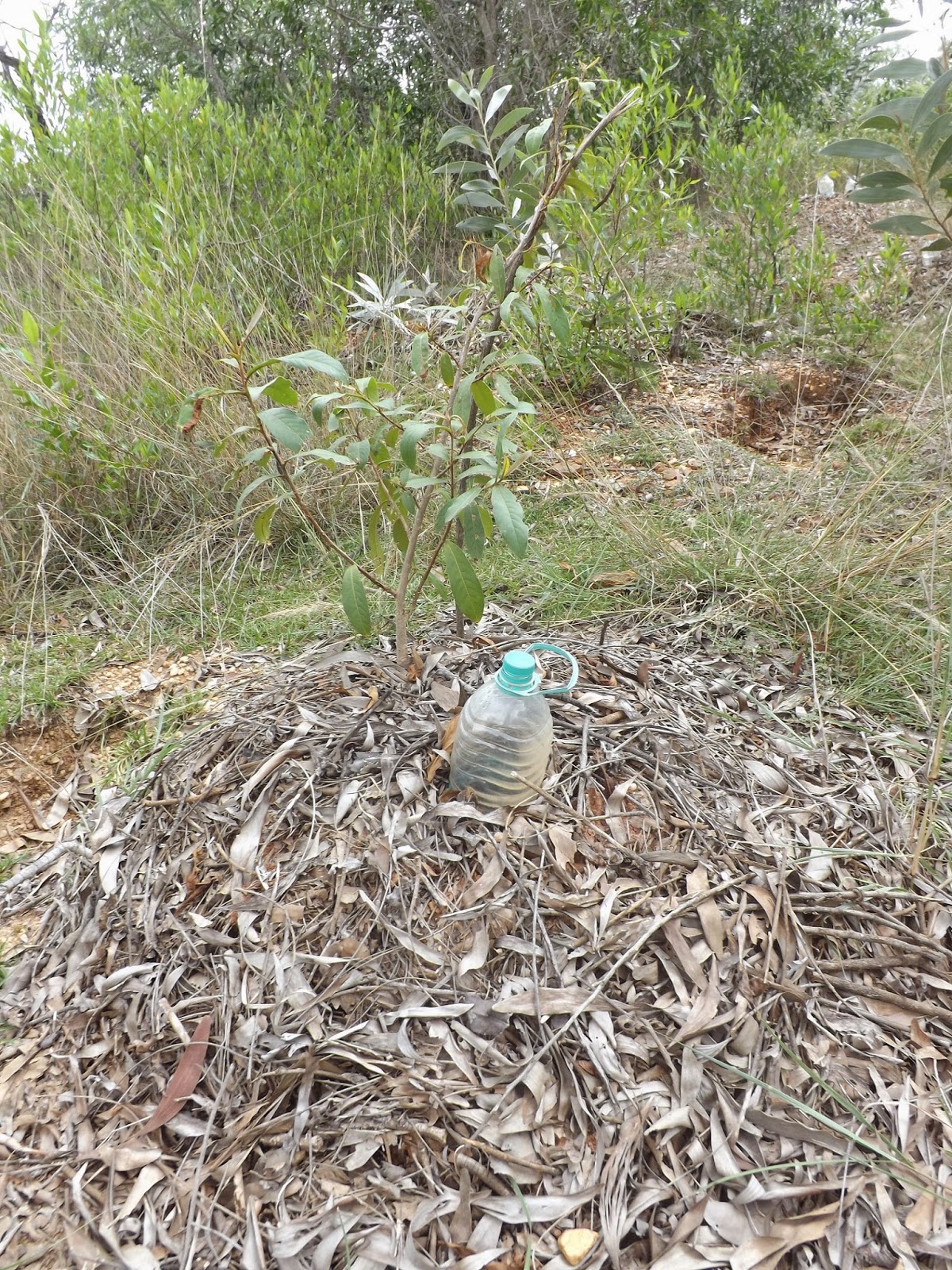 They use permaculture techniques and their own innovations to have a near-100% success rate on the trees they plant.  One of the most unique things they do for their trees is to plant them next to water bottles with a wick out the bottom, so they can be watered directly at the root zone. 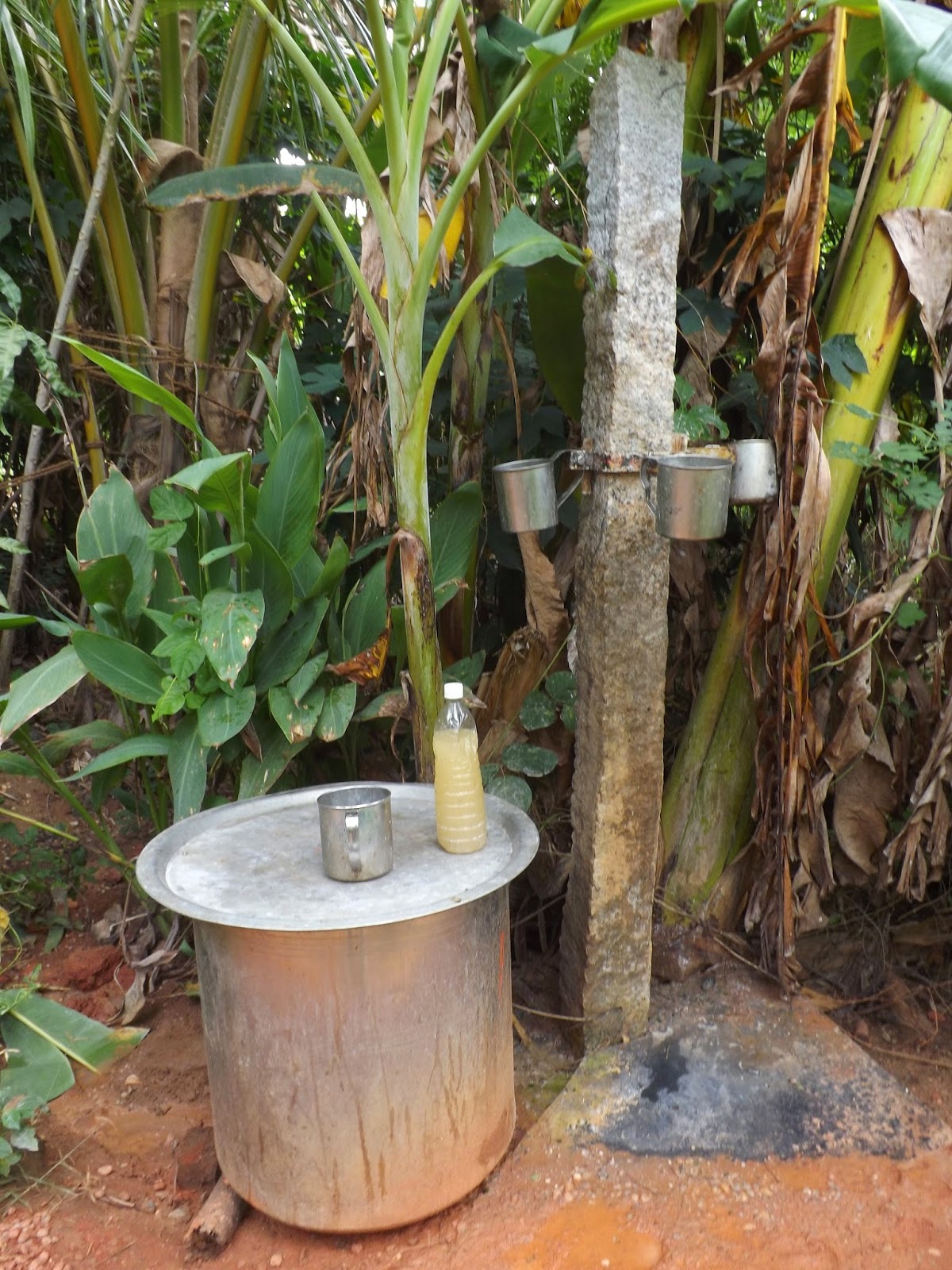 Water conservation is a big issue here.  Apart from the forest work, the whole community is run on as little water as possible.  The toilets are all composting, and the graywater is recycled for watering the closer parts of the forest.  Baths are taken from buckets, and also laundry is done in buckets, the water from which is used to water the plants.  Dishes are all done by hand in a series of buckets so dozens of people can wash their plates with only about 15 gallons.  There are also hand washing stations (cleverly situated within the gardens to catch the runoff), at which a tiny bit of water is poured in a cup with a hole in the bottom to provide a steady stream for rinsing. 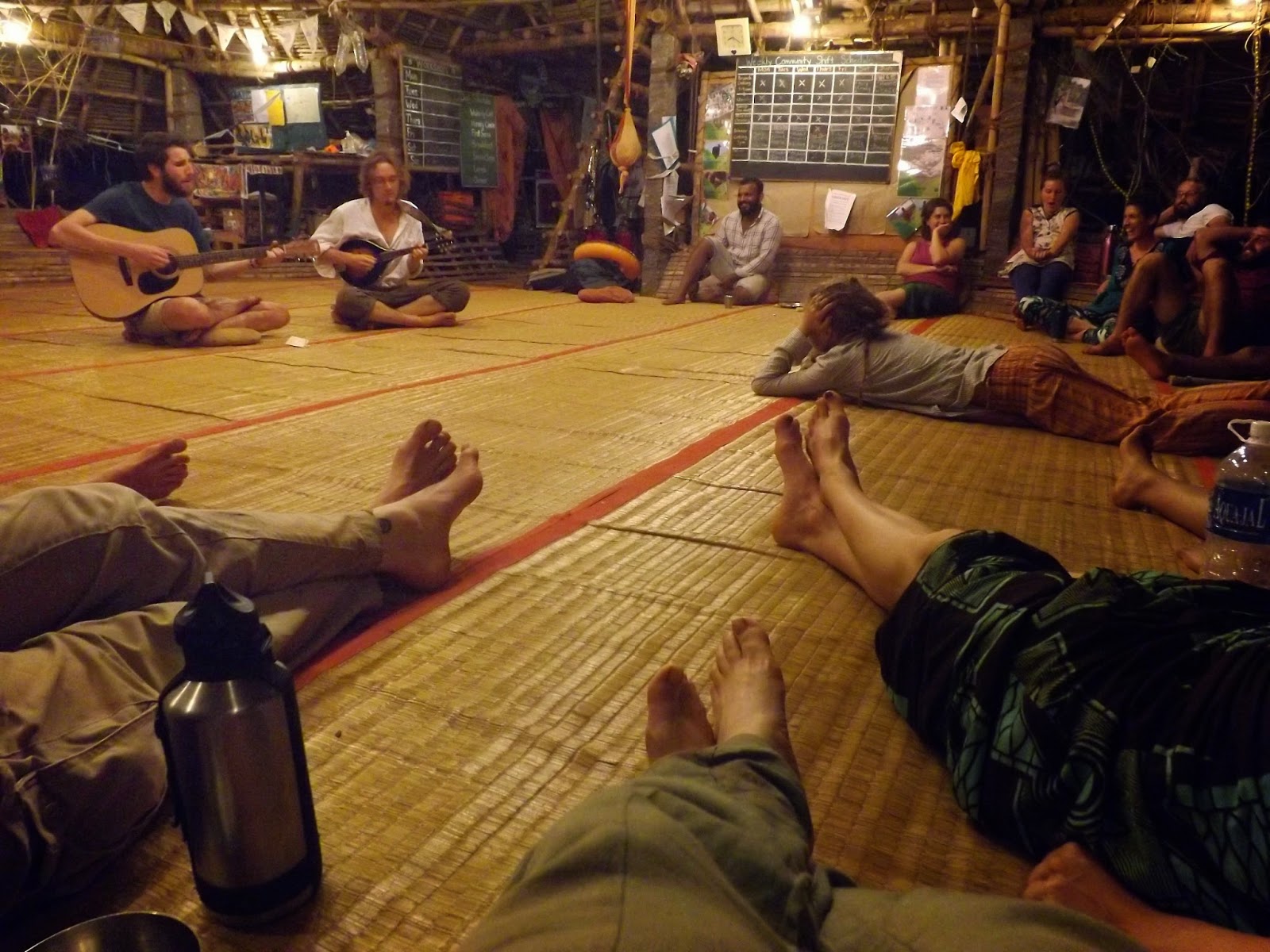 Sadhana attracts hundreds of volunteers every year, some of whom only stay two weeks, and some of whom stay for months or years. My stay was for three weeks. Most are foreigners, but there are also quite a few Indians who come from across the country to contribute to the project.  Of the foreigners, they are predominantly Israeli, but there are also many Americans, French, Germans, and a handful from other places like Sweden and Australia. 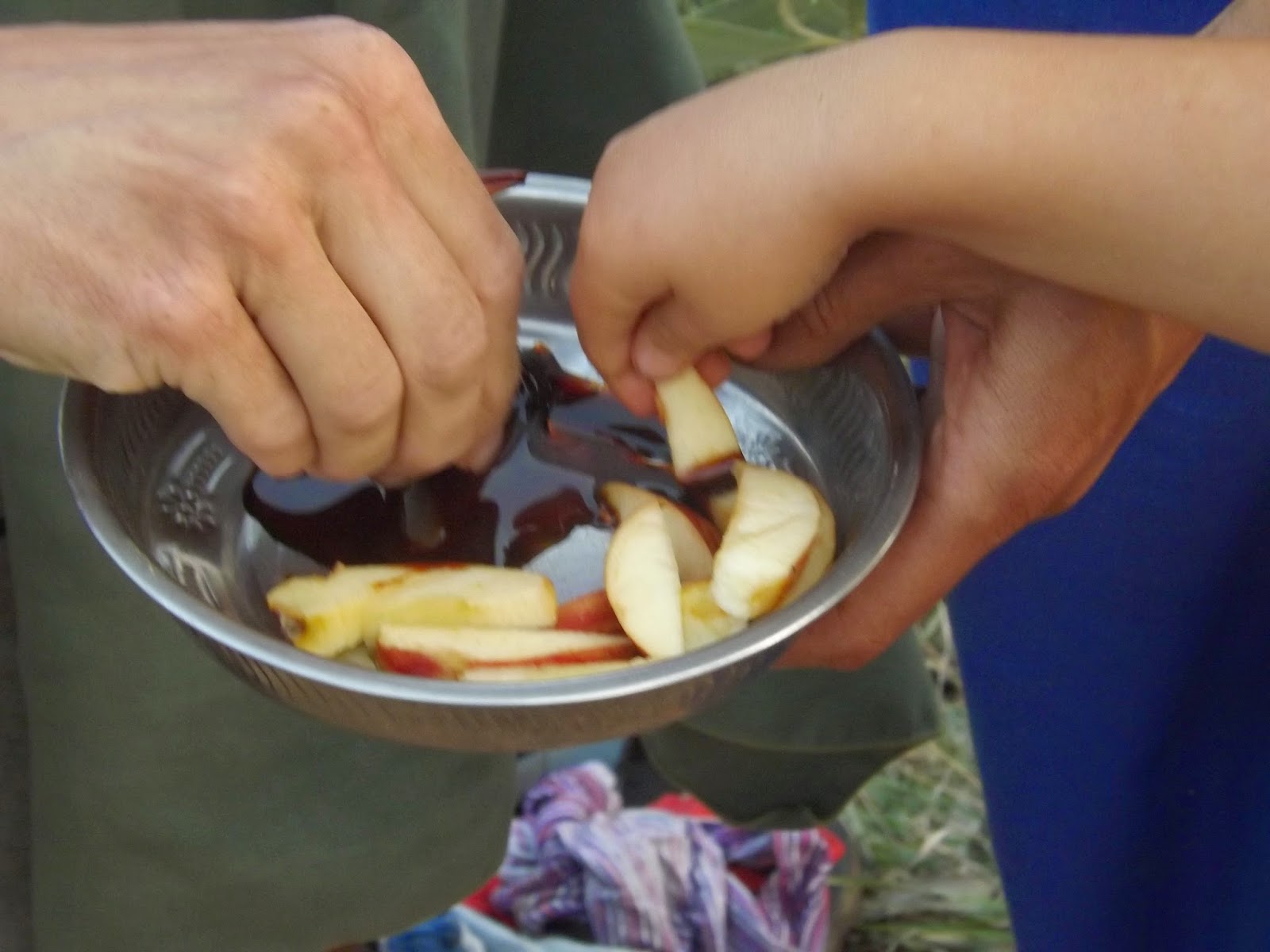 Despite the vast differences in backgrounds, Sadhana really feels like a big family, the more so because there are also children running around from the families that volunteer here.  Everyone is welcomed into the community and encouraged to join in on the many activities going on, both in Sadhana and for trips into Auroville.  One of the most amazing cultural exchange type activities I experienced here was a Rosh Hashanah (Jewish New Year) ceremony hosted by the Israelis.  Kids and adults all participated in eating symbolic foods (pictured above), making resolutions that we set sail on paper boats, and singing songs. 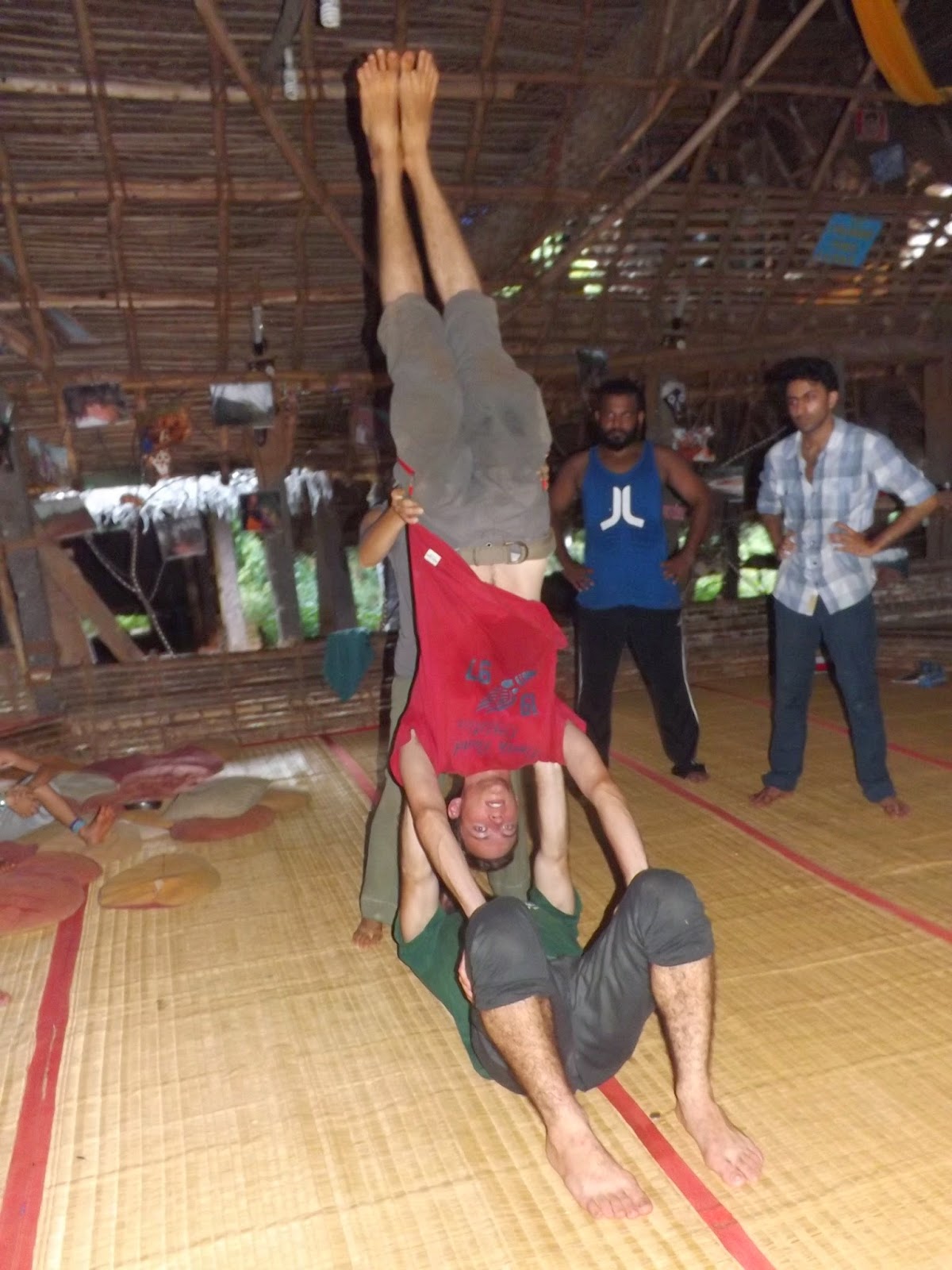 The community runs on a very regular schedule, with everyone helping out with all aspects of the community.  At dawn, everyone is woken by a volunteer who walks to each hut and sings wake-up songs.  Half an hour later, everyone gathers at the “morning circle” to get energized and prepared for the day.  It reminds me of summer camp around here, both for this morning routine and in the evenings when we have community games, songs, and “non-talent shows.” There are also regular workshops put on by the volunteers on everything from creative writing to “acro-yoga” (taught by a trained circus acrobat). 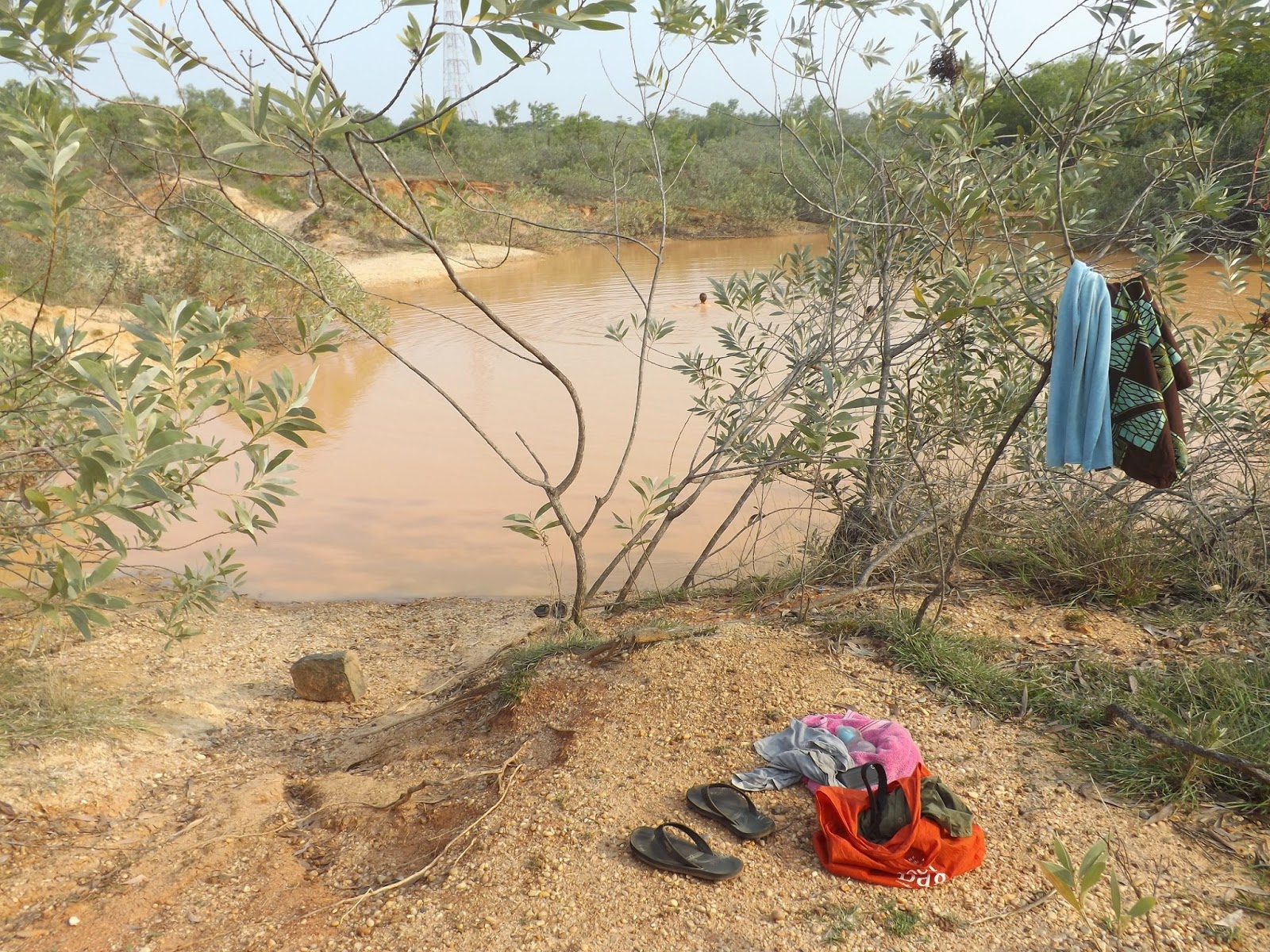 A swimming hole on the property is available for cooling off, and a more distant quarry is also great for swimming. 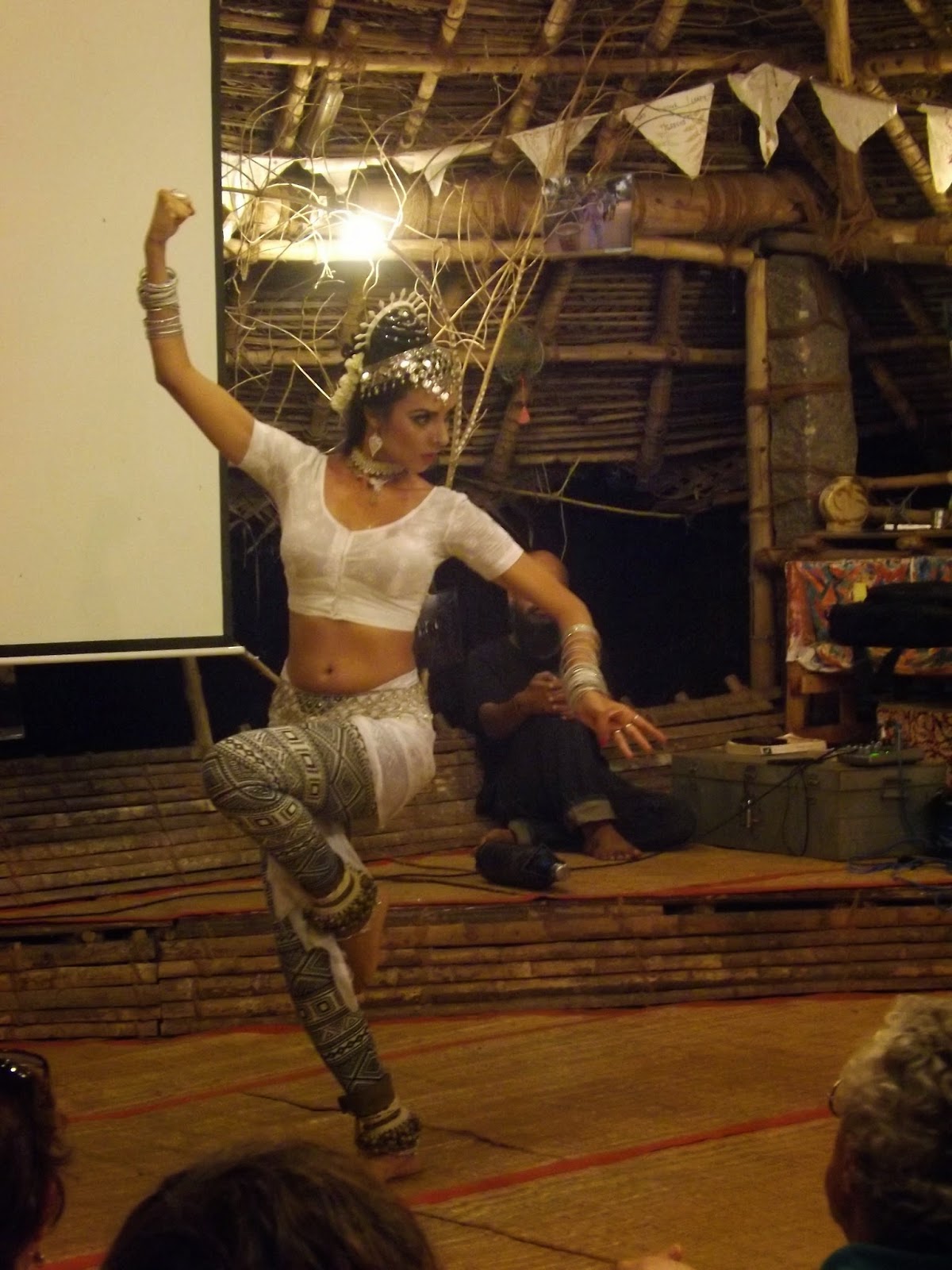 Every Friday, Sadhana hosts a movie night for the Auroville community, where an environmental documentary is shown, followed by a performance of traditional music or dance by local performers. 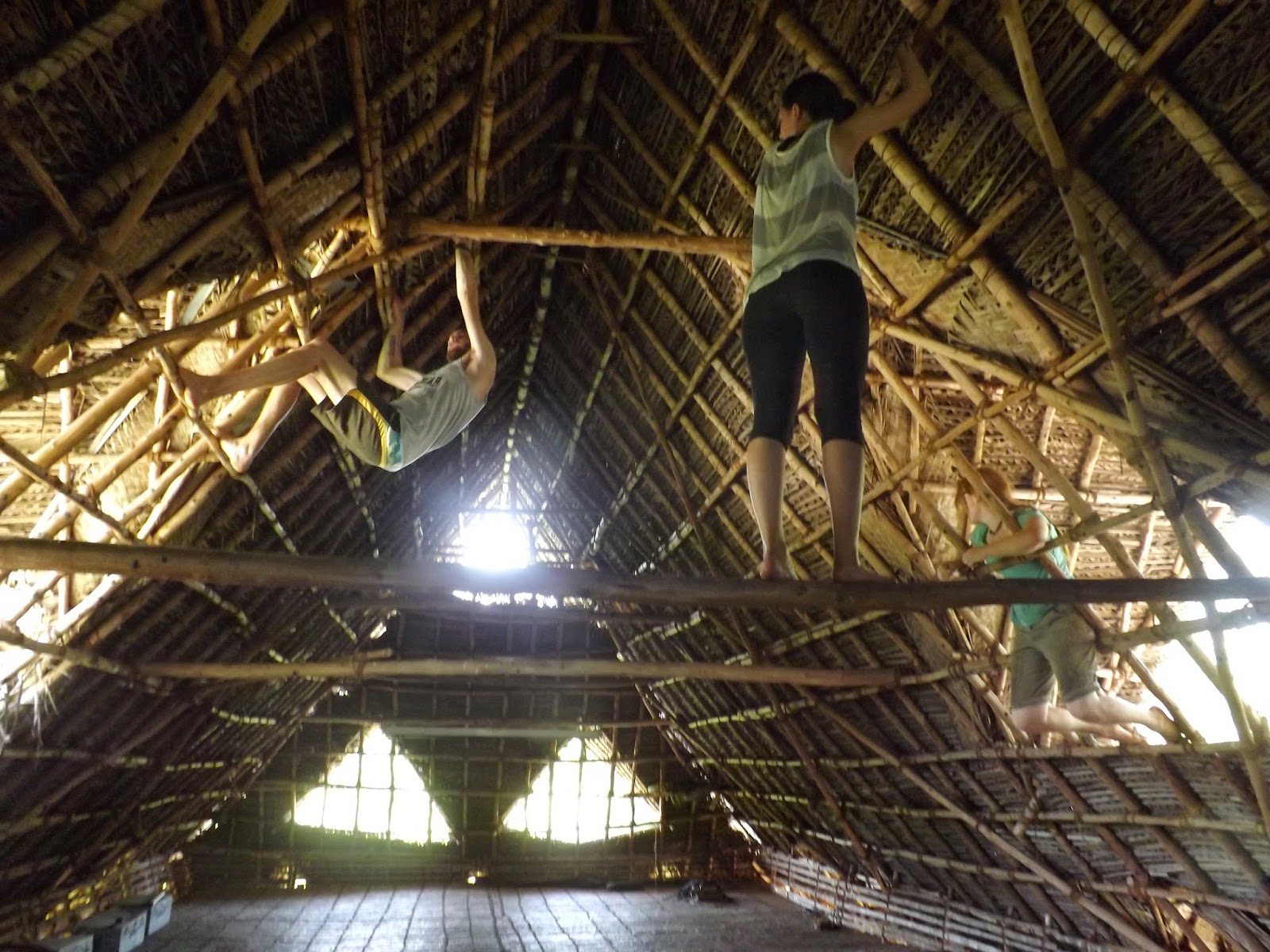 The morning is devoted to working, and is divided into two shifts, called sevas (meaning selfless giving, in the spirit of volunteerism).  Before breakfast, some volunteers prepare the food, while others work in the forest with digging water holding ponds, planting, mulching, and pulling out the invasive and over-competitive acacias.  After breakfast, everyone is assigned to some community maintenance activity, such as lunch cooking, gardening, compost, or recycling.  The most exciting seva is to plug the holes made by carpenter bees, which involves climbing high up in the huts!


The food served at Sadhana is almost always awesome, and never bad.  It is strictly vegan, and depending on who is in charge of cooking the recipes are more or less Indian influenced, although we frequently eat Israeli food (including great hummus) as well.  There is always plenty of fresh papaya and bananas, as well as other tropical fruits - yum! Most meals we all eat together in the community, but once a week dinner is not provided, and twice a week lunch is not either.  On these days we go into Auroville to eat and play. 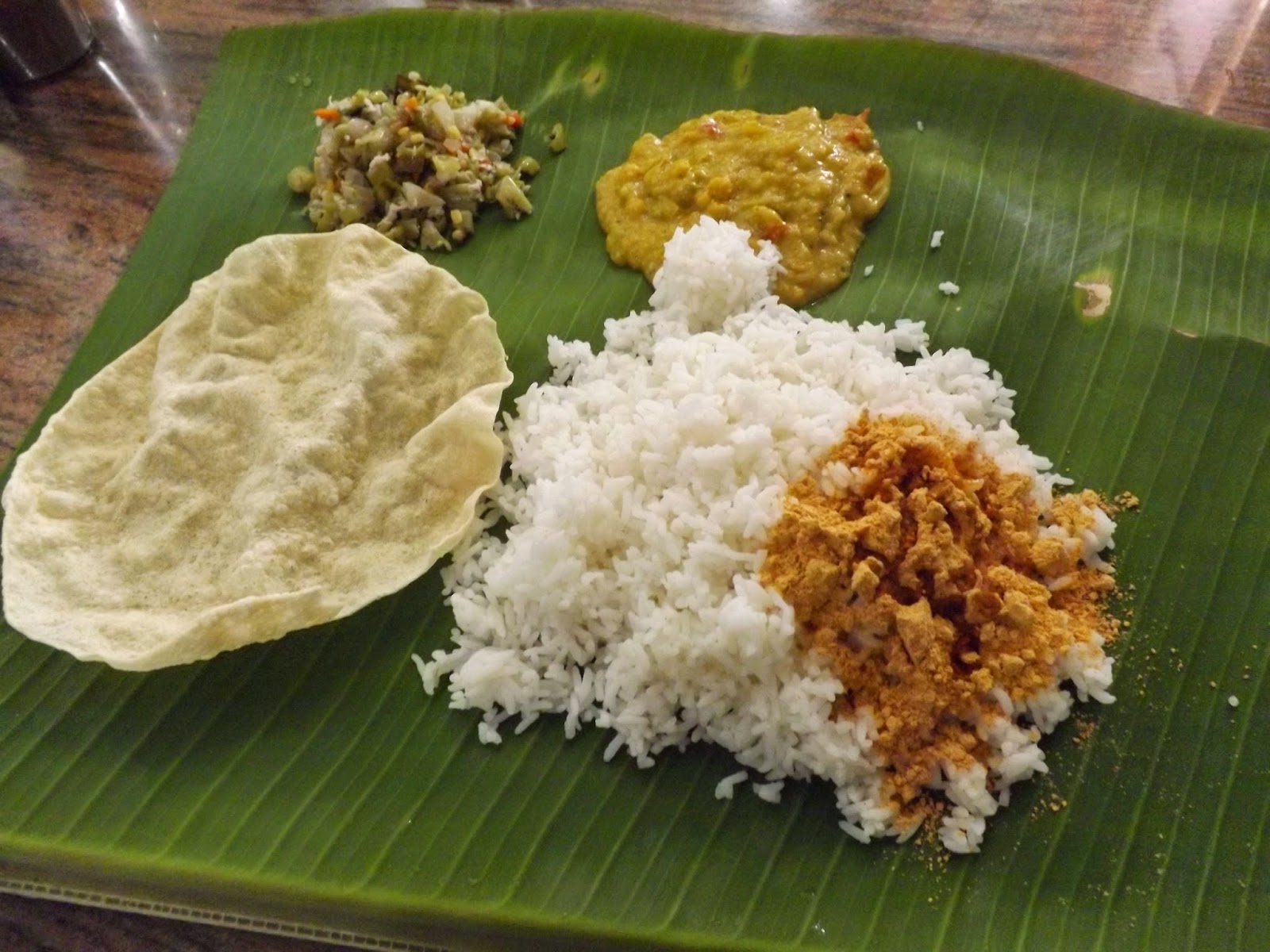 My favorite restaurant here (and maybe so far in all of India) is a place on the main road where they only serve south Indian thali.  I have had thali elsewhere but it was not as good as here.  Thali refers more to a style of cooking than to a particular recipe.  At this restaurant, you get rice and a sampling of about half a dozen different dishes. Its like an all you can eat, and they keep serving you more until you are done.  You can try all the different choices, which they serve to you on a fresh banana leaf for a plate.


Another really fun thing to eat here is fresh coconut water, in the coconut.  There are different coconuts grown here, some for the water, some for the meat.  The water type you can buy from street vendors who will cut the end off for you and give you a straw so you can drink it right out of the fruit.


Though I had only planned on staying the minimum of two weeks here, I ended up staying three weeks because there was so much to keep me busy! I could easily have stayed another month or more, but I have too much yet to see and do to stay in Auroville any longer.
Posted by Meredith Cherry on September 30, 2014