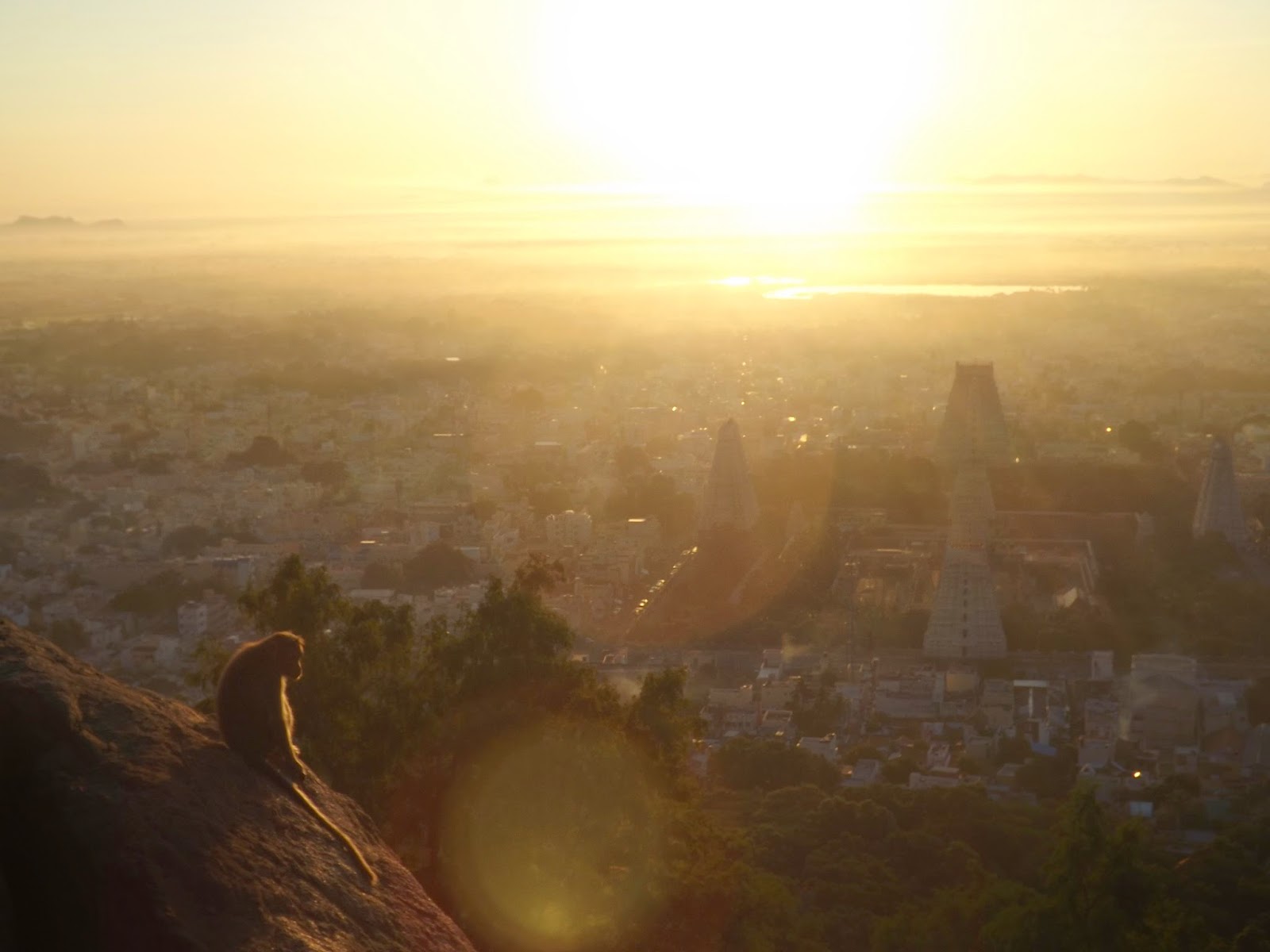 I had planned on going directly to Chennai (formerly Madras) to take a train west, but Inge, one of the other Sadhana volunteers, offered for me to come along with her to Tiruvannamalai first.  That tongue-twister of a name is more or less pronounced Tee-roo-van-ah-mah-lie. 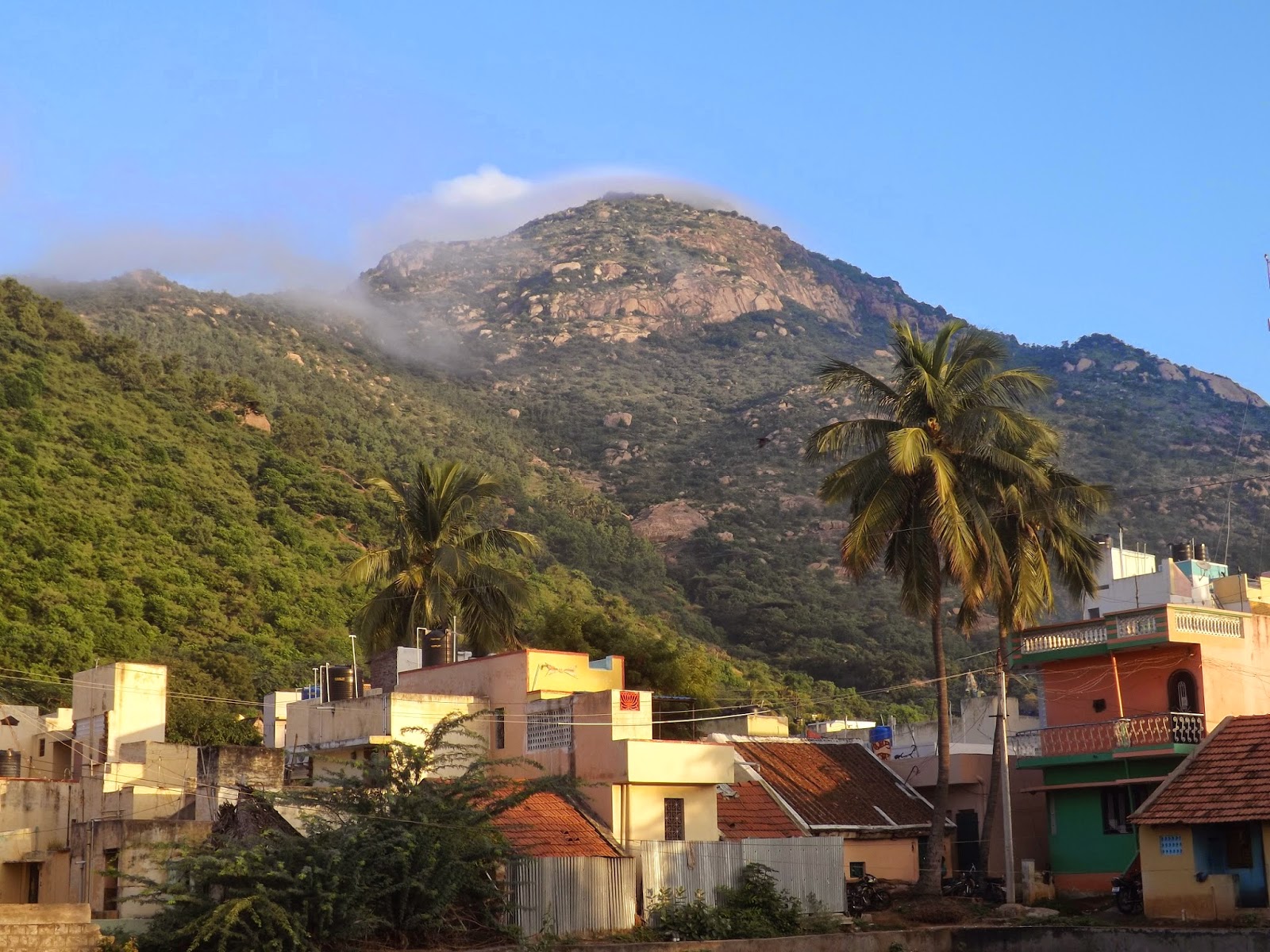 “Tiru” is a holy city for the Hindus.  It is located at the base of Mount Arunchala that is the site where the god Shiva appeared as a flaming phallus, or “lingum.” It is moderately popular with backpackers as a day trip from Chennai or Pondi, although not enough to be included in the travel guide that I carry around. 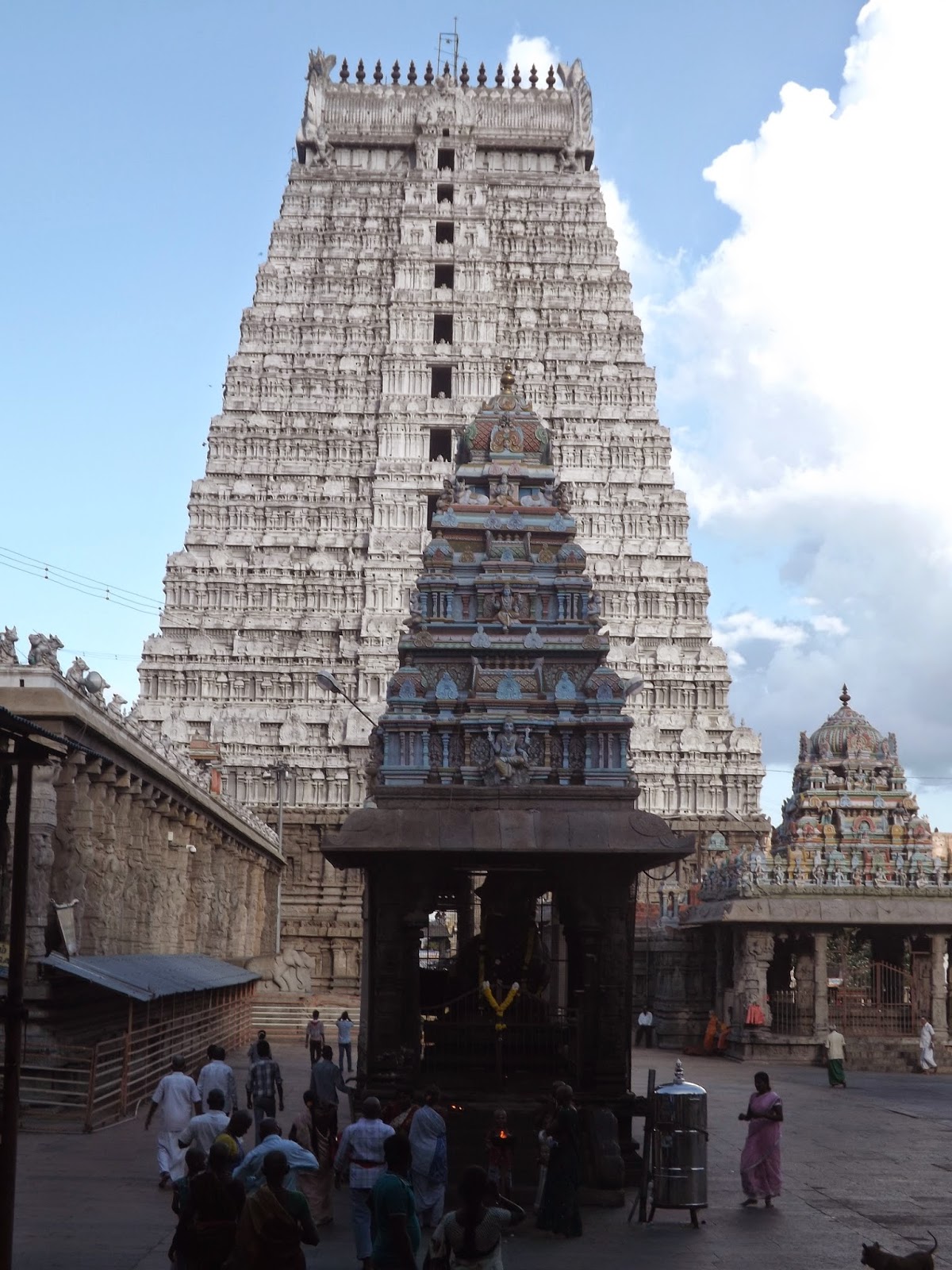 After lunching at a very westerner-friendly lunch (she had pesto pasta, I had a crepe), we spent the first afternoon visiting the old Shaivite temple at the base of the mountain.  The temple is situated between four very tall entrance gates, each of which are covered with elaborate carvings and statues of the Hindu gods.  The style of southern Indian temples is much more ornate than those of the north. 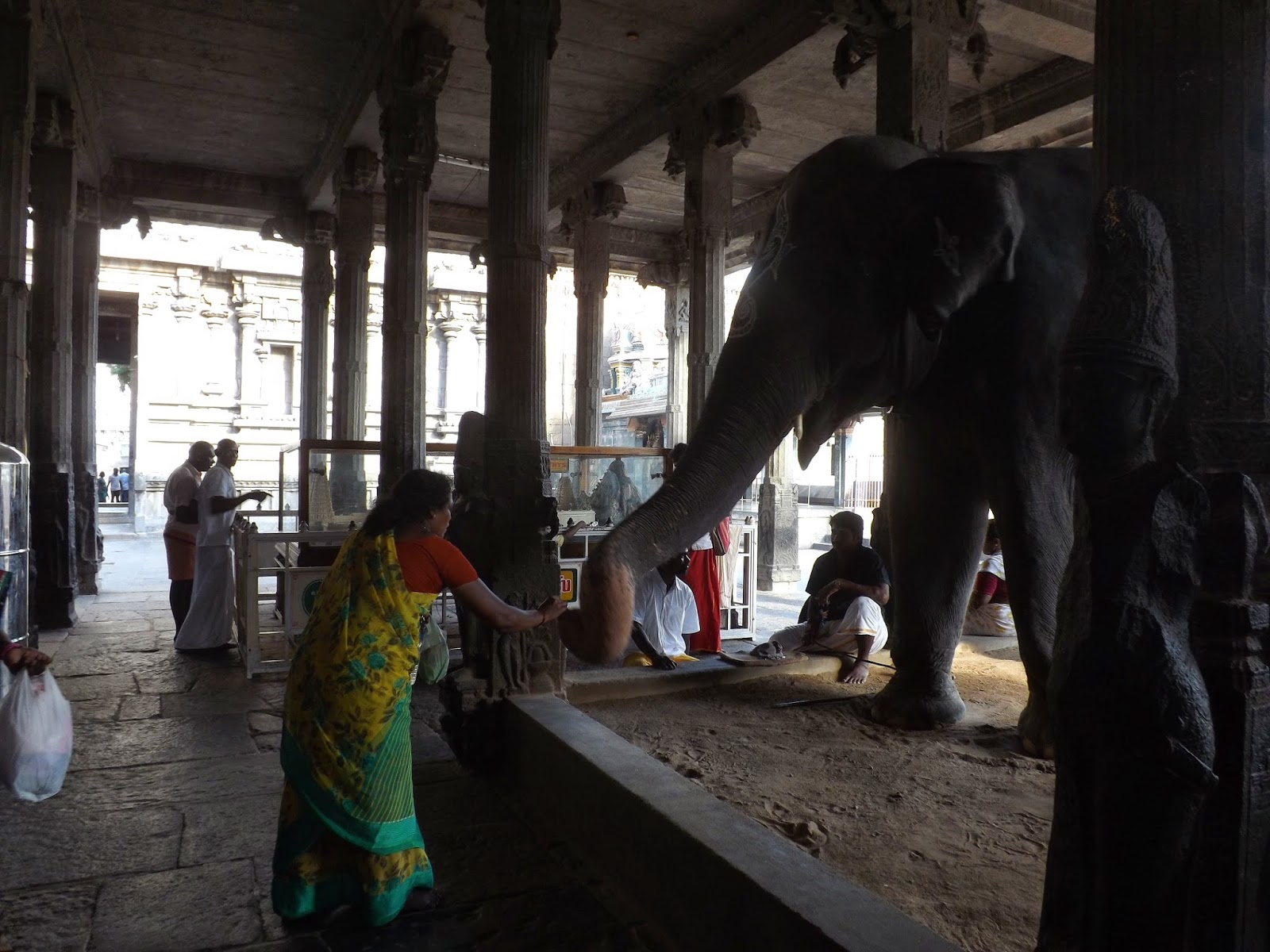 The temple is also home of a trained elephant who gives blessings to whoever gives her a rupee coin.  Just drop it inside her extended trunk and she taps your head (or sometimes ends up bumping your face).


We were allowed to go inside the main temple as well (some Hindu temples only let in the devout).  The dim lighting, dark stone work, and smoke from the many flaming alters made for a mysterious and solemn atmosphere.  Following the example of the pilgrims and of what I could remember from religious scenes of Bollywood movies, I moved along with the queue to the altar and waved the smoke over my head, and was given a pinch of powder to apply a dot to my forehead.


After the temple, we wandered through the large street market behind the complex.  Quite a few vendors had large blocks of what looked like solid jelly, which I have not seen sold anywhere else.  I bought a chunk of one of the flavors, and it tasted like a giant gummy candy.  Later I saw some in a store where it was labelled halva, but it was unlike any halva I have ever seen!


The next morning we were planning on hiking to the top of the mountain, but Inge was not feeling well so I went on my own.  However, it took me a rather long time to find the good trail up the mountain.  I did enjoy the search, which took me through the side streets of the residential area that I would not have otherwise seen.  Lots of cute little houses, of course all colorfully painted.  The women were out at dawn to clean off the street in front of their homes and re-draw the chalk art for the Dussera holiday in front of their doors.  They were all very friendly and pointed the way to the trail. 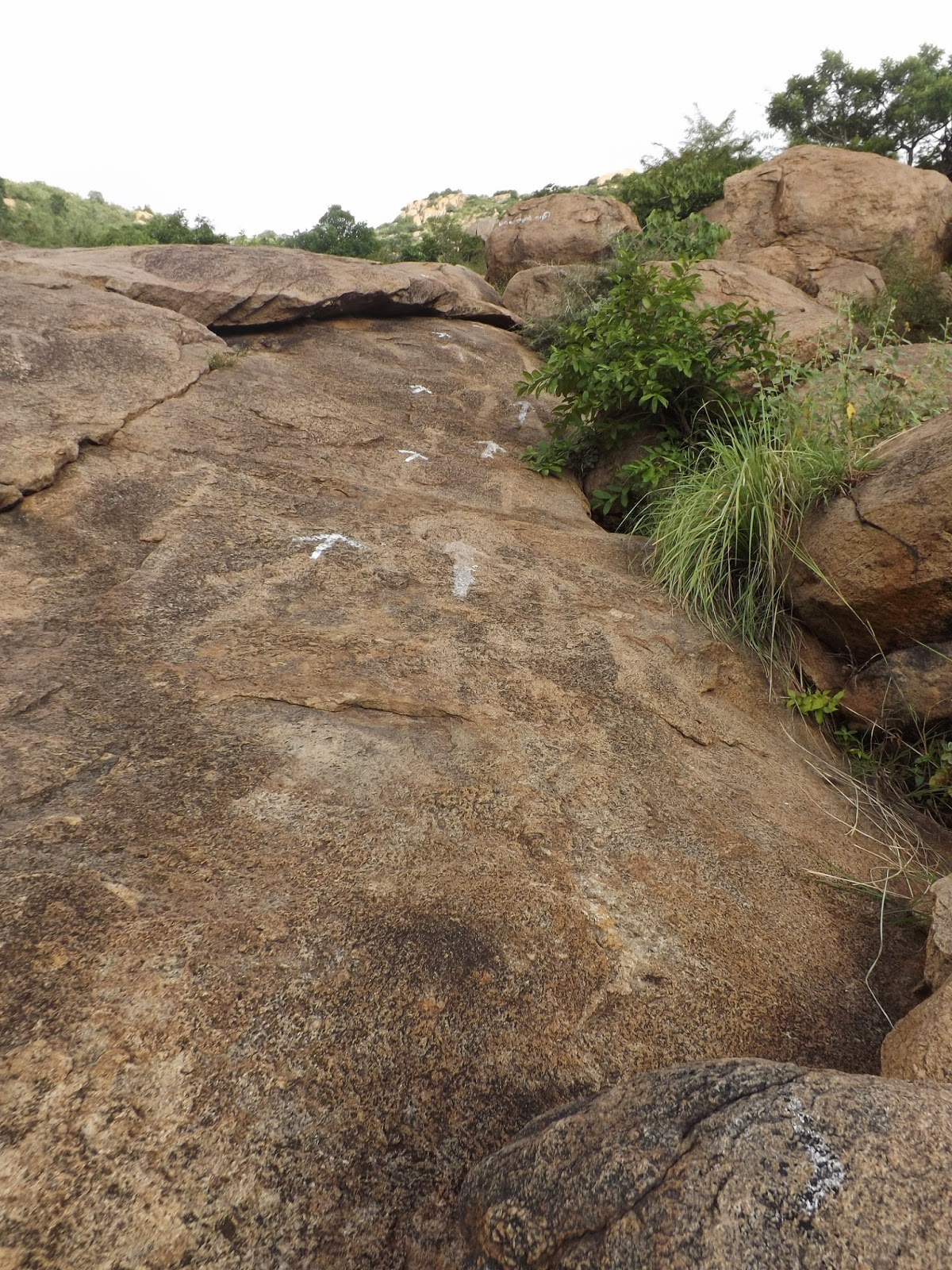 The trail at first was a continuous climb on steps roughly made from the stones that cover the mountains in this region.  However, the steps ended at a cave wherein Sri Ramana spent many years in meditation, and the path to the top became unclear.  At that point I hired a guide to show me the way, and he took me a bit further up the mountain until the path became clearly marked again with painted arrows. 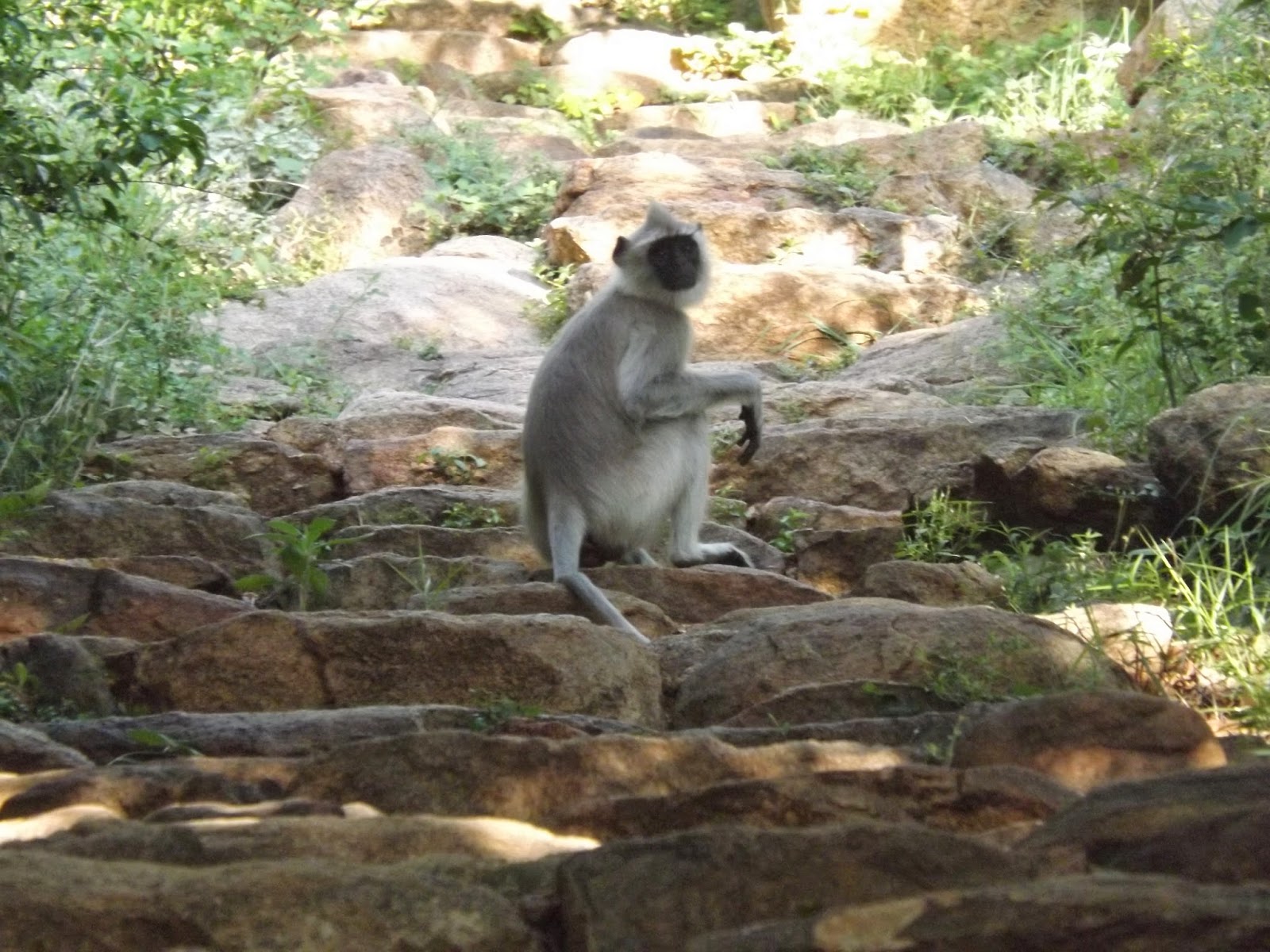 There were several large beautiful monkeys who passed me on the trail, but otherwise it felt like I was the only hiker on the mountain.  The day was quickly becoming too hot to hike, and so I found a nice shady rock to sit and enjoy the view before turning back for the day. 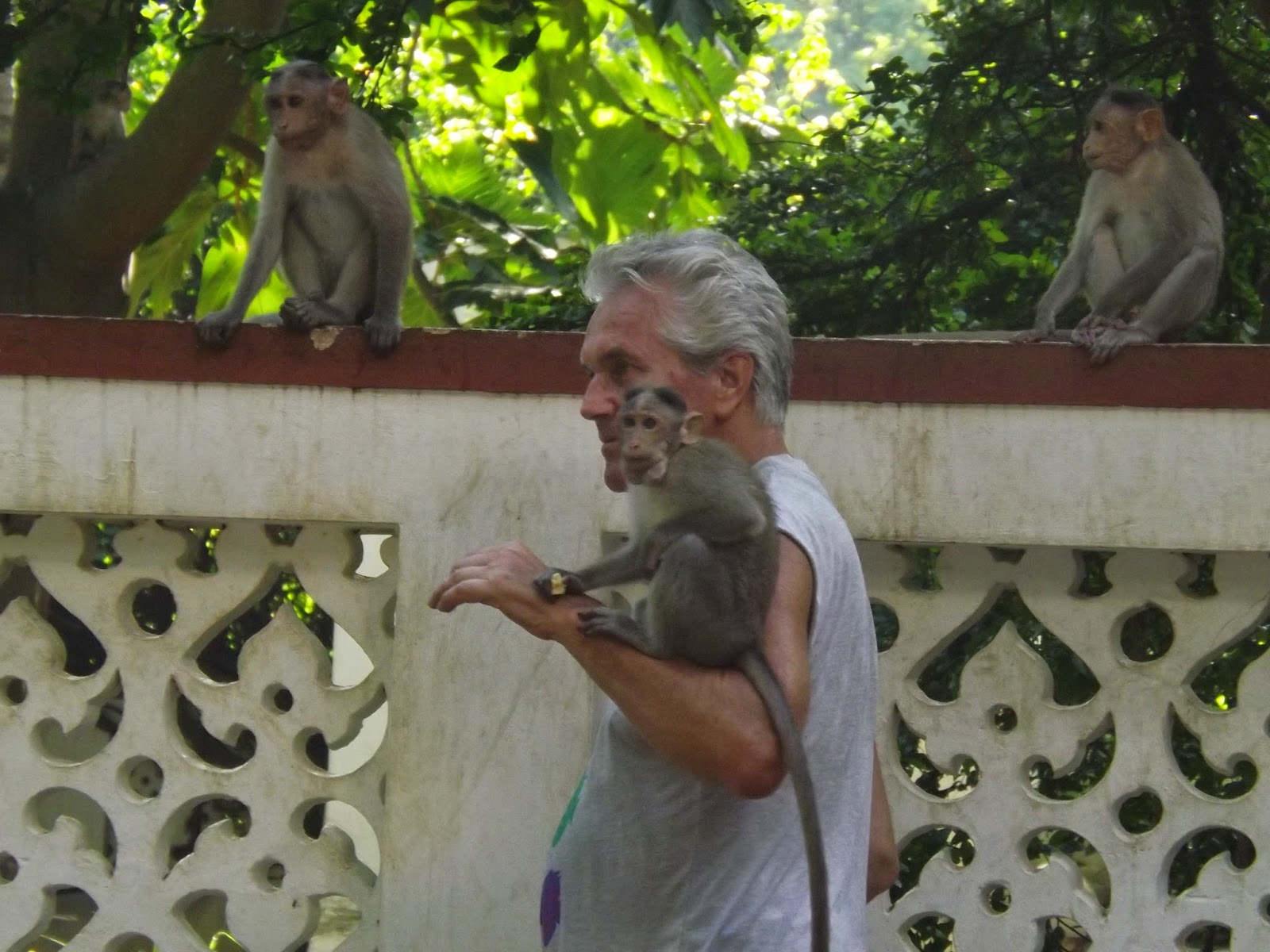 After resting at the guesthouse and lunch at another nice cafe, we went to visit the Ramana Ashram (named for Sri Ramana of mountain-cave dwelling fame).  The Ashram is home to many monkeys, who were accustomed to being hand fed treats, as well as some lovely peacocks.  They had a day long schedule of worship and meditation that guests could participate in, but we were not inclined to do so.  We were surprised to run into Blaise, who had been at Sadhana a few weeks before, and it was nice to chat with him for a bit. 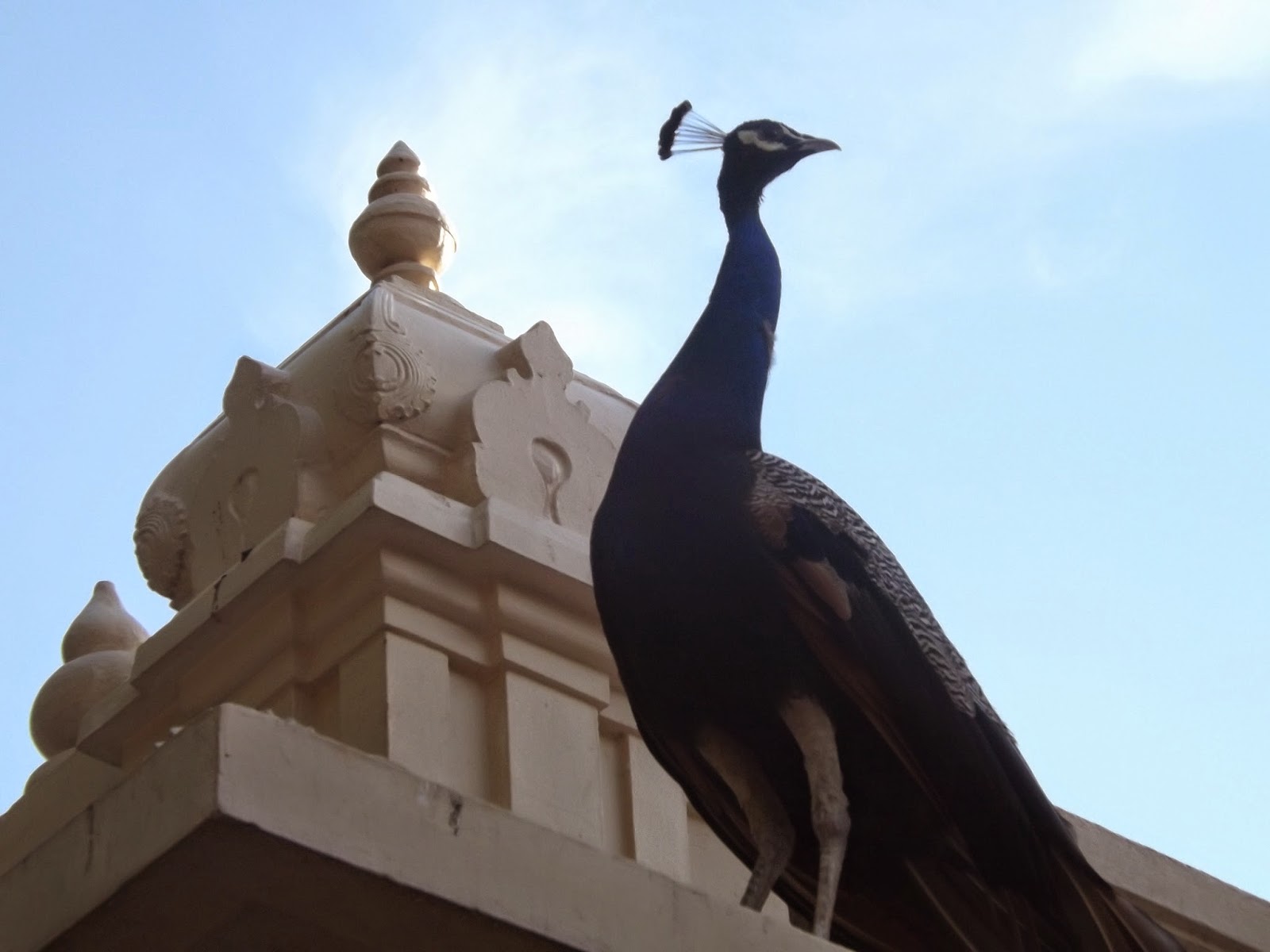 I ended my long, tiring day with a wonderful yoga session on a rooftop shaded by coconut palms, where the yoga instructors skillfully led me to stretch and bend in ways I did not think were possible for me!


The next morning we attempted to hike to the top of the mountain again.  Blaise had suggested a different route up that was less steep up to Sri Ramana’s cave, and so we gave that path a try.  We started out just as the sky was beginning to pale so we could hike in the coolest hours of the day and watch the sunrise from the mountain. 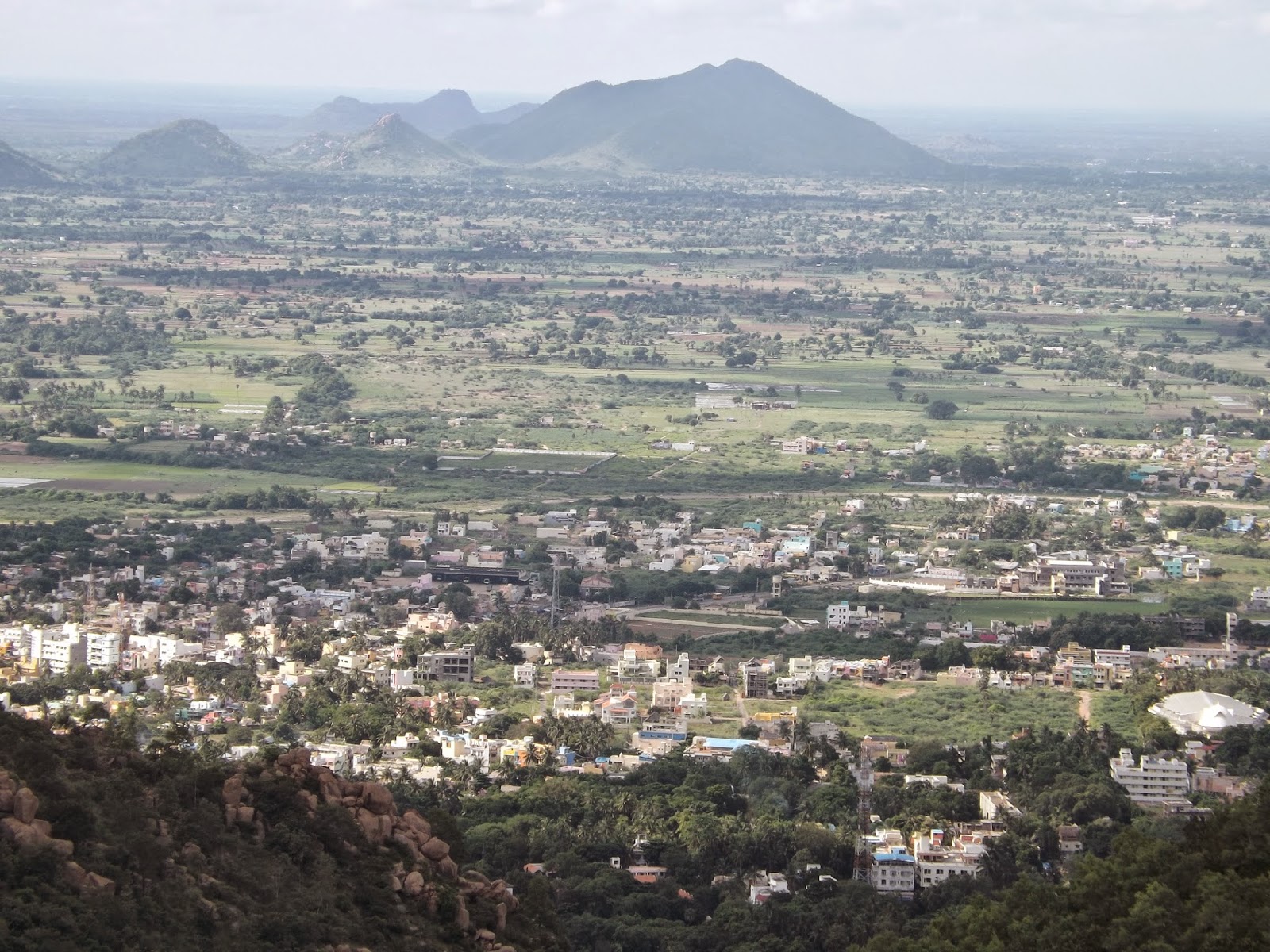 The path joined up with the one I took the previous day at Sri Raman’s cave, and this is where it got challenging.  From the cave to the top was mostly a steep route over boulder fields.  I was glad I had been shown the way already, so we could get further before the heat became intolerable.  The mountain turned out to be bigger and our progress slower than anticipated, and so once we had climbed up to some very nice views we decided to head back down so we could catch a bus in time.
Posted by Meredith Cherry on October 06, 2014