Sadly, it was time to move on from Bodhgaya.  I had arranged to volunteer at a forest restoration project in the southern part of India, and it would be a three day journey to get there.


Train travel is the primary mode of transportation in India for anywhere too far away for a tuktuk.  It is estimated that the number of people who travel each day by train in India is equal to the population of Australia…. Imagine that!


Buying a ticket can be an exercise in patience.  Sometimes it is very easy – in Varanasi, I just walked up to the foreign ticket counter, told them what I wanted, and got a ticket right away.  Sometimes it is less easy, like in Bodhgaya.  To get from Bodhgaya to Pondicherry (or Puducherry) I had to take two trains, the first to Calcutta (Kolkata), and the second to Pondi (as the tourists call it).  The first ticket was easy to buy, but the ticket agent would not sell me two tickets in one day.  So, I came back the next day.  The same agent (there is only one agent in Bodhgaya) said he couldn’t sell me a ticket until Saturday, which was in two days, at 8am.  So on Saturday I returned at 8am.  He then said he couldn’t sell me one until 9:30am.  So I came back then.  Then he said to wait until 10am, and he would sell me a ticket.  So I waited around for half an hour, and at 10 on the dot he called me to his window and sold me a ticket.


Having bought my tickets, I was set to go.  My first train was set to leave at 9:30pm from Gaya, so I took a tuktuk to the station, only to find out when I got there that it was delayed for three hours.  I found a seat by the correct platform (never an easy task), and settled in with my book.  At every previous train station, the announcements for trains are in Hindi and English.  However, at this train station they were only in Hindi, but luckily I was sitting next to a businessman who spoke good English and was happy to keep me posted with translations.  Good thing, too, because the train was delayed again, and again, and again, and again.  It finally arrived 5 hours late, and I was back on my way (and on the correct train – always a happy achievement!).


The train had no further delays, so we arrived in Kolkata five hours late as well, at noon.  My train south was not set to leave for Pondi until 11:30pm, so I had all afternoon to spend in Kolkata.  My biggest challenge for this time was my bag.  I only carry a backpack and a shoulder bag, but I did not want to haul around my big backpack while sightseeing.  I decided to risk the “cloak room” at the train station for storing my backpack, and it worked great. 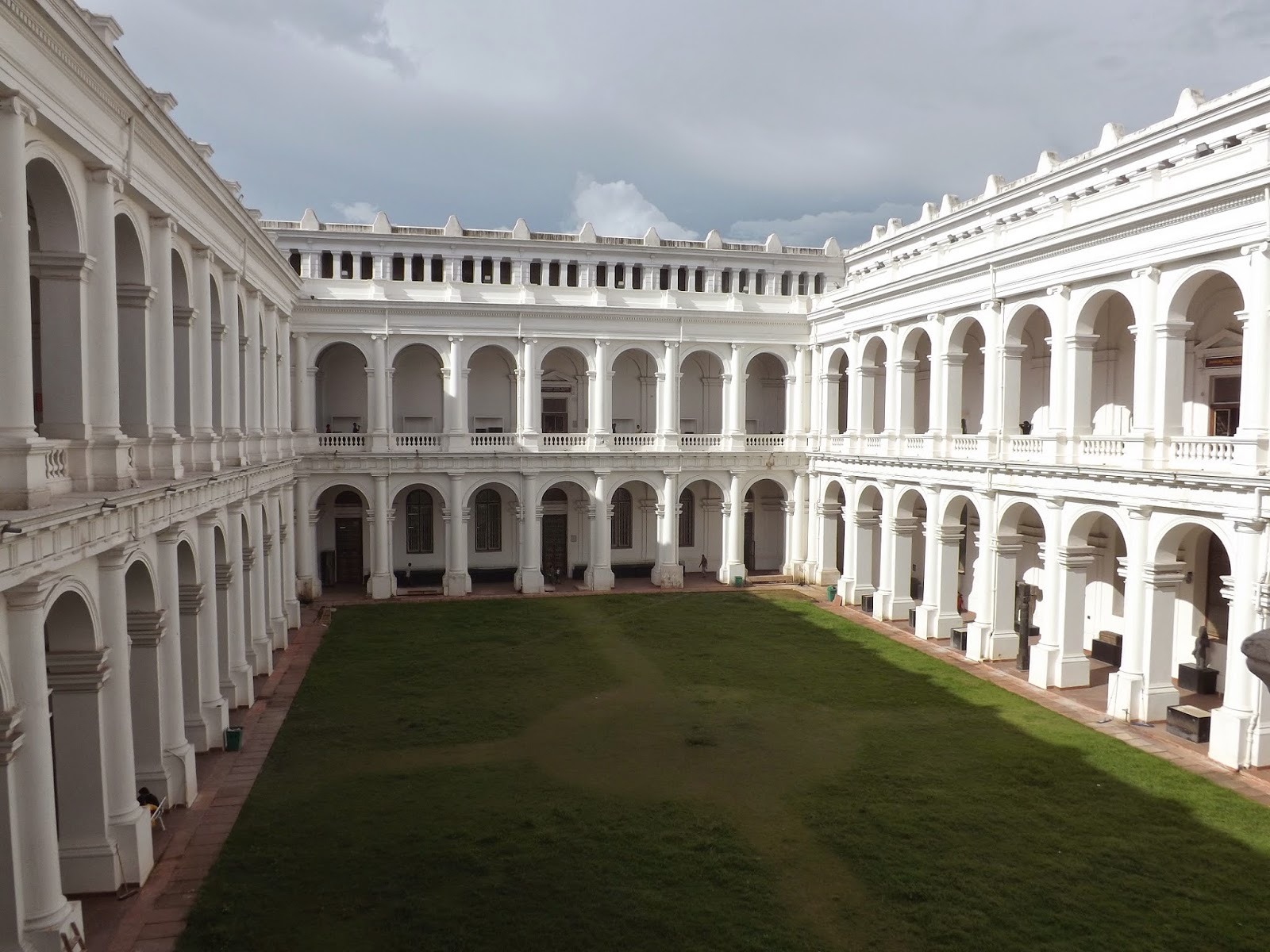 The city of Kolkata was during the British colonial era a major center for the East India Trading Company, so much of the city is British architecture in deteriorating condition. Even the taxis are old British model cars.  I can’t say that it was nicer looking or not compared to other Indian cities, but it was different! I especially liked the hodgepodge buildings, where you could clearly see where the post-colonial residents added onto the British buildings without attempting to match the style of the façade. 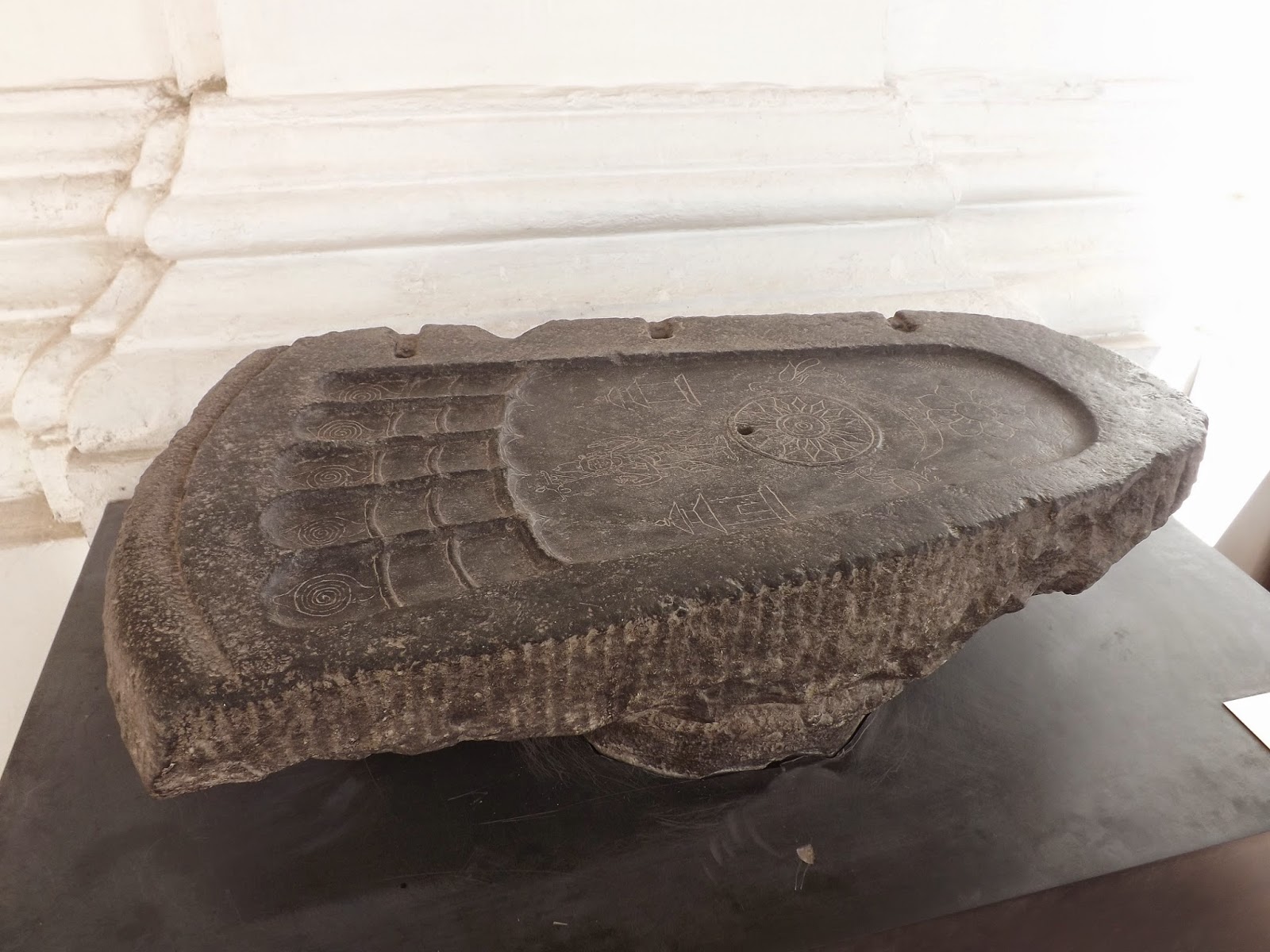 The only thing I was really interested in visiting here was the Indian Museum. I had been reading “The Wonder that was India” which is an excellent overview of Indian history and culture from prehistoric times until about 1300 A.D.  A lot of the photo of art in the book were from the Indian Museum, so I was interested in seeing what I had been learning about.  The museum certainly lived up to my expectation in this aspect, as it had lots of great exhibits of ancient Indian artwork, coins, and architecture. 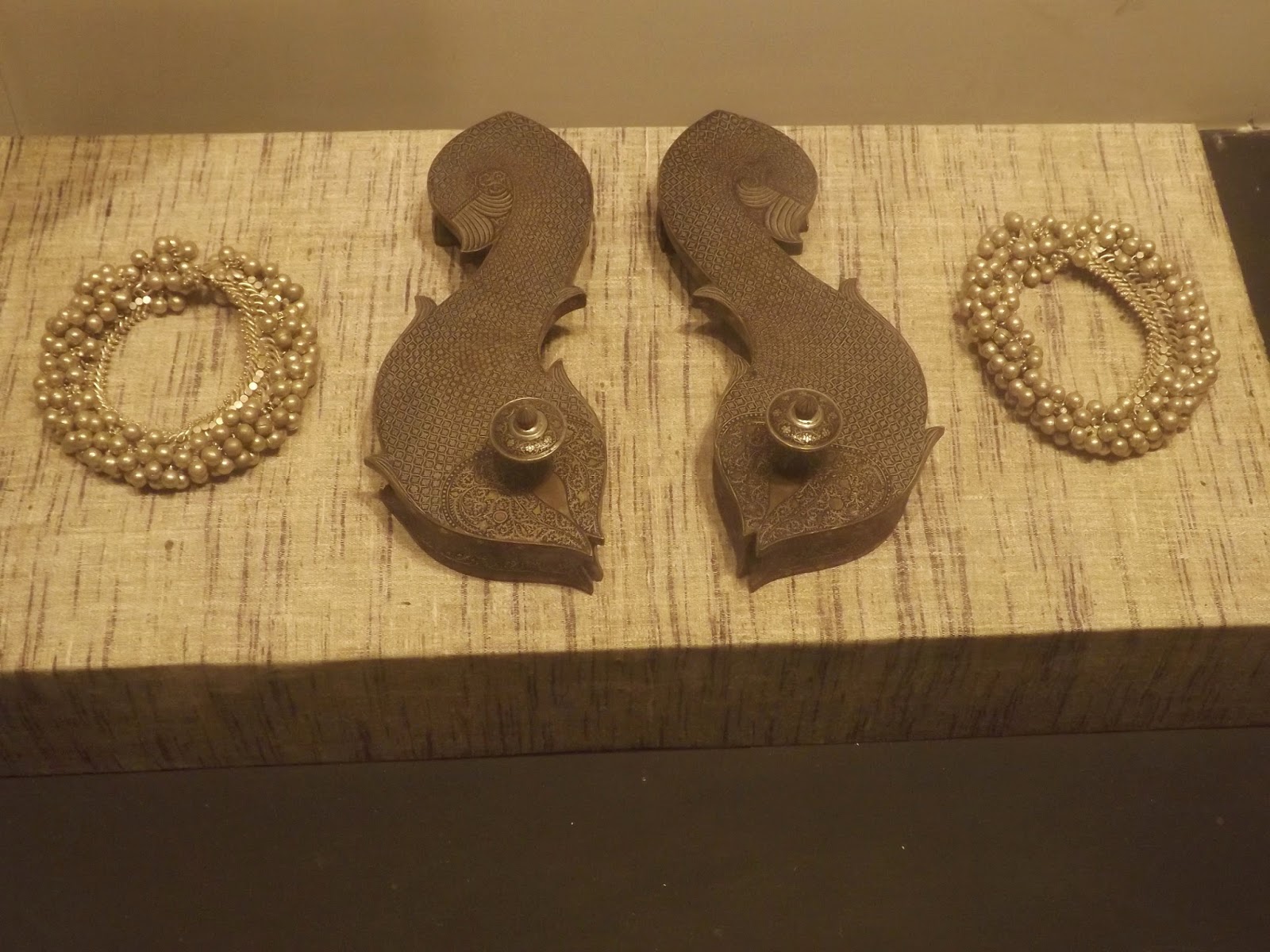 The museum had a wonderful collection of fabrics and “household art” (pottery, combs, jewelry, shoes, and other decorative but useful items).  Finding the exhibit was a challenge, as the entrance was practically hidden, but I am glad I found it! Some of the most beautiful objects in the museum were in this collection.  I love the funky fish sandals and pearl ankle bracelets pictured above! 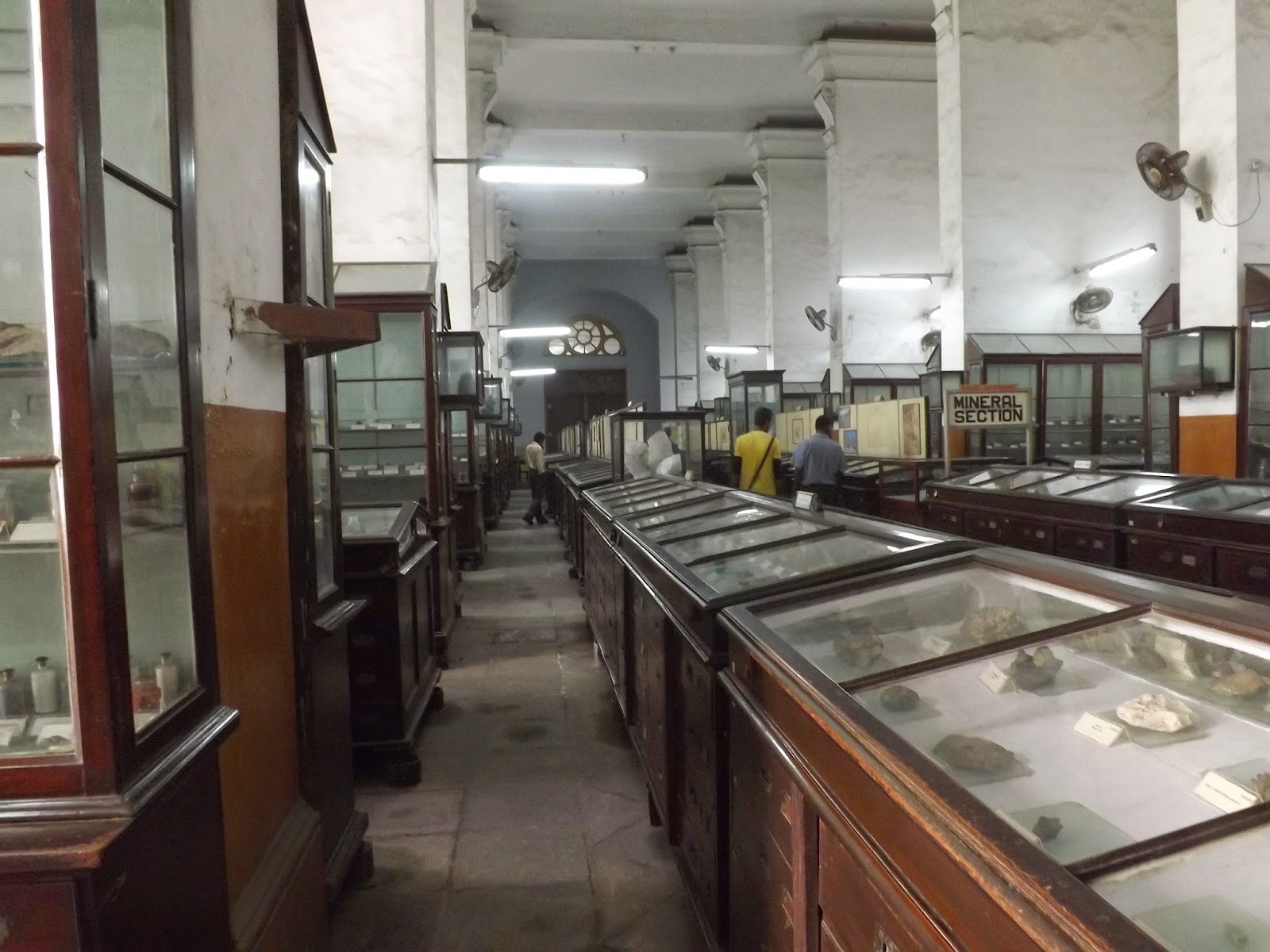 Also interesting was the museum’s natural history exhibits. Though not particularly interesting themselves, they were fascinating to compare to similar museum exhibits in the U.S.  While the contents of the exhibits were practically the same (such as taxidermy animals, fossils, and lots of rocks), the method of presenting them was entirely different.  Indian museums feel dusty and old, with very few interpretive signs.  The mineral room was just shelf after dusty shelf of rocks which, while labelled with scientific name and origin, did nothing to educate the non-geologist visitor.
Some of the exhibits, especially in the human evolution room, reminded me of science fair projects.


My guidebook also recommended that I should try the Bengali sweets that the area is famous for.  Luckily, one of the best sweets shops in the city also has a small store in the train station, so while I was waiting for my train I went there and ordered one of each of quite a few different things, so I could sample while I sat on the train.  Bengali sweets are extremely sugary, from being soaked in sugar syrup.  Some were made with nuts, some with bean curd, others I don’t know the main ingredient, but almost all were similar in their syrup-soaked preparation.  They were delicious, but I was slightly disappointed by the lack of complex flavors that Indian food typically contains.


Back on the train, and boy was it crowded this time! Every seat was filled, and almost all of them were travelling to the same city.  I spent one night and one day sharing a pair of benches with four to five Indians who were traveling together. One of the men spoke some English, so they spent quite a bit of time talking to me through him.  For the n-th time since I arrived in India, I was asked if I eat rice (alternately I have been  asked if I eat only bread), and I finally figured out why I was being asked that.  Apparently Westerners have a reputation for eating bread instead of rice for their grains, to the point that Indians think that Westerners either cannot or will not eat rice at all! I assured this family that Americans eat both rice and bread, and they were very surprised.


I spend a lot of my train travel looking out the window.  Overall it seems that most of the country has pretty similar landscape.  Especially rice paddies: I did not realize how much of the country grew rice, and sometimes it seems like the country is one big paddy, with towns plopped in the middle.


I could tell on this trip that we were getting further south by the changing languages on the signs of ads and at train stations.  At first, everything was written in Hindi (sometimes with Arabic), and as we went south, Tamil was added to the mix.  The Tamil became more common and the Hindi and Arabic less so, and by the time we reached Pondi almost all signs were in Tamil.  Also, the food from the vendors changed from samosas to dosas.


My guidebook and fellow foreign travelers frequently talk about trying the street vendor food, and where the best places and foods to eat are at.  None of them ever mention train vendors, but I am very impressed by the vast selections of freshly cooked and delicious foods that you can buy from vendors who wander through the train.  You can also get cold drinks, “aloo chips” (aloo is potato), and other snacks.  I am sure it is not the best quality food in India, but for my tastes (and budget!) it is excellent.
Posted by Meredith Cherry on September 18, 2014