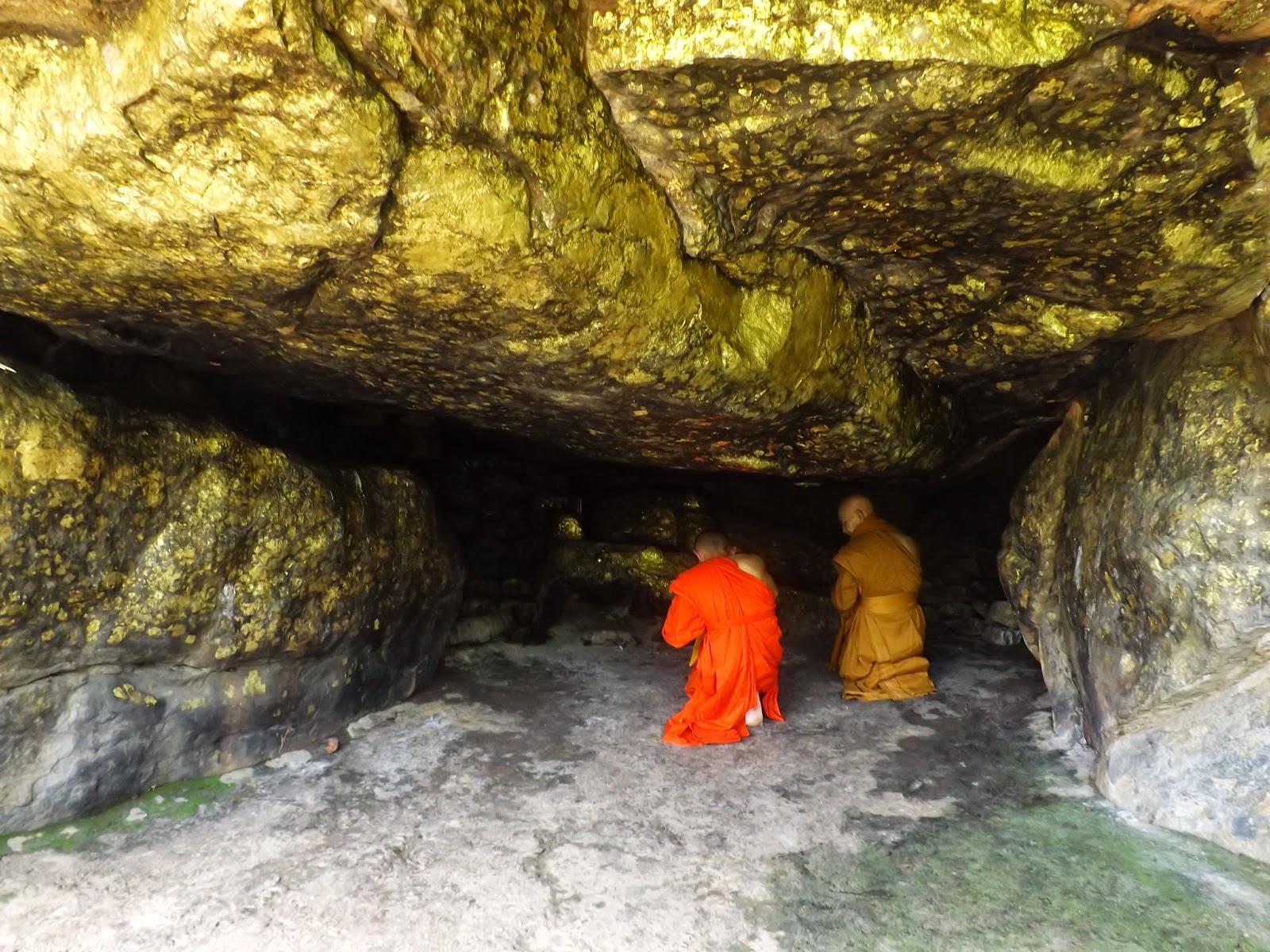 All during my stay at Wat Lao, the monks and monastery manager had been recommending that I visit the historical Buddhist sites north of Bodhgaya.  I had been planning instead to stay at a meditation retreat for the rest of my time there, but when it was cancelled at the last moment I suddenly had plenty of time for sightseeing. 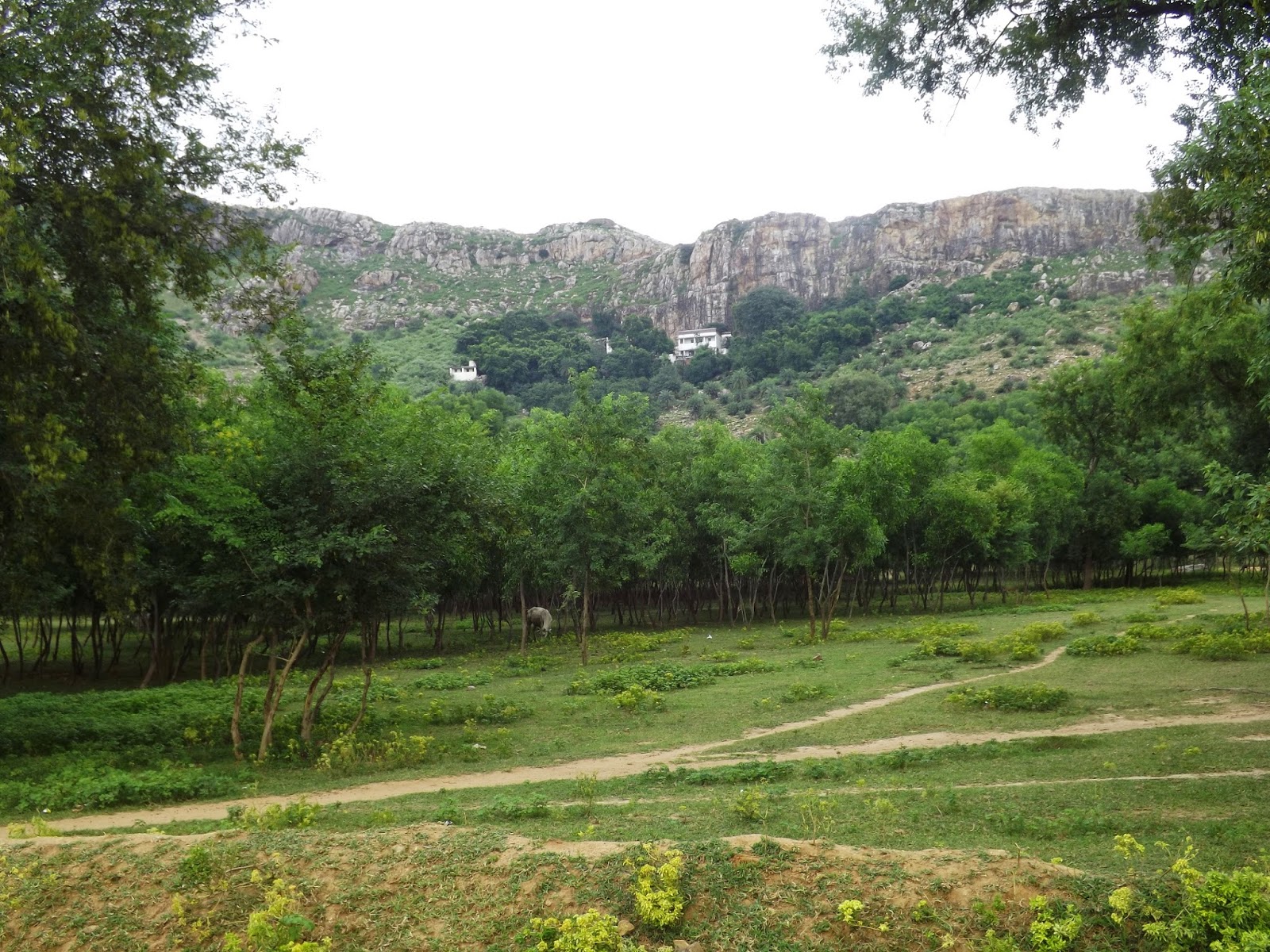 For my first short sightseeing trip, I went to the Prakh Bodhi Cave (which has several other names and spellings, even on the road signs along the way).  This is the cave in which Gautama spent many years in retreat as he strove for enlightenment, attempting the methods of the ascetics.  Once he realized that this was not the way to enlightenment, he emerged from the cave and made his way to the Bodhi Tree where he vowed not to leave until he became Buddha. 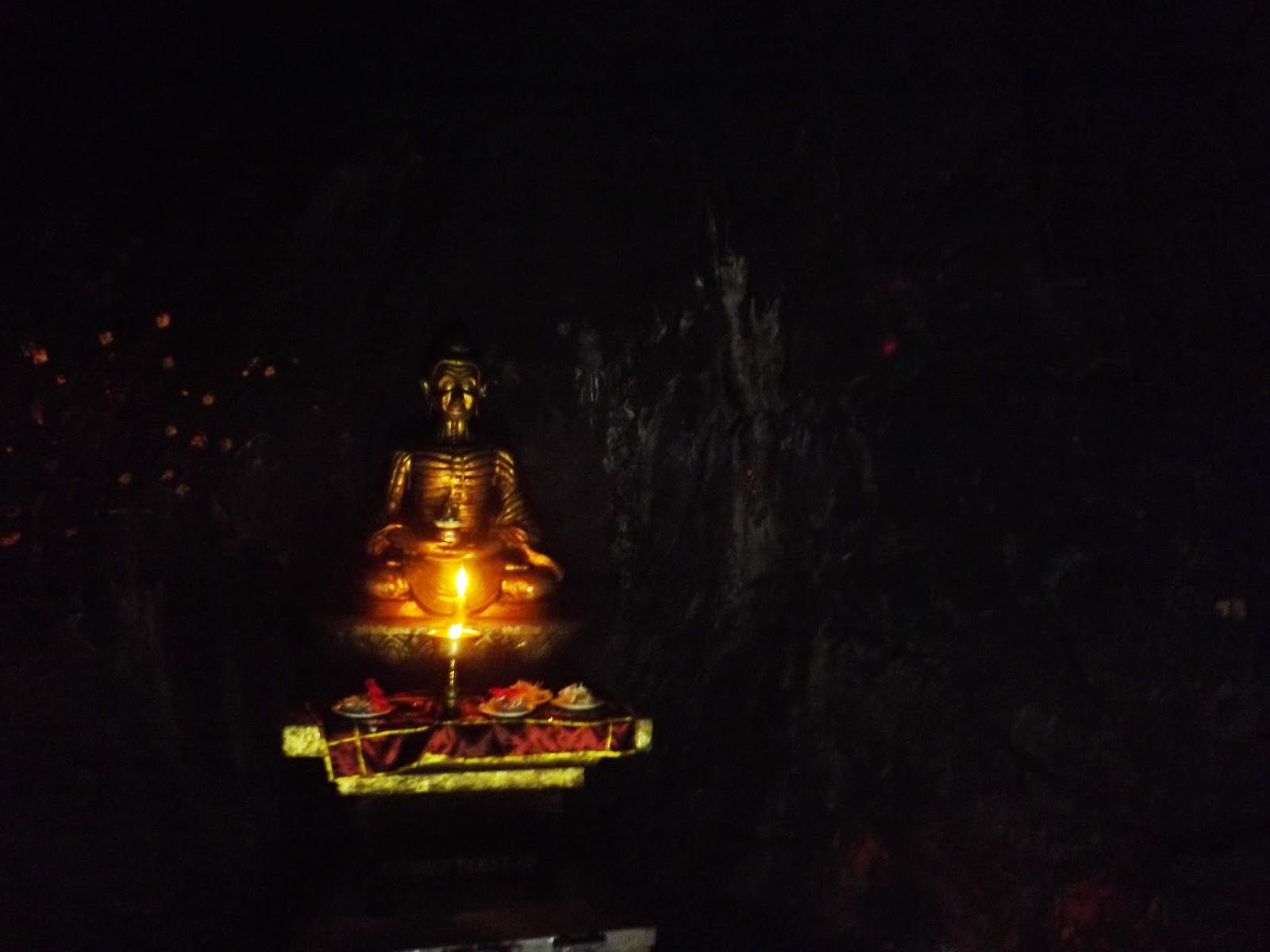 The cave was not that interesting, honestly. It’s a tiny hole in the side of a mountain which rises out of the flat plains about 10 miles from Bodhgaya. The cave is only just big enough to stand up in, and perhaps 10 feet across.  Inside the cave is a small shrine with a statue of the Buddha in emaciated condition as he was while he sat in his cave.  The walls are covered in the gold foil that pilgrims have stuck there.


The most exciting part of the journey was the motorbike ride.  The monastery manager, Sanjay, drove me there on his scooter.  I have never ridden a motorcycle of any kind before, and it was rather terrifying at first until I felt like I could balance like I was riding a crazy horse.  It was also interesting to be so far off the normal tourist path. There were no other tourists there, foreign or Indian, so it was definitely a more “real” part of India.


The next day was much more interesting.   I hired a car to take myself and two of the monks to see Rajgir and Nalanda.  Sightseeing with the monks was wonderful, because they could explain to me the significance of each place.  Also, at each place they took a few minutes to chant and light candles and incense on the altars, which really made it a much more complete experience than just visiting as a tourist. 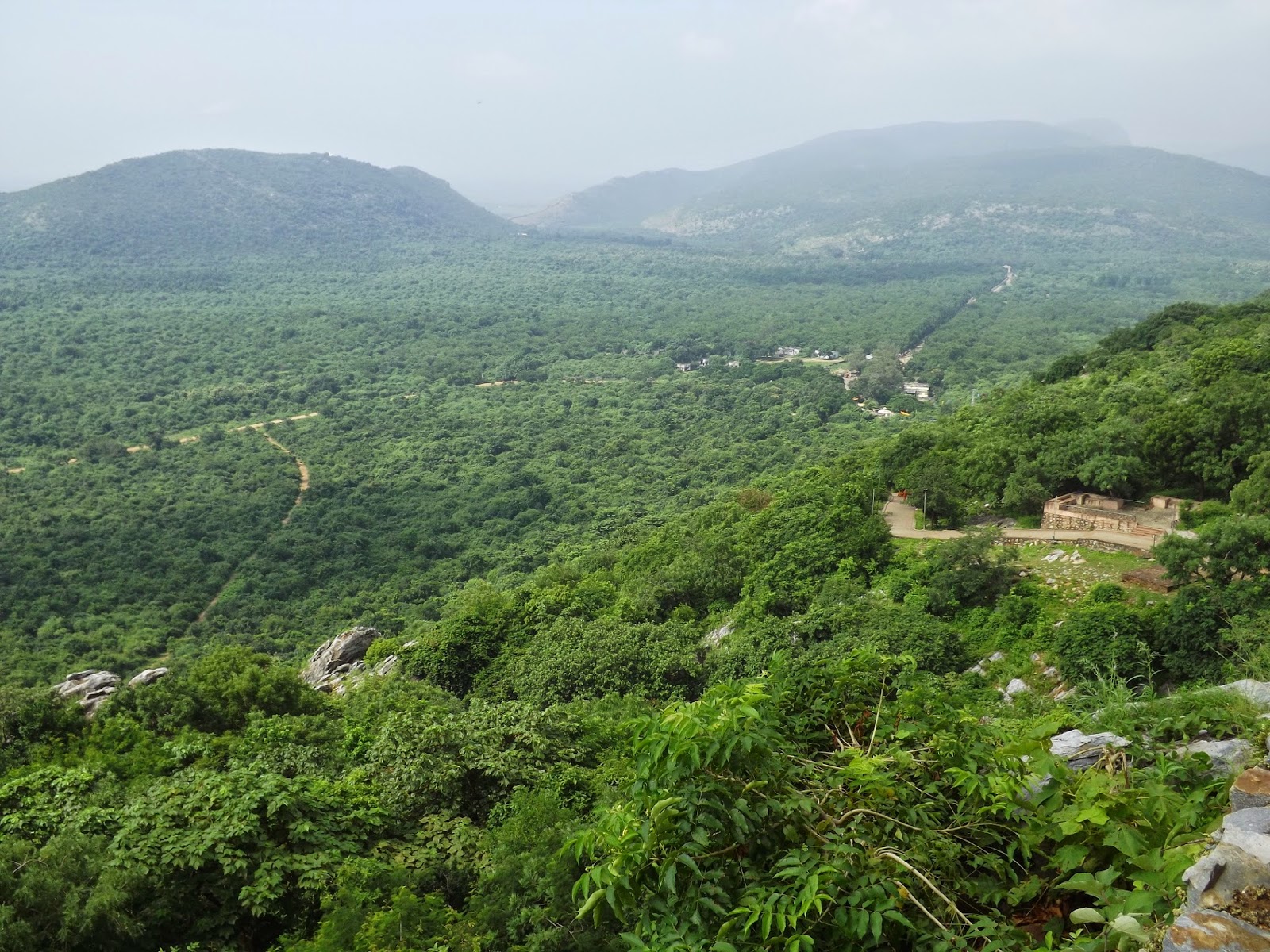 We started off at sunrise, so that we could visit as much as possible before the hottest part of the day.  The first stop of Rajgir was over two hours away, and it was a good plan to leave as early as we did.  Despite our early start, it was still so hot by the time we got there that I was running with sweat by the time we walked from the parking lot to the summit of the hill where the main attraction was. 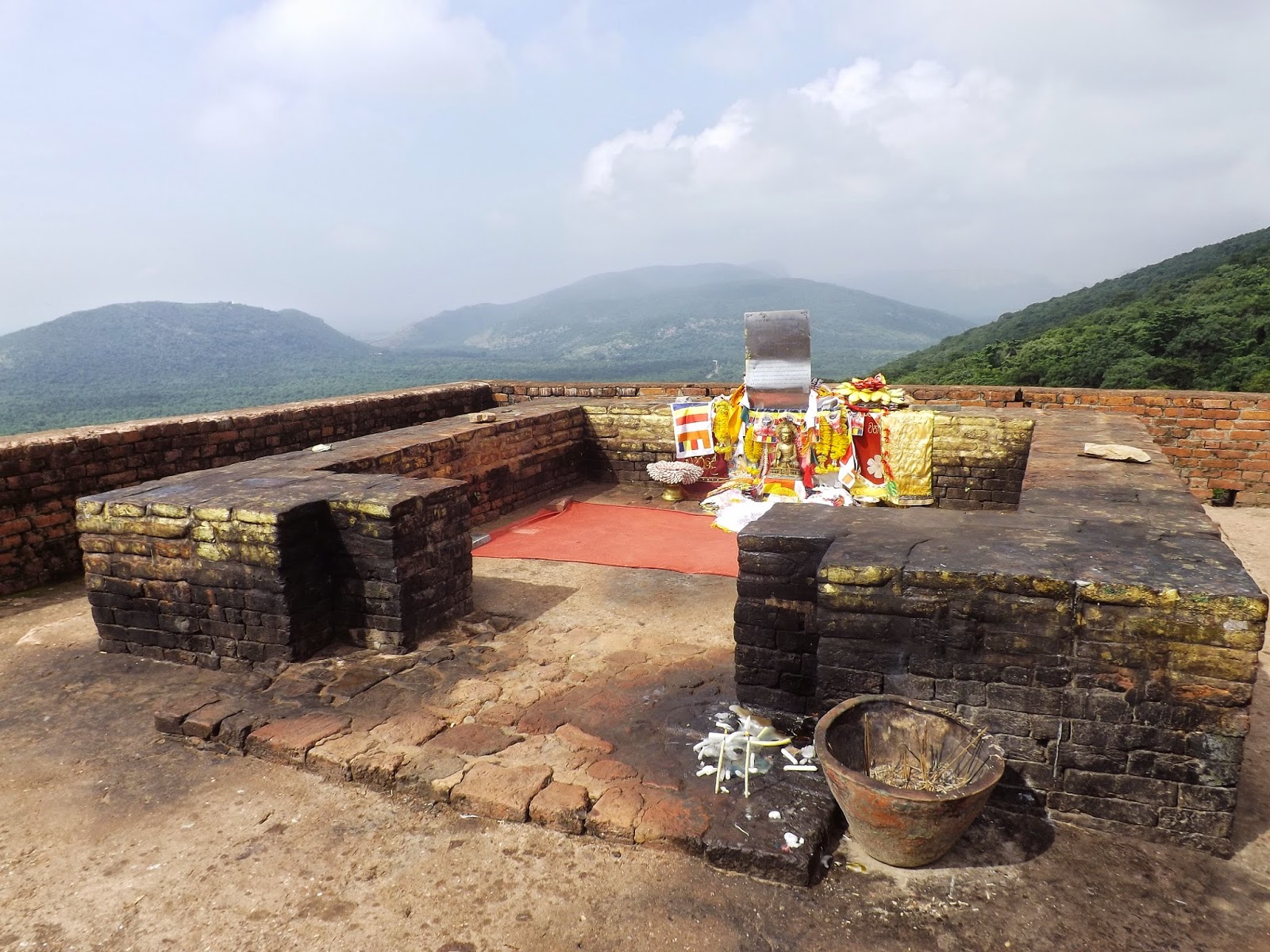 Rajgir was the capital of one of the ancient kingdoms of India; however the reason we were visiting was because it was a primary rainy season retreat for the Buddha and his sangha.  On the way up the mountain there were several caves where the arahant (enlightened through the Buddha’s teachings) monks lived and essentially kept guard for the Buddha.  At the top of the mountain was the “house of the Buddha.”  Nearby, according to the sign, was also a "mango groove" donated to the monks.  Groovy indeed! 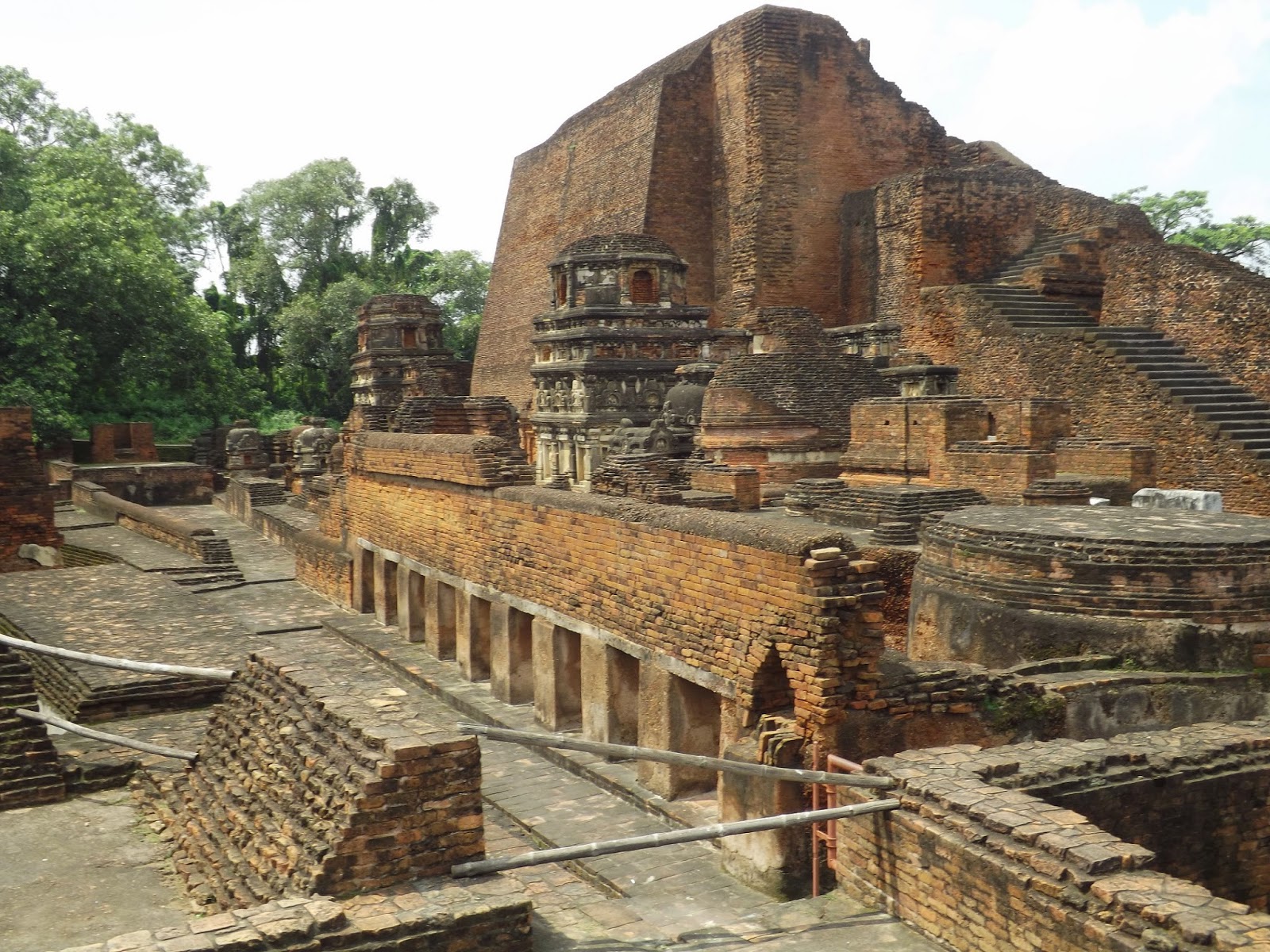 After a short ride in the wonderfully air conditioned car we arrived at Nalanda.  This was not an important location during the life of the Buddha, but it was very important in the following several centuries as the site of the first university for monks.  Quite a bit of the site still remains, and it is very large! It housed thousands of monks in its heyday.  The most beautiful part was the old temple, which is covered in small stupas and artwork. 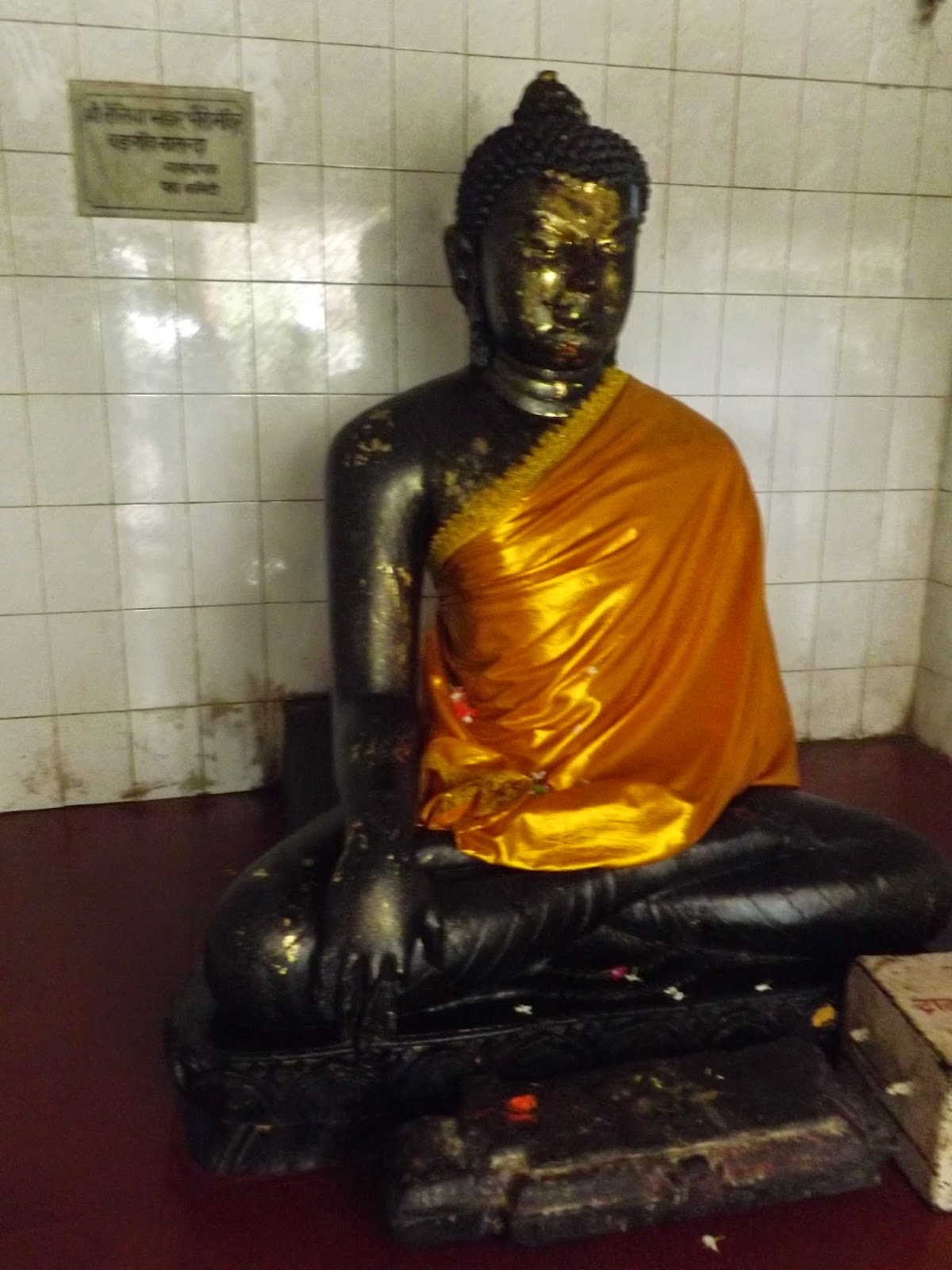 Apart from the well known ruins, there are several other things to see in Nalanda.  Again I was glad the monks came with me, because otherwise I would not have known to stop at these places. We went to see the Black Buddha, something I would not have decided on visiting if I had been traveling by myself.  This is a statue of the Buddha carved out of black rock, with some customary gold foil stuck on it, and then covered in oil.  The monks told me that the legend is that a very sick girl prayed to the Buddha there and applied the oil from the statue to her body and then she was miraculously healed.  The priest attending the statue smeared oil on me before I could stop him, and my monks smiled and said it was auspicious, and applied oil to themselves as well.  I don’t think it worked as a preventative remedy, though, because I was fine when I went there but came down with a head cold two days later.


We went to see a Hindu religious site nearby where a hot spring had been developed into a warm bathing spot, and a temple to Shiva was also located.  I seriously needed a bath after being coated in holy gold foil flecked oil, but refrained from taking a dip. 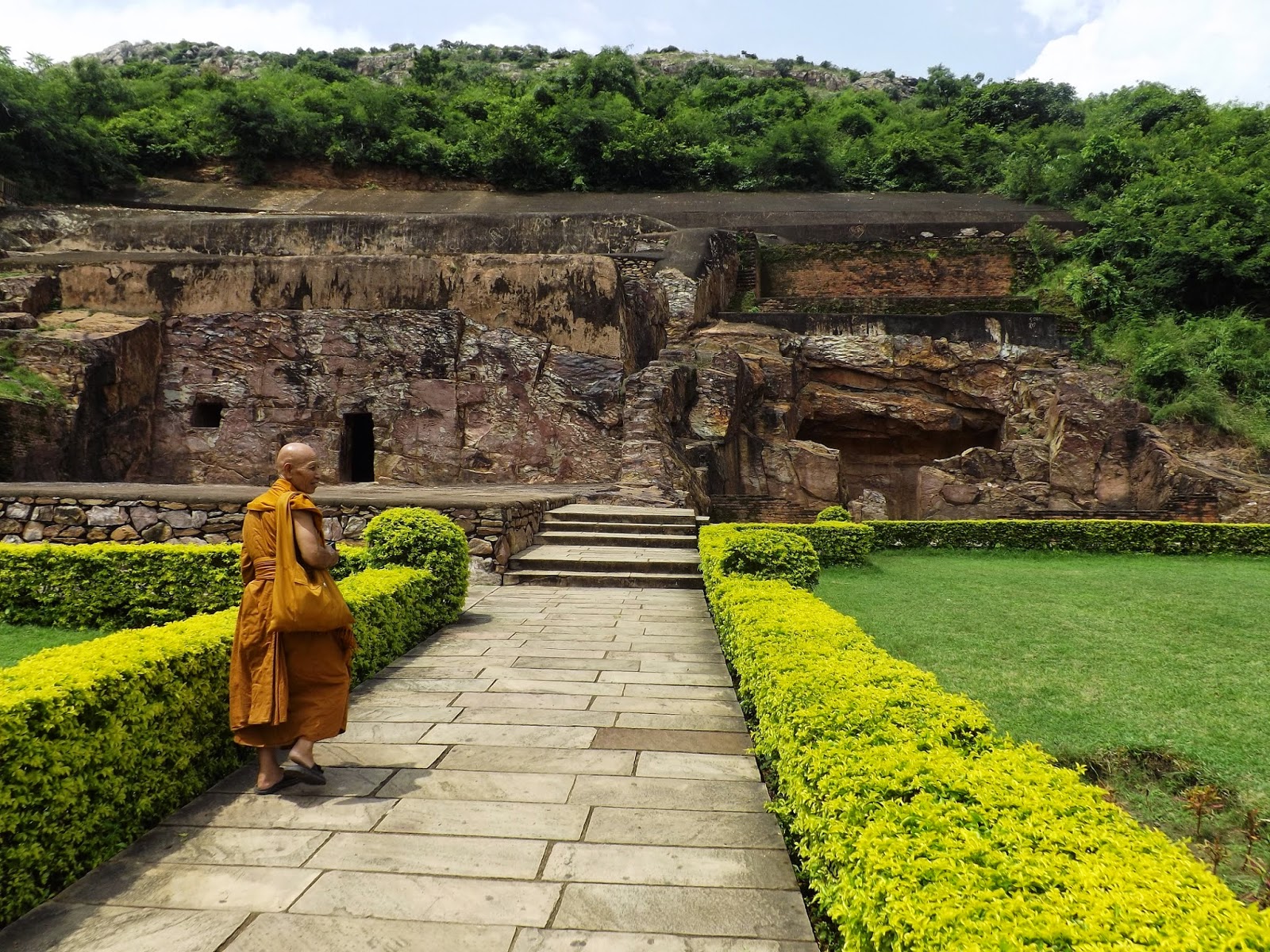 The monks also asked the driver to stop at Sone Bhandar, which was a historic site so tiny that it didn’t even have a guard or fee.  It was two rooms cut into a cliff face that was built to be the king’s treasury, but was then converted to a meditation space for the Buddhists. 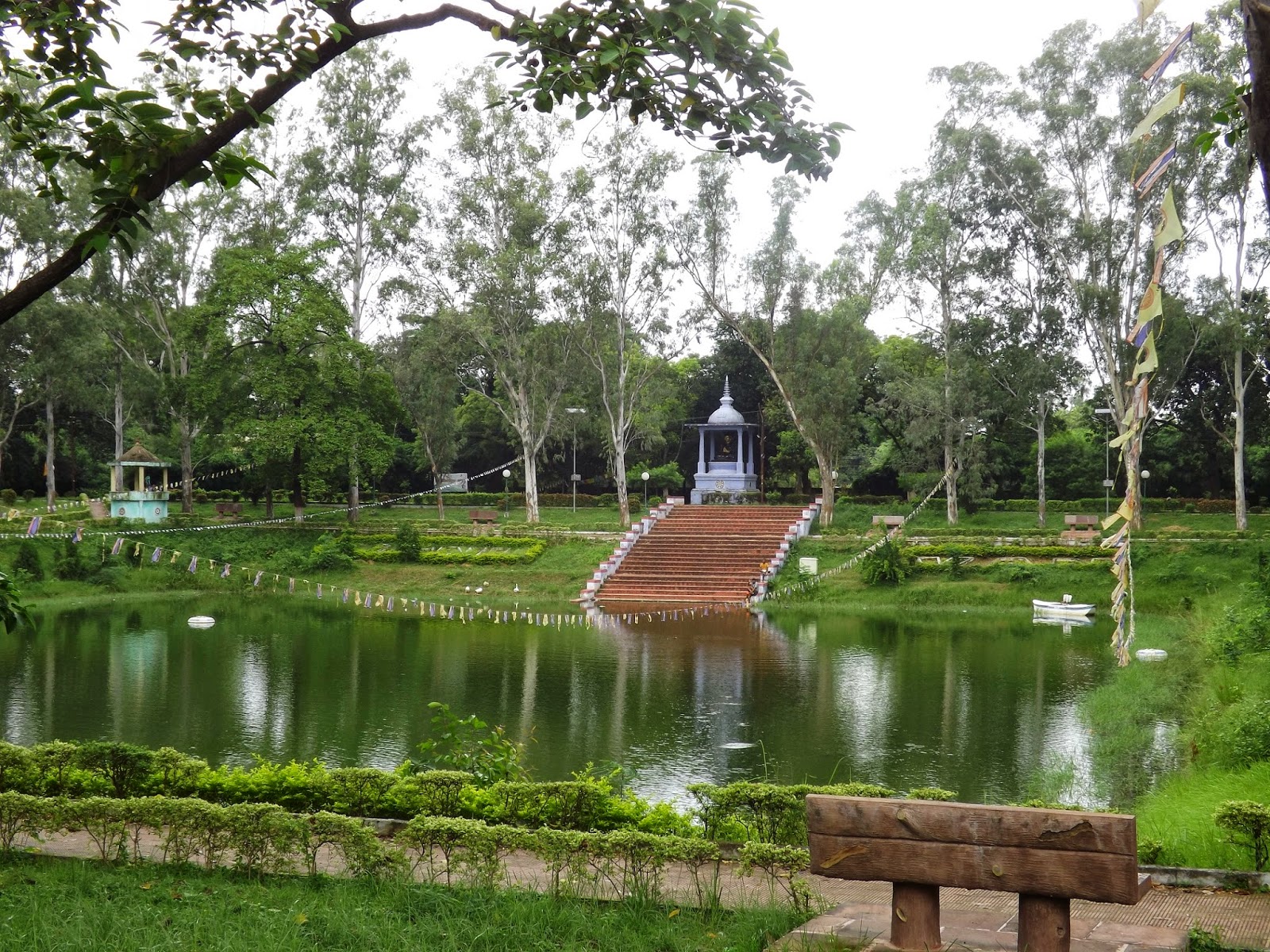 Finally, on the way back to Wat Lao, we stopped at the first land donated to the Buddha to use for his sangha of monks as a teaching and retreat spot.  It is still in use as such, with a little temple, a pretty pond, and a park with lots of flags strung overhead and a golden Buddha statue in the center. 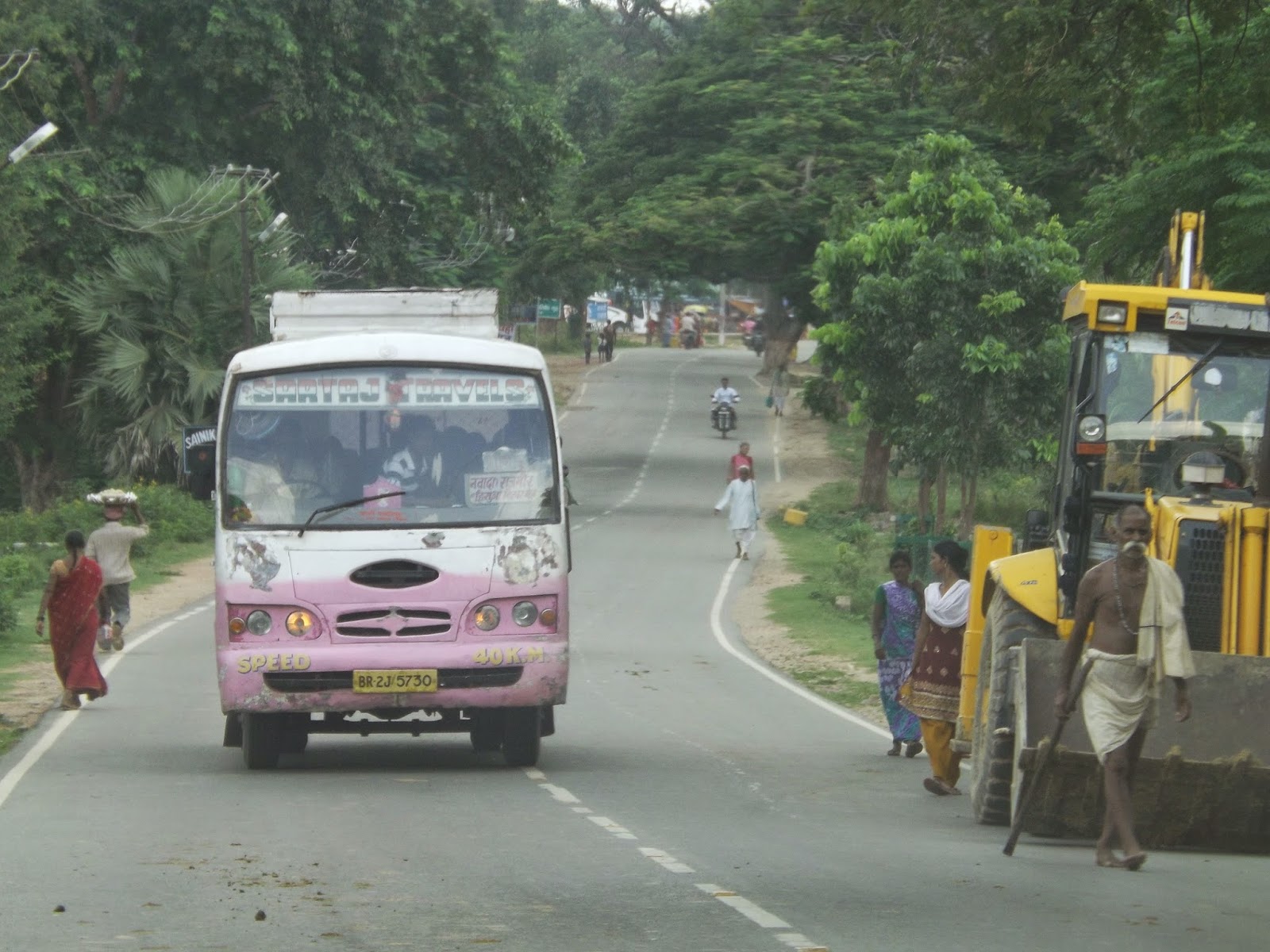 As much as I enjoy sightseeing and being a tourist, I think my favorite part of traveling is the journey in between places.  Whether its by car, scooter or train, I love watching the people, animals, and landscape.  It is very different here in so many ways from the U.S., but many of the differences are in the small things, such as the colorfully painted vehicles with people riding on top, the people carrying amazingly large things on their heads (always in the street, even when there are sidewalks available), the street side food stalls, the advertising stuck to or painted onto every available surface (including boulders along the road), and of course the cows.
Posted by Meredith Cherry on September 15, 2014