Under the Bodhi Tree 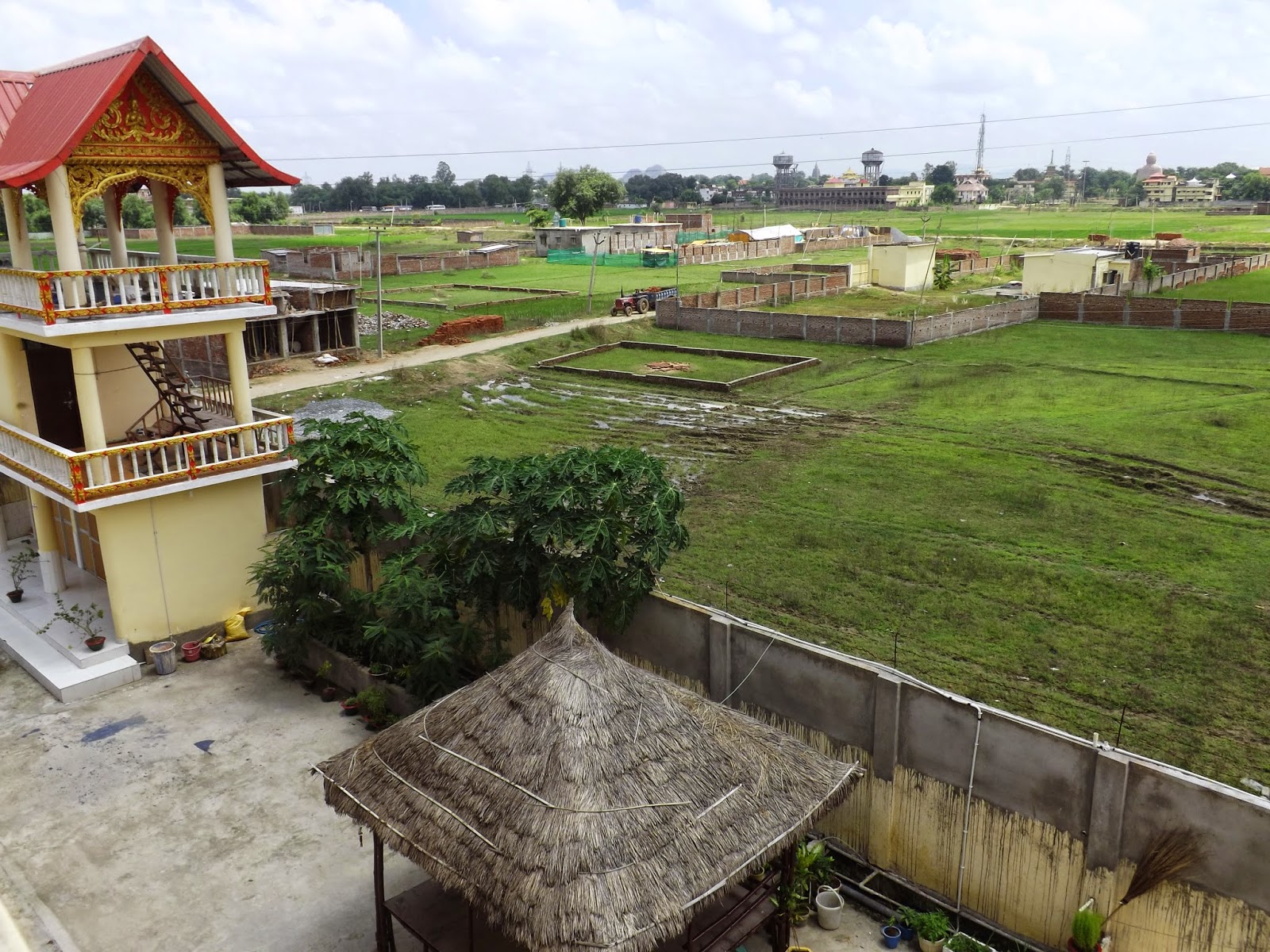 It is very quiet and relaxing here at the Wat Lao monastery.  Each morning I wake with the sun rising to the sound of monks chanting at the neighboring monastery, and bells and gongs chiming across the town. 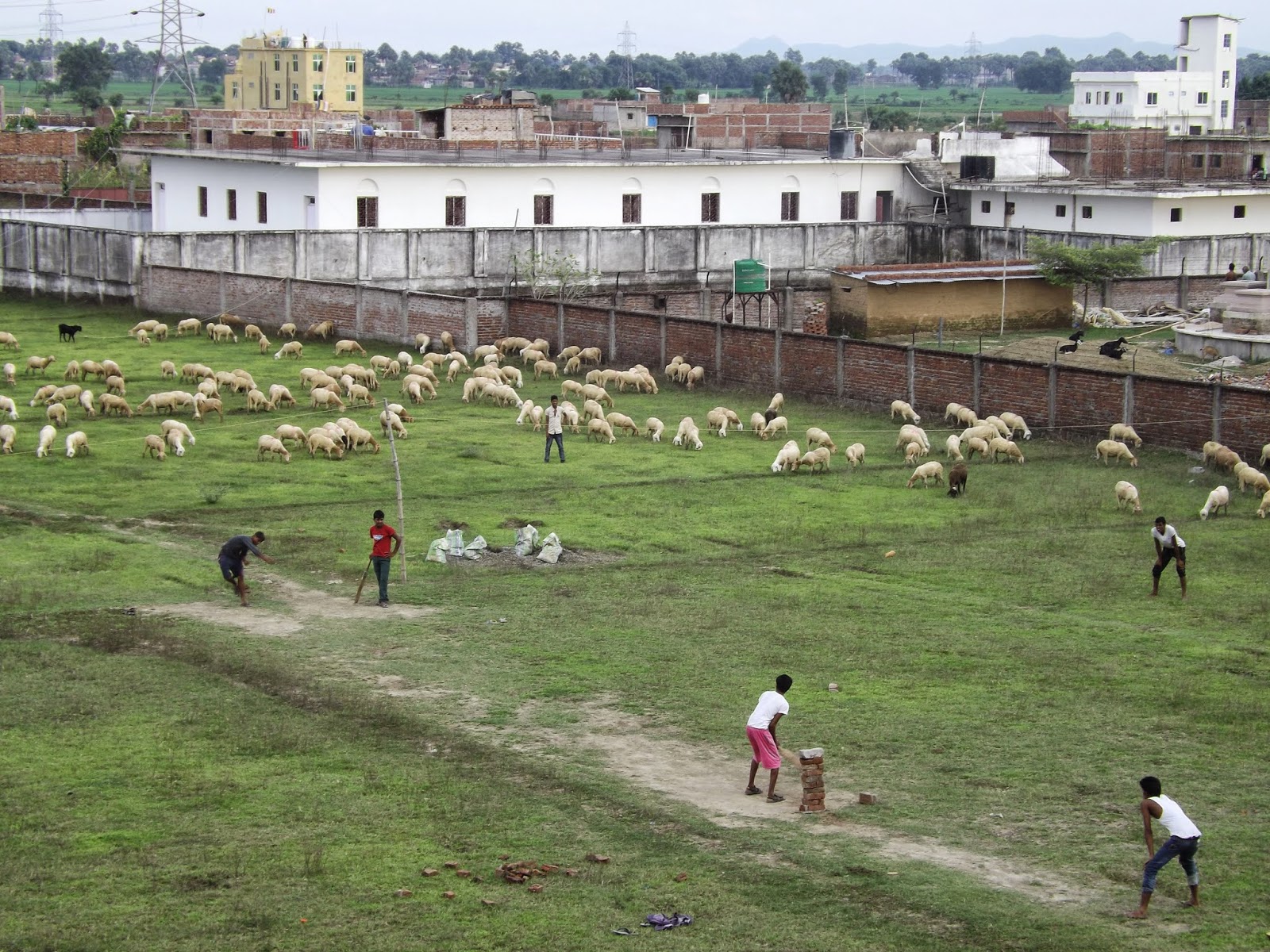 I spent my afternoons watching the happenings outside the temple walls.  Just past the wall is a large field which the local drovers use for their cows, water buffalo, goats and sheep.  They have a daily grazing rotation, each flock moving across the field in turn before moving further east to other fields.  The field is also a popular spot for the local teens to play cricket, and the sheep in the field add an additional challenge to the game.  There is a lot of construction going on nearby, and my favorite part to watch is what I’ve dubbed the Party Tractor, which is one of many farm tractors hauling cart loads of bricks to the construction site.  It is highly decorated in streamers and bright paint, and their sound system plays dance music that can be heard for nearly half a mile around.
One of the junior monks explained to me that apart from this being an important pilgrimage place in its own right, monks like to come here also so that they can understand the dharma better by putting it in the context of the environment and culture in which it was originally taught.  Life in India is now and always has been so different culturally than anywhere else in the world, that some of the lessons and much of the monastic code can be misconstrued when read from another cultural context.

For example, the codes call for a three month rain retreat where the monks should spend the time in study and meditation; while this is not confusion per se, it may not seem necessary to monks living in other countries, but when you are here and see how impassable the unimproved roads are now during this relatively dry monsoon season, you can understand why the retreat was actually necessity to the monks of the Buddha’s day.  This morning we could not walk the short distance to the “main temple” as they call it here (the Mahabodhi temple) due to the deep mud from the rain that fell during the night.


The monks’ lifestyle here amuses me.  They keep to traditions for dress, rituals and monastic codes; however they have a definite love of modern technology and entertainment as much as the rest of the world outside the monastery walls.  One monk has a tablet with broadband wifi so he can be connected anywhere his monastic studies take him.  A senior monk is often found listening to his iPod.   Every meal time, they are all glued to the big flat screen TV on the dining hall wall, on which they like to watch dubbed Chinese movies and Thai music videos and talk shows.


I spent a few hours yesterday evening talking with a junior monk who was eager to tell me about his monastic studies and way of life.  He is 22 now, and just received a B.A. in Buddhist Studies from a college in Thailand.  He became a monk in Laos when he was 11 years old, and has also studied in Burma and now India.  He said his first class in Thailand was on the Abhidharma (a very complex subject), and that as his college courses were all in English he had to learn to speak a new language at the same time! He explained a lot to me about the cultural aspects of Buddhism which I knew little about, as well as some history of the main temple, and how different customs developed as Buddhism spread to new countries in Asia. A senior monk (who lived in a monastery in Florida for 30 years) invited me to walk with them on their sunrise journey to the Bodhi tree at the Mahabodhi Temple, the spot where the Buddha attained enlightenment.  I was honored to tag along, and have made it my morning ritual. The Temple is about a mile away, as the Laos monastery was only built a year ago and thus missed out on the closer real estate that the older monasteries occupy.  However every monastery has a view of the Temple and all are within easy walking distance.  It is actually nice to be further away, as it is quieter (not much traffic on the dirt track they call a road), and the complex is surrounded by rice paddies so it has a scenic view from the terrace. 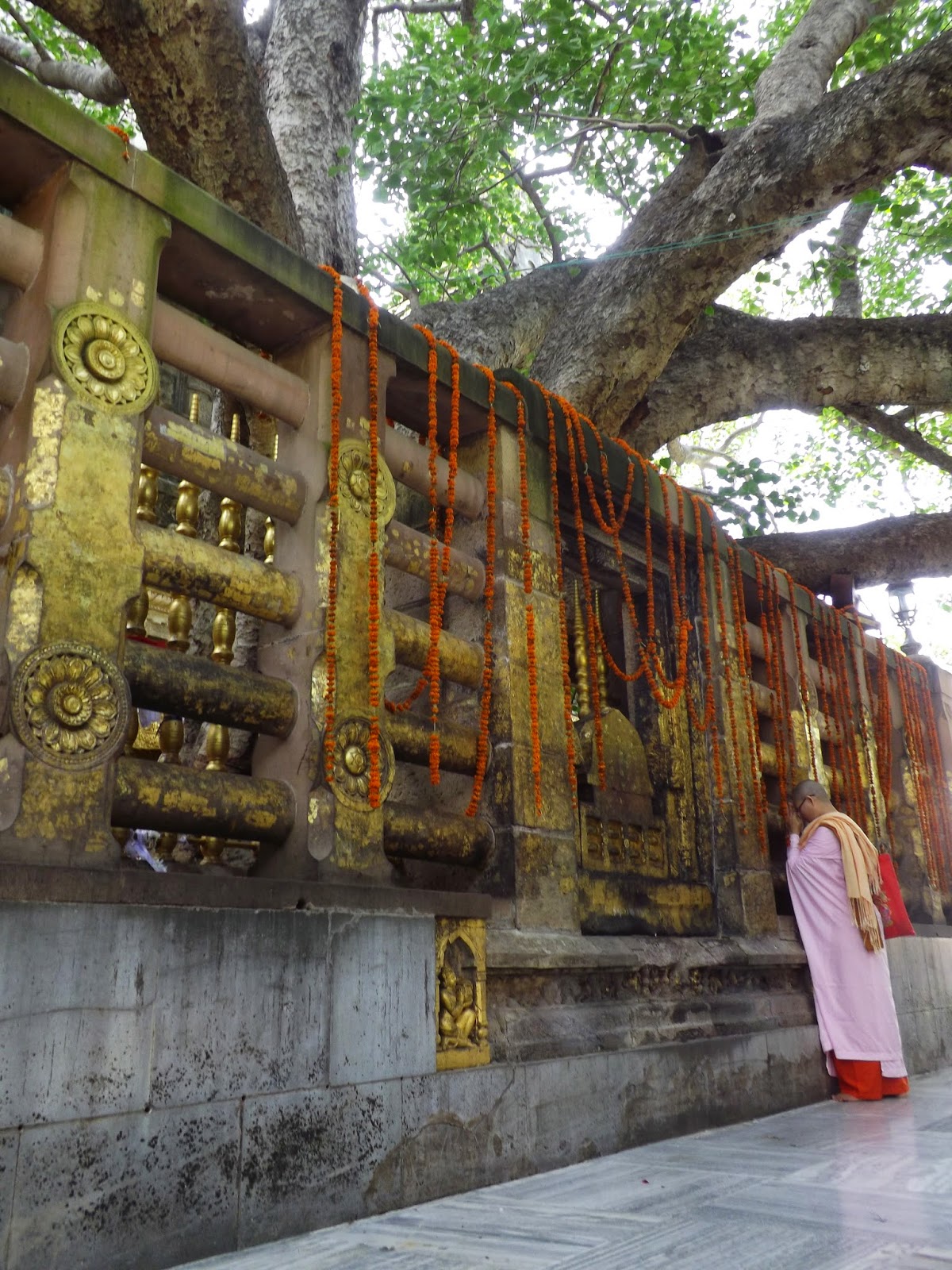 Entrance to the Temple is free if you don’t have a camera or cell phone, so that all the monks and pilgrims can come and worship freely.  I left mine behind for this first trip, as I didn’t want to be distracted by looking for photo ops. While the Laos monks went off to their favorite chanting spot, I wandered around the temple and grounds, looking and savoring.  The tree, a direct descendant of the original Bodhi tree, is located just behind the main temple. 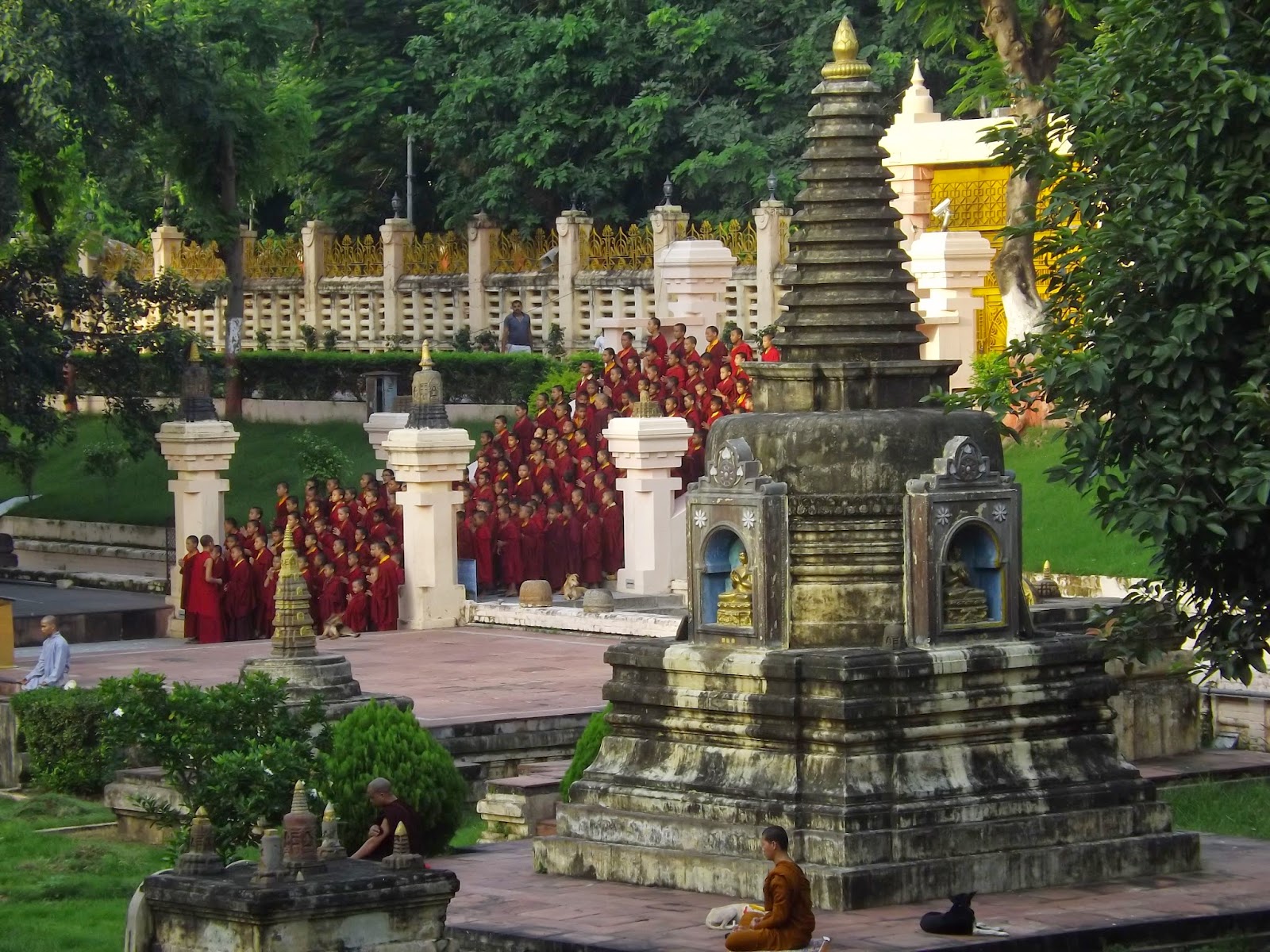 I spent some time watching the many monks, nuns and lay-pilgrims, with their many different traditions of worship.  Most simply did sitting meditation, or walking meditation (always clockwise – very important!  The Buddha’s hair on statues even curls clockwise).  Some monks and nuns also were doing prostrations, where they would walk four steps and then kneel and lie down, repeatedly travelling all the way around the temple.  There was also one morning a large group of young monks (pictured above in red robes) who stood on the steps facing the Tree and sang devotional songs. 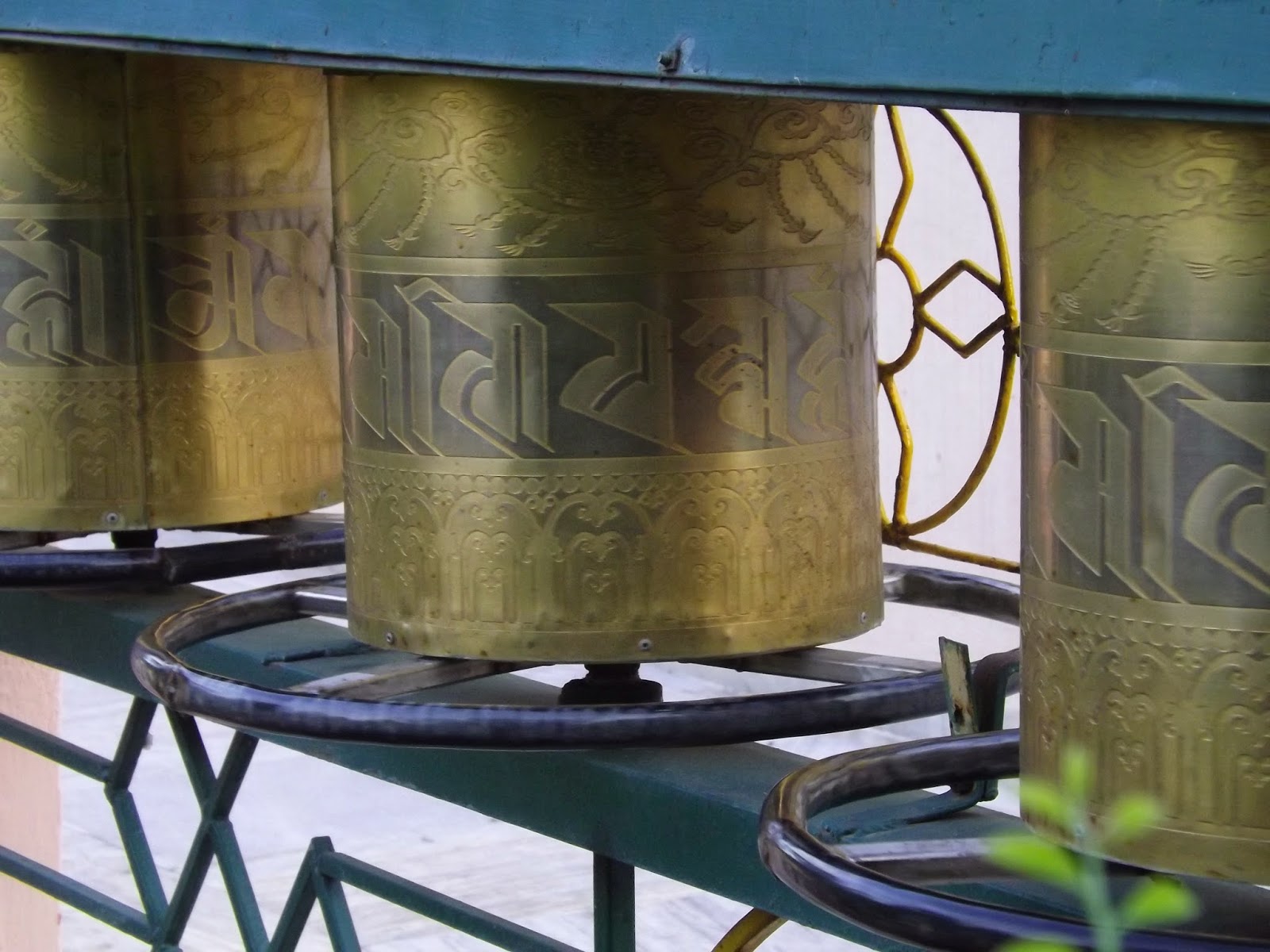 The temple also has an area with prayer wheels, a garden with quotes from the sutras and from the Dhammapada, and many shrines where people would place incense or flowers, so the air was full of sweet scents.  Different groups were chanting in different languages all around, which was quite wonderful to hear how it all blended together to a soothing melodious sound. 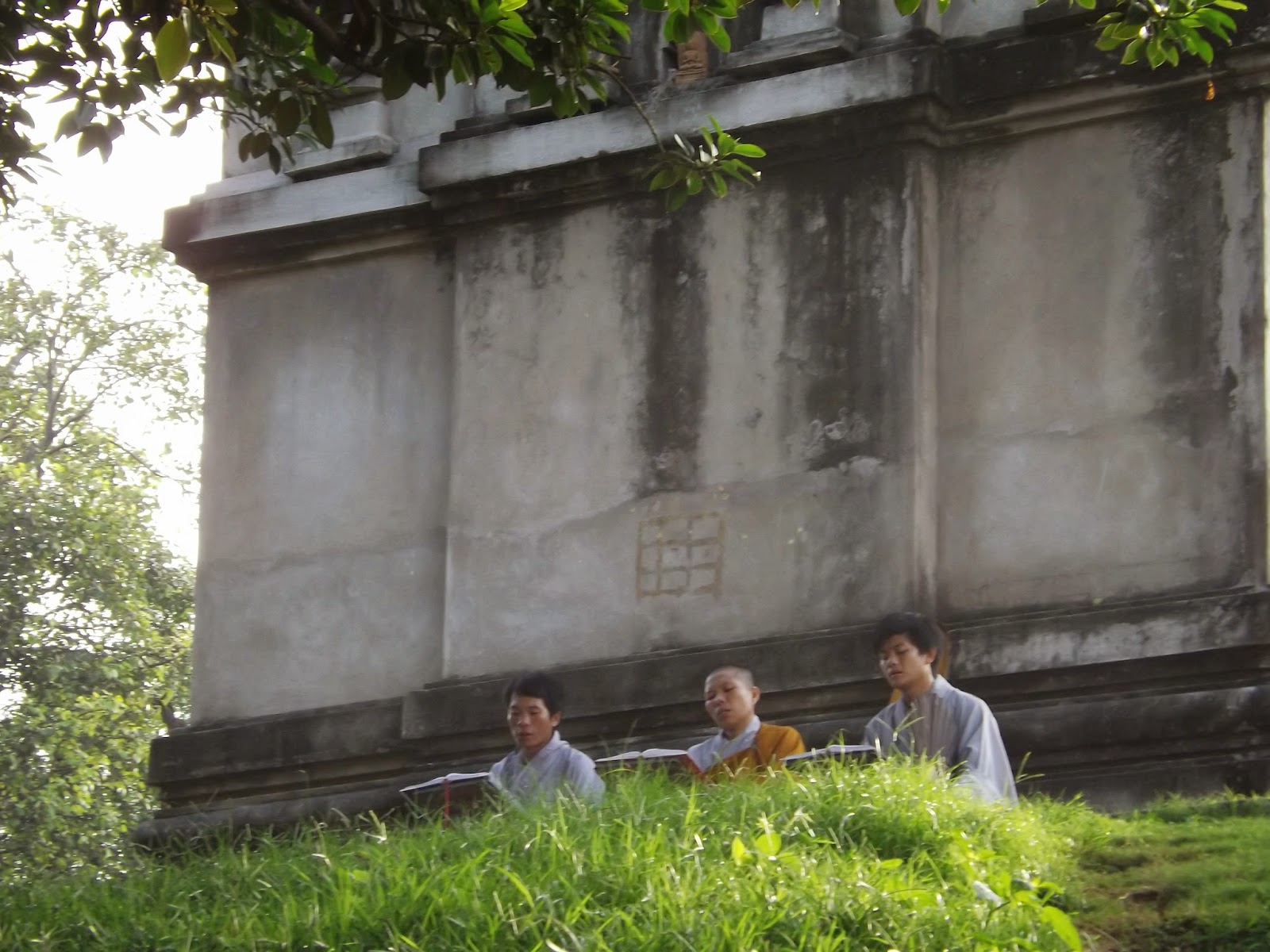 Having brought my pocket-size Dhammapada with me, I passed several hours in study and meditation.  It was very peaceful to sit beneath the tree in this way, with the scents from the altars and the sounds of the monks chanting.
Posted by Meredith Cherry on September 03, 2014