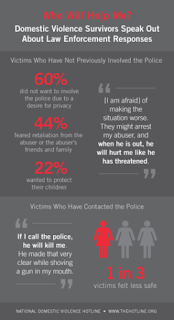 It is an unforunate truth that law enforcement, as a whole in our country, is doing a bad job of dealing with domestic violence.  I do not write those words to insult the blue, and I value and respect their work in protecting their communities.  However, the statistics don’t lie, nor do the untold number of abused women that I’ve talked to about their own experiences with police, not to mention my own nearly 100% terrible experiences as well.

First, though, I would encourage you to read this full report (click on “download pdf” to see the whole thing, not just the info graphic):
https://www.thehotline.org/resources/law-enforcement-responses/

To summarize, half the 500 or so women surveyed had at some point in the past called the police over a domestic abuse incident, and the other half had not.  Of those that had not, many had valid reasons not to (such as feeling they wouldn’t be believed, or that it would not resolve anything and just make it more dangerous for her - both of which are actually common).  Of those that had, most felt that it had not resulted in any positive outcome - either the situation remained the same or got worse because of the police involvement.  Many felt they weren’t believed, were accused of being the abuser instead of the victim, sometimes even arrested.

For myself, the police were called several times (not by me, I was too afraid of reprocussions for that).  Every single time they came out and talked to both myself and my abuser, they believed him.  Every. Single. Time.  The only time they were “on my side” was after I’d been able to flee half way across the country, and the officer was not talking to both of us at once; he had been called by my abuser to do a “welfare check” on me (he was trying to figure out where I was hiding) so it was a little different than the typical DV call, but still, the officer sided with me and agreed to not reveal my location. After so many bad experiences, I was a lot more shocked at being treated nicely than I should have been if the way police handle DV calls wasn’t such a common problem.

What was not addressed in that linked document was what happens when the victim is married to a police officer (or other emergency personnel).  I have met far too many women whose experiences were made so very much worse by the fact that their abusive partner wore a uniform, and that the police stood by their “brother” no matter what the evidence.  Some of the stories they told me were sick beyond words, when obvious harm had been caused and they merely told the abuser to calm down, or some such thing, and left.

It doesn’t have to be this way.

As the document points out on the last two pages, there are a lot of law enforcement policies and training that can be improved. It is not a simple matter of training, although that is a part of it.  The small percentage of women who have had a good experience with law enforcement can teach a lot about how it should be done.

*Police should have a “we believe you” attitude towards the victim.
*They should understand that a hysterical victim is herself not to blame, but that hysterics are a natural response to being victimized.
*The police should offer concrete, productive, useful, actionable solutions for the victim, such as making sure they know about local crisis centers or the National Domestic Violence Hotline, and even escorting them there.
*One example listed of an effective change was adding an advocate position to the police department.
*Few police departments actually work closely with the local crisis center (although they’re always familiar with them, that’s not the same thing), and a good working relationship and colaberation on policy and community outreach etc can make a difference.
*A center I spoke with, where they do work with the local police, is hosting a statewide forum on proper police etiquette and other important issues.  For example, how the reports are written can immensely influence the outcome of later court cases; a well-worded one can bring justice and a poorly-worded one can lead to the abuser walking away.
*The lack of enforcing protective orders is something that both the survey and my own experiences in talking with survivors has shown me to be a huge problem.

What can you do about it? Petition your local police department or even your city council to implement some of the changes listed above or in the document. Talk to your local crisis center and/or domestic violence state coalition to encourage them to take the lead in getting these changes made, too.
Posted by Meredith Cherry on October 21, 2019