A new way to a new state 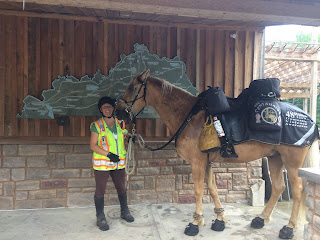 I made it to Kentucky, my 25th state! 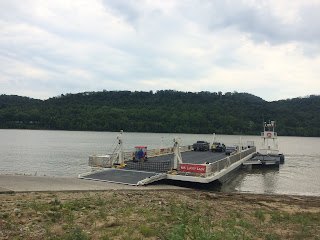 Not only did Apollo and I check off another one, we got there in a different way than usual... by ferry! Apollo has taken a ferry before, to Bainbridge Island in Washington state.  However, that time he was in a trailer.  This time, he was on his own four feet: a much bigger challenge. 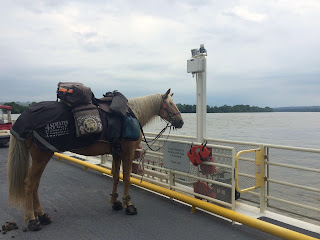 He didn’t think it was much of a challenge, though.  He wasn’t certain about stepping onto the clanging metal ramp, but he only had to think about it for a few seconds before walking up it and calmly standing on the ferry for the whole seven minute ride across the Ohio River. 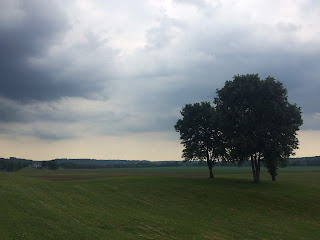 As soon as we got onto Kentucky soil, the skies let loose with torrential rain.  We still had a full days ride to go, though, so Apollo and I resigned ourselves to being wet.  All that water had one benefit, though, because the whole ride was so lovely and green. 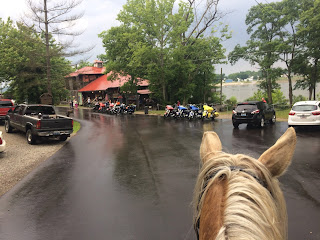 We rode through one town in Kentucky, and it was a very special one.  Rabbit Hash is a tiny historic town along the river, and is one of the quirkiest towns I’ve ever been in.  Their mayor is a dog (a pit bull).  When the general store heard I rode there on a horse, they said to bring him inside - and I don’t think they were joking! He wouldn’t have fit through the doors though, so I didn’t try. 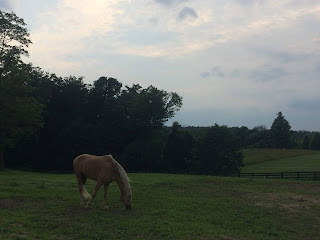 Although I only spent one day in Kentucky, it’s definitely on my list of states I need to revisit someday to explore further.  I loved the tiny bit of the state that I did get to see!
Posted by Meredith Cherry on June 27, 2019