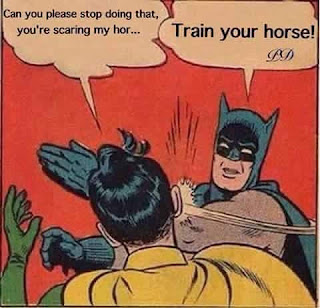 There has been a Batman meme floating around on facebook for a while now, that keeps popping back up on my news feed as various horsey friends share it.  You may have seen it before, you may have been one of those who shared it.  It’s supposed to be funny, but it just makes me mad.  So much so, that I have spent many hours in the saddle reflecting on why, and that’s why I’m writing this blog post.

Let me first preface by saying that I do understand the “train your horse” mentality expressed here.  Yes, everyone should do what they can to train their horse.  Yes, there are horse owners out there who are not perhaps doing everything possible to desensitize their horse to spooking at everyday objects or situations.  And I’ll agree that there are bad horse owners, and they would in many cases benefit from the message to “train your horse.”

The reason I am upset about this meme is two-fold.

First, that it assumes that the horse owner, the one that needs to “train your horse,” is not already doing so or that the thing that is scaring their horse  is something that could have already been desensitized.  There are many reasons this is an unreasonable assumption in many cases that I’ve seen or experienced.

It is simply rude to assume that every person can or should own a horse that has already been fully trained.  Every horse, at some point in its life, has been green.  Every horse, even the best trained horse, can still get scared of something new.  It is simply impossible to train a horse to be non-fearful of every single thing in the world.

Even Apollo, who I think has seen just about everything, still encounters new and frightening objects or situations, and it is normal for him to feel fear about these.  This is part of being a horse, and this is part of the learning curve.  I would even say it is part of being alive.  I get scared sometimes, too!

There are also plenty of horses (in various stages of training) that have had a bad experience in their past.  Not just horses that have been abused, but perhaps they had an accident at some point, or some rough training by a previous owner, or some other traumatic moment.  Trauma of any kind, to a horse, is hard to “get over.”  It is often possible with time and patience to help a horse overcome their specific trauma-induced fears, but it is a slow process.

If someone says that their horse is afraid of something, it’s rude to assume that it’s a training issue.  Maybe that person is already working on helping their horse with that fear, or maybe the horse has been traumatized in the past in a way that it will never fully recover from.

The other reason this meme makes me mad is that it assumes that the person saying “train your horse” knows better than the horse owner, and is justified in ignoring the owner’s request.

If I am in a situation where Apollo is nervous or full-out scared, you can be damn sure I’d ask anyone scaring him to please stop, if asking would help the problem.  Not only is a scared horse no fun to deal with, it can be dangerous to the horse, their person, and anyone else around.

Even if the situation is not dangerous yet, it may become so.  If someone asks you to move more safely around their horse, there’s quite possibly a good reason for it.  Maybe there isn’t, but why assume you know better when it could result in someone getting hurt?

And why would you want to scare someone else’s horse anyway? If their horse is scared, the kind thing to do for that horse (regardless of how you feel about their person) is to help them calm down. Fear is an stressful feeling, especially for a prey animal such as a horse.  Be kind, at least to a horse that doesn’t know any better and is only acting in its nature or how it has been taught.

This is not to say that horses should not be introduced to new things, because even if you only ride in the arena at home, there is always a chance that new things will happen.  A plastic bag could blow by, or a car could backfire, or a stray dog could run at your horse.  Avoiding exposing your horse to new things is not a solution, and is no fun either (or else you will never be able to go on a trail ride, or a show, or a parade, or other new places, or you’ll end up worried about your horse spooking the whole time).

It is possible to train a horse to deal with new situations and scary situations with a minimal reaction, and even no reaction most of the time.   Ideally every horse can achieve this level of confidence and trust in their person, but not every horse will - and every horse has to start somewhere.

But don’t be like Batman, don’t assume it’s your place to desensitize someone else’s horse or blame the owner for not having already done so.

And if I or someone else asks you to not scare my horse, please assume that it is for a good reason and not because of negligent training, even if you don’t understand what that reason is.
Posted by Meredith Cherry on September 19, 2018