Never far from winter - our ride through the Dakotas Apollo and I recently completed our journey through two more states (our 18th and 19th): South Dakota and North Dakota.  North Dakota was the farthest north we’ll travel this year, and good thing too, because this far north it’s already looking and feeling like autumn. 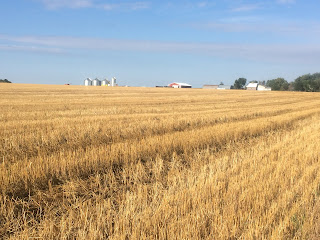 In fact, the whole way through the Dakotas I’ve been told “you’re going the wrong way! You need to go south, winter’s going to be here soon!” I have been hearing that winter is coming so often (and mind you, this was throughout the month of August - the hottest part of the year) that I started to wonder if I hadn’t wandered been transported into a Game of Thrones universe. 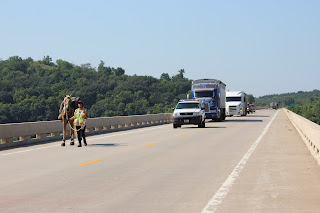 We entered South Dakota over the Missouri River - my third time crossing it, and the second time with a police escort.  It was a really big bridge, to say the least.  It took a month to cross the state south-to-north. 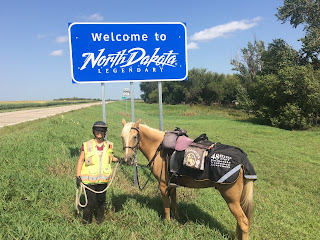 Finally, a whole lot of corn and soybean fields later, we reached the North Dakota border.  I spent a whole two hours in the state, and that was enough. It had turned cool and rainy, and it was time to head south.  After all, winter is coming.

Here are some of the highlights of our ride through South Dakota. 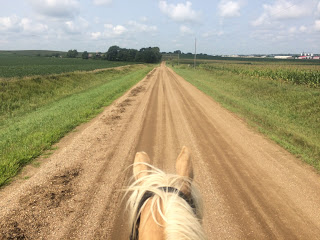 Corn and soybean fields were mostly what we looked at each day. 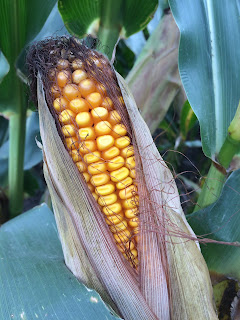 This region grows a lot of corn for animal feed and ethanol, and I watched it mature almost to the point of harvest. 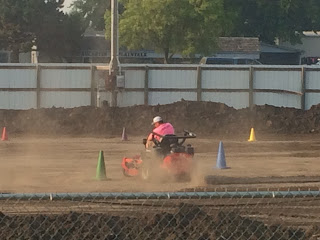 I went to several county fairs.  My favorite thing was watching the lawnmower races. 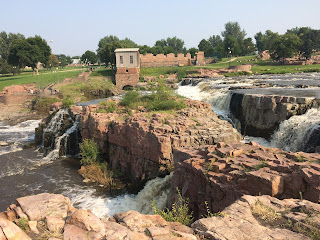 Sioux Falls is named for these beautiful waterfalls. This city also had my least favorite road of the state (and on my top 10 worst roads so far). 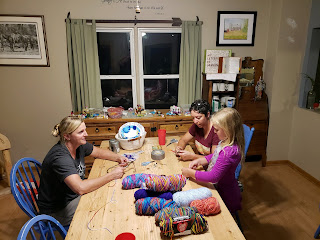 One of my favorite days was when I spent a whole afternoon and evening making crafts with Raelynn (and also, briefly, her mom), and eating kid food like otter pops and cupcakes with blue frosting. 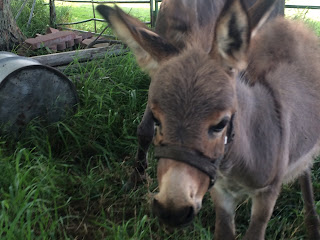 The cutest donkey in South Dakota. 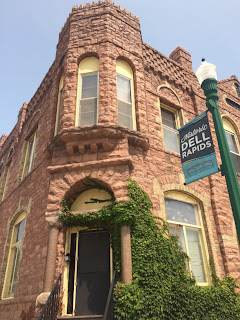 Dell Rapids was my favorite town to ride through, with all the pink buildings and pink roads, and all the friendly people. 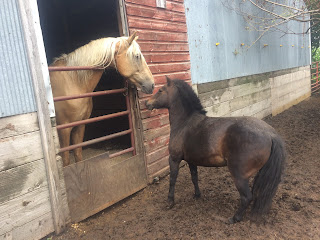 Apollo made some new friends, too! 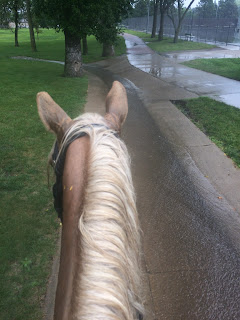 It rained often.  Sometimes there was no other option but to keep riding through the storms. 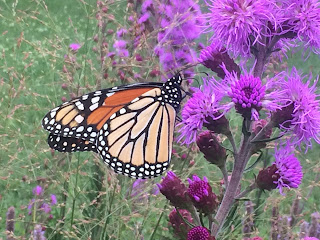 The monarch migration was happening as I rode through.  It was always a beautiful and exciting sight to see these giant butterflies flitting about. 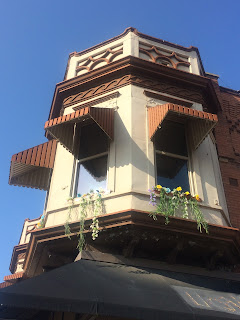 I also enjoyed the town of Brookings, which had the best Main Street.  Lots of old buildings filled with shops, coffee bars, and eateries. 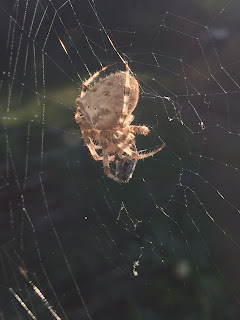 For about 100 miles, these huge spiders were everywhere.  And then they weren’t.  It was very strange, like I crossed some invisible spider fence around their territory. 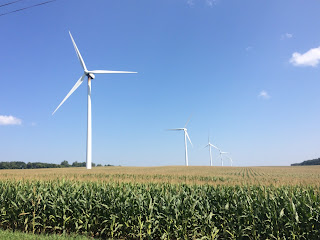 It’s often windy in these flat states. A great place for wind energy! And the corn growing underneath may be destined for ethanol. 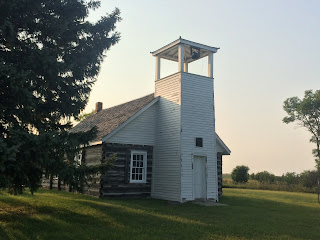 The most interesting old building, an “Indian church” made from rough-hewn logs. 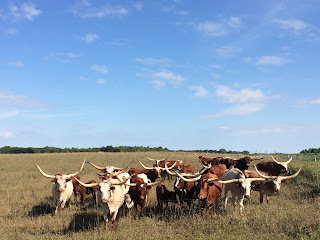 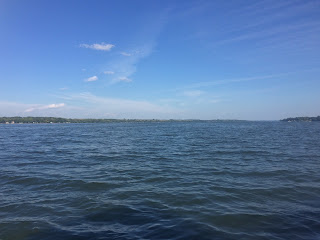 I spent a relaxing afternoon on a boat (Apollo didn’t get to come along), cruising Big Stone Lake on the SD-MN border.  This and the neighboring lake - Lake Traverse - are on opposite sides of a continental divide so they flow into rivers going opposite directions along the border. 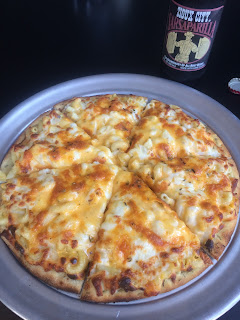 Of course I ate a lot.  Mac and Cheese Pizza was a new idea to me, but on several menus I saw through the state. 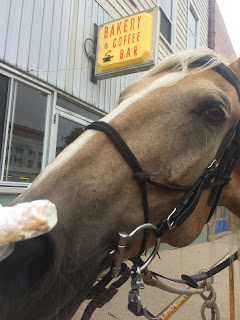 Apollo’s favorite food stop was the bakery in Flandreau.  He shared my cream horn (pictured) and several people bought him oatmeal scotchies (a cookie).  This was also the funniest “coffee bar” I’ve ever been in.  They had two options for coffee: regular and decaf. 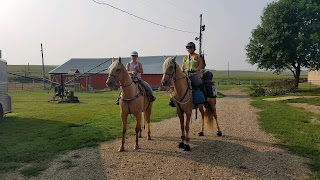 South Dakota was the place for company on my rides! I had more people join me for an hour or a day here than possibly every previous state combined.  Raelynn was the first kid to ride along. 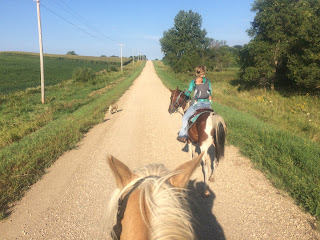 Tracie carried her baby while riding, who became my youngest riding companion at less than a year old. 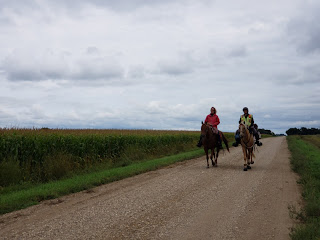 Kris joined me on my longest ride of the year, and the longest anyone has ridden with me, for a 20 mile stretch near Milbank. 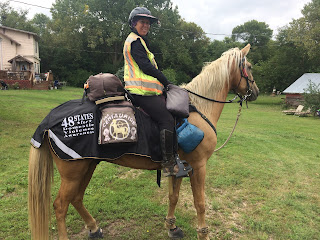 And since winter is coming, we finally get to use Apollo’s fancy new quarter-sheet, generously embroidered by Bird Dog Embroidery.  Looking good as we start south and pass our half-way point for the year!
Posted by Meredith Cherry on September 07, 2018