Gosh, looking back at what all I did in June, I’m not sure when I had time to sleep!  Not only did Apollo and I get back on the road for the last week and a half of the month, but I also managed to keep up with my weekly “hands on learning” goals for the year.  If you’ve missed this series, click on the keyword 52 Weeks of Learning on the right-hand sidebar to see what all I’ve been trying this year.

June brought warm weather and summer activity options, so I got outside to play... 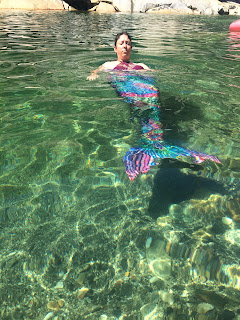 
My breathing exercises from last month continued several more weeks, and by the end of my scheduled routine I had improved my breath-hold time by 150%! This came in very handy when I got in the water to learn how to be a mermaid.  Mermaiding is a relatively new swimming activity, where you put both feet in one monofin, and then slip a colorful mermaid tail over that.  Using a modified dolphin kick, the newly transformed mermaid swims around comfortably, at least after a few hours of practice.  I will admit that I was more of a flounder than a mermaid at first.   After a solid week of practice, I was ready to swim out of the pool and in the Yuba River.  Now that I’m back in the saddle, I miss my mermaiding time... definitely something I’ll keep doing when I go home again in the winter! 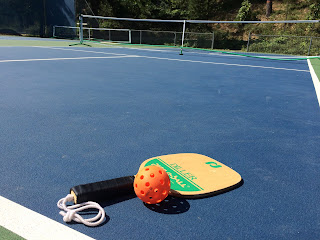 
Another good activity for sunny summer days, pickleball is called the fastest growing racquet sport in the world (or something like that.  Don’t quote me.). There’s a club in my hometown, and they had a free clinic to teach newbies how to play.  It’s not hard to learn, but as I found out the next day when I went back to actually play, it can be very difficult to play.  The day after learning, I was teamed up with three experienced players (the game is played as pairs), and got to experience first-hand the speed and tactics involved once you know what you’re doing.  It was lots of fun, and great exercise.  Maybe I can find some pickleball games to join in on during my ride!

I found a (free!) tai chi group near my house, and decided to give it a try.  I’ve done Qi Gong and also various types of Yoga before, and while I could see the benefits of doing them, neither were a good fit for me.  Yoga was too awkward, and Qi Gong just kind of boring.  So I was happy to find that I really enjoyed Tai Chi.   I felt so peaceful and grounded while I was doing it, even in the first class where I didn’t really know what I was doing.  Plus it really helped address the various aches and pains I had been feeling before each class. I especially liked doing this just before mermaiding to loosen me up and focus my attention. 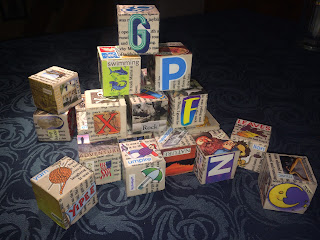 
Not all my June activities were done out of doors.  I also spent quite a few hours teaching myself how to do the craft called decoupage, which more or less translates from French as cut-and-paste.  Basically, you cut up colorful paper and glue it onto whatever surface you’re decorating, then cover it with a sealant.  More skilled decoupage artists than myself can turn a simple object like a jar or a flower pot into a work of art, using various papers to make the object look like they’ve intricately painted it.  My own project was a full set of alphabet blocks for my friends baby.  I think they turned out great!


The language of the month is Swedish.  I was really surprised to find that this is a very easy language for me! A lot of it feels like English with an accent, and the rest just seems very logical.  Both the words themselves and the grammar made sense to me.  I was a little disappointed when the end of the month arrived, because I wanted to keep learning this wonderful language.  Maybe I’ll come back to it later; in the meanwhile I will give another Scandanavian language a try.
Posted by Meredith Cherry on July 03, 2018