An Almost Forgotten Long Ride: The 3R's to Oregon 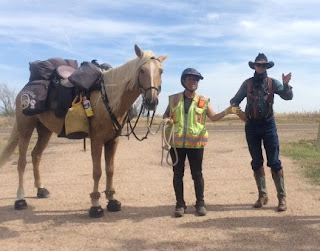 While I was travelling through Kansas I had the unexpected opportunity to spend time with long rider Robin “Rob” Hull.  On April 13, 1980, when he and his buddies Roger Dunn and Randy Brooks were in their early 20’s, they set out on a 139 day ride from their home near tiny Rolla, Kansas.  Their destination of Scio, Oregon was 1,700 miles away.  They called themselves the 3R’s and their ride The 3R’s To Oregon.


The 3R’s were riding because they felt gas prices were too high – 89cents/gallon! -- and wages too low to afford it.  Plus, they wanted to experience life like it was in the old days.  They all came from ranching and rodeo backgrounds and knew how to ride and pack.  So with a riding horse and a pack animal apiece, they set off for the ride of their lives.


They had four horses and two mules between them: Sorrely, Gray, Mistake, Stoped, Jack, and Jenny.  Stoped was originally named Spotted but the name was misspelled on the bill of sale and it stuck.  Mistake was named by one of the rider’s fathers, the local preacher, who thought the ride was a bad idea.  Fortunately the horse (or the journey) did not live up to the name.


They set out following rivers first into Colorado, then northwest into Utah, Wyoming, and Idaho before crossing into Oregon.  Interestingly, they were on the road heading into Burley on July 14, the very same day that I was at that spot heading out of Burley 37 years later!
They mostly rode across wilderness and country fields, avoiding roads and towns when they could.  Even still, they managed to meet quite a few helpful and interesting people who would invite them to supper or hand them all a beer and a sandwich as they went by.  In Idaho, there were so many friendly people that they never had to cook their own supper once, and sometimes had to turn down invitations for having received too many!
By sticking to the rivers, they avoided any problems with finding water for themselves or their mounts.  Sometimes grazing, or food for themselves, was scarce though, especially when they hit snow in the Colorado Rockies and when they got to the deserts of Utah.  Many of their own meals consisted of only beans, as food supplies dwindled.  Riding by a town or filling station was a welcome opportunity to get fresh food and cold cokes.


Their journey was full of adventures and the stuff that makes great stories.  One night, they had to chase loose horses wearing only their cowboy boots.  Often they were up until midnight shooting the breeze with friendly locals over beers around the campfire.  Then there was the time they ate too many beans and cokes, and were along a busy highway with no bushes…


Having started off with one green horse and one mule that had never packed, an argument over the merits of carrying a heavy cast iron dutch oven, an early spring start before the weather had actually cleared, and perhaps a lot of youthful enthusiasm and testosterone than sense, these three men made their journey in a remarkably short amount of time without serious mishaps. Rob told me that he never once regretted the decision to set out from home on his Wild West adventure. 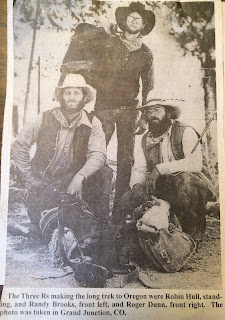 A newspaper clipping from their ride through Grand Junction, CO
Posted by Meredith Cherry on October 29, 2017