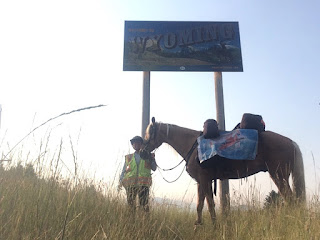 Wyoming was full of surprises.  Mostly not the good kind. 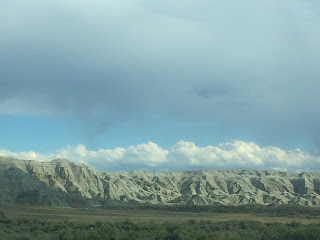 I had expected Wyoming would be a difficult state for this ride.  Having gone to school not far from the Wyoming border, I have driven quite a lot of the state both for fun and on my drives home for holiday vacations.  I knew going into the state this time how far it is between towns, and even between homes.  And how little water there is to be found in many places.  Or grass.  Or shade, on a sweltering August day. 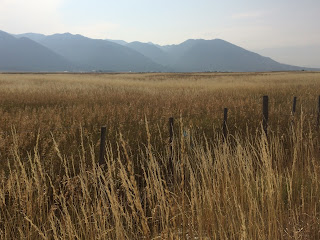 I rode into the state on the far side of the pass into Jackson Hole, in the Tetons. Maybe not technically in the Teton mountains, but within sight of them.  Maybe at the south edge of that lovely range.  I think.  If it had been clear, I'd know better. 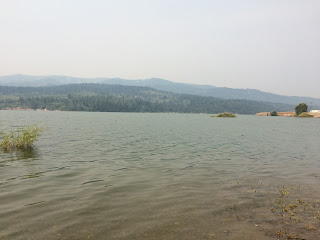 Because that was the problem I actually had with Wyoming.  The smoke was so bad from fires to the north and to the west that I could barely even see the mountains I was standing next to as I went through Star Valley.

The smoke had been worsening since we had reached Teton Valley, Idaho, a week before.  Every mile south brought worse visibility, and was making Apollo cough harder and more frequently.  By the time I got to the Wyoming border, I was no longer riding him so he didn't have to exercise so hard.  And I was stopping every other day to rest his lungs.  Since he was resting in the smoke though, it didn't seem to do much good. 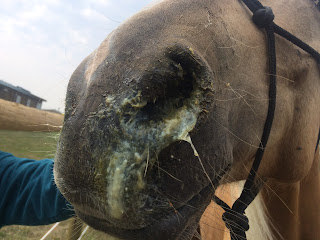 In fact, only three days into the state, his health deteriorated overnight into a nasty respiratory infection.  I awoke that morning to masses of green goo coming out of his nose.  The closest vet was 10 miles south, so we proceeded to walk very slowly to see her (the pioneer house below was the only "point of interest" we saw in Wyoming) 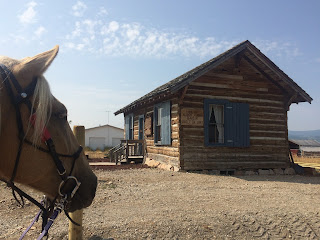 Dr. Lisa looked him over, took some cultures, and gave him a few rounds of shots.  She kindly allowed us to stay there a couple of days while he got more shots and I worked on finding us a way out of the smoke. 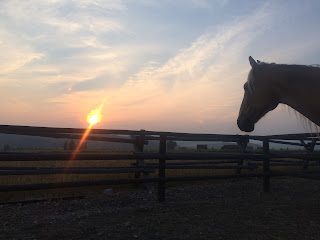 So most of my time in Wyoming was spent giving Apollo around-the-clock care and attention, mostly with encouraging him to eat lots.  I hand-picked his favorite grasses and weeds, mixed up yummy high calorie snacks, and stood with him while he very slowly picked through it all.  Being sick is no fun for horses either. 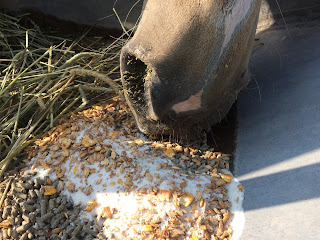 Meanwhile, Hermes had the run of the hay barn.  He sure loves exploring all these new places! 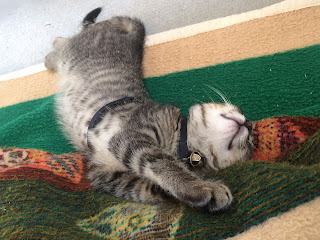 In the end, I got an offer from a super-wonderful couple in Vernal, Utah to trailer me there.  I was sad to have to skip so much of Wyoming, which for all its expected hazards is a really pretty place (and I never did need to ride in a dry or grass-less area!).  But Apollo's health and safety comes first, and being able to get him south of the smoke zone on short notice was a minor miracle. 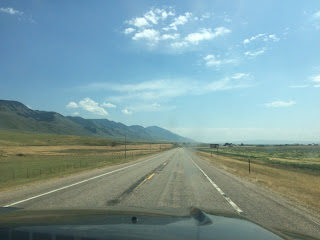 Posted by Meredith Cherry on September 02, 2017