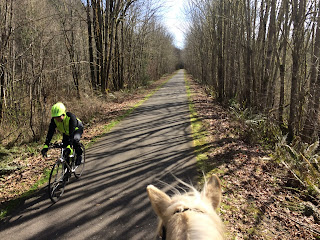 When I was planning this ride, one thing I heard from several long riders was "stay out of the cities."  Indeed, whether it's in a city or on a rural highway or a small side road, the biggest danger Apollo and I face every day is from vehicles.  Cities are only worse because there are more cars.  But in some ways, cities are better because in most cities there is a bicycle culture.

Why does this matter? As much as city drivers and cyclists tend to loathe each other, the drivers are at least used to watching out for cyclists.  Also, cities usually have bike lanes and bike paths to provide a safe and direct thoroughfare in highly trafficked areas.  When choosing a safe route for horse travel, I like the same sort of places as cyclists do - out of traffic, flat, and as short a distance as possible.

There are many things that can be learned and adapted from bicycle safety when it comes to preparing a horse for road travel.  For both, visibility is perhaps the most important aspect.  If a car doesn't see you, you're toast.  And while you might think that a half-ton, 6-plus foot tall animal on the road would be hard to miss, you'd be surprised how many people either don't notice or ignore us as they drive by in their isolated metal bubbles.

Visible Clothing
As many cyclists do (or road construction guys), I wear bright yellow with reflective tape.  Apollo also has reflective tape and bright colors on the back of his packs.  Though I try not to ride in the dark, on overcast or rainy days the reflective tape does its work well.
I have heard horror stories of people who ride their horses at night while wearing black.  Bad idea.
On the same note, it also helps to have a light colored horse.  Apollo is about as close to Safety Yellow as they come!

Lights
Another key to visibility is bicycle tail lights.  Like bicycles, horses are supposed to ride "with traffic" (on the right side of the road), as they are considered a vehicle too.  Red lights on the back of his packs (no, not on his tail) help alert drivers that we're there.  Flashing lights are best, because they're more visible and because they work like hazard lights in a car, signaling drivers to my "vehicle" being a slow moving obstacle on the road.

Bells
Some cyclists put bells on their bikes, so they can alert pedestrians and others as they approach.  Apollo wears bells on his front legs for the same reason.  Though he clip-clops loudly, the bells are more noticeable.  They also alert wildlife to our approach so they can move away without being startled.

Mirror
I wear a bicycle helmet rearview mirror on my helmet.  Just as for cyclists, it allows me to see cars coming up from behind, without having to turn around in the saddle every time I hear one.  This way, I can watch our backs and judge if the car is going to "pass wide" as my vest sign requests, and if the vehicle is one that may scare Apollo I can tell in advance so I can be ready.  Though I still look back over my shoulder before "merging" (for shoulder-less areas and bridges), it saves me a back ache for normal road conditions.

Helmet
The first rule of bicycle safety is always wear your helmet.  Same for horses.  And especially on the road.  While I don't feel comfortable riding without a helmet, ever, I would never ride on a road without one.  There are too many things that can go wrong and result in your head hitting the ground. And road pavement-ground is way more hard than arena sand-ground!
Posted by Meredith Cherry on July 09, 2017