Apollo has had several pasture mates during the last three years, but he has never bonded so well as with Cal (and often quite the opposite, Apollo is quite particular in his horse friends).  They are truly two peas in a pod.  They are the same height and build, the same mischievous and playful temperaments... even their nose stripes match! 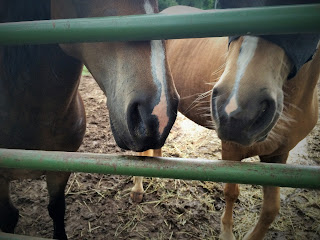 For a while I wondered if they were cousins or perhaps even long lost half brothers, the similarity and bond is so strong.  However, Apollo's wild mustang sire is from eastern Nevada, and Cal is full mustang from a herd in western Nevada.  The two bands would not have crossed in recent history.

It is so cute to watch them together.  They love to race each other around the big pasture, heels flying for joy.  When one leaves the pasture to work with their own human, the other cries out for them and waits at the gate for their return.  When they eat, they do it nose-to-nose, even when grazing.

They do not share people, though.  When I come for Apollo, he is quick to tell off Cal from getting friendly with me.  "She's my property, keep your nose off!" he seems to be saying.  And Apollo has no interest in socializing with Cal's person either.

Of all the changes that the Centauride will bring to both of our lives, I sometimes think that the hardest will be to break up his friendship with Cal.

While I hope that once we've been traveling together for a while, I become Apollo's best friend, I have to admit I come in second at this time to his BFF Cal.
Posted by Meredith Cherry on December 08, 2016

Email ThisBlogThis!Share to TwitterShare to FacebookShare to Pinterest
Labels: Apollo