Gearing Up For A Long Ride 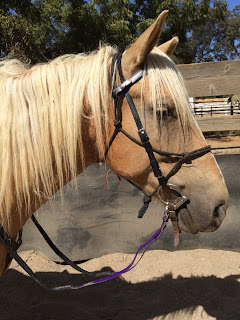 It's hard to believe that after almost three years of planning, my ride is less than three months away.  A big part of my recent preparations has been equipping.  I've still got a way to go yet before I have all the (minimal!) gear that I will need for myself and Apollo, but the key items are done.

You've already read about my wonderful saddle from TW Saddlery.  Soon you'll read about the hoof boots being donated by Cavallo (no hoof, no horse).  I have also recently bought a good quality helmet (no head, no rider).  And now, thanks to Riding Warehouse, I have a lovely new halter-bridle, which I am in absolute ecstasy over.


First, for the horse-newbies- a halter is what a horse wears while you lead him, tie him, etc, and to which the lead rope attaches.  A bridle is what he wears when you ride him, and to which the bit and reins attach.  These are non-interchangeable, in other words, you cannot attach the bit to the halter in a normal situation, and you should not attach the lead rope to the bridle ever.

Sometimes, the bridle is worn over the halter, but they are not really meant to fit together like this.

A halter-bridle is a combination, as the name implies. It is a halter for the base, and has an extra part that converts it to a bridle.  In the case of the one I am using, it is actually my normal halter, and the bridle part looks mostly like a bridle but is designed to be used in combination, so it sits comfortably on Apollo's face with the halter still on and is easy to take on and off as needed. 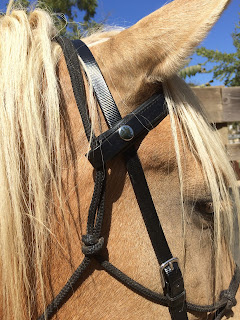 The other feature I especially like about this model is that it sits like a regular bridle, instead of just clipping onto the side of the halter.  Should the snap that holds it to the halter ever break, it will still be functional, unlike the aforementioned clip which if it broke would cause the bit to fall off (which could be disastrous).

Did I mention it's black and purple like my saddle? I feel so stylish.

In short, with a halter bridle, I do not have to take extra time to switch between equipment.  On a long ride, the equestrienne walks as well as rides, and also stops frequently to graze the horse.  Every time I dismount I need to use the halter and lead rope, and every time I mount I need to use the bridle and reins.  Taking off one and putting on the other hourly (or more!) is a headache.

Also, with limited saddle and pack space, it makes sense to let the horse wear them both while moving.  When I need to graze him, I can remove the bridle to make it easier for him to chew without accidentally letting him loose because he'll still have the halter on.

The first time I used it on the trail, I was extremely grateful for it.  On that day, Apollo got very anxious and I decided to lead him part of the way while he settled back down (it was safer for me, and he is more calm when being led than when being ridden).  Since he still had on the halter and lead rope, it was simple to dismount and begin leading him immediately, without having had to carry a separate rope or improperly leading by the reins or trying to unbridle a nervous prancing horse.

So three cheers for my new halter-bridle!  And more exciting equipment news is soon to come...
Posted by Meredith Cherry on October 07, 2016