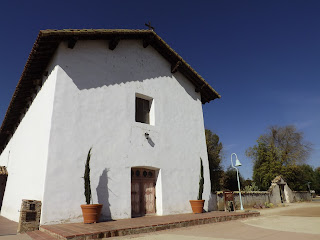 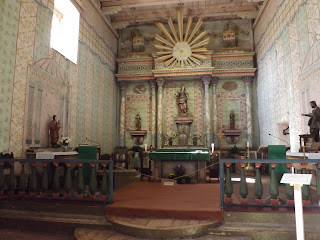 A temporary church was built in 1797 but was lost to fire in 1806, at a time when more than one thousand neophytes were living and working at Mission San Miguel. Preparation for a new adobe church began soon after. Tiles and adobe blocks were made and stored for 10 years before the stone foundation of the church was laid in 1816. By 1821 the church was completed along with the interior frescos.  A colonnade which leads to the church contains twelve arches of different sizes and shapes, unique among the California missions.  The fountain in front of the mission is not original (it was built in the 1940s); the design was adapted from the fountain in Mission Santa Barbara. 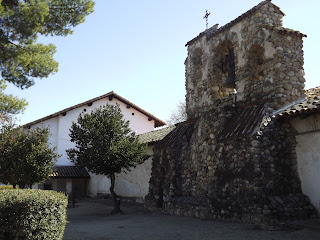 Mission San Miguel never had a traditional bell tower. In the mission era bells were hung from a wooden beam in one of the archways. The bell which currently hangs there was cast in Mexico City in 1800. A bell tower located inside the mission cemetery houses three bells, the largest of which weighs 2,000 pounds and was recast in 1888 from six cracked and broken bells from other missions. This bell tower was designed and built in mid 1930s. The large bell is used to sound the Angelus. There is another bell tower at San Miguel, a brick companario located on the south end of the mission property. The bells which hang in it are not real, but cast in cement. This bell tower was built in 1950s.


Mission San Miguel was secularized in 1834 and put under the control of a civilian administrator and at the time, there were only 30 Indians left at the mission. On July 4, 1846, Petronillo Rios and William Reed took possession of the mission Buildings and the Reed family occupied the recently abandoned mission. Following the murder of 11 Reed family members and household staff, the mission rooms were converted to commercial stores including a hotel, saloon, and retail shops.  President Buchanan returned the mission buildings and surrounding property to the Catholic Church in 1859. A resident priest was assigned to Mission San Miguel in 1878 and the mission parish was established. 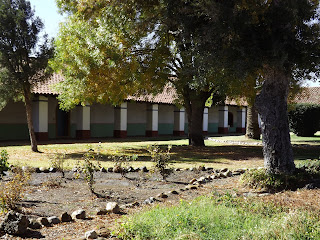 On the morning of December 22, 2003 the coast was rocked by a 6.5 earthquake, the largest to strike the region in over 50 years.  Old Mission San Miguel, located just 35 miles from the epicenter, was especially hard hit. All of the Mission's buildings were rendered off-limits to the public. Numerous cracks and fractures appeared in many of the Mission's walls. Entire sections of plaster sloughed off, exposing the vulnerable adobe beneath to the elements.  It has since been restored.


The mission is now a novitiate for training young Franciscan men.  Many parts of the mission are closed to the public.
This mission is also the home of the funniest parking lot signs I've ever seen: 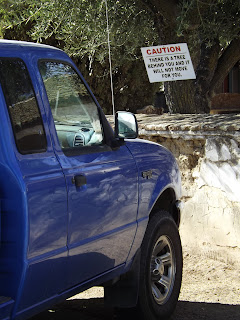 Learn more about the missions and other great places to visit along the coast in “Along the King’s Road: A Guide to Touring the California Missions.” Get your copy today!
Posted by Meredith Cherry on October 27, 2015