Tough decision this morning on what to take for lunch - leftover pasta with cauliflower sauce again, or leftover couscous from last night?  The couscous won this time...

Breakfast was an easy choice, as I still have oat griddle cakes.  Which are, by the way, awesome cold.  Good thing, since I ran out of time to heat them up again.

By the time I got home from work and gym, I was craving every food that popped in my head, and none more so than the ice cream that is still tempting me in the freezer.  But I was prepared against cravings and lack of time to cook tonight!  I had already picked out my recipes of the day - Sourdough French Toast and a Green Smoothie. 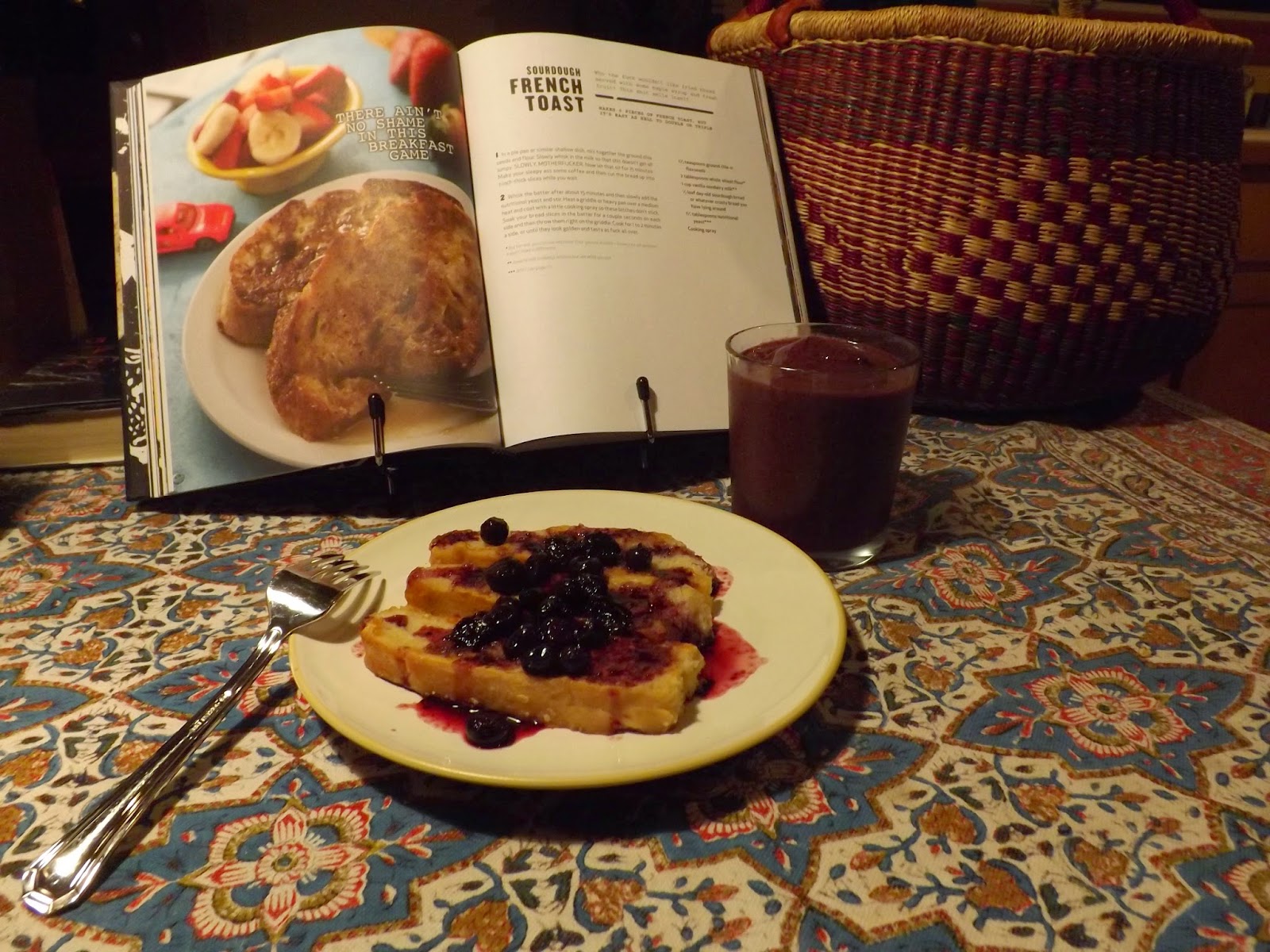 I actually had planned on eating this meal last night, but had neglected to freeze some fruit in advance for the smoothie.  The Thug Kitchen cookbook intrigued me with their green smoothie subtitle "it doesn't have to taste like grass."  I have always steered away from green drinks, suspecting them of tasting like V-8 or worse.  Plus I hate kale (I know, I'm a disgrace to vegetarians), and it's this "super (nasty) green" that so many green drinks are made with.

I had some arugula from my garden that needed to be used, so I tossed that in for my greens.  Added to them blueberries, bananas, and mandarin oranges, with a splash of almond milk. The blueberries ended up being the primary color, so its more a purple drink than a green one. Just what I needed to curb my ice cream craving!

I have to say that I can taste the arugula, but it is a pretty spicy variety.  Next time I'll use something milder like spinach, and it will probably be just right.  All the same, the overall flavor is so good (and I was sooo hungry) that I started wolfing it down straight from the blender.  Luckily I realized that I needed to photograph it before I finished it off!

It was a hard choice between Sourdough French Toast and Banana Pancakes.  However, I had a rather stale bit of sourdough bread that I made last week left over, and so the French toast won. I still had some blueberry syrup from my weekend brunch, which was perfect on top.

As much as the recipes in this cookbook excite me, I was a bit dubious about this one.  Vegan French toast?  The whole point of French toast is the milk-and-egg batter!  Turns out I was wrong, and Thug Kitchen was right again.
Posted by Meredith Cherry on February 04, 2015