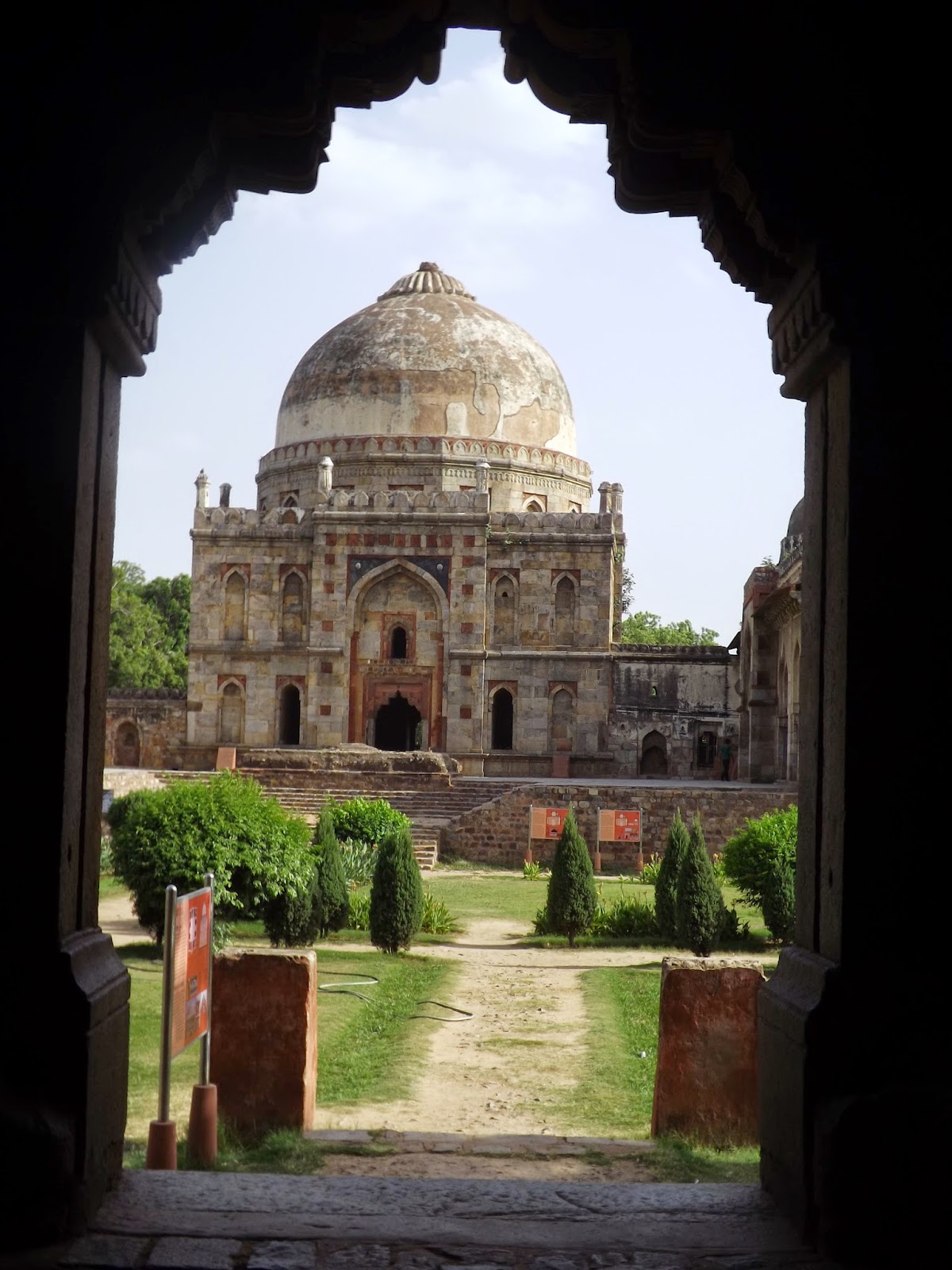 Wow.  I love it here! My first full day here has far exceeded my expectations.


The plane rides were fine, but the connections were not on time, so I missed the flight out of New York for Delhi and had to wait a whole extra 24 hours.  While the airlines did in the end accommodate me well for my delay, they were extremely frustrating to deal with.  But, once I got on the final non-stop to Delhi, it was smooth sailing… err, flying.  I wish all plane rides were that nice! Large comfortable seats (the size they used to be!), meals and snacks included (like they used to be!), pillows and blankets for everyone, and free on demand movies.


When I landed here in Delhi, I couldn’t find my bag at first.  As I was practicing my meditative breathing, they discovered it had been sent the night before on the flight I had not been able to get on in time.  Weird much? Since it was there before me, the baggage claim guy said it would take an extra hour with customs, but if I signed a paper it would be done in 10 and I could skip customs. Hmmm… guess which one I picked!


The hotel had a driver already there to pick me up in a nice air conditioned car (boy is it hot here!), and I got my first taste of Indian driving.  Yikes.  Although I have to say it’s not as scary as I thought it would be.  I tried putting my foot through the floor (screaming in my head “Brake! Brake!”), but after that I made myself relax and enjoy the ride.  It is truly a miracle that there are not more accidents.  I also hired a driver to take me around sightseeing today, and have not yet seen a collision.


The drivers here basically ignore the lane dividers, and just drive wherever they fit (and some places it looks like they shouldn’t).  They tailgate worse than I have ever seen anywhere, leaving mere inches normally, centimeters at times.  At high speeds. While weaving in and out of the other vehicles, including cars, rickshaws, bicycle taxis, buses, delivery trucks, pedestrians, and even a camel and rider.  I also took a bike taxi, and he followed the same road rules (or lack thereof) as the cars.  At one point we passed a public park called “Children’s Driving Lesson Park” where they had signs and play area designed to teach kids how to be safer drivers… I had to wonder whether they were teaching them that 4 lanes could be 7 if you used the space between lanes and the shoulders too. 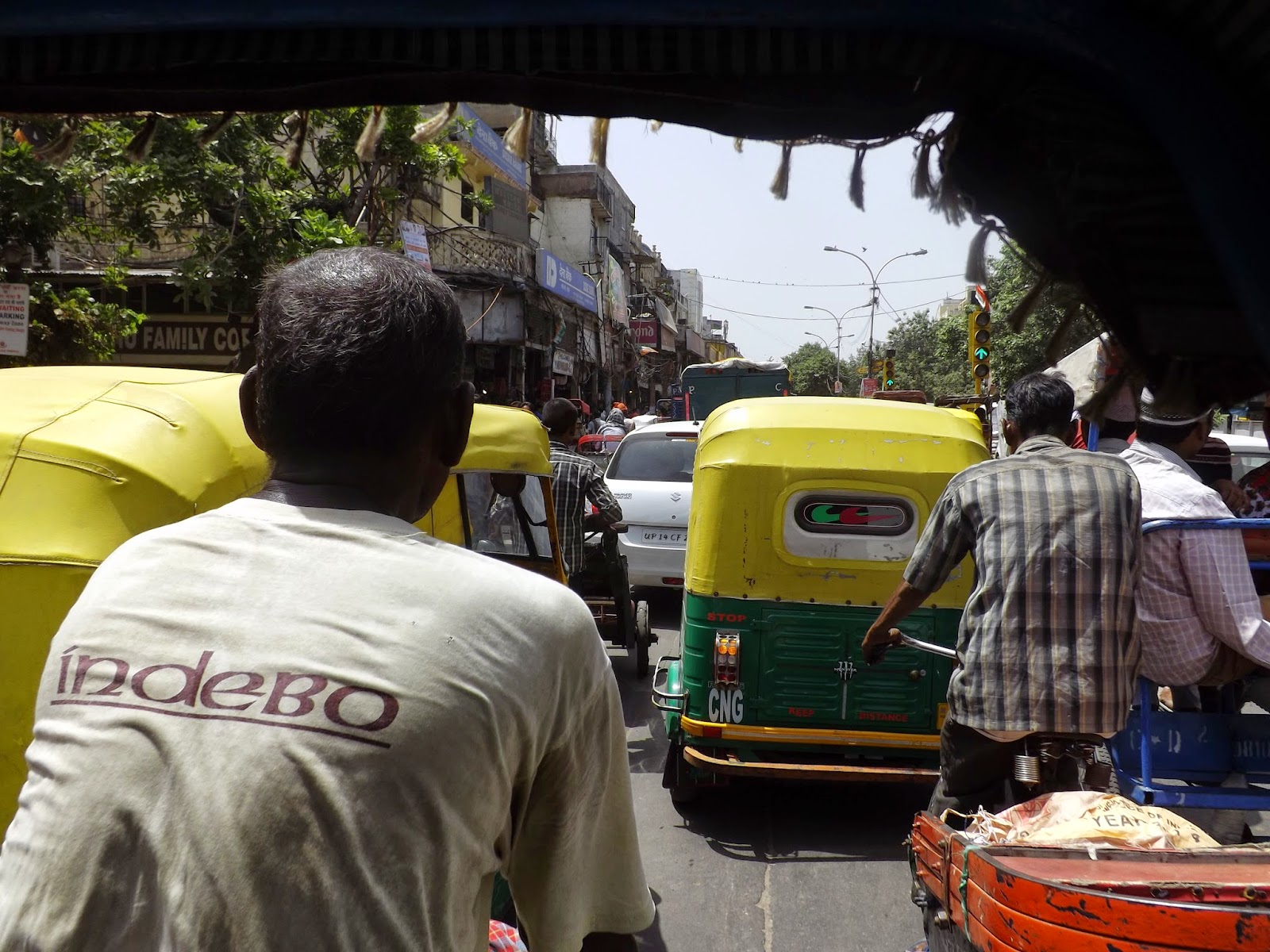 Once I began to trust the drivers, though, I actually enjoyed it.  Even the constant honking has a musical quality about it.  The driver seemed to have a honk-code: several short honks when preparing to squeeze past someone, one longer honk to encourage someone to move faster, several other combos for other situations, and at night synchronized these with flashing his brights at the other drivers.


This morning at breakfast I met another American who was in Delhi for the day, and we decided to go sightseeing together.  The hotelier suggested the top sights and order of seeing them most efficiently, which was quite helpful.  It was nice touring with someone else for the first day, too, so we could share the cost of the transportation, help each other not get lost, etc.

We started out in Old Delhi, or Shahjanabad (named for Shah Janan – creative name for his city, no?).  First stop by autorickshaw was the Red Fort (yes, its red and a fort). Built beginning in the 1600s as the royal residence, it is HUGE, covering over 1 ¼ square miles (that’s bigger than a standard American city block). 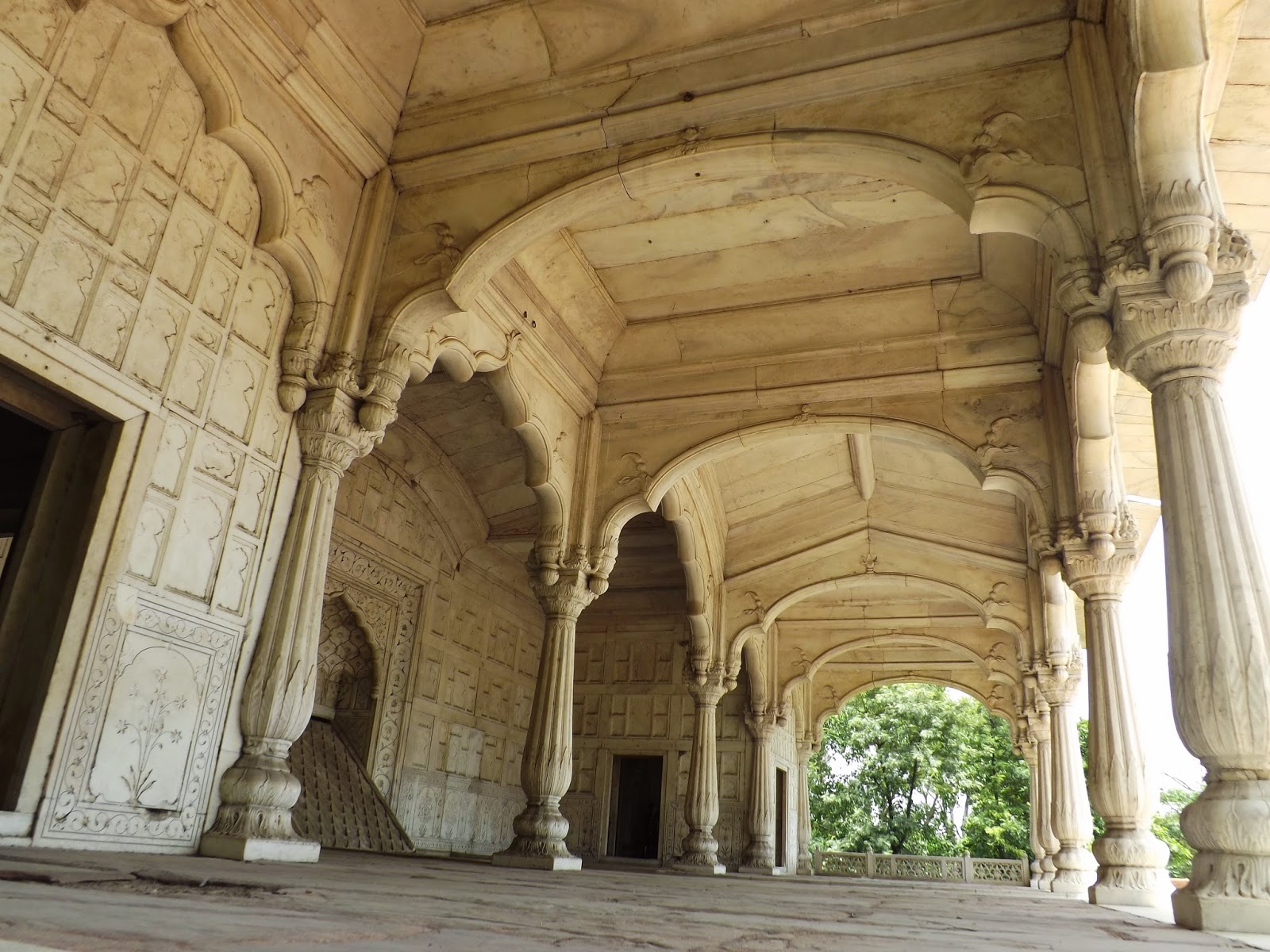 The whole thing is surrounded by gigantic red sandstone walls, and the buildings inside are ornate and typically solid marble.  There used to be fountains and pools running all over the complex, but these are now dry. 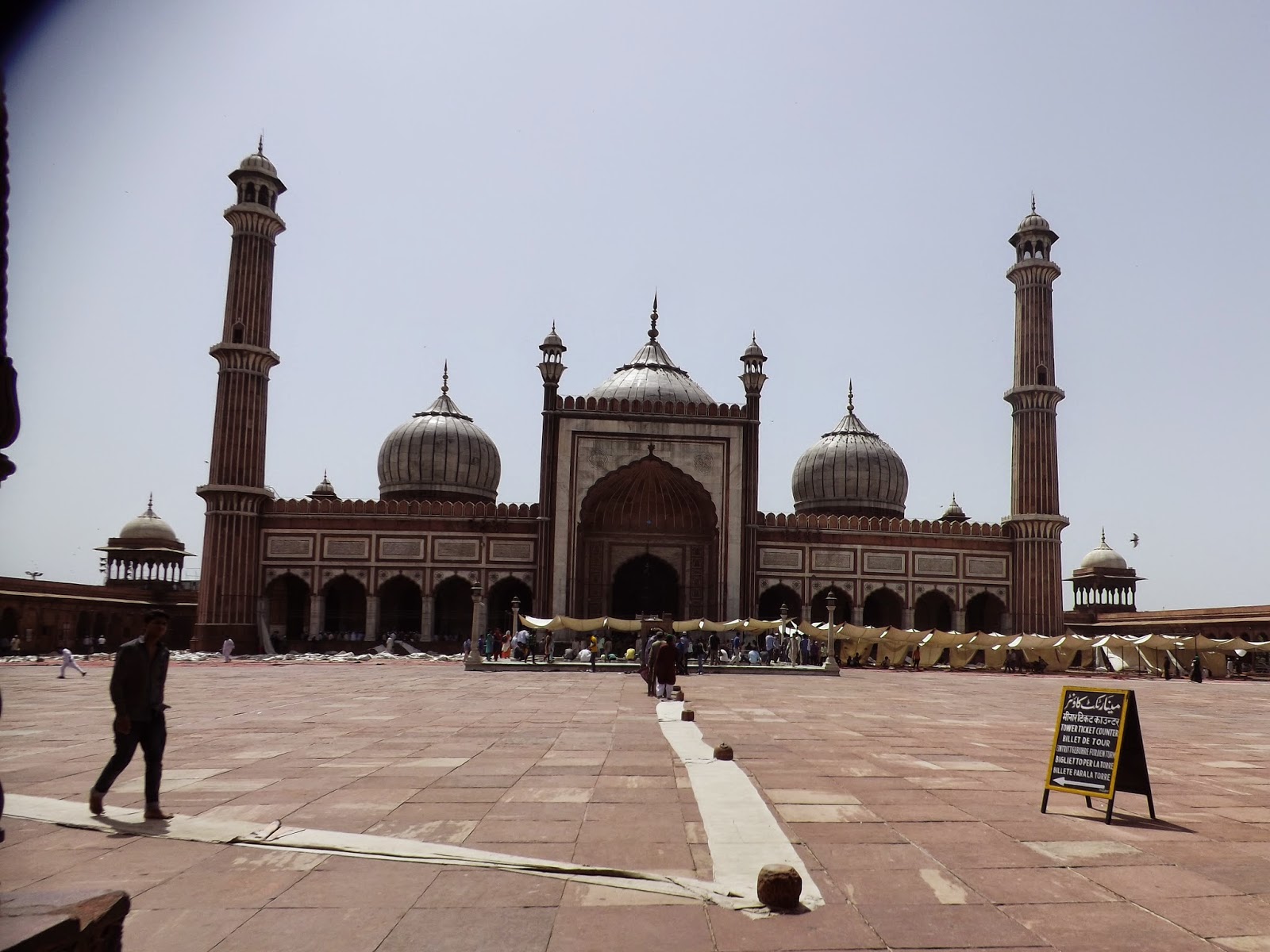 We then proceeded by bike rickshaw through the incredibly narrow and congested streets of Old Delhi to the mosque Jama Masjid.  Built in 1656 to 1662, it is the largest in Asia.  Being a holy place of worship, everyone had to remove their shoes before entering, and GEEZ those flagstones were HOT on my bare feet! Luckily they had relatively less hot carpeted walkways running all over the place, but sometimes a section was missing so we had to power across to the next one. 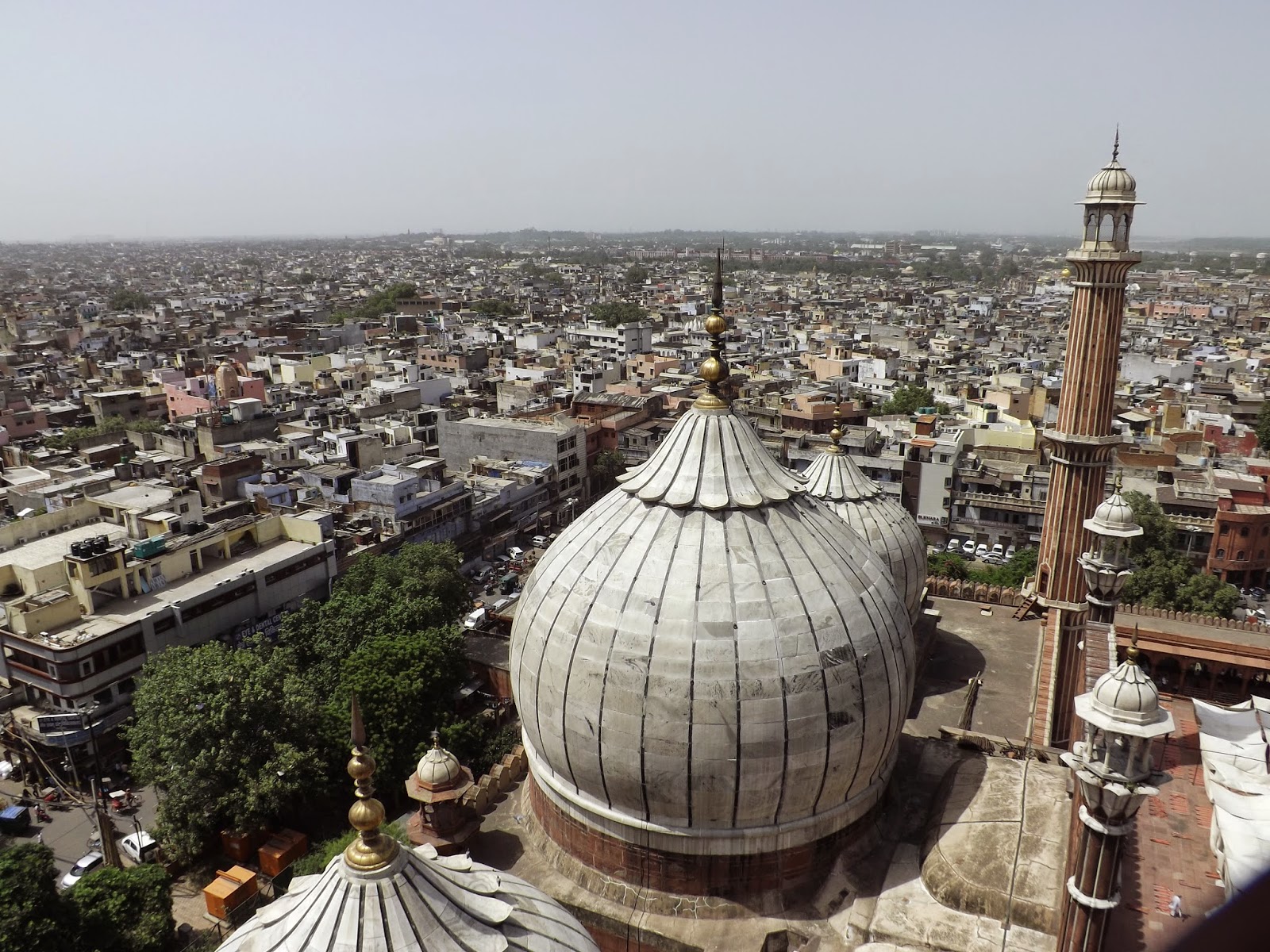 The best part of visiting this mosque was walking up to the top of one of the minarets.  The incredibly steep and narrow spiral staircase was at least nice and cool on my bare feet.  The view from the top was worth the effort. 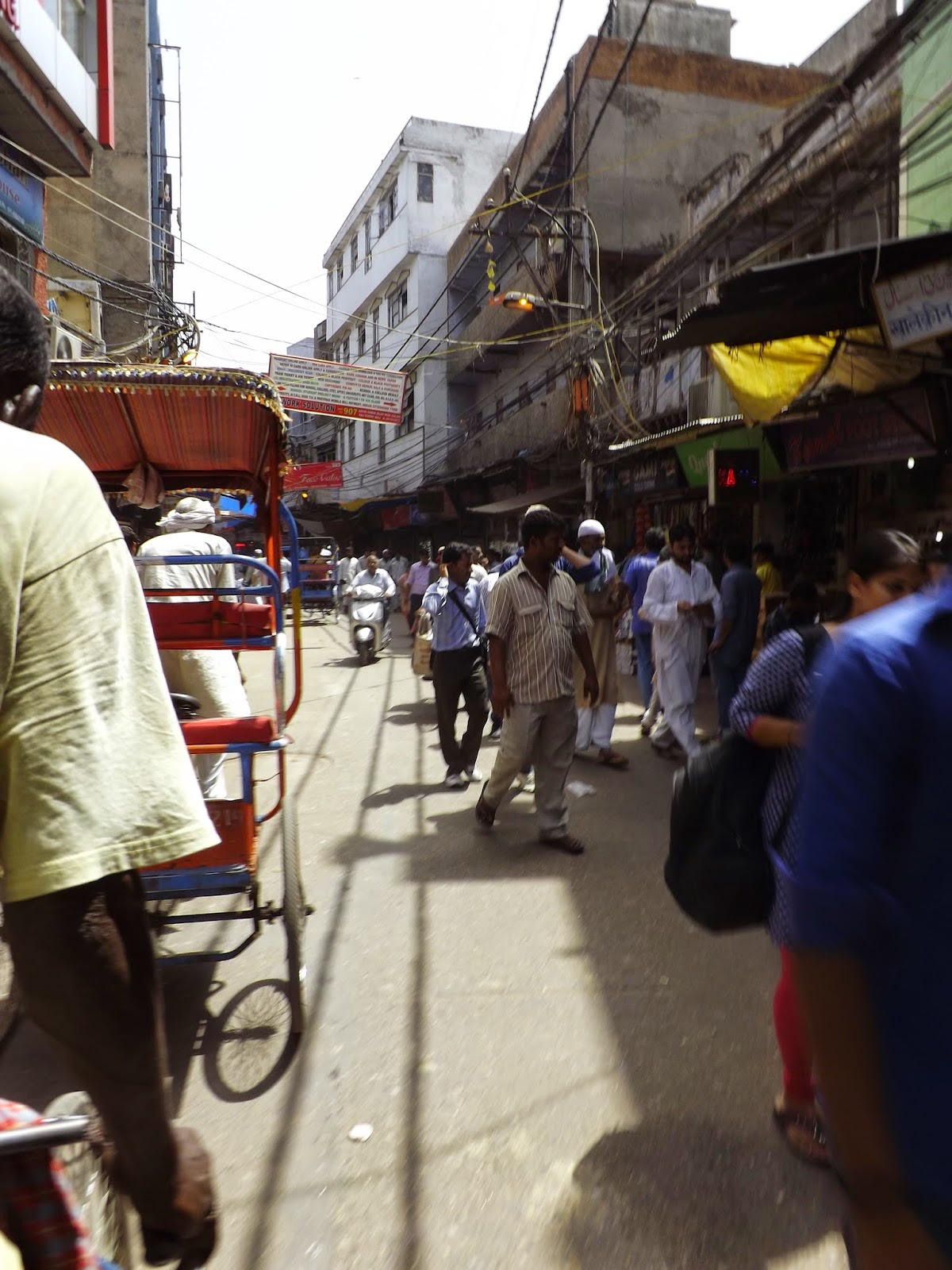 The best part of Old Delhi was the rickshaw in between things.  I am sure the driver was taking the long way so he would get paid more, but I did not mind, because it was fascinating seeing all the people and shops.  Most of Old Delhi is just a mass of shopping stalls selling everything you could think of, from bolts for your construction to bolts of fabrics for saris. Stalls upon stalls selling only bangle bracelets in every color imaginable.  The most beautiful saris I have ever seen outside of a Bollywood film.  Food vendors galore, whether you wanted live chickens or fresh fruit, or something ready to eat.  And I didn’t buy a single thing! 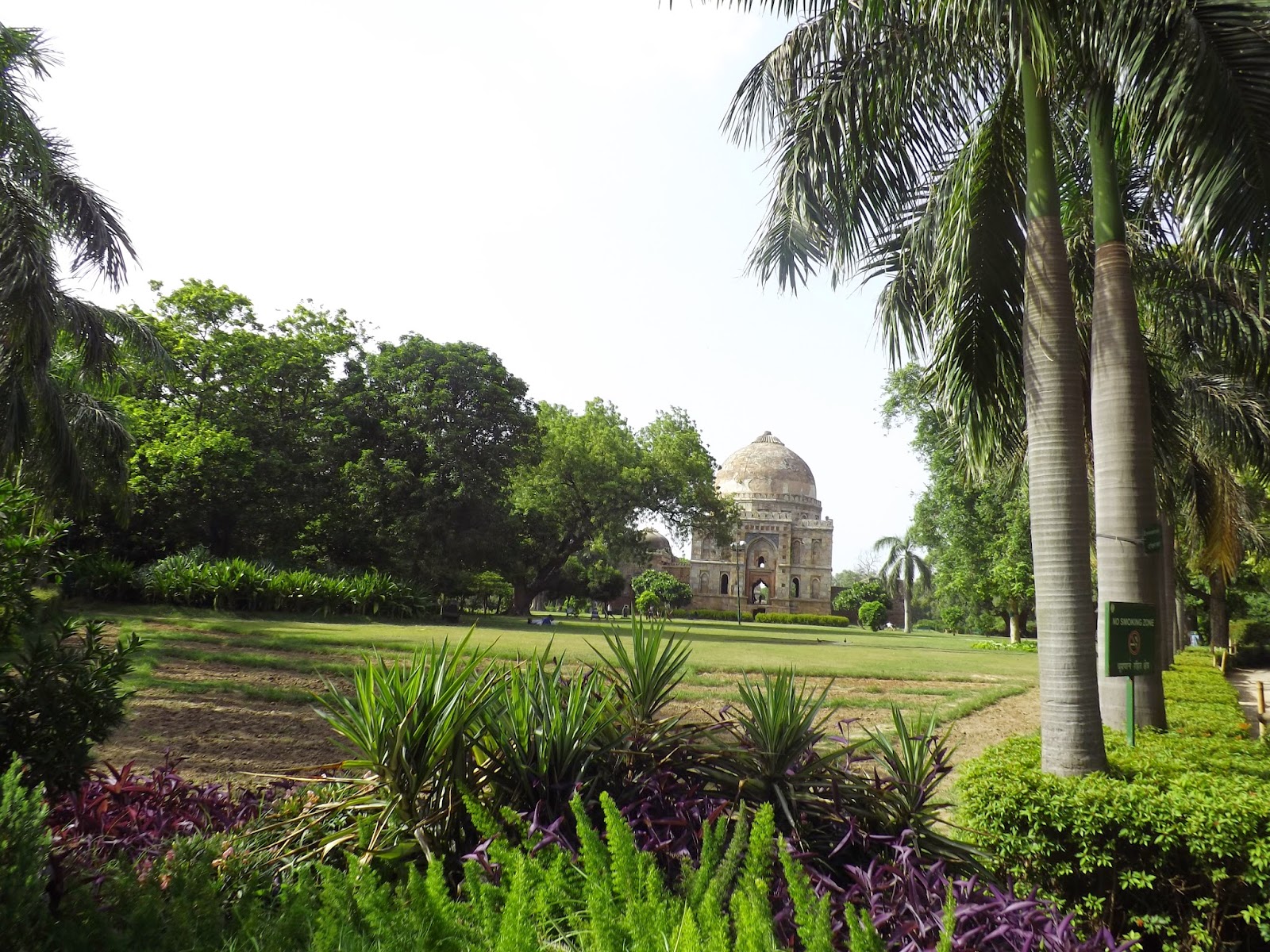 After the bustle and noise of Old Delhi, we went to Lodi Park a bit further south.  This is a public park that has manicured grounds around the beautiful 15th century tombs of the Lodi and Sayyid dynasties.  I loved that the trees were often labelled with their species names, and there were informative signs about the species of birds that lived there, and about the history of the tombs.  It was so peaceful and relaxing to walk around and enjoy the sunshine.


Did I mention the food? India is vegetarian paradise.  There are so many delicious things to eat here! The hotel makes awesome lassis, and I have tried more things in the last day than I can list here.  And I've not gotten an upset stomach yet! (or jet lag either!)
Posted by Meredith Cherry on August 22, 2014