Adventures in India on and off the beaten track 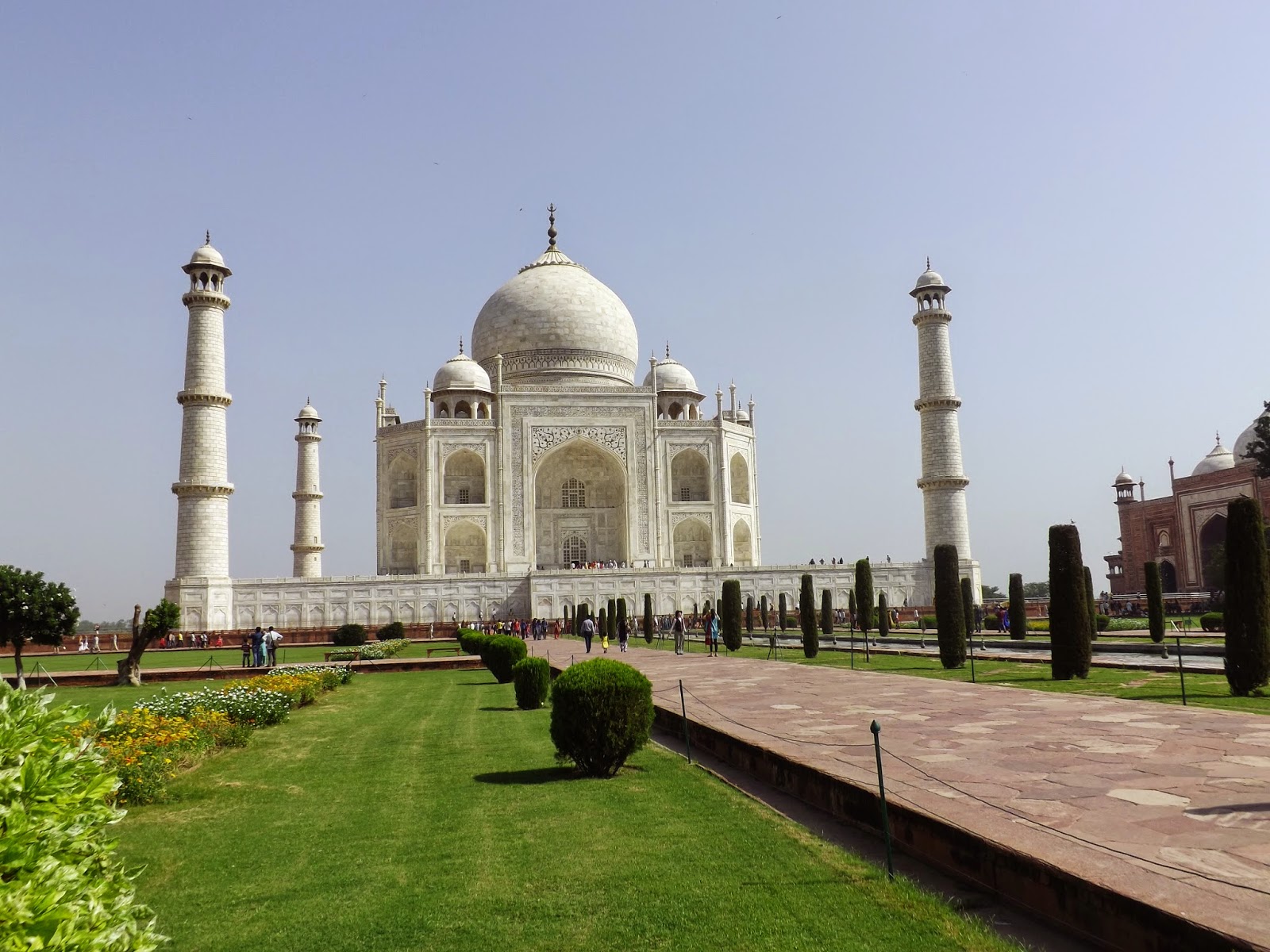 My second day in India started bright and early – which made no difference to me as I am still getting adjusted to the new time zone anyway.  I had to catch a train with my fellow American tourist to Agra, city of the Taj Mahal.


After some confusion in getting on the right train, we arrived in Agra and hired a guide and car.  Normally I don’t like hiring guides, but this one was worth every rupee.  He got us around what would have otherwise been long waits, and he was a wealth of information on history and architecture.  He also fancied himself a photographer, regularly pointing out the best spots to stand for photos, and for his favorite spots would ask if he could take “a very good photo” with my camera.  There is actually more to see in Agra than the Taj, as it was the capital city of the Mughal dynasty’s empire for several generations. 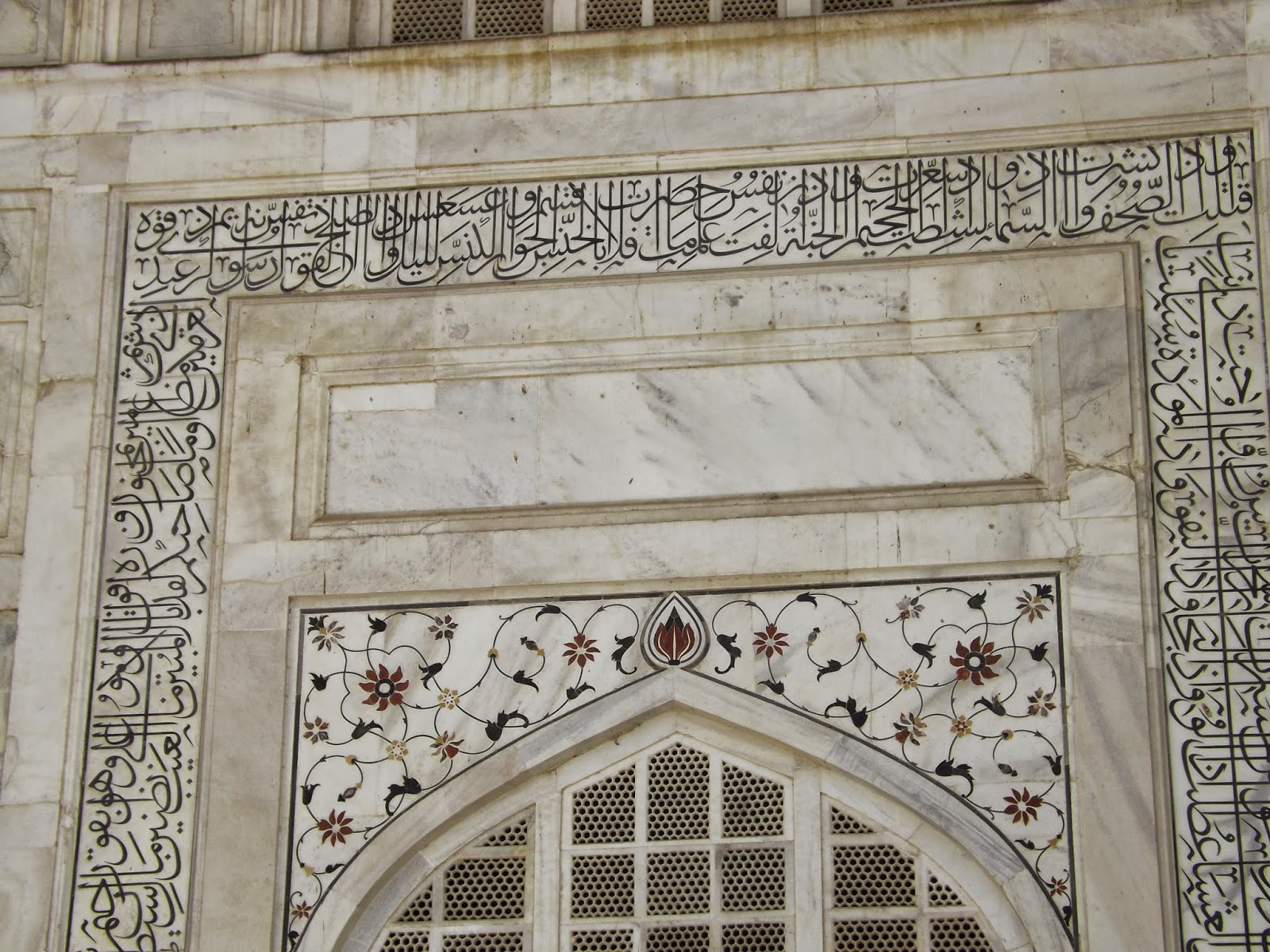 The Taj is amazing.  I wasn’t sure how much was just hype, one of those things you have to see because everyone else does.  It’s no tourist trap.  It is huge and beautiful, and the artistry is amazing. Every little colored detail on the monument that looks like paint is actually inlaid semi-precious stones.  The whole façade is marble, and quite a lot of it is intricately carved.  The whole thing is perfectly symmetrical, even the buildings on either side match (on one side is a mosque, the other side was just made to look like a mosque).


After we saw the Taj, the guide took us to see “the descendants of the Taj builders” who still do the stone inlays using the ancient techniques.  Of course it was intended to get us to buy something, and no doubt the guide gets commission on sales, but even still I am glad he took us there because it was very interesting watching them work the marble and stones into pieces of art. 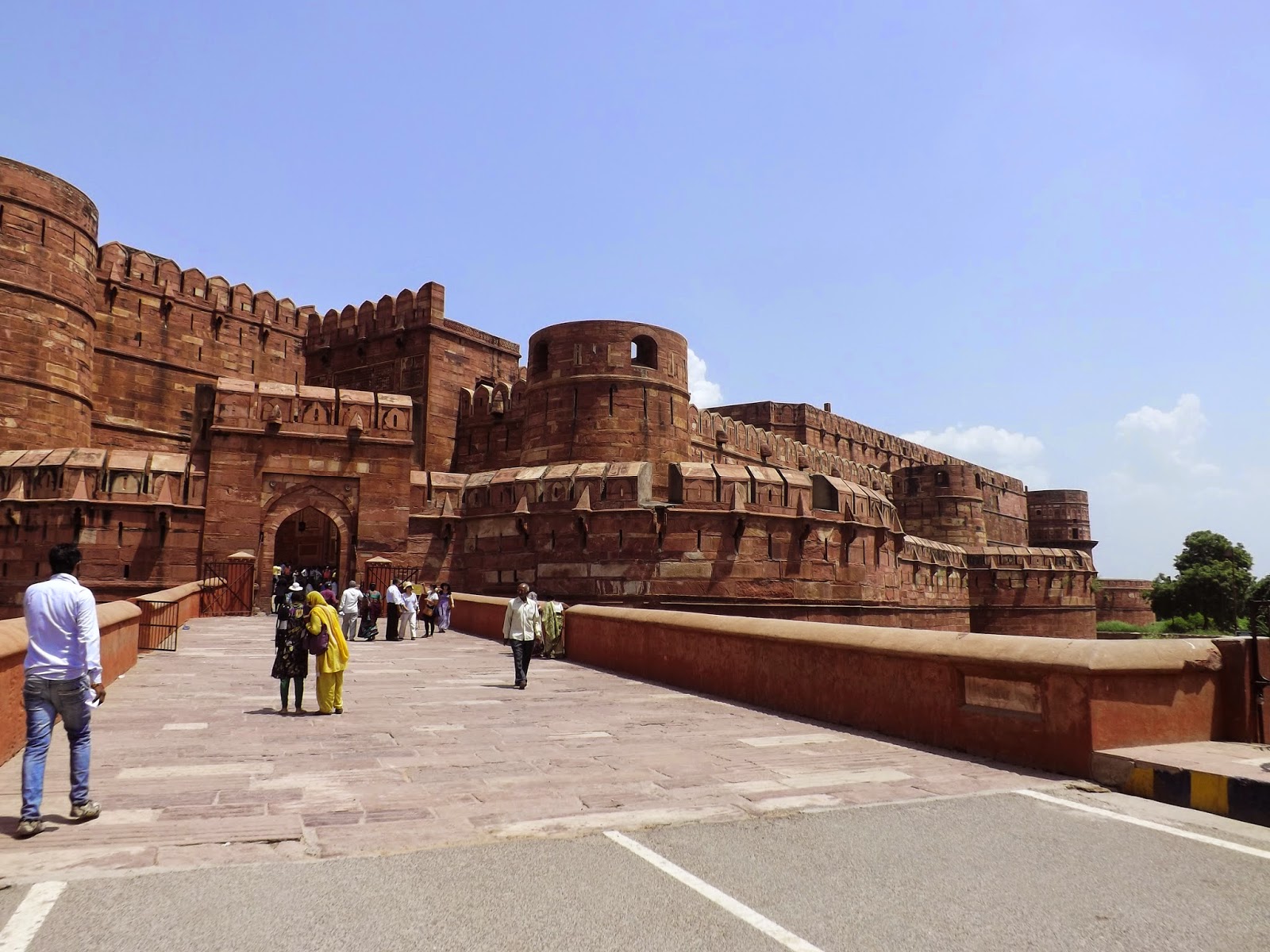 We then went to see Agra Fort, which was built even before the Red Fort in Delhi.  Agra Fort is way more impressive than Red Fort both in scale and elaborateness. The Fort was built several generations before the Taj, and the Shah that built the Taj places that memorial in view of his quarters in the Fort.  The Fort had been expanded with every generation, and it was interesting to see the development of popular style as the additions were made.  The best example is the movement from red sandstone when it was first built to white marble by the time of the Taj, but also some of the decorative styles changed over time as well. 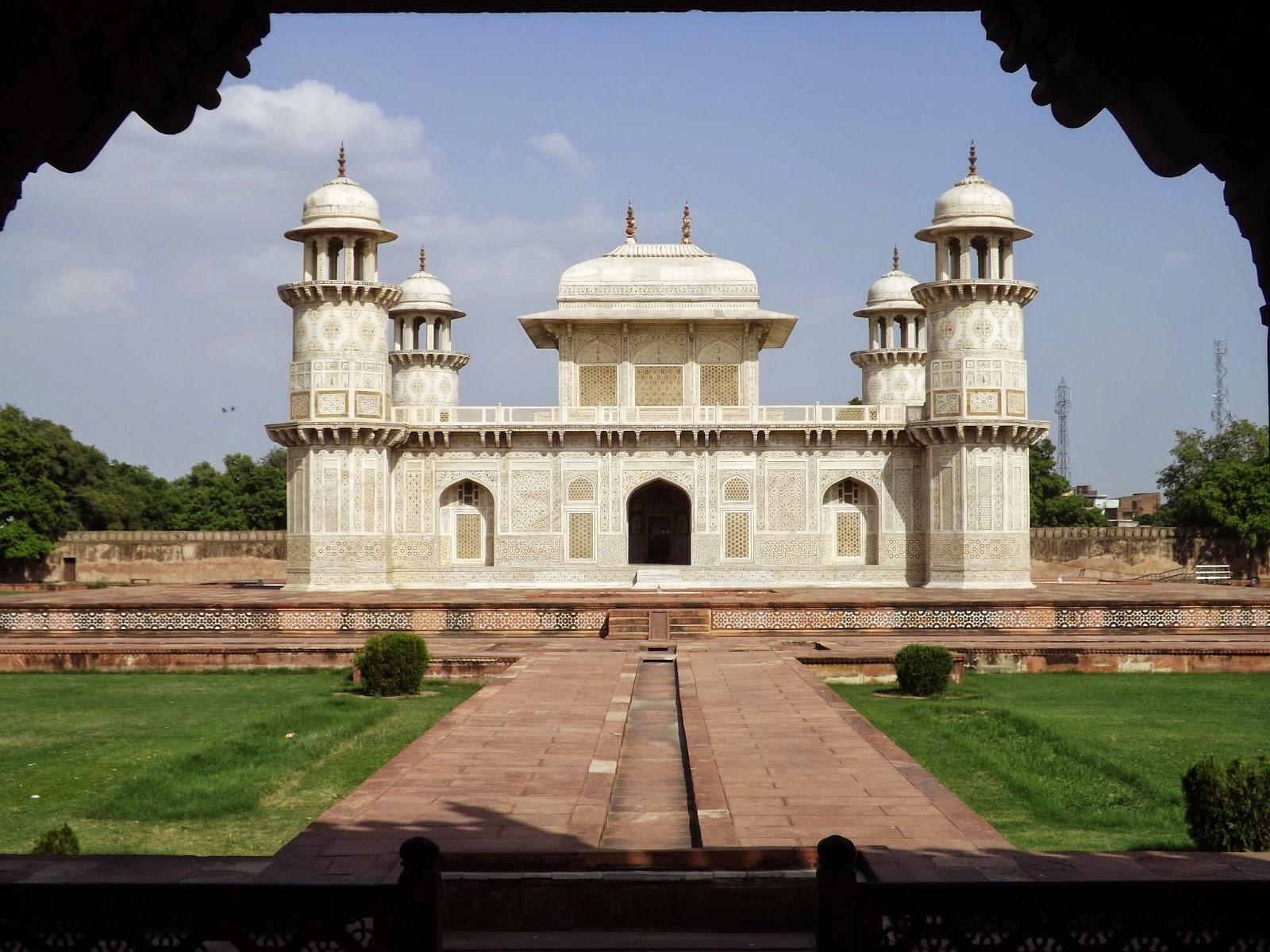 Finally we went to the “mini-Taj,” or Itmad-ud-Daulah’s Tomb, which was built by the generation prior to the building of the Taj.  It really does resemble the Taj but on a much smaller scale!  However there are many differences in style here as well, such as the marble being mostly painted instead of inlaid with stones.  It was the burial place of the Queen’s parents (the Shah’s in-laws), and their tombstones were carved out of solid rock of a color that looked like finely polished wood.


After a good long night’s rest, I was ready for another big day of traveling and sightseeing, all on my own.  I got on the right train with no problems and travelled several hours south to Bhopal.  When I arrived in Bhopal I hired a tuktuk (also called an autorickshaw, essentially a 3 wheeled motorbike with a large backseat to accommodate passengers) to take me to my intended destination of Sanchi.  According to my guidebook, Sanchi was 2+ hours away, but my tuktuk driver covered it in just 90 minutes.  It was not unlike Mr. Toad’s Wild Ride at Disneyland, but faster and with more cows. 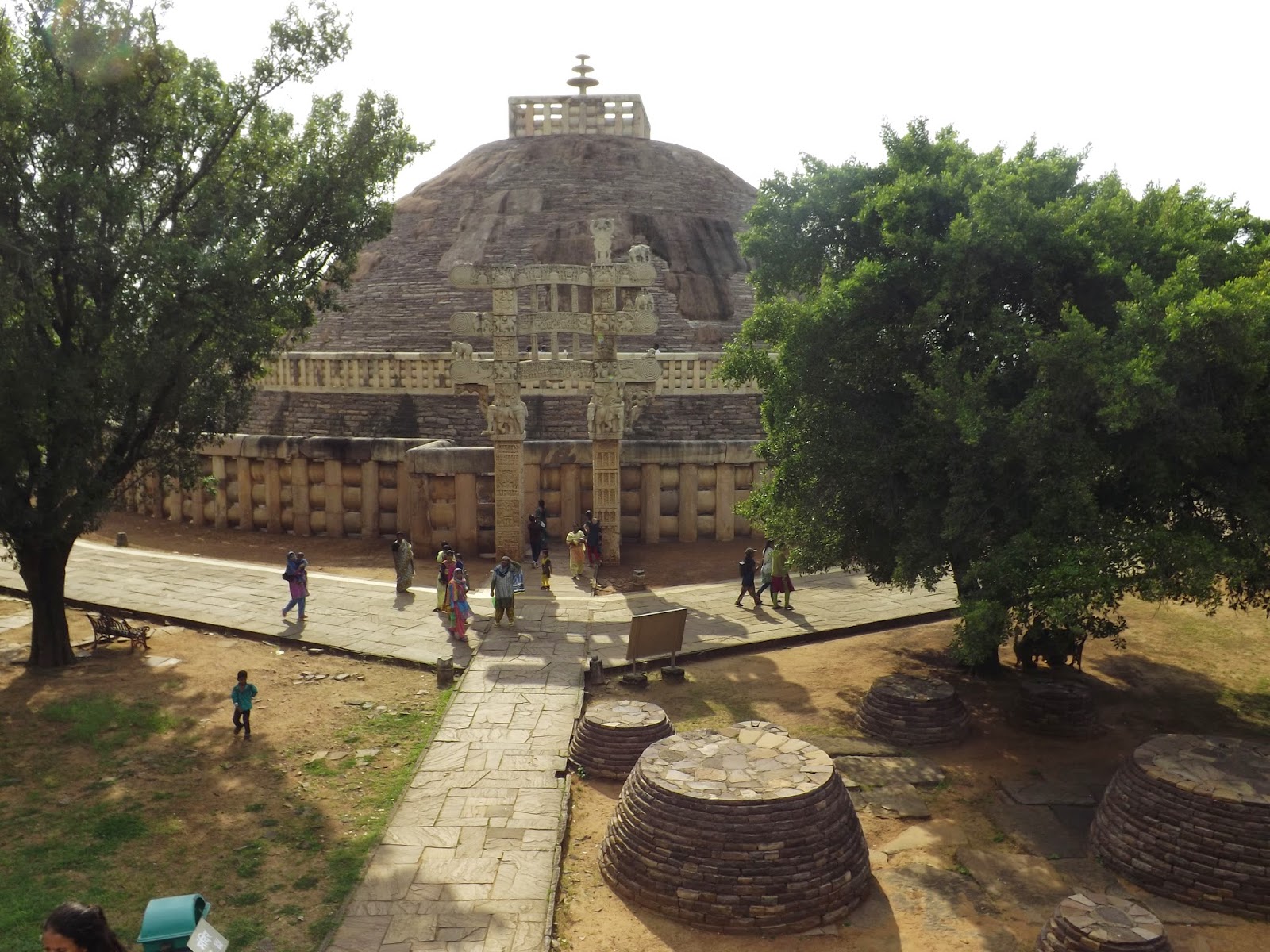 Sanchi is the site of the best preserved ancient Buddhist stupa in India.  A stupa is a virtually solid mass of stones that have Buddhist relics buried at the center. The most venerated, of course, hold relics of the Buddha, but others contain relics of monks.  Built in the 3rd century by King Ashoka, this stupa is said to contain relics of the Buddha.   The site has survived wars and neglect with very little damage. 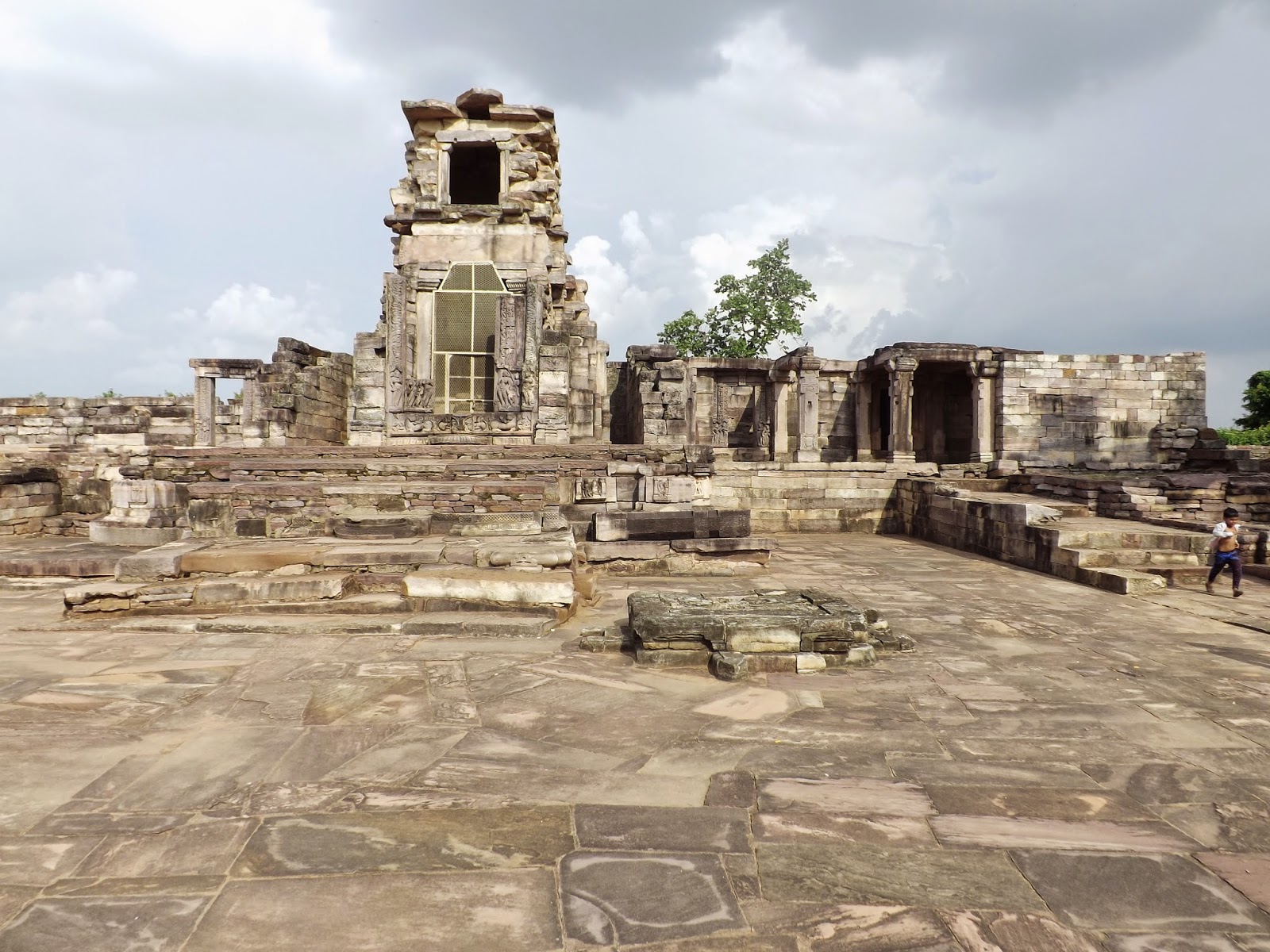 It is also surrounded by a large monastic complex, although these buildings are all in ruins.  The monk’s cells were very similar in size and quality to those of the monks at the California missions.  It also had some structures off to the side that looked to me like Greek temples (complete with Doric columns!).


As Sanchi is well of the beaten track for white tourists such as myself, I found myself for the first (but I am sure not the last) time to be the object of curiosity.  Starting with the drive, when motorbike passengers would crane their heads back around to look at me, or pull up next to the driver to ask about me (although the conversation was in Hindi, I caught the word “American” so I know that they were talking about me). Then at the stupa, where I was the only non-Indian tourist. It was amusing to see the little children run up to have a closer look at me, and one group of tourists asked me to be in their group photo.  Weird, but I guess I was as entertaining as the world heritage site itself.


I could not get a train ticket out of Bhopal for another day, so I spent the day resting and getting a few small errands done.  Namely, walking across a busy street without getting run over so that I could visit an internet café.  Yikes.  I also saw what amounts to an Indian farmers market, with big old fashioned scales to weigh out purchases, and the ever present wild cattle helping themselves to piles of cucumbers.


I spent several hours of studying my Hindi phrasebook (since I’ve gone out of the tourist zone, it has become more challenging to communicate).  Thus I managed to ask the restaurant waiter “what is this?” when he served me some odd tasting drink that came with my thali dinner spread.  Unfortunately, I my newfound knowledge was not extensive enough to understand his answer!
Posted by Meredith Cherry on August 31, 2014