A Quick Ride Through Arizona 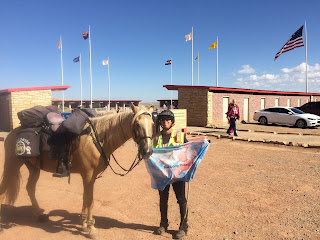 Here we are in Arizona, our 10th state!

We travelled to the Arizona state line at Four Corners National Monument.  Although I was not allowed to ride him onto the monument - and thus could not put a hoof in each state at once - the park service allowed me to bring him into the park and ride him around the perimeter of the buildings.

It took just under four minutes to ride through Arizona, New Mexico, Colorado and Utah.  This was the first recorded instance of a long rider visiting the monument, and thus the fastest four-state travel time by horse.  Way to set a record, Apollo!