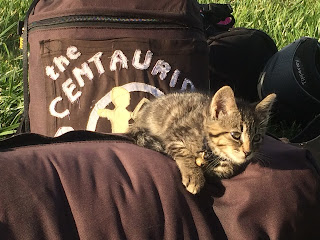 Apollo and I are excited to introduce our new travel companion, Hermes! 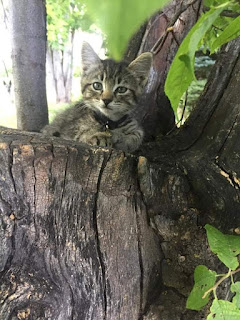 Hermes was named with the help of our Facebook fans, who were given a choice between that and Mercury (the Roman name for the same god).  Hermes is the name of the Greek god of (among other things) travelers, who was also the younger brother of the god Apollo.  As an infant, Hermes was mischievous and played a prank on his older brother. 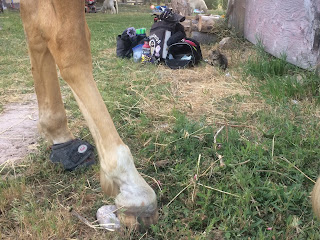 Hermes joined us in July after he adopted me in Burley, Idaho.  He was a tiny orphan stray, barely of weaning age.  I wasn't sure I could safely include a cat in the Centauride entourage, but after a week of shopping and testing, I had arranged a stable and comfortable method of carrying him. He enjoys watching the world go by and also napping as he sways along. 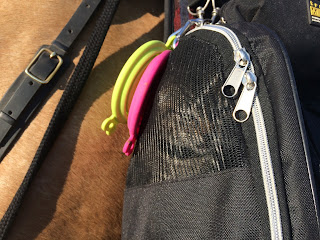 In time, I think he will also learn to sit atop the packs or on my shoulder while I ride. For now, he's practicing by riding on my shoulder or arm while I walk with Apollo. 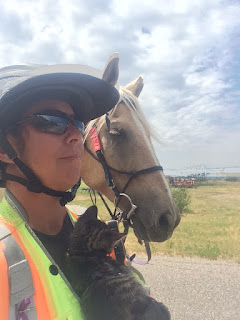 He has already gotten used to the routine of travel.  Nap while Apollo walks, then when the swaying stops it's time to get out and play! When Apollo grazes along the road, Hermes gets food and water breaks, and then spends the rest of the time chasing Apollo's lead rope or playing in the grass. 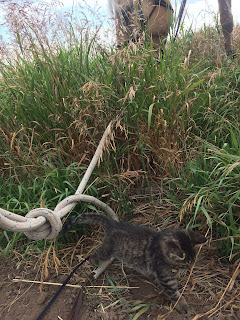 Then when it's time to unsaddle Apollo, it's also time for him to come out and meet his new friends for the day! In some places we stay, his new friends are kids who are thrilled to play with him for hours, and in other places, he tumbles with other kittens until they all need a nap. 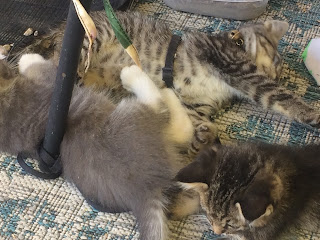 And though he doesn't know it, Hermes is the first cat in recorded history to go on a long ride! 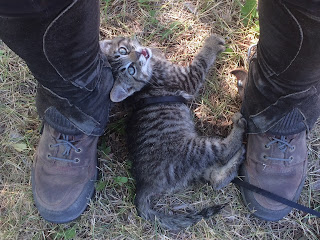