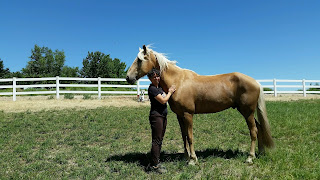 When I was horse shopping three years ago, I knew I wanted a big horse that would be capable of carrying both myself and my packs.  At 130 lbs, plus 70 lbs of gear and 25 lb of saddle and accessories, I needed a horse that was at least 1150 lbs to be able to comfortably support that weight day after day.

The moment I saw Apollo, I knew he would be able to handle the weight.  He towered over my 5'2" self.  He stands 15h3, which for you non-horsey people is 5'3" at the highest part of his shoulder.  When I have my boots on, my head just reaches the top of his shoulder, and if I stand on my toes I can see over his back.

I've never really given a second thought to riding tall horses, because most horses are tall compared to me.  It hurts just as much to fall off a 14h2 horse, especially when landing on pavement.  But Apollo is a little taller than the average saddle horse.  And I'd always ridden in an arena, or on trails with plenty of rocks and logs for mounting blocks.  Plus, I'd never had to load a tall horse with heavy packs (when I took Packing And Outfitting in college, there were bigger people to do that for me).

On the Centauride, there are rarely mounting blocks, rocks, logs, benches, picnic tables, retaining walls and good sized ditches when I want them.  In Star, Idaho I found this whole lot-full of great mounting rocks! 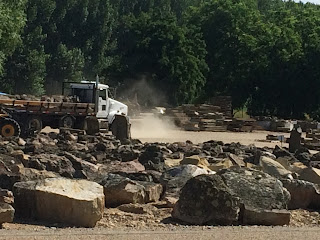 On the road, I have to mount up from the ground more often than not.  And I have to lift my saddle and my two 30 lb packs over my head every morning and night.

By the time I realized my error, I was months away from departure.  Since he's otherwise a great horse, I figured I would just make due.  And I have...

But with some funny results.  If I am photographed leading him on the other side from the cameraperson, it looks like he's taking himself for a walk. 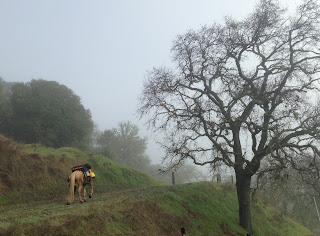 Every few weeks, I get stopped by some concerned neighbor who saw my horse walk past without a rider.  They hear the bells, look out the window, and (since I walk on the traffic-side of the road) only see Apollo.  Then they jump in the car and drive out to catch the horse, with a resulting conversation like this:

I'm glad that such people are concerned about Apollo, but it makes me chuckle every time.
Posted by Meredith Cherry on July 23, 2017