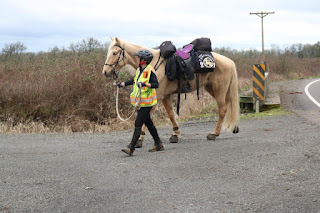 Remember when The Horse Whisperer was trending? Although I think "trending" was not yet a word then... Since that time, natural horsemanship has become mainstream.  Everyone wants to develop a partnership with their horse, where they can ride bridle-less like a Tolkien elf, send commands to their horse using their minds like a Jedi master, and have their horse adore them and follow them around like a Golden Retriever.

While there is nothing wrong with this goal, and this blog post is certainly not meant to speak against such training, there is one major aspect of this - and all kinds - of horse training that I've been ruminating on which, as a long rider, I've had to rethink...

Whispering to horses is one-sided.  Your words into their ears.

Now I'm not an expert trainer or rider by any stretch of the definition, but my own goal as a horsewoman is conversation.  To both be able to gently and effectively communicate my needs to Apollo, and he back to me.  This to me is a real partnership.

Yes, many training techniques require you listen to the horse to some degree.  Some more than others.  But to use Pat Parelli's lesson (very good in most situations) as an example to what I'm talking about, the usual approach to training is that when there is a problem "You're either asking the wrong question, or asking the question wrong."

I love this quote, because it puts the responsibility of communication on the person.  As it should be.  If it were up to horses, they'd be out in pasture not dealing with our antics at all! And would be perfectly content not doing sliding stops or piaffes, wearing a saddle, or what have you.

However, when you move away from the arena and start working with your horse to get from point A to point B all day, every day, there is a shift in communication.  In the above quote, as with both normal and natural training systems, the person asks or tells the horse what to do and the onus is on the horse to comply.  Natural systems are typically more likely to use commands and cues that are similar to the ways horses communicate (more "natural") and thus the horse will in theory be a more willing participant.

This makes sense in arena work, on your typical trail ride, in horse shows, and so forth, because you need your horse to do what you want, no questions asked.  You say jump, they jump - literally.  A refusal is either because the horseperson asked wrong, or because the horse is misbehaving and needs to be corrected, better trained, or perhaps vet inspected (if the refusal is due to pain for example).

But in these situations, no matter how much the horse loves their rider, or thinks of them as herd boss, or otherwise has a good "partnership," the mindset is to get the horse to follow commands and not to communicate back about their thoughts and feelings on the jump course, trail, lunging, etc. 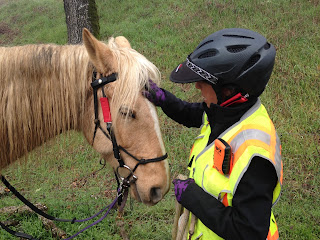 Now, though, I see it differently.  Now I spend all day in conversation with him, not talking to him.  I spend most of my time paying attention to his eyes, posture, breathing, ears, and other signs of what he is thinking and feeling in response to me and to the environment.  If he refuses to go somewhere, or stops suddenly, or otherwise doesn't do exactly what I had intended, I don't assume it's me asking wrong or him misbehaving.  More often than not, it is him trying to tell me something.  And now we understand each other better to communicate these things.

He gets a say in when it is break time - he knows better than me when he is tired or hungry, and we've established an understanding that he can ask to graze or drink or simply stop and rest.  Since he enjoys walking and accepts his job is to go forward (and knows there is grain and a good rest at the end), he is good at regulating himself to only take breaks when he actually needs them, and will not dawdle along the trail all day. And by "ask" to graze, I mean he lets me know with a look and a change of pace that he would like some tasty looking patch of grass, and waits for me to say okay first.

If I am riding, he will tell me when he would appreciate me walking.  If I am walking, he will let me know (if I ask) whether he is comfortable carrying me, or if he would like me to walk a little longer.  This is not a "refusal" as I would have seen it before, but an honest conversation we have about how he is feeling so he stays strong and healthy.

When a scary truck goes by, or the weather is atrocious, or the day's ride is long, he will tell me that he is worried, wet, or tired.  And I will listen, and help him be brave, and get him safely to the night's stop.