For those of you who ever said during math class "when will I ever use this?"... 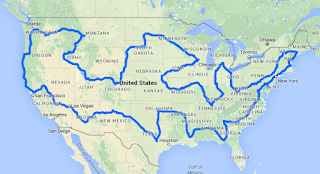 Deciding that the Centauride would be 14,000 miles and take almost 4 years was not a random decision, but rather a complex real world math problem.  It sounded like one of those awful story problems from school:

If Person A (that's me) wanted to ride their horse (that's Apollo) to 48 states in the least amount of miles and time, using the safest route possible and not riding in the snow, how many miles would they travel and how many years would it take?

Here's how I came to my answer:

Step 2 - For each "capital to capital" section of the map, I analyzed the most likely roads, paths and trails to travel, and mapped these on Google Maps.

Step 3 - I also kept a detailed spreadsheet of the mileage for each section.  This gave me the total mileage of the route.

On a typical day, I can expect to travel 20 miles.  Mountainous terrain will be less, easy terrain could be more.  Where I am able to stop for the night will also add or subtract a few miles.  However this is a reasonable estimate based on historical data from other long rides and the old guides of the U.S. Calvary.

In a typical week, I can expect to travel 5 out of 7 days.  The other two days will be planned for resting.

Thus I can expect to travel 100 miles per week.  This calculation was added to the spreadsheet to figure out the total days and the calendar of where I can expect to be when.

Step 5 - Since I do not plan on riding during the winters when I am in northern states, I then adjusted the calendar to compensate for "winter breaks."  The timing of these are based on regional data for first and last hard frosts.   This gave me the ride schedule and total expected years.

I also did another estimate and found out that it did not make sense to ride more miles over a route that would take me south for winters and north for summers.

For the full anticipated schedule, click here!
Posted by Meredith Cherry on May 26, 2016