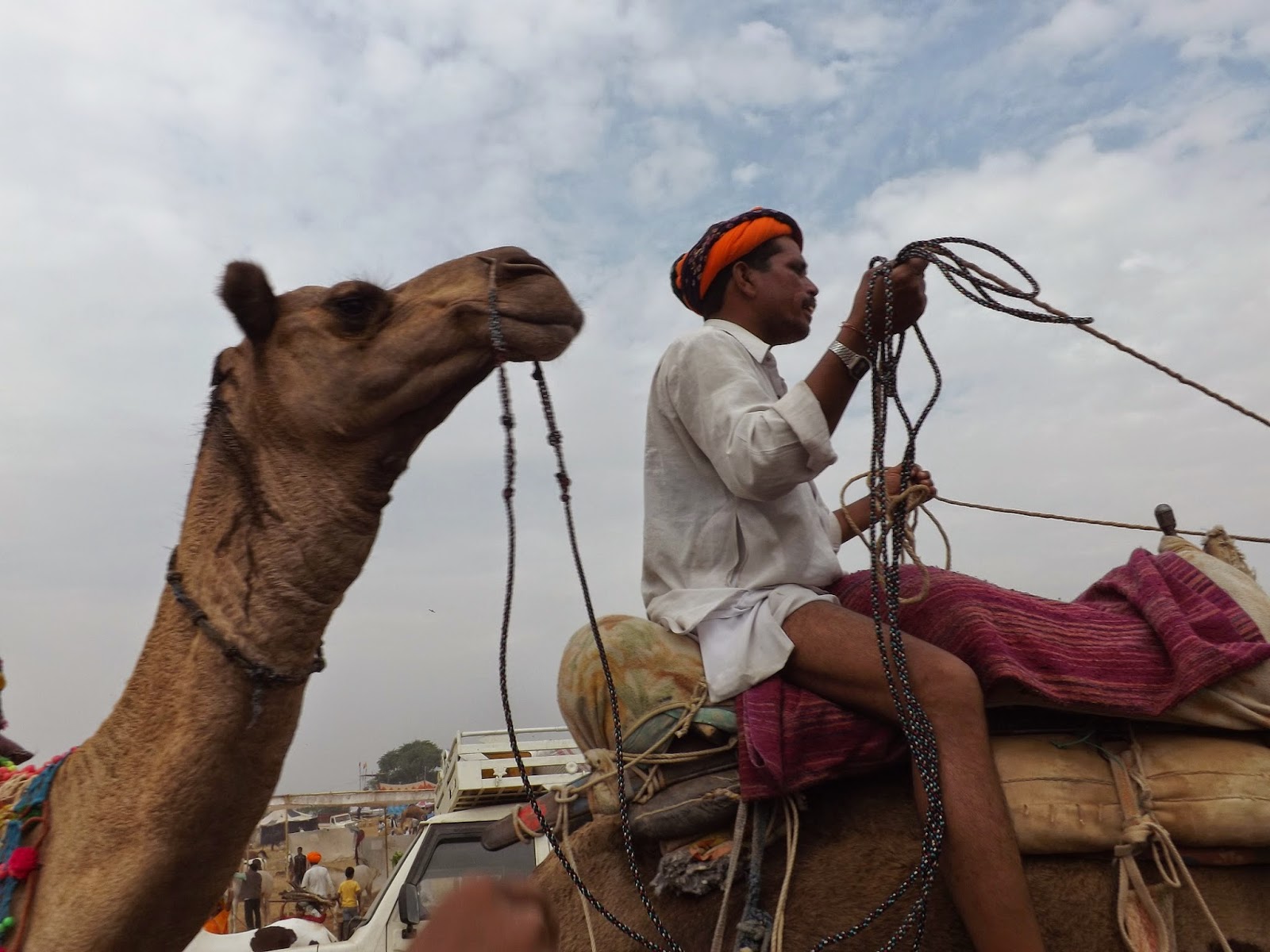 Not only are the Dundlod stables known for their Marwari horses, anyone is able to come ride these horses on a “horse safari” through Rajasthan.  Bonnie generously allowed me to come along as a volunteer for several of the safaris, part of which I was able to ride, and part of which I accompanied in their jeep.  The week and a half that I spent on safaris was simply amazing, and this humble blog cannot describe the experience as well as it deserves… 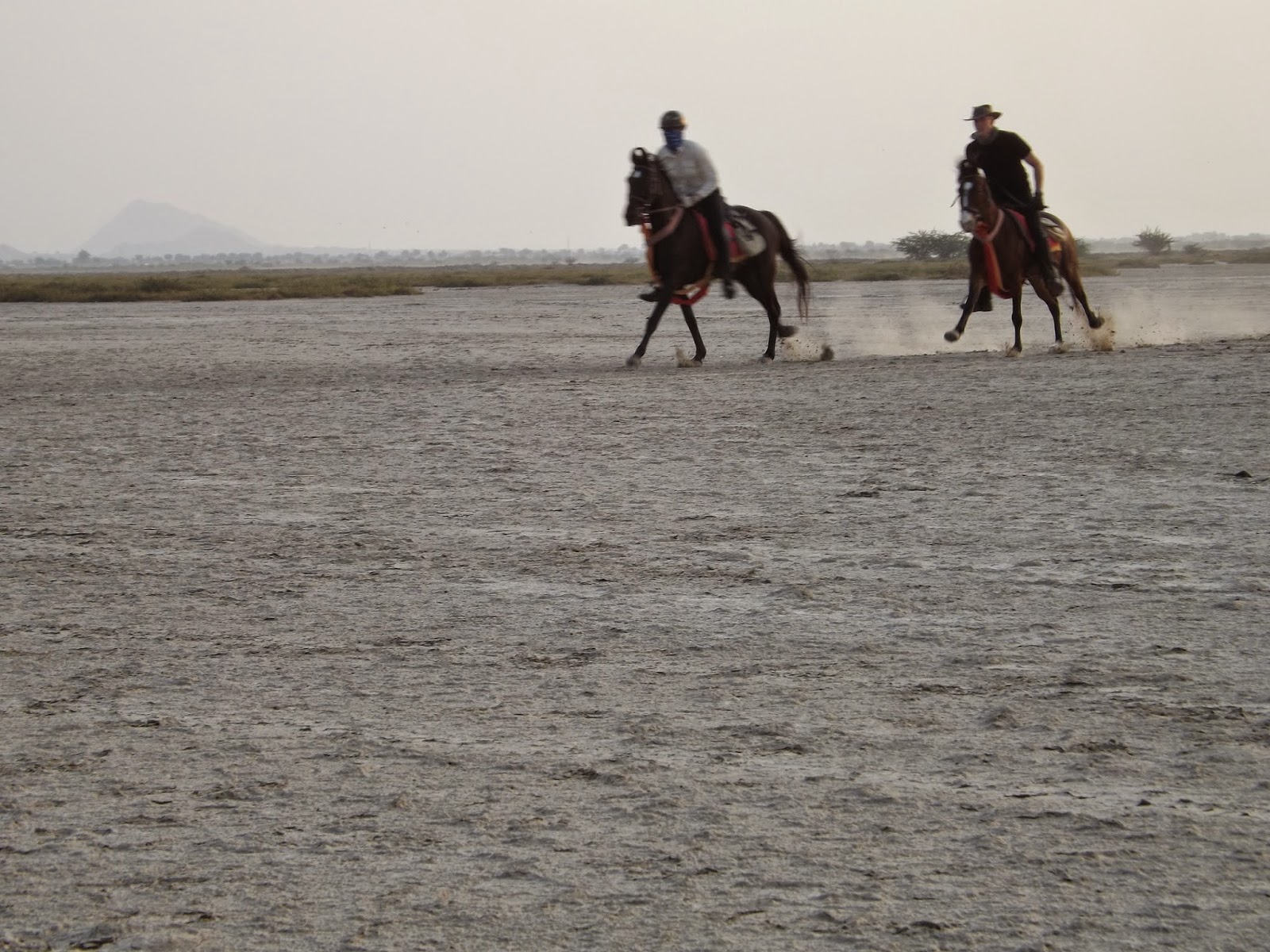 These safaris are not your standard trail ride.  They involve riding over five hours per day to cover 15 to 20 miles, and repeating this over 6 ½ days.  Typically the ride involves a fair bit of faster speeds; I had actually never previously galloped as fast or cantered as far as I did during a few of the days here. Unlike most guest ranches, the rides were not mindless nose-to-tail; the Marwari are too spirited for plodding! These riding holidays are designed for experienced riders who are comfortable sitting in the saddle for long stretches, but one safari I accompanied was modified to accommodate a family of novices including an eight year old who had never ridden before. 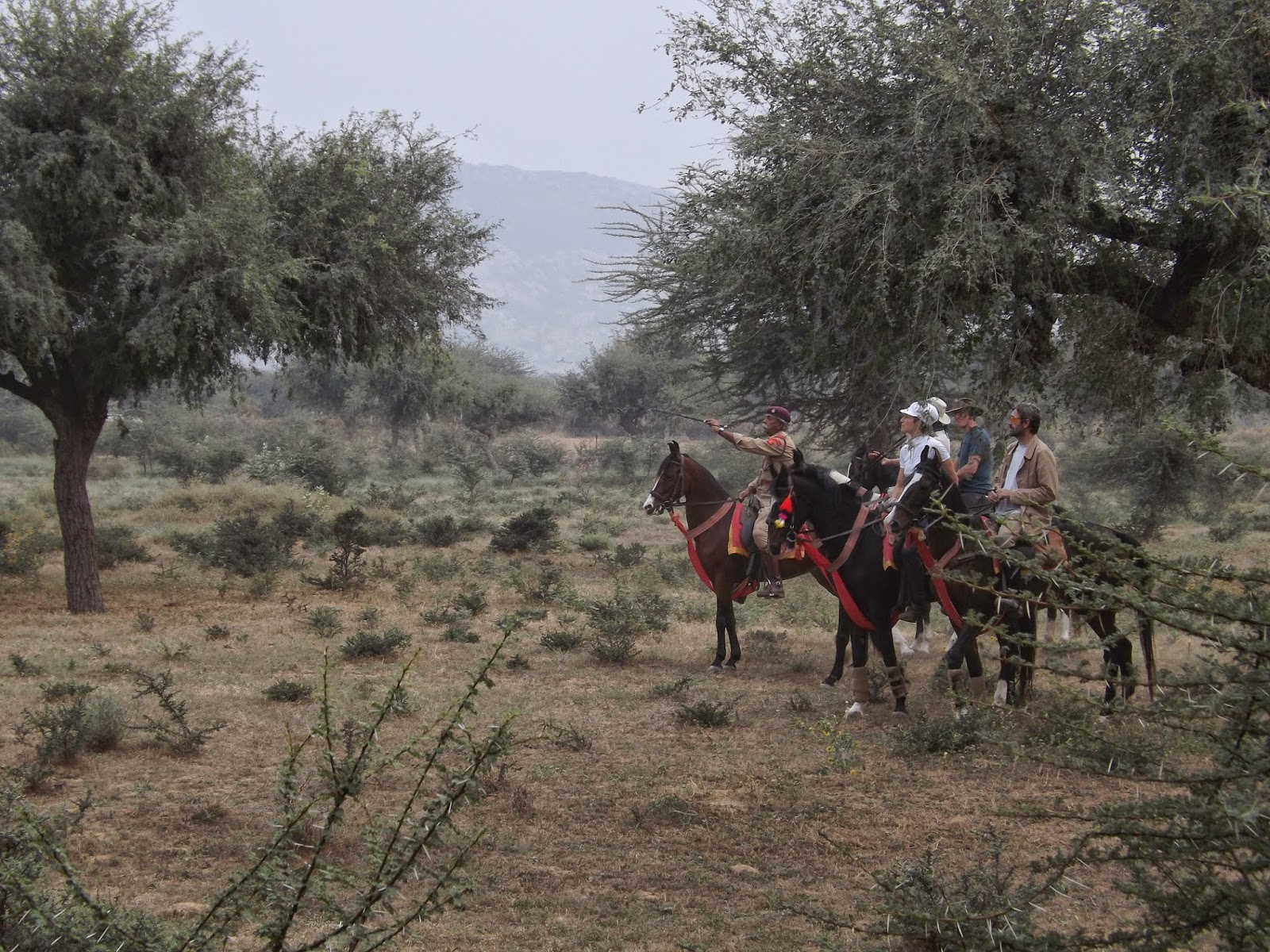 Each ride is personally guided by Bonnie, who is happy to explain anything of interest to the group.  With nearly 30 years of experience, he certainly knows what he is doing!  Each ride is unique in the route it takes because there are no trails here.  The ride crosses fields and villages, and Bonnie has to adjust his route each time to circumnavigate farmers’ crops, newly fenced areas, and other obstacles. 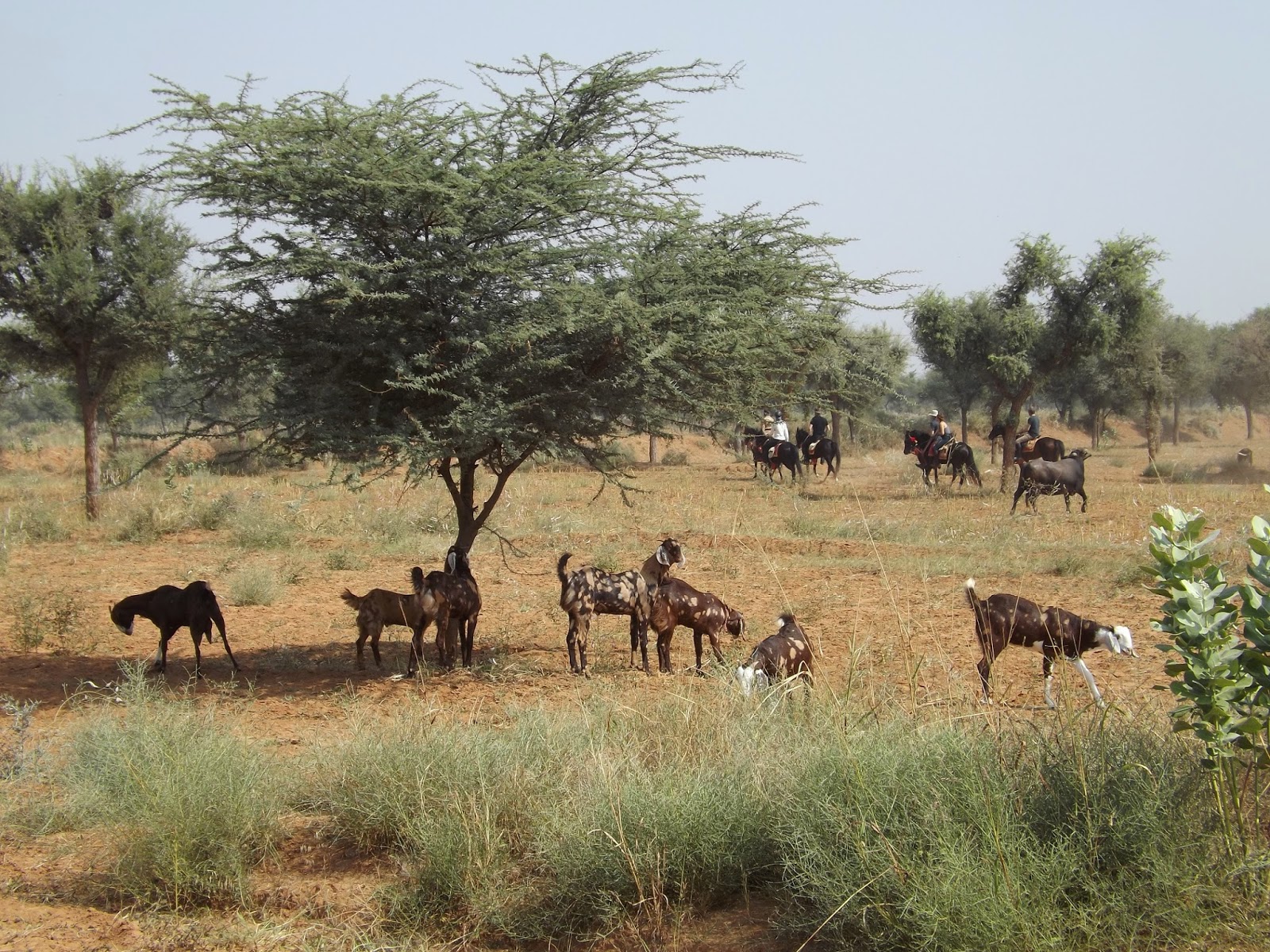 The first safaris during my stay here left from Dundlod and wound their way south to end in a historic battlefield.  The scenery was pretty, with sand dunes covered in thorny trees and shrubs, grazing livestock accompanied by shepherds, and the occasional village. 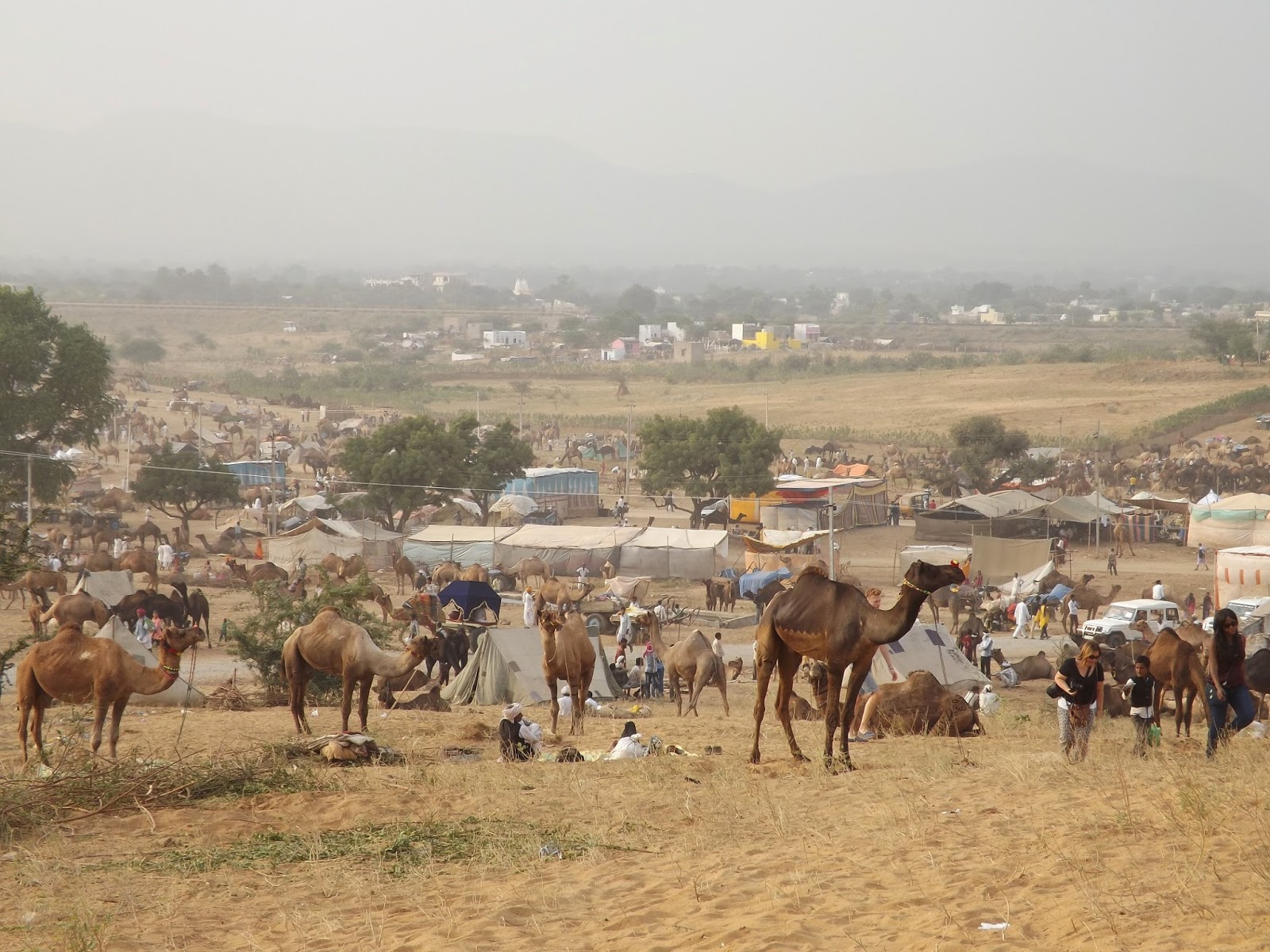 The best of the safaris was the last one, which began at the Pushkar Camel Fair.  The Fair alone was worth a whole blog.  What a sight! Thousands of camels, in fields as far as the eye could see.  Hundreds of horses, cows, and other livestock.  Vendors for everything imaginable.  Food stalls full of interesting treats.  Plenty of tourist-oriented entertainment, as well, from camel rides to carnival rides to hot air balloons. And the best way to see it is to be part of it by riding a prancing Marwari right through the action. 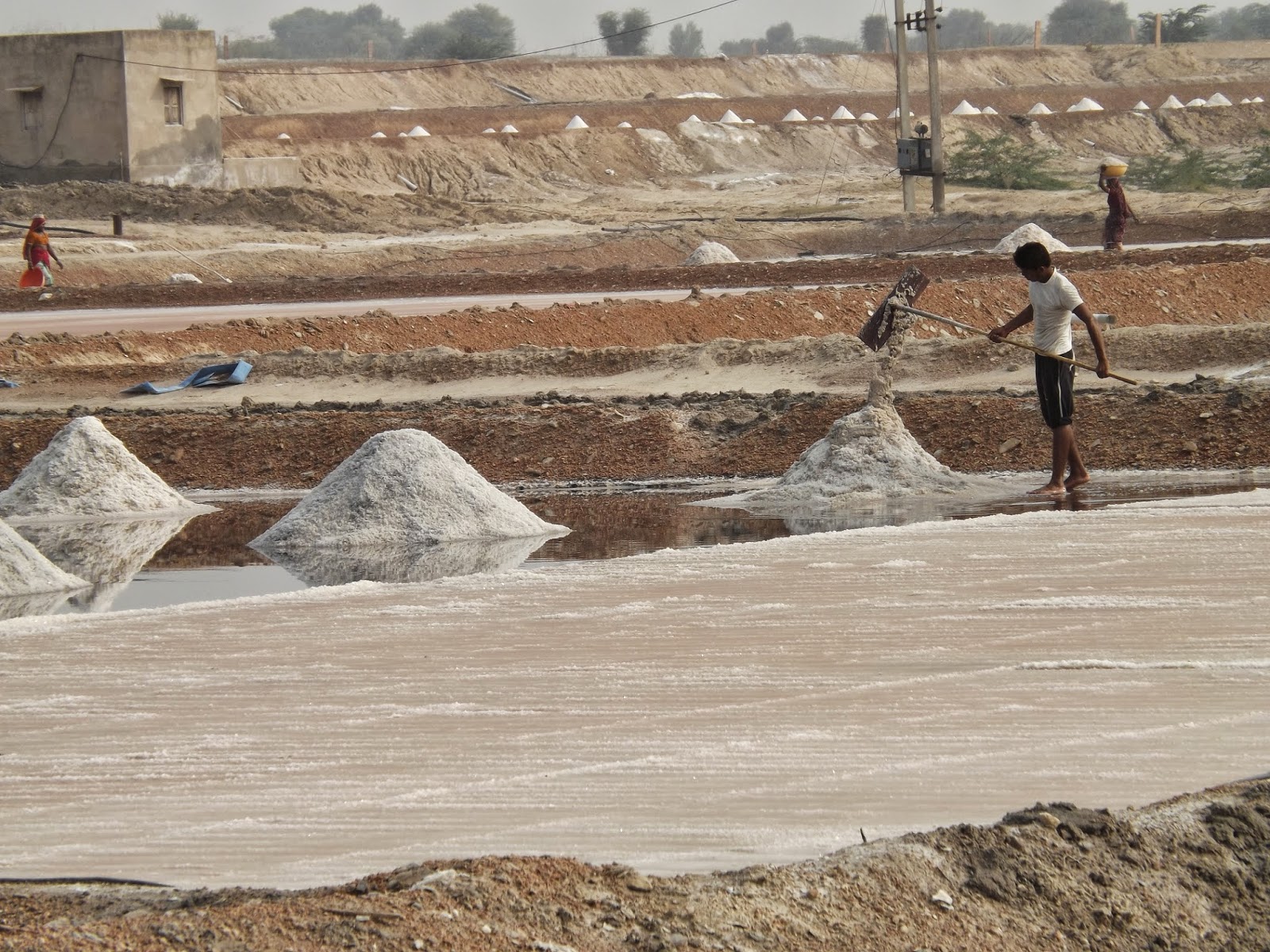 The Camel Fair was just the beginning of a fascinating trek. On our third night, we travelled to the biggest salt lake in Asia.  It is dry at this time of year, and so we camped out in the middle of it.  While lights could be seen on the horizon and trucks heard in the distance, they did not disrupt from the peaceful solitude of our campsite.  The next morning we travelled through the salt mines, which I found very interesting. 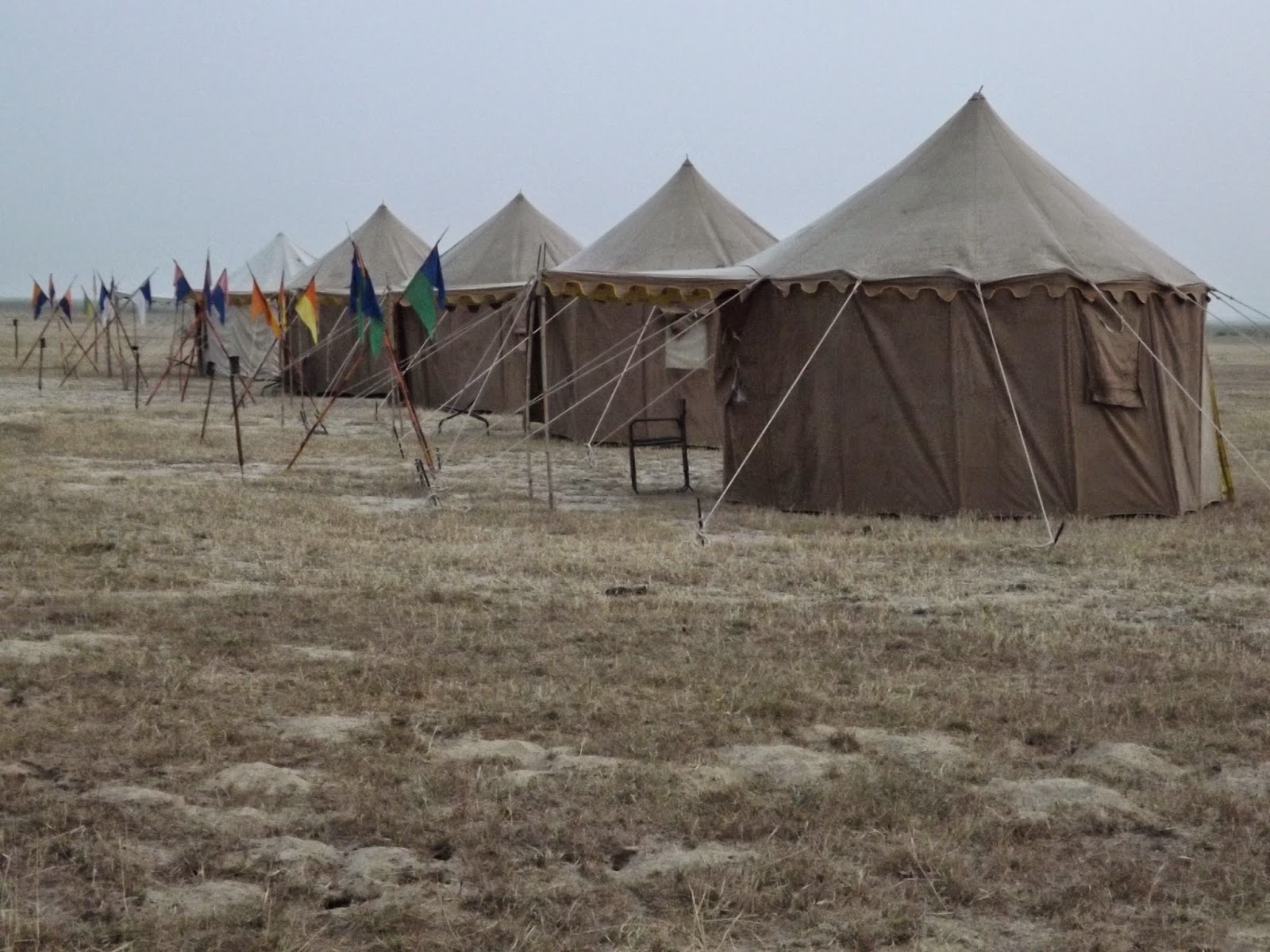 Our camp, which was our place of rest most nights, was splendid.  Bonnie’s clients have been “glamping” since before that was even a word.  Before the riders arrive, the crew sets up beautiful full-height tents, furnished with beds (not cots) with sheets (not sleeping bags), nightstand, mirror, candle for light, and carpeting for the ground. 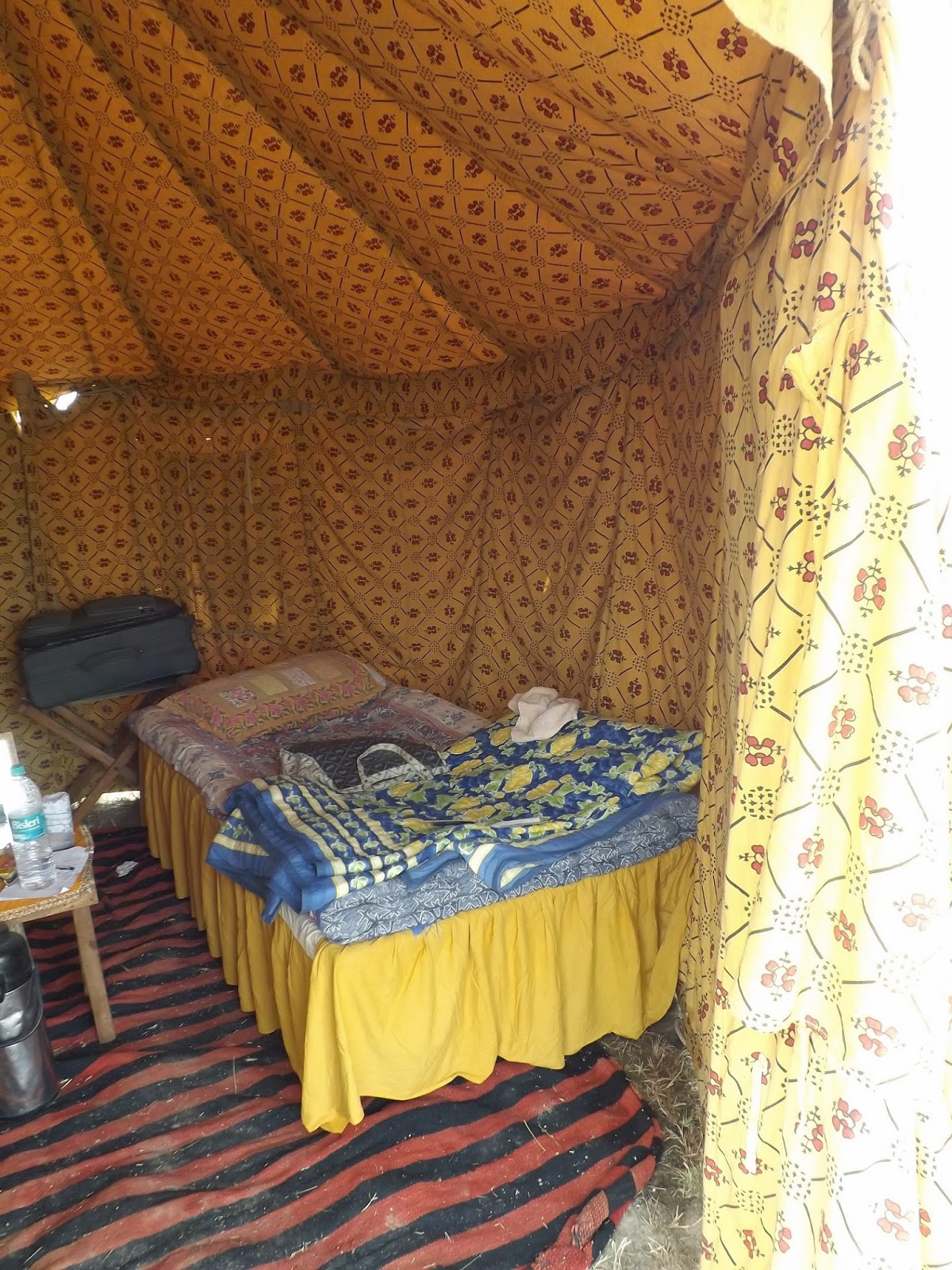 Subash, the magician in the kitchen, has a full array of stoves and other cooking essentials. so he can cook hot breakfasts and gourmet three course meals for lunch and dinner.  Meals are served on good plateware around the campfire.  The camp even has showers and a flush toilet! 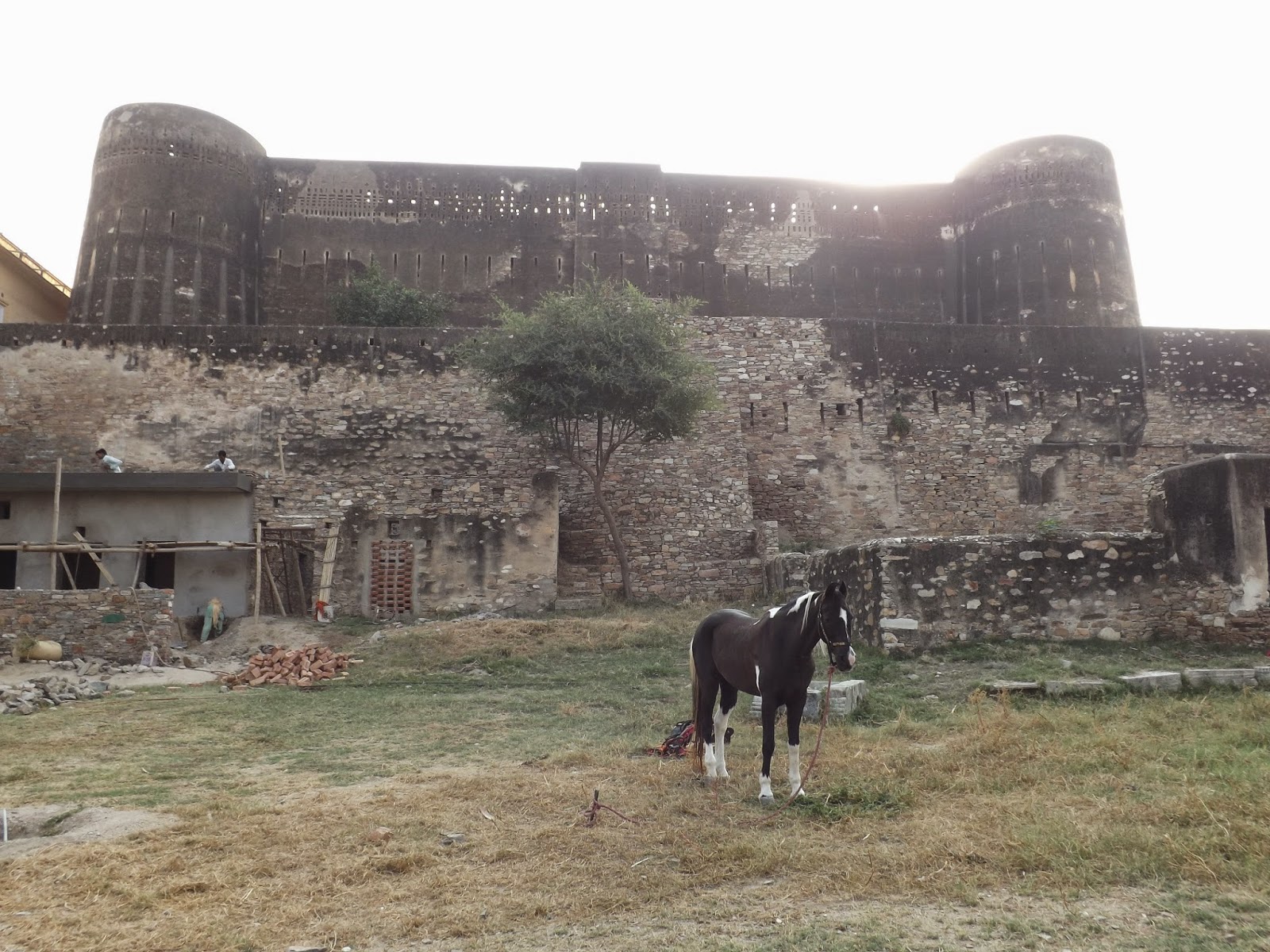 On nights that we didn’t camp, the hotels were historical and luxurious.  One night was at Roopingarh Fort, where the horses stayed in the older part of the fort and we stayed in the less-old palace within the fort. This fort’s claim to fame is that it is the only Rajasthani fort to contain a Muslim shrine. 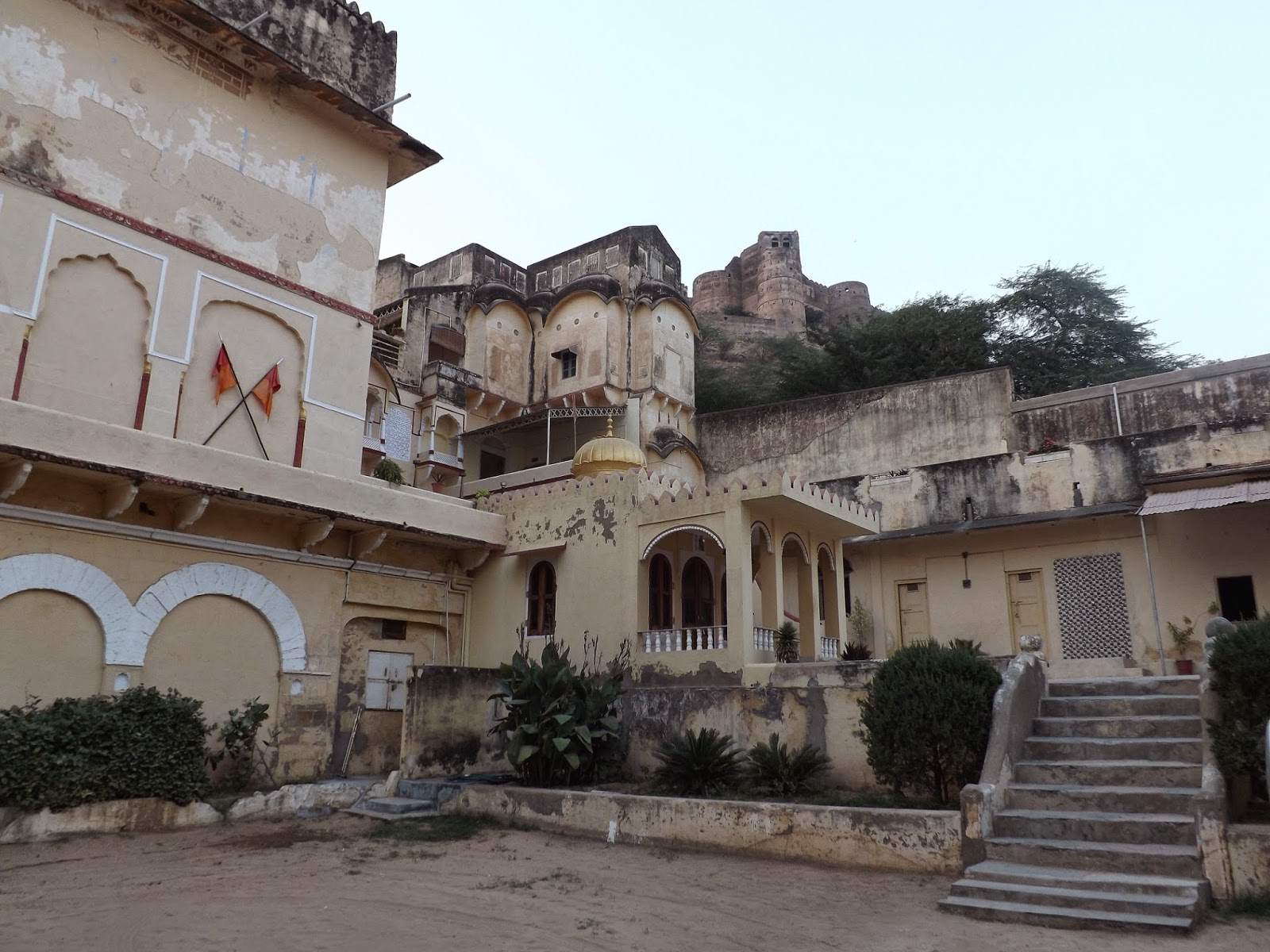 The last night was in the Danta Fort, which is owned by Bonnie’s brother and was built in a similar style to Dundlod Fort.  However, this fort also has an older section on top of the hill which has more or less been abandoned.  I hiked to the top with the other guests to enjoy the sunrise; there were no trails so we had to scramble up the steep slope over slippery rocks and through thorny shrubs. The view was well worth the difficult climb! 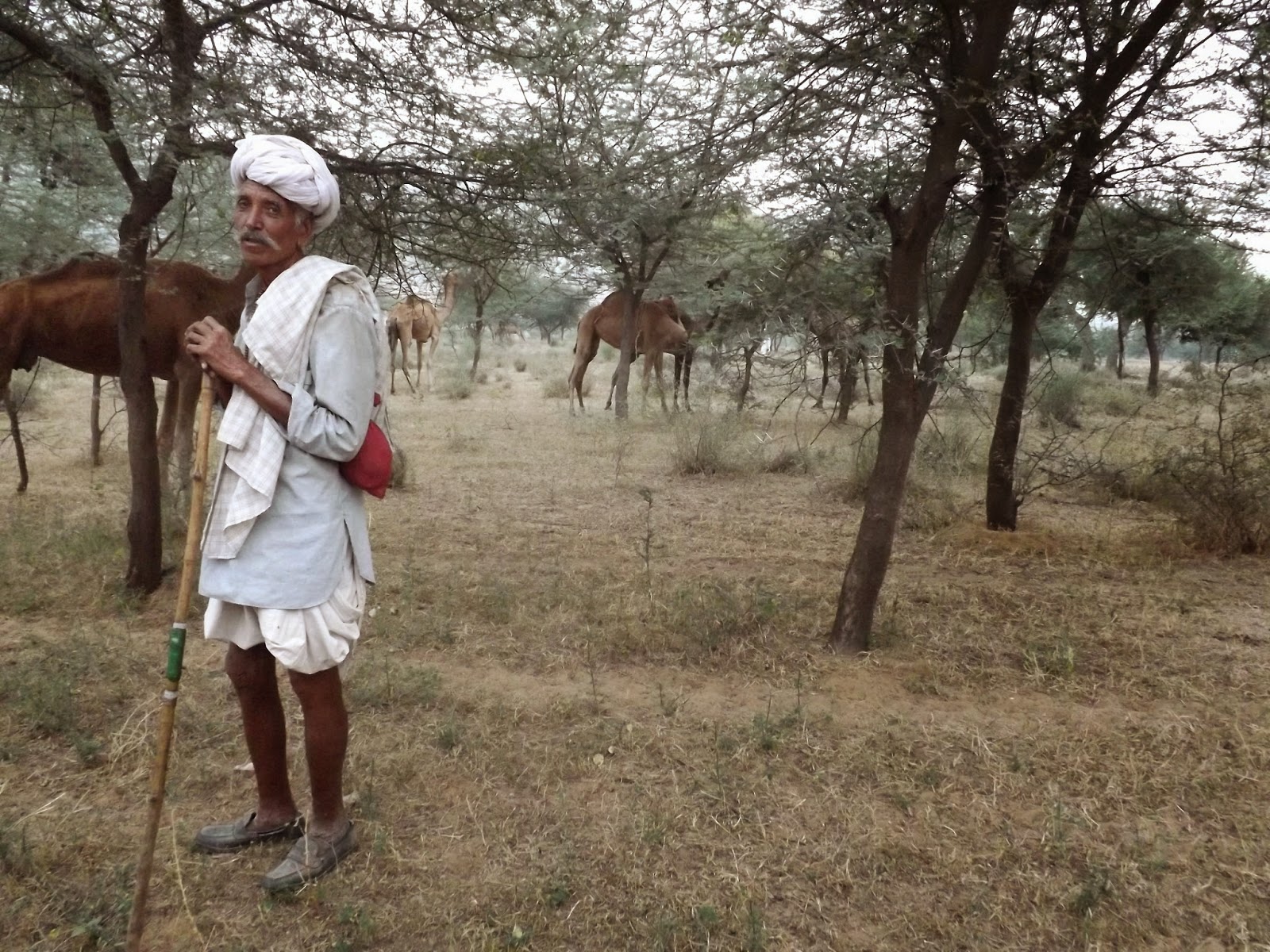 The best part of the safaris – after the horses, that is – is seeing parts of the country that tourists don’t usually go to, or can only catch a glimpse of when racing by in a car. 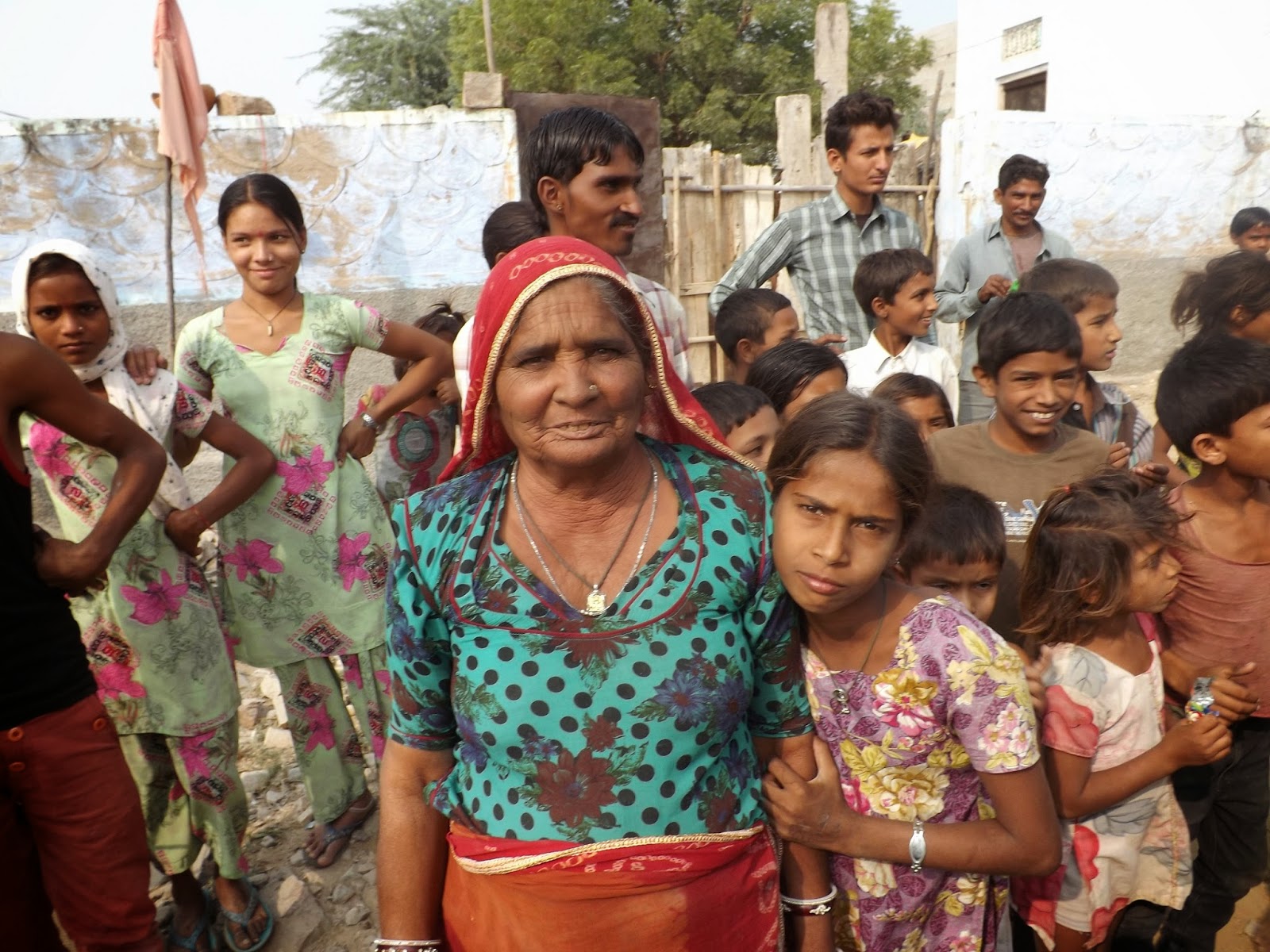 Not only does the scenery differ from the standard tourist fare, the people are also different.  They are excited to see the tourists, and everywhere we went there were always crowds of people waving from doorways, stopping their cars or motorbikes to take a photo of the riders, or curiously watching from the edge of camp.  The best time was when we tourists played charades one lunch time, and had over a dozen local people watching and laughing – I don’t know how much they understood our game, but they sure were enjoying it as much as we were!
Posted by Meredith Cherry on November 10, 2014